Accessibility links
Natural Gas May Be Easier On Climate Than Coal, Despite Methane Leaks Some scientists have argued that so much gas leaks out during production that it is actually worse for the environment than coal. But a new nationwide study shows that methane leaks from natural gas production aren't as bad as some feared. 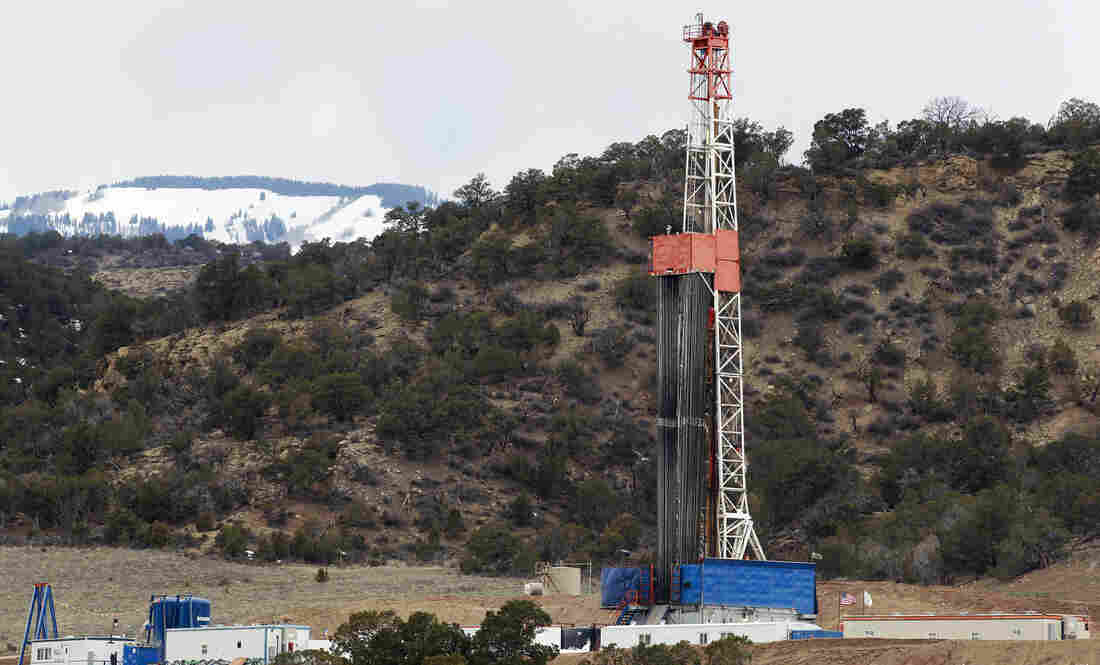 From the standpoint of global warming, burning natural gas can be better than burning coal, a study published this week suggests.

This is a contentious issue among people who are opposed to the natural gas drilling practice known as fracking. That technique involves injecting water, sand and chemicals into wells to release far more gas than conventional drilling can. Opponents of fracking have been concerned not only about local environmental issues, but also about the potential for methane leaks to make global warming worse.

Even though natural gas burns much cleaner than coal, the main constituent, methane, also leaks into the atmosphere during production. Methane is a potent greenhouse gas, so those leaks could potentially wipe out the climate benefits of natural gas.

And fracking technology took off before anyone really understood how much natural gas leaks out in the process.

"We wanted to go out and collect some of the first data on some of the new types of operations underway in natural gas production and what the methane emissions are," says David Allen, an engineering professor at the University of Texas in Austin.

Allen got funding from the Environmental Defense Fund, as well as support from nine major companies that volunteered to participate in the study. His conclusion: Currently the U.S. Environmental Protection Agency greatly overestimates methane emissions from a new well that is being prepared to produce gas for the first time. But he found that the EPA also greatly underestimates emissions from wells that are already in production. And when you add the whole thing up, it's basically a wash, Allen says.

That's potentially good news for advocates of natural gas, because it supports the argument that, if done right, natural gas production can be much better for the climate than coal.

The study appears in the Proceedings of the National Academy of Sciences, and suggests ways to make the production of natural gas cleaner than it is today.

For example, it turns out there's a lot of methane leakage from fracking operations that separate natural gas from oil and water as they come up the well at the same time.

"That was the biggest surprise for me, as an operator," says Edwin Hance from Pioneer Natural Resources, a natural gas company that operates mostly in Texas and participated in the study.

"I would say that's the primary area we need to focus going forward," Hance says, "as far as practices where we can have the opportunity to reduce emissions further."

It's important to note that the study relied on data from nine companies, all of which volunteered to be studied. Bob Howarth, a professor of ecology and environmental biology at Cornell University, says that means the results from the 190 study sites are not necessarily representative of the industry as a whole.

"I would view this as best-case scenario for what industry can do to reduce methane emissions when they want to," Howarth says.

A different study, published last month by the National Oceanic and Atmospheric Administration, may be more representative of a worst-case scenario. The NOAA study sampled the air in an entire basin in Utah, rather than tracking emissions down to specific pieces of equipment and specific practices.

"They're finding methane emissions that are 10 to 20 times higher than this new study," Howarth says, "and I think [that's] probably more representative of at least those western gas fields, when industry does not realize it's being watched."

Figuring out what practices are responsible for large methane emissions, like those in Utah, will take more work.

Steve Hamburg, chief scientist at the Environmental Defense Fund, says his organization is funding 16 studies to look at the entire natural gas system in the United States. The PNAS study, focusing only on production, is just one part of that.

"Regrettably, we need another year, and then we'll have all of these pieces together and we really can get a much clearer picture of what's going on," Hamburg says.

At stake isn't simply gas production in the United States. Natural gas is taking off globally. So Hamburg says these measurements offer producers and regulators an opportunity to fix what's wrong in the U.S. and to spread those best practices around the world.