Accessibility links
Earwax From Whales Keeps Record Of Ocean Contaminants Layers of wax in the marine mammals' ears can be read like tree rings, scientists say, recording a whale's age and also information about pollutants in the water the whale swam through. 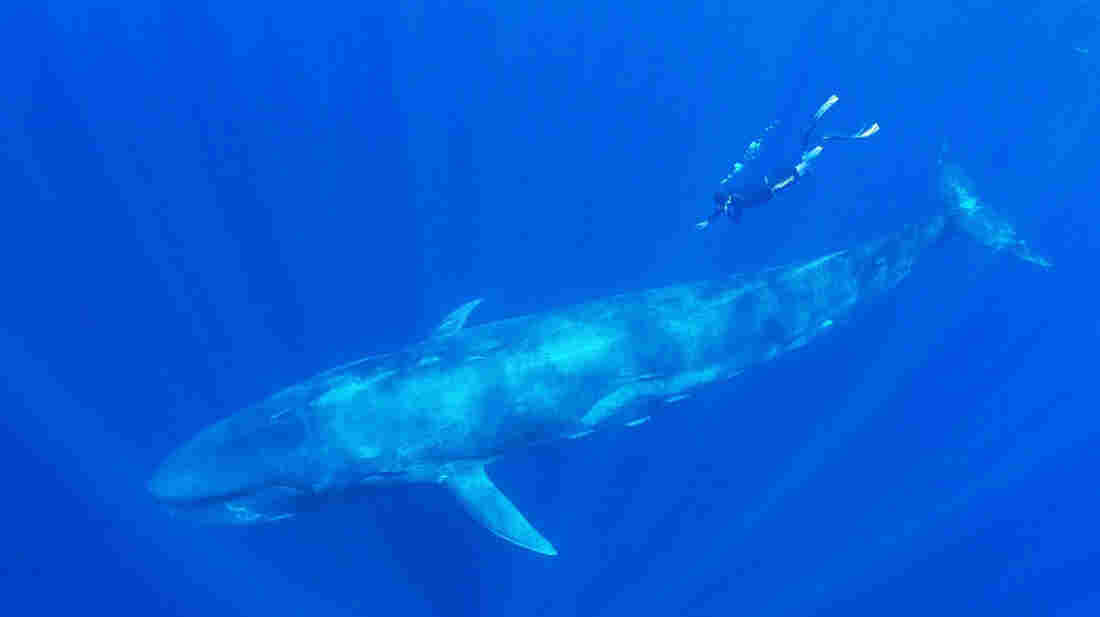 How often do whales clean their ears? Well, never. And so, year after year, their earwax builds up, layer upon layer. According to a study published Monday, these columns of earwax contain a record of chemical pollution in the oceans.

The study used the earwax extracted from the carcass of a blue whale that washed ashore on a California beach back in 2007. Scientists at the Santa Barbara Museum of Natural History collected the wax from inside the skull of the dead whale and preserved it. The column of wax was almost a foot long.

"It's kind of got that icky look to it," says Sascha Usenko, an environmental scientist at Baylor University who was involved in the study. "It looks kind of like a candle that's been roughed up a bit. It looks waxy and has got fibers. But it's pretty rigid — a lot stronger and a lot more stable than one would think."

There are light and dark layers within the column, each layer corresponding to six months of the whale's life, Usenko says. Historically the rings have been used to estimate the age of the whale, he says, "very similar to counting tree rings."

But age is not what Usenko was after. He studies how chemical pollutants like DDT and flame retardants are affecting whales. These pollutants get deposited in fatty tissues, such as whale blubber. And scientists often analyze blubber to see what whales are eating.

But analyzing blubber has a limitation, Usenko says.

"I would only know that organism — that [particular] animal was exposed to those contaminants," he says. "I wouldn't know when."

And so he thought, why not look at earwax, which is also a fatty material that accumulates toxic chemicals.

Because each layer of wax corresponds to six months of a whale's life, by working through a plug of wax, Usenko could figure out when the animal was exposed to a particular chemical.

In this case, Usenko and his colleagues found that the whale had been exposed to worrisome pollutants throughout its lifetime.

He says the high levels of DDT surprised him.

"It's been 30-plus years since we've stopped using this compound," he says, "but to still see it showing up at such high concentrations — one of the dominant chemicals we see — was surprising."

Usenko and his team also determined that "a significant percentage of the exposure occurred in the first, early stages of the animal's life," when it was still nursing, and perhaps especially vulnerable. At that point, the pollutants came from the mother, through her milk, the scientist says.

Usenko says he can't tell just from looking at the wax whether these chemicals are hurting the development of young blue whales. He studied only one animal, and the earwax alone can't reveal whether the chemicals caused harm.

But the earwax also contained a record of fluctuations in stress hormones throughout the animal's life. And that, in combination with the chemical pollution data, may in the future provide better insight into the potential impacts of these chemicals on whales, Usenko says.

His current findings appear in the latest issue of the Proceedings of the National Academy of Sciences.

But he needs more data, he says, so he has requested that scientists start collecting earwax from dead beached whales the world over and mail the samples to him.