Accessibility links
After Attacks, Seattle Rethinks How To Treat Mentally Ill Before the Navy Yard shooting, a spate of killings and assaults by mentally ill transients unnerved Seattle residents, prompting questions and discussion. This week's tragedy in Washington, D.C., has added extra energy to that debate. 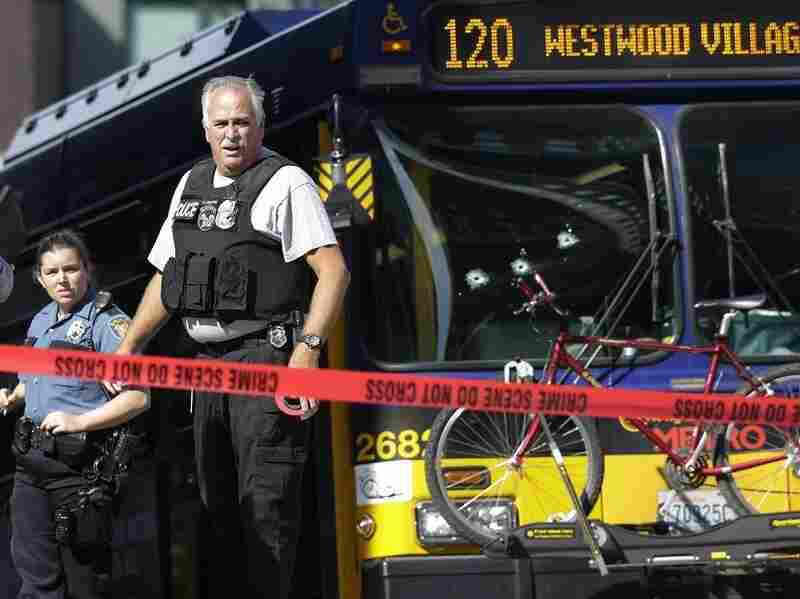 Police officials stand next to a bullet-ridden Seattle Metro bus on Aug. 12. A man with a history of mental illness shot and wounded the driver, then died in a chaotic shootout with police. Ted S. Warren/AP hide caption 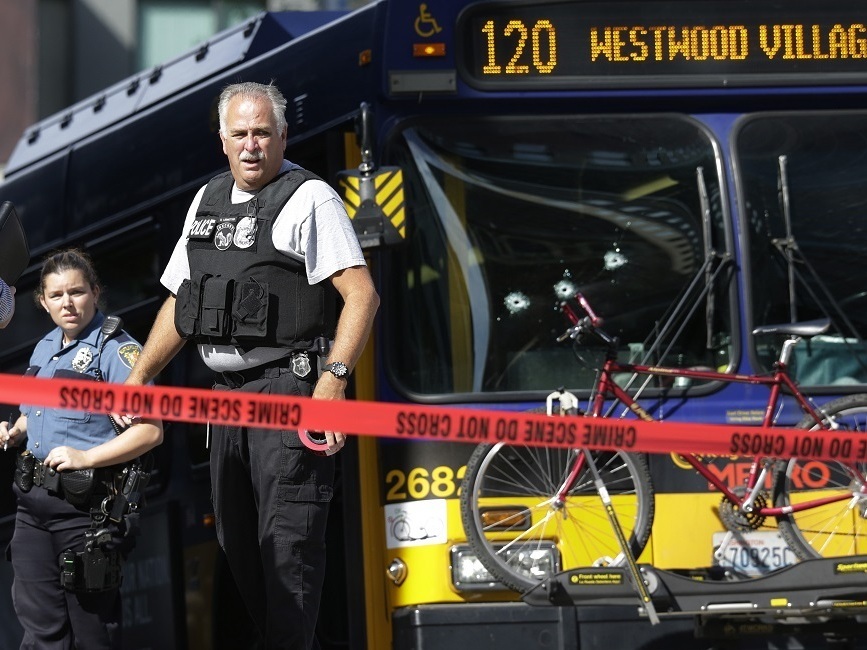 Police officials stand next to a bullet-ridden Seattle Metro bus on Aug. 12. A man with a history of mental illness shot and wounded the driver, then died in a chaotic shootout with police.

The Navy Yard massacre may renew concerns over the potential dangers of mentally ill people who don't get treatment. That issue is especially hot right now in Seattle, where the mayor has called untreated mental illness an "emergency."

Seattle's Pioneer Square is an uneasy mix of art galleries and skid road; it's gelato over here, and heroin over there. And then there's mental illness.

"It's scary," says James Nevin. He says he sees it every day. "There's one guy, man, I walk by him all the time and this guy says the most heinous things I've ever heard ... and then I'll see him a few hours later and he's got the sweetest personality and disposition you could ever possibly have."

Unstable people have made downtown Seattle jittery lately — for good reason. In August, a man with a history of mental illness shot and wounded a bus driver, then died in a chaotic shootout with police. And just last Friday night, a self-identified schizophrenic attacked a couple with a knife, wounding the woman and killing her boyfriend.

"This isn't the first time this summer we've seen someone with a mental health issue," Seattle Mayor Mike McGinn says.

On Monday, even as news was coming in about the massacre across the country, McGinn acknowledged the growing nervousness.

"I do not want to stigmatize people with mental health issues," he says. "Very, very few are violent. But when someone is violent, we have to have the ability to identify that, provide services and potentially isolate them, so that they cannot harm themselves or others."

Who Was Aaron Alexis? Records Offer Clues Of Instability

Washington state ranks low in its per capita supply of psychiatric hospital beds and there have been cuts to outpatient mental health care, too. At the same time, lawmakers have made it easier to get someone committed — at least temporarily.

Amnon Shoenfeld, director of mental health for Seattle's King County, says if someone has a psychotic episode on the streets, the cops will pick him up. The problem is, with the shortage of psychiatric beds, that person often ends up parked in an emergency room.

"You'll have somebody who's being held for involuntary commitment, probably in restraints, on a gurney next to someone who's come in to the emergency room probably for a broken foot," Shoenfeld says.

The situation in Seattle is just the latest chapter in a national story that started 50 years ago, when America began de-institutionalizing the mentally ill.

The Treatment Advocacy Center tracks what it sees as the human cost of this policy, in an online database of "preventable tragedies."

"If you look at the 12 worst, the deadliest shootings, in our history, six of them occurred in the last decade," says Doris Fuller, head of the organization. "And of those, Virginia Tech, Sandy Hook, Aurora appear easily associated with mental illness."

Fuller argues that de-institionalization went too far, that it's time to fund more hospital beds, more treatment — and, when justified, to compel that treatment.

The argument isn't without controversy; there's a fear it could lead back to the bad old days of warehoused patients, forced by the government to take psychotropic drugs. But right now, in places like Seattle's Pioneer Square, there's a growing sense that it's time for the pendulum to swing back a bit in that direction.