Accessibility links
Interview: Daniel Craig on Broadway, 'Betrayal' And Beyond The actor joins NPR's Robert Siegel to talk about an upcoming revival of the 1978 Harold Pinter play. In the show, directed by Mike Nichols, Craig is acting with his real-life wife, Rachel Weisz — but he says the two don't talk about it outside the office. 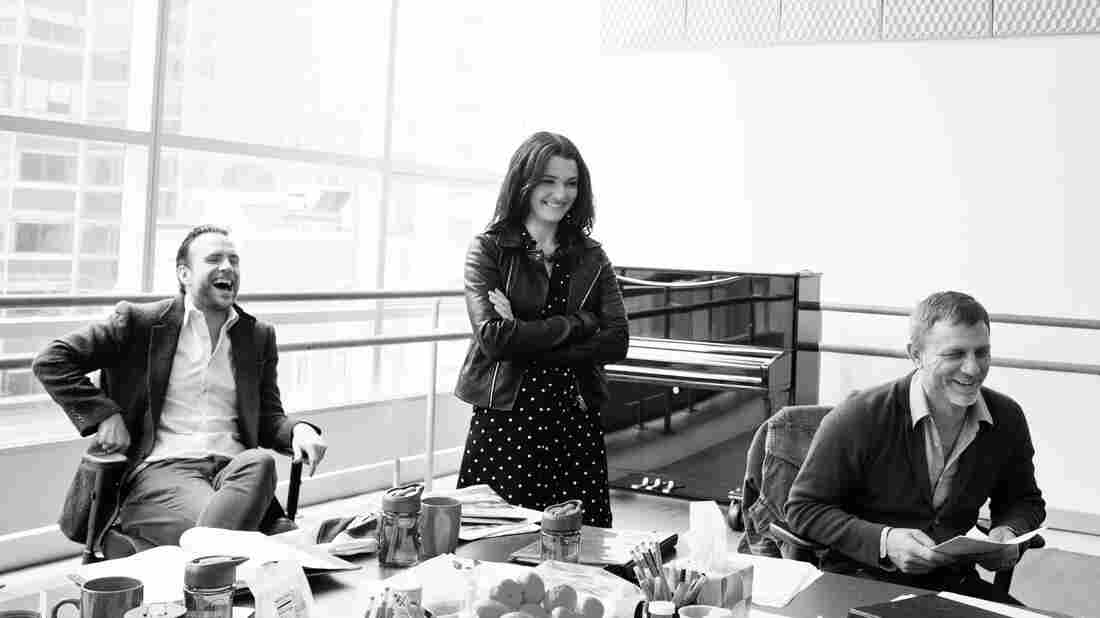 Daniel Craig, at right, is probably best known as the current incarnation of James Bond. He's in rehearsal now for a Broadway production of Harold Pinter's Betrayal, alongside Rafe Spall and Rachel Weisz — who plays his wife, and is that in real life, too. Brigitte Lacombe/ hide caption 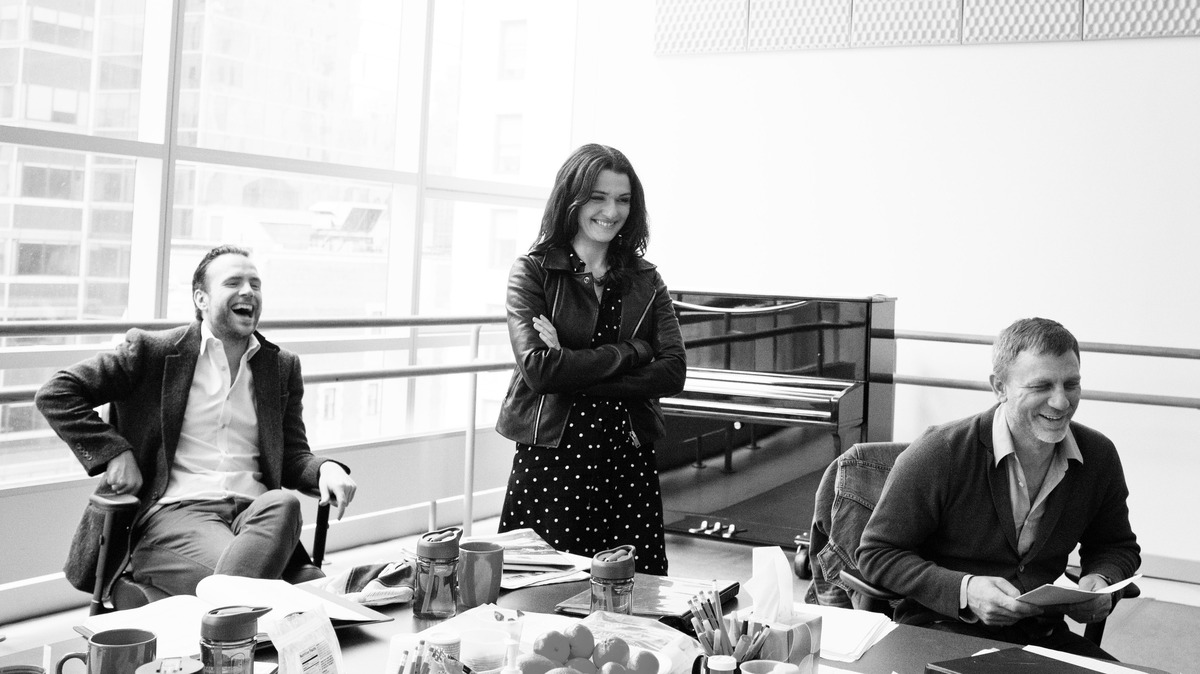 Daniel Craig, at right, is probably best known as the current incarnation of James Bond. He's in rehearsal now for a Broadway production of Harold Pinter's Betrayal, alongside Rafe Spall and Rachel Weisz — who plays his wife, and is that in real life, too.

A revival of Harold Pinter's play Betrayal is in rehearsal now in New York. It's the story of an affair, and it unfolds backward in time, from the lovers sharing a post-romantic drink to the passion they first experienced seven years earlier. Along the way, much deception — betrayal, even — is revealed.

Daniel Craig, who stars as the jilted Robert, tells NPR's Robert Siegel that the show, first performed in 1978, still feels "surprisingly contemporary. ... When you have someone as good as Pinter, it remains timeless. And the themes are timeless. It's just good writing."

The men in the story are Oxbridge literati — denizens of a culture familiar to Craig's co-star and real-life wife, Rachel Weisz, but not the sort the actor himself, who left school at 16, would have run with.

"It's as far away from me as possible, I suppose," the actor acknowledges — though he notes that he did eventually go to college to study acting, a career he knew pretty early on he wanted to pursue.

"Very early," he stresses. "Just the desire to dress up and show off — which is still with me. [It] got me when I was probably about 4 or 5, I think."

Craig also notes that the production, directed by Mike Nichols and co-starring Rafe Spall as the man Weisz's character has the affair with, features at least one implication — based on a line about who should have cheated with whom — that wasn't in the original staging.

"[Pinter] said there's no homosexual overtones at all in the play," Craig says. "But obviously we're throwing loads in. Just to let you know." 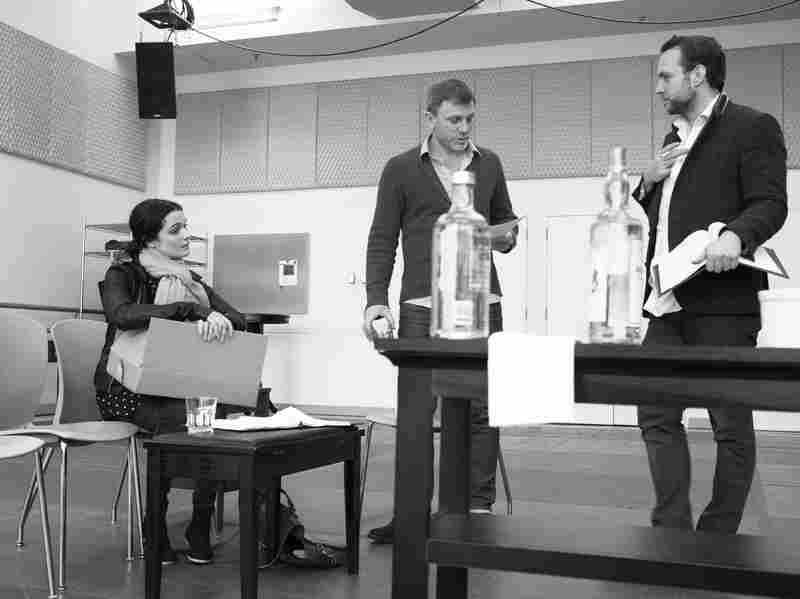 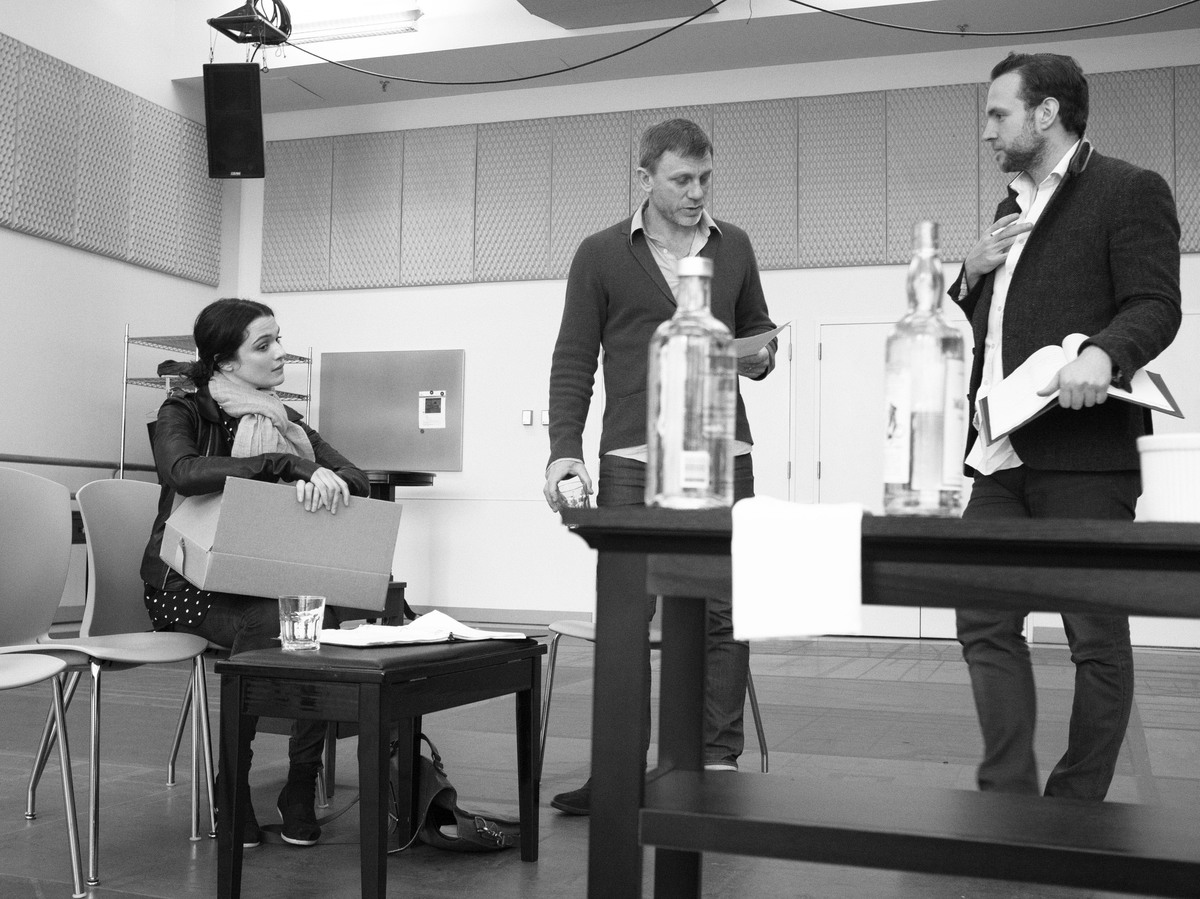 In Betrayal, Robert (Craig) finds his marriage endangered when Emma (Weisz) has an affair with Jerry (Spall).

On acting opposite wife Rachel Weisz

What's interesting about the play is that it's very intense, and a very intense thing to do, but we manage to go home and just sort of leave it there at work. I think otherwise it would be too difficult to do. ... We don't talk to each other about it, no. We separate about it. You know, she gets on with her thing, and I get on with my thing. And we decided to do that because it's important to be separate entities when you're at work.

On having the luxury, post-Bond, to pick and choose parts

Yes. I mean, it doesn't make my choices good, though. I wish it could give me taste. But you kind of go with your heart, and I think that's the best thing to do. Certainly in my case, in making choices about the work I want to do. Do I like it? Do I love it? Do I like the people involved? Then it's a no-brainer.

On why he decided to do Betrayal

The cast. The director. The play. I mean, too many good things. Another chance to go back to Broadway — which is on one hand incredibly scary, and on another just an exhilarating thing to do. Broadway audiences are just like nowhere else on Earth.

On performing live every night

I mean, standing up in front of people and pretending to know what you're talking about is hard enough in any profession. It's just a big deal, certainly for the first couple of weeks; it's like a very foreign place. And hopefully then it settles down, and you can start feeling kind of comfortable with it and making it better — and continue to make it better as the run goes on.