Accessibility links
Stuck In Poverty Amid Signs Of Recovery The U.S. poverty rate has remained at about 15 percent for the third year in a row. Despite signs of an improving economy, getting out of poverty continues to be a challenge for many Americans. 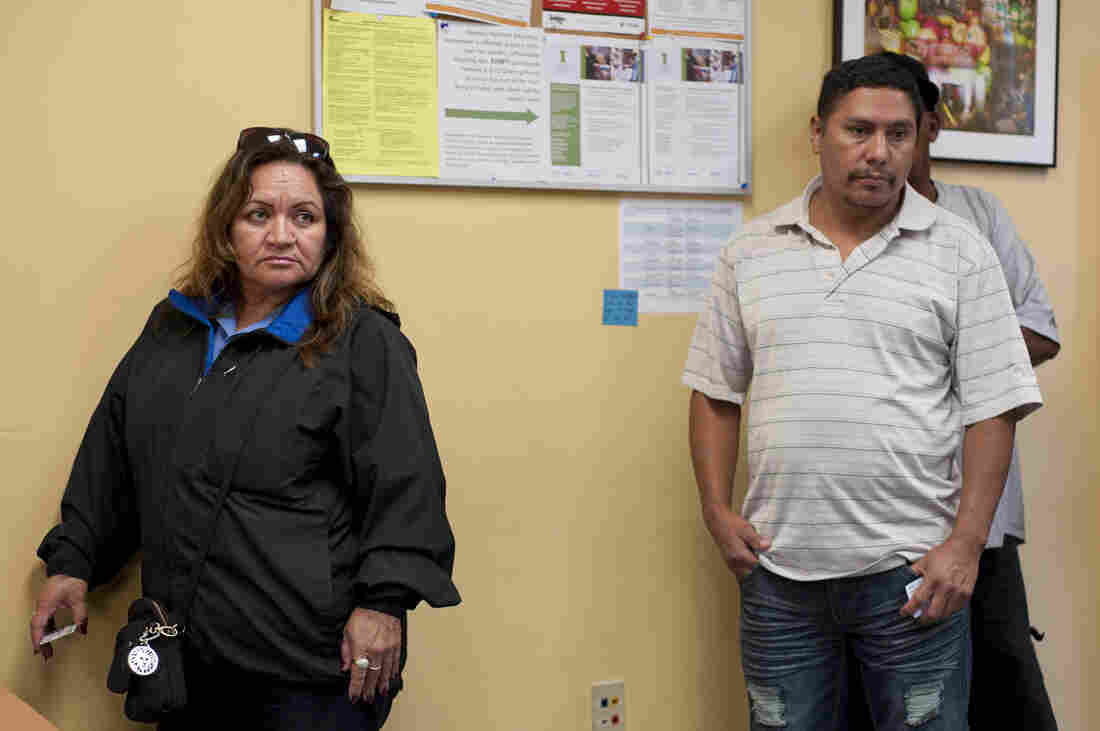 For the third year in a row, the poverty rate has remained stuck at about 15 percent. Nearly one in six Americans was living in poverty in 2012, according to a new report by the Census Bureau. Despite a slow-moving economic recovery, these latest numbers show that for poor Americans, there are few signs of any recovery.

Fatima Goss Graves, who tracks poverty and employment stats at the National Women's Law Center, called the poverty numbers a "disaster." She's seen the same dynamics facing the most vulnerable group in the American economy since the end of the recession.

That group, according to the Census Bureau, includes more than 46 million people living at or below the poverty line, which the federal government defines as a family of four making $23,283 a year or less, not including government benefits like food stamps. 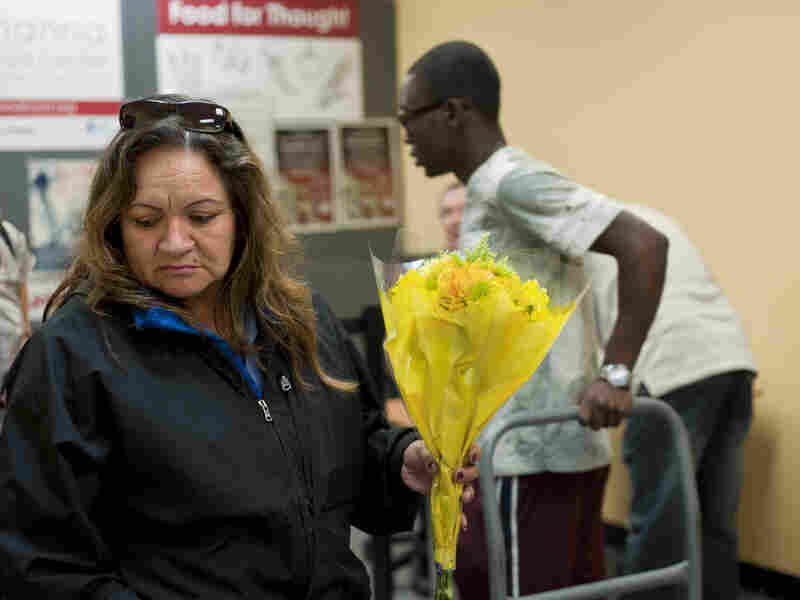 Judith Prado picks a bouquet of flowers to take with her other donations from the food pantry. Chloe Coleman/NPR hide caption 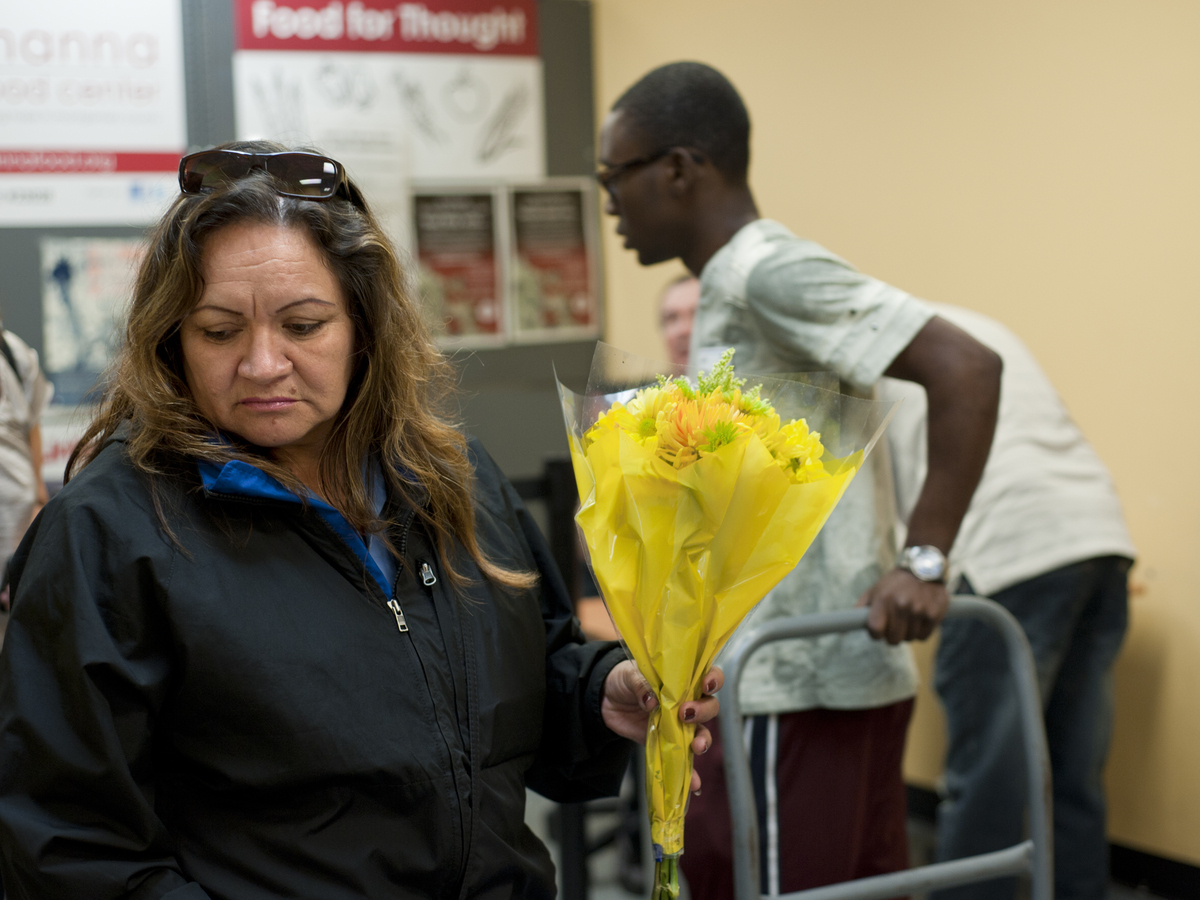 Judith Prado picks a bouquet of flowers to take with her other donations from the food pantry.

While there have been signs of a recovery, Graves says their benefits have not yet reached the bottom of the economic ladder.

"The recovery for many people has looked very different. The jobs that are coming back are some of the lowest paying jobs," she says.

Many jobs created since the end of the recession are in retail and food services and often do not pay enough to support families. Middle-income jobs that were once lifelines out of poverty have become more scarce, making it even more difficult for groups with some of the highest rates of poverty, including Latinos, African-Americans and single mothers.

Graves says in today's economy, having a job doesn't necessarily mean you're not scraping by.

"Even when women are working full-time, they may still be in poverty," she explains. "Even as the economy is doing better, women are not doing better."

In a suburban industrial park in Gaithersburg, Md., just outside the nation's capital, workers push a stacked cart full of snacks and produce through the Manna Food Center, a local distribution site for food donations where Yelba Mojica meets daily with struggling families.

"People that have never needed the food are coming to [Manna Food Center] and [asking], 'What do I have to do to qualify?' " Mojica says. "You see a lot of different people. You know, you see all walks of life who have never needed it in the past and all of a sudden, they do."

Judith Prado, a bus driver and single mother of three, never imagined waiting in line at a food pantry — until nine months ago, when her hours at work were cut and she had to choose between gas for her car or food for her family. 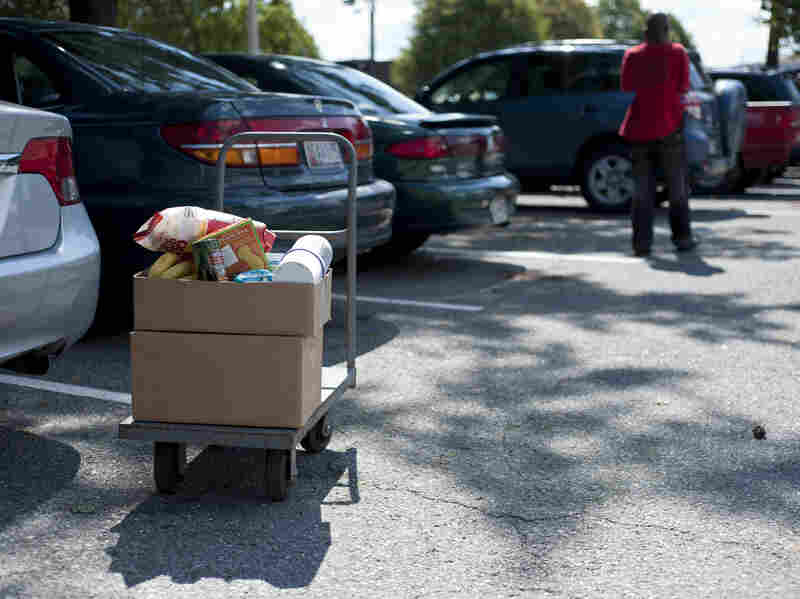 Food distributed by the Manna Food Center is packed in cardboard boxes to be loaded into clients' cars. Chloe Coleman/NPR hide caption

In between driving shifts, she stands in line for more than a hour at the food pantry to collect her monthly supply of food.

"I came early [to wait in line] because I have to go back to work. If I came late, I'm not going to be able to go to work," Prado explains.

Prado falls below her county's self-sufficiency standard, an alternative to the federal poverty line that Manna Food Center uses to determine income eligibility. She says she's grateful for the help from the food pantry — two cardboard boxes stuffed with bananas, frozen waffles, and other food items that "maybe" will last her family two weeks.

Then she'll have to wait another two weeks before she can be in line again next month.