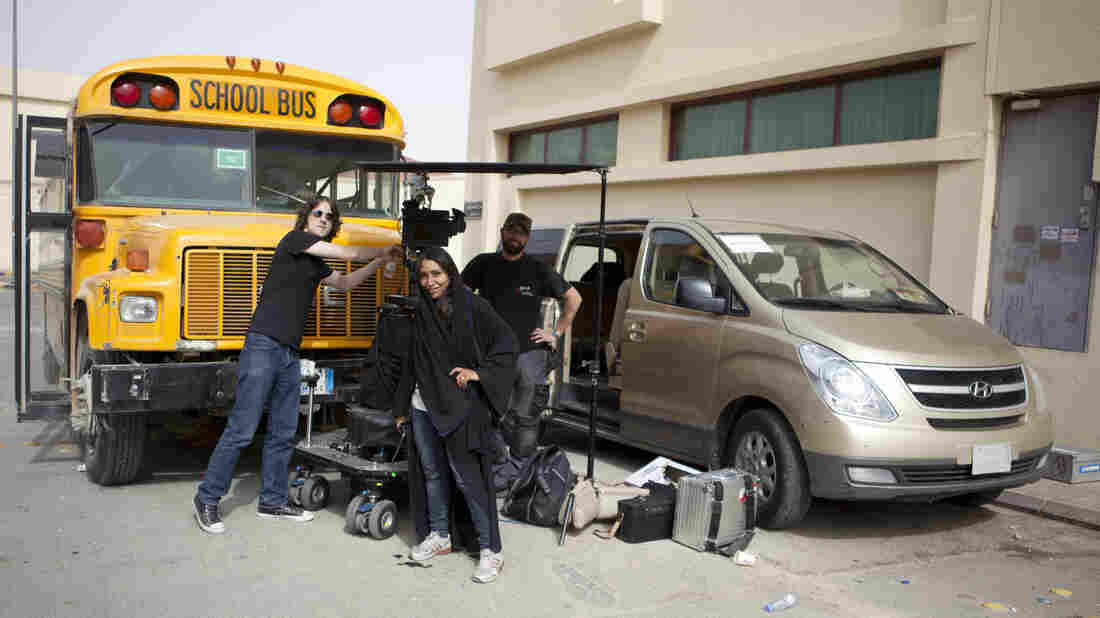 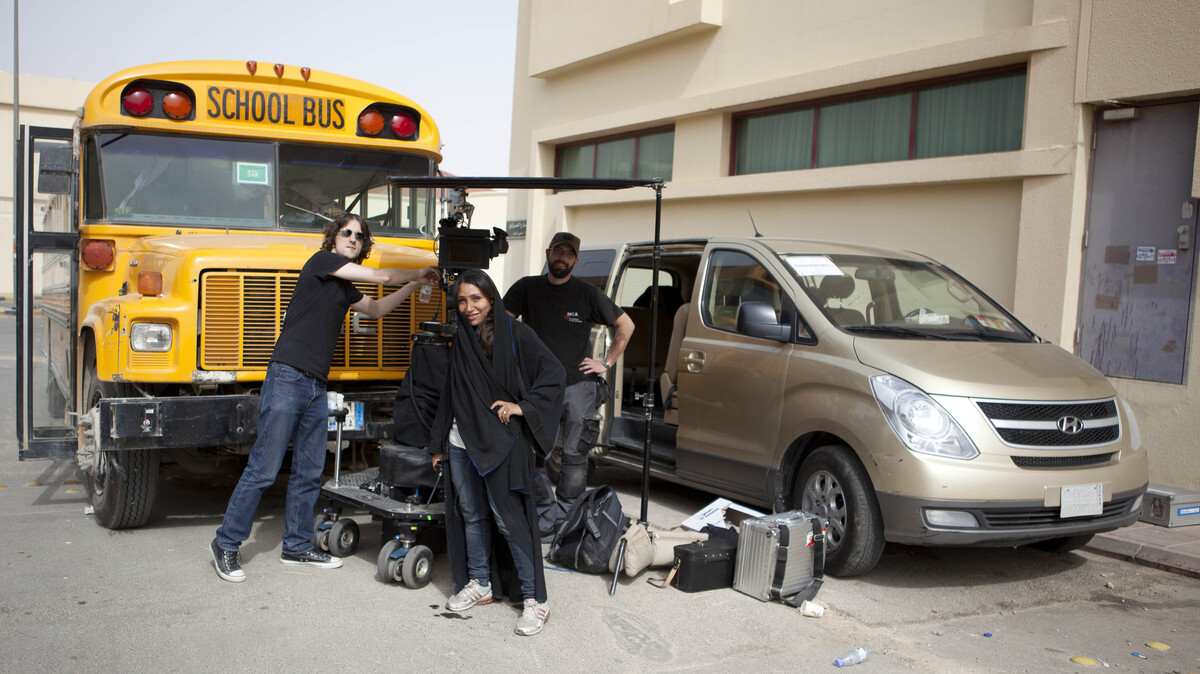 Women aren't permitted to travel unattended in the streets of Saudi Arabia, so Wadjda director Haifaa Al Mansour worked from inside a van, communicating with her crew via walkie-talkie.

Wadjda, being touted as the first feature film shot entirely in Saudi Arabia — a country with no movie theaters and a relationship with cinema that's complicated at best — tells the story of a defiant 10-year-old pushing back against the social expectations that define her life as a young Saudi woman.

Wadjda's source of independence comes in the form of a green bicycle she wants to buy for herself. But girls in Saudi Arabia don't ride bicycles, so she has to be creative.

Director Haifaa Al Mansour tells NPR's Rachel Martin that she wanted to make a film "that mirrors reality as much as possible."

"I couldn't make a film where women are all innocent and they're all striving to be free and all that; it's not real," she says. "I think a lot of women are the gatekeepers, a lot of women reinforce the values ... For me, it was not making women all the victims, and men are the oppressors."

On the character Wadjda

I think she's a kid and she's just discovering the society around her. She's discovering what she can do and what she cannot do. And I think she wants to race a boy, she wants to — you know how kids are, competitive — she wants to win. She wants to assert herself and be heard. But she's not trying to be aggressive as much as assertive. She's trying to find herself, to enjoy life, and for me that was a very important theme in the film. It is not about excluding anybody else or challenging anybody else. It is about finding happiness, pursuing a dream, and stuff like that.

On the logistical hurdles of shooting in Saudi Arabia

Saudi is segregated, and women are not supposed to be outside, and all that. So whenever we would shoot our outdoor scenes, I would be in a van, and I would sit with a walkie-talkie and a monitor ... It was tough; it was very frustrating to be in that confined space. But it was rewarding.

On why she didn't work more publicly, as a statement

It wasn't part of the statement I was trying to make. I wasn't trying to clash with people; I was trying to make a film. And I know people, if they see me, they will get offended, or people will come question [us] and try to stop us. I don't want to provoke people. I'm making a film in Saudi Arabia — I'm a woman — about a young girl who wants a bicycle. That's enough. I don't have to push it.

On why she filmed there, rather than in Jordan or Qatar or another less restrictive country

I think it is very important to open up Saudi and have new imagery coming from the kingdom. Nobody knows [what] it is like to be in Saudi, and for me it is important to create that ownership — even for people in Saudi, when they see the neighborhoods and all that. And one day we did some cultural screening in Saudi, and we invited a lot of Saudis and young kids. And one of them came to me, and he was really emotional and told me, "I understand, I feel how Americans feel now when they see an American movie." And it was amazing. It made me almost like, "Ah, I'm gonna cry."

On shining a light on Saudi culture

I wanted also to make a film that is happy. A lot of people who make films from the Middle East, [they are] almost like a horror movie when you go. And it makes me very uncomfortable watching a film like that, and I feel helpless. I feel like a victim.

I wanted to make a film that when I see it, I feel powerful. And I think it's time now in the Middle East to bring films of that type. It is a hard, tough time now in the Middle East, and it is up to people to change things — if they really change at heart. Not only by changing regimes and political stuff, but also by believing in women. By believing in others and becoming more tolerant, more respectful for other cultures. ... It is time to open up the culture.

On casting Waad Mohammed as Wadjda

I found her one week before principal shooting. And you know, there's no scientific method for casting; we have to rely a lot on word of mouth and who knew who, and all that. So it was hard. And every time we find a girl who's a little bit like, maybe she has the spirit ... her parents will call us and say, "No, she has school." And they are very reluctant to be in a film like this. But [Mohammed] came in really carefree, with jeans and everything. And I wanted her to sing, because there's the singing and recitation [in the film]. And she sang beautifully — [to] Justin Bieber, with perfect English.

On working with her juvenile lead actors

It was really nice, really nice to see the script come to life ... I enjoyed working with the kids, with [Abdullrahman Al Gohani, who plays Wadjda's friend] Abdullah as well. And he speaks English ... He translates for her, and she teaches him how to be street savvy ... They were excited, because they are part of something that doesn't happen anywhere in Saudi. And I felt they were really appreciative of the moment.