Accessibility links
The Man Who Gets The Science Right On 'The Big Bang Theory' David Saltzberg makes sure those equations splashed all over CBS's hugely popular sitcom make sense. Saltzberg reviews scripts that arrive with unfinished dialogue and brackets reading, "Insert Science Here." 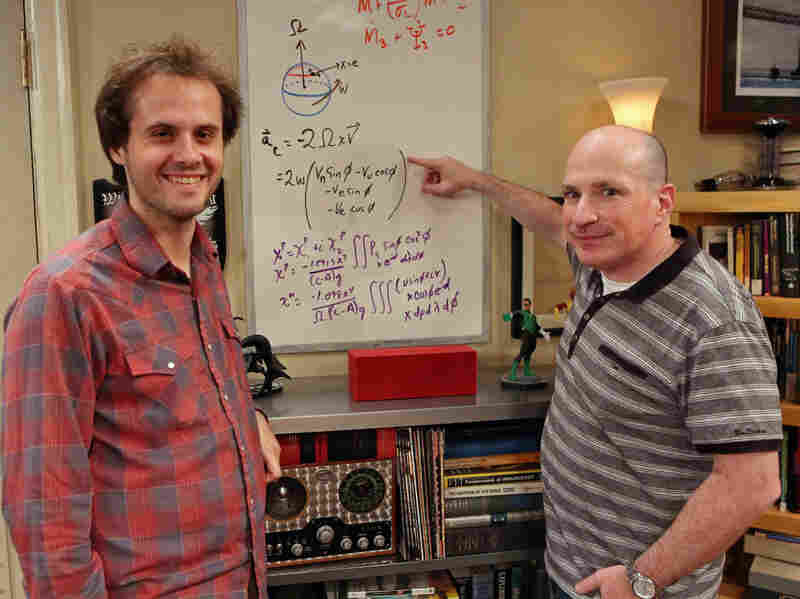 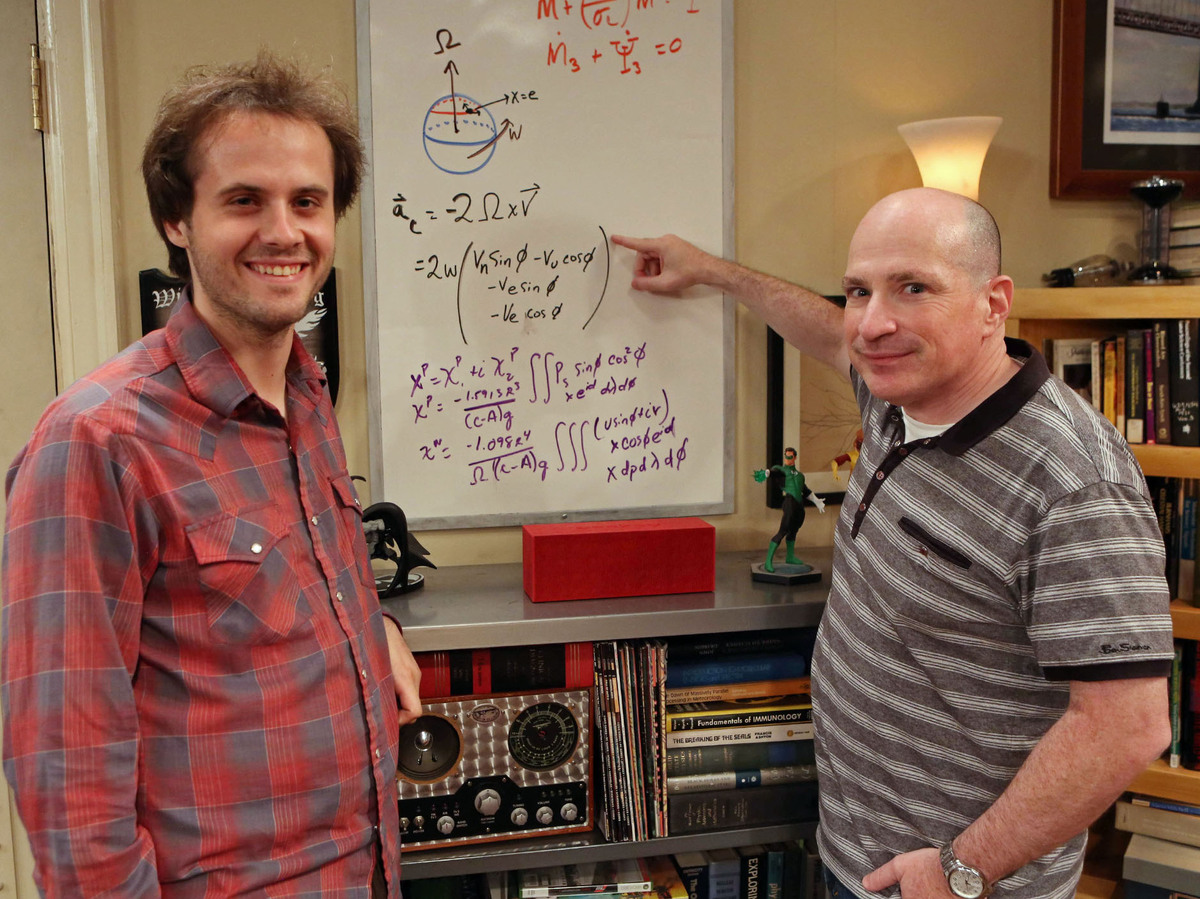 David Saltzberg (right) hosts his "Geek of the Week," UCLA student Andrew Peck, on the set of The Big Bang Theory.

Sure, Bob Newhart may have won his first Emmy for guest-starring as Professor Proton on the hugely popular show The Big Bang Theory, about four young scientists at Caltech. But behind the scenes is a real-life professor, David Saltzberg of UCLA.

"It's just like a physics lab!" Saltzberg exclaims as he maneuvers around the show's sprawling set. "You have to watch where you walk. There are cables and everything everywhere."

Every week, Saltzberg attends the show's live taping at the Warner Bros. lot in Burbank, Calif. He makes sure the whiteboards are correct. For every new episode, they're covered by a fresh scrawl of formulas dreamed up by Saltzberg and admired by physicists for their scrupulous accuracy — and occasional shoutouts to what's happening in the world of science.

"The whiteboards have dozens of fans," Saltzberg jokes.

Saltzberg also reviews scripts in progress. They arrive with unfinished dialogue and brackets reading, "Insert Science Here." He fills in the blanks, as in an episode where Dr. Sheldon Cooper, a puffed-up theoretical physicist, keeps bumming rides from a neighbor.

"She couldn't understand why Sheldon never got a driver's license," Saltzberg explains. When she asks what Sheldon was doing at age 16, when everyone else was learning to drive, he answers, as per Saltzberg, "Examining perturbative amplitudes in N=4 supersymmetric theories, leading to a reexamination of the ultraviolet properties of multiloop N=8 supergravity, using modern twistor theory."

As it happens, that's "a real, important project that one of my friends is working on," Saltzberg says. 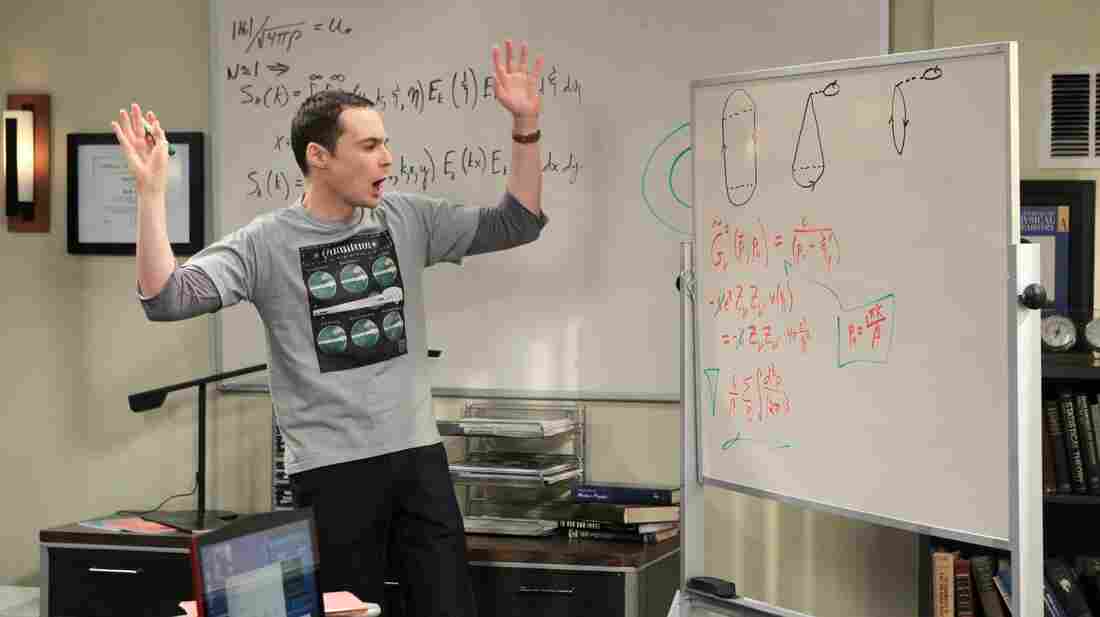 If the science that's so exciting to Sheldon (Jim Parsons) is right, it's because of David Saltzberg. Sonja Flemming/CBS hide caption 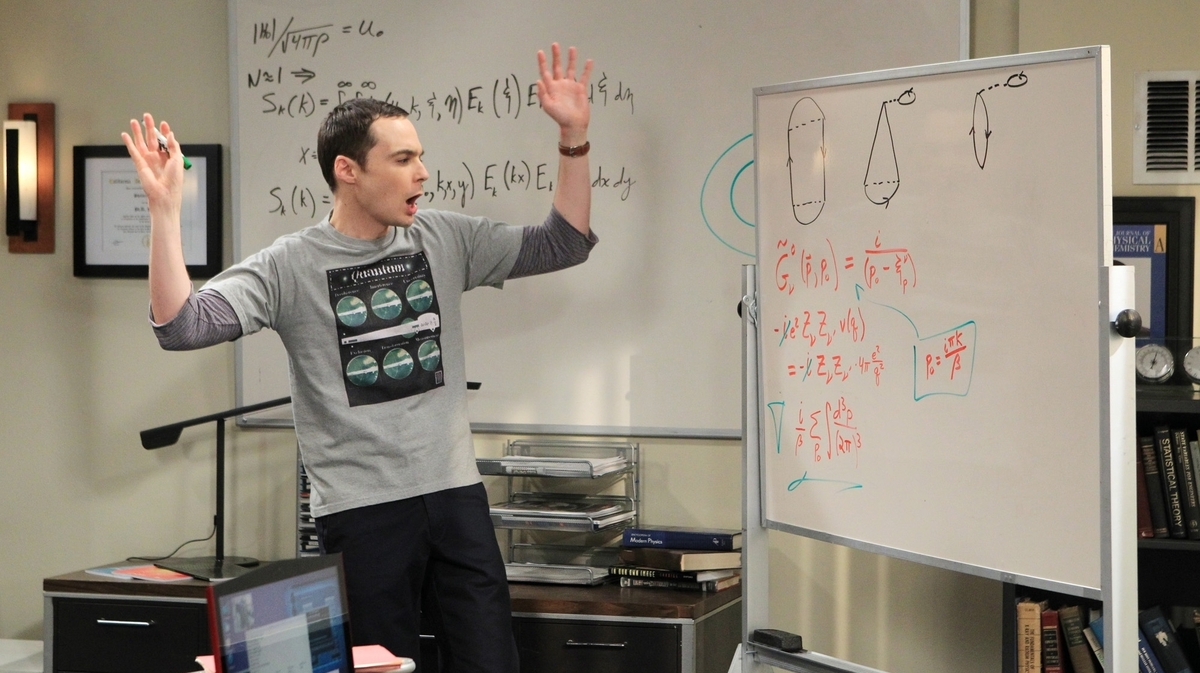 If the science that's so exciting to Sheldon (Jim Parsons) is right, it's because of David Saltzberg.

The scientist got involved with The Big Bang Theory in 2007, when the show was little more than a theoretical construct. The set designers asked him to show them some real graduate students' apartments, so they could see how young scientists really live.

"And they did a nice, faithful re-creation of their apartments," he said, adding that after CBS tested the show, the sets were scrapped, because, Saltzberg thinks, the sets were too depressing.

Saltzberg gets backup from actress Mayim Bialik, who happens to have a PhD in neuroscience. (Her character, Dr. Amy Farrah Fowler, is also a neuroscientist.) She helps Saltzberg fine-tune the show's scientific details.

"Like, what kind of microscope would they be using, or how thin should these slices be," she offers as an example.

For his part, Saltzberg has gotten in front of the camera exactly once. He was an extra in a scene in a university cafeteria, when the nebbishy Howard Wolowitz shares a thrilling milestone: He finally has a girlfriend. Saltzberg describes his acting technique thusly: "I just looked at him like, what's your problem? Why are you bothering me? I'm a physicist. I have other things to think about."

Executive producer Bill Prady says it's useful to have Saltzberg around for last-minute questions — like the time the show needed him to calculate how fast a bottle would fall if it were dropped from a four-story window. He can also check the accuracy of jokes made up on the fly.

"We shoot in front of a live audience," Prady says. "And if a joke dies, the writers gather and we pitch new jokes, and when we get one, we go teach it to the actors and we do the scene again."

It's the only joke Saltzberg has ever gotten on the show.

"The writers were very kind," he says. "But it's a little bit like if I'm at a party and having drinks and someone says, well, they have a new theory of gravity they want to tell me about."

Ultimately, Saltzberg says, creating comedy is not that different from experimental science. At the end of the day, it either works or it doesn't. But he adds that he thinks this sitcom, The Big Bang Theory, is more important than his work in the lab.

"This has a lot more impact than anything I will ever do," he says. "It's hard to fathom, when you think about 20 million viewers on the first showing — and that doesn't include other countries and reruns. I'm happy if a paper I write gets read by a dozen people."

Saltzberg says he became a scientist partly because of popular culture, such as Isaac Asimov's science fiction and the '70s TV show Space: 1999. He believes the rigor and passion for science he brings to The Big Bang Theory might inspire kids in the audience to one day become scientists, too.