Accessibility links
A Sloppy Emmy Telecast Does The Wrong Song And Dance The Emmy Awards on Sunday night honored some deserving winners, both surprising and not. But more than that, it was a ceremony that was slack, uninspired and sometimes insulting to the talent it was supposedly saluting. 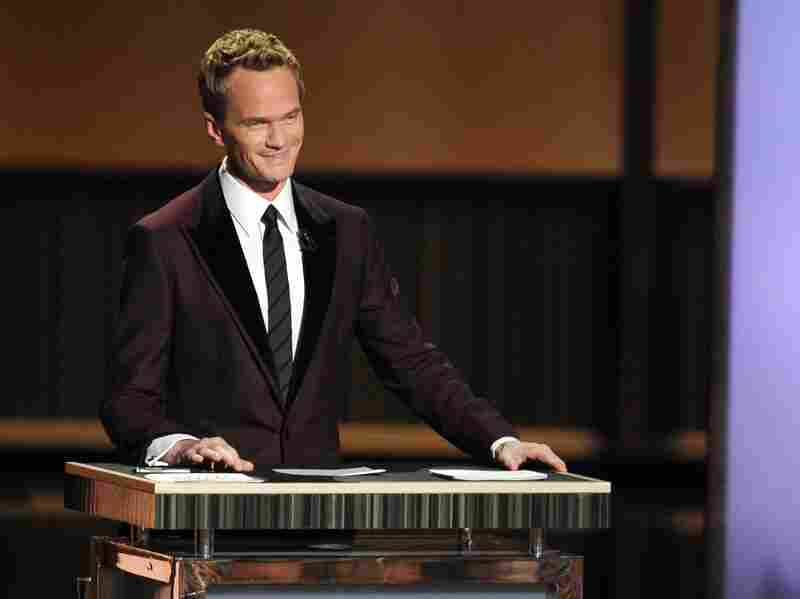 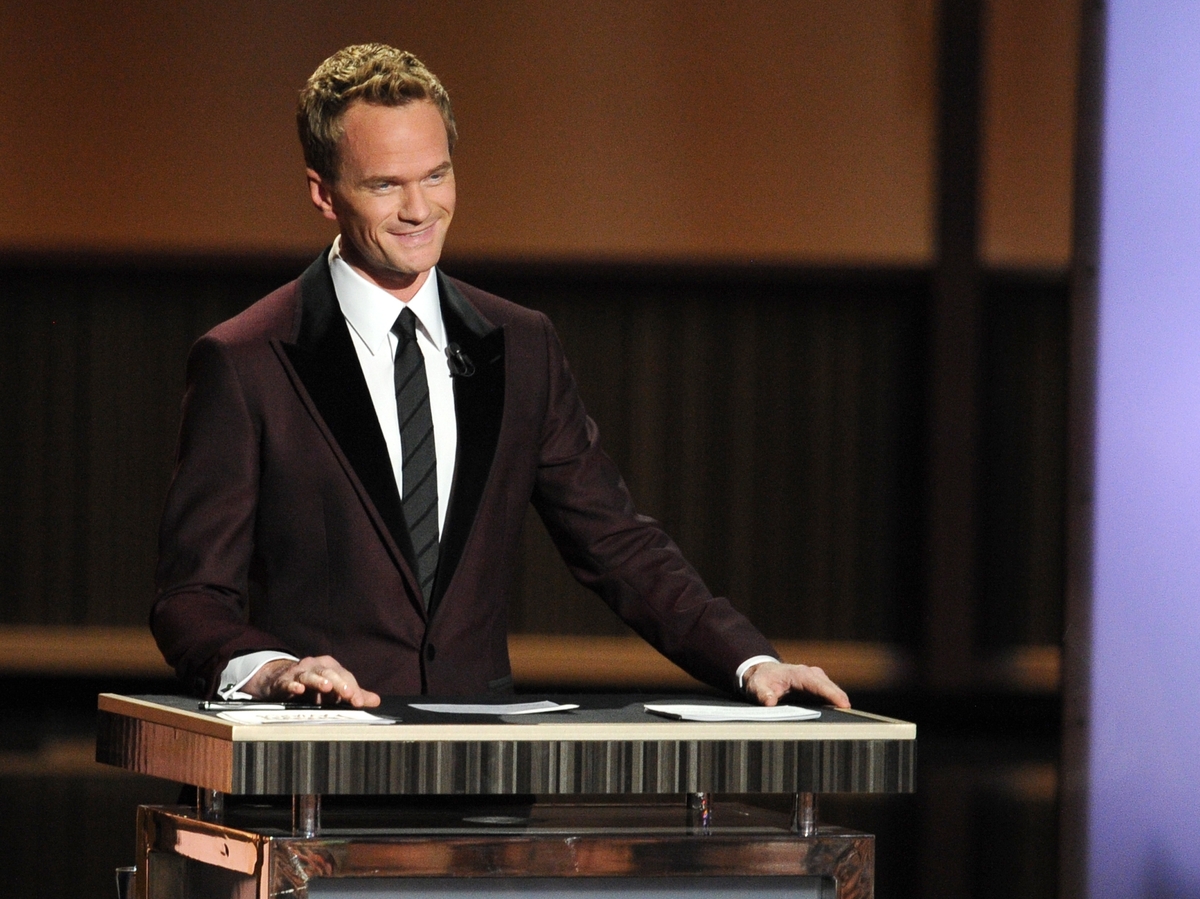 Awards shows aren't easy. That's partly because they're fundamentally unsympathetic affairs in which rich pretty people give each other trophies, and partly because there are only a few real things on which they can be judged: the opening by the host, the montages and features, the speeches, the assorted intangibles and — oh, right — who wins.

By almost any of these measures, Sunday night's Emmy Awards were not only merely bad but really most sincerely bad, or at best (particularly in the case of winners) a bag that's very much mixed.

Neil Patrick Harris is a much-admired — and Emmy-winning! — host. As the host of the Tonys earlier this year, he executed perhaps the best awards-show opening ... ever. But all the life, originality, enthusiasm, inventiveness and surprisingly deep humanity that was in that salute to theater and to creative people generally was missing from the Emmy opening Sunday night, which was an only so-so montage of out-of-context clips from various shows followed by a dead-on-arrival, poorly written exchange with past Emmy hosts including Jane Lynch, the Jimmys Kimmel and Fallon and Conan O'Brien.

Perhaps it's unfair to judge a three-hour show by the first six or eight minutes, but it's almost impossible not to, and this one seemed to be driving on half-inflated tires right from the start.

The tone didn't improve as a result of the decision to pepper the show with remembrances of people who died this year (that's over and above the "In Memoriam" montage). Because there were no clips of their work shown, these were really just very short speeches in which the people you'd expect to hear from (Edie Falco on James Gandolfini; Rob Reiner on Jean Stapleton) said largely the generous and kind things you'd expect them to say, many of which they publicly said at the time those deaths happened.

There was controversy over the decision to include Glee's Cory Monteith in the group of five honorees and not, for instance, Jack Klugman or Larry Hagman. But honestly, once you start trying to pluck five people from all of those who died, you're always more omitting people than including them — what if there'd been no Monteith, and there had been Klugman but no Hagman? Or Hagman and no Klugman? And then what about Roger Ebert?

There are always many people who deserve recognition; that's what the In Memoriam montage is about in the first place. Deciding which deaths we're extra sad about is not the classiest debate in which to be engaged, which is why the rising and falling applause during In Memoriam is such a brutally tacky moment whenever it happens.

There were eventually a couple of production numbers, one of which would have probably been OK at the top of the show, and the other of which was a salute to the nominated choreographers. It might have seemed like a good idea on paper, but it wound up feeling like the corniest of corny old-school awards show stuff, in which there were actually people dressed as Walter White and Jesse Pinkman dancing to a souped-up dance mix of the wonderfully spare Breaking Bad theme music. If you've always wanted interpretive dance about Game Of Thrones, then this was your number, but if not? It was not, so much.

Maybe nothing seemed as out-of-place, though, as the performance by Elton John that was connected to the Emmys by nothing except Michael Douglas' tepid linking of John to Liberace, whom Douglas played in the HBO film Behind The Candelabra. A close second was the intermittently off-pitch performance by Carrie Underwood of "Yesterday," which was apparently a salute to ... television's coverage of the Kennedy assassination?

Plenty of the speeches were lovely and funny — Merritt Wever's acceptance of the Outstanding Supporting Actress In A Comedy Series award for her work in Nurse Jackie was just this: "Thanks so much. Thank you so much. I gotta go, bye." Douglas chose to turn his acceptance for Behind The Candelabra into a great opportunity for "straight guy teases other straight guy about gay stuff HA HA HA" comedy, which seemed an odd choice in light of the way the film deliberately humanized Liberace and his lover.

But at least Douglas — perhaps because he's a movie star? — also got 90 seconds before the orchestra tried to play him off. Claire Danes, who started by saluting Homeland writer Henry Bromell, who passed away this year and had an Emmy collected Sunday night by his widow, began being played off after 45 seconds.

In fact, at the same time they were cramming in things like a promo for How I Met Your Mother and a lot of happy talk about CBS's fall shows, they were playing off winners so quickly that few of them really had the chance to get into the kind of groove that leads to the nicest speeches. Many of the winners seemed to give half of their speeches over the orchestra trying to play them off, so that the entire show felt like there was plenty of time for the stuff nobody cared about, but the winners were inconvenient interlopers.

As for those winners themselves, some were very unexpected, like Wever, and like Tony Hale for his performance on Veep, and Bobby Cannavale for Boardwalk Empire, and certainly Jeff Daniels for playing a smug, insufferable ball of smarm on The Newsroom. (Interesting that the major upsets tilted toward HBO, which seems to have figured out something about campaigning this year.)

Some were new but overdue, like Breaking Bad's wins for Outstanding Drama Series and Anna Gunn's performance as Skyler White.

But many were dull, including Modern Family walking off with another Outstanding Comedy Series victory over shows that did more consistently funny and interesting work last season, including the final run of 30 Rock.

The strangest thing about the entire ceremony, however, was the near-complete absence of clips from shows. If you walked in having never seen any of these fine performers and creators at work, you walked out much the same way. There was time for Elton John and Carrie Underwood, for interpretive dance and sad speeches about dead people, but there was no time — in a three-hour show — to see or hear most of what people were there to be honored for.

Again: these productions aren't easy; more of them get lousy reviews than great ones. But most at least have a flash of life here and there. The Emmys on Sunday were an example of almost everything going wrong at once, centered around a simple failure to seem at all like a celebration of great television.