Accessibility links
'12 Years' Star Alfre Woodard: 'You're Never Too Young For The Truth' Actress Alfre Woodard missed out on an Emmy last night for her role in the television remake of Steel Magnolias, but she's got plenty of other golden statues to comfort her. She takes us behind the scenes of her upcoming film 12 Years a Slave, and offers some wisdom about the acting business. 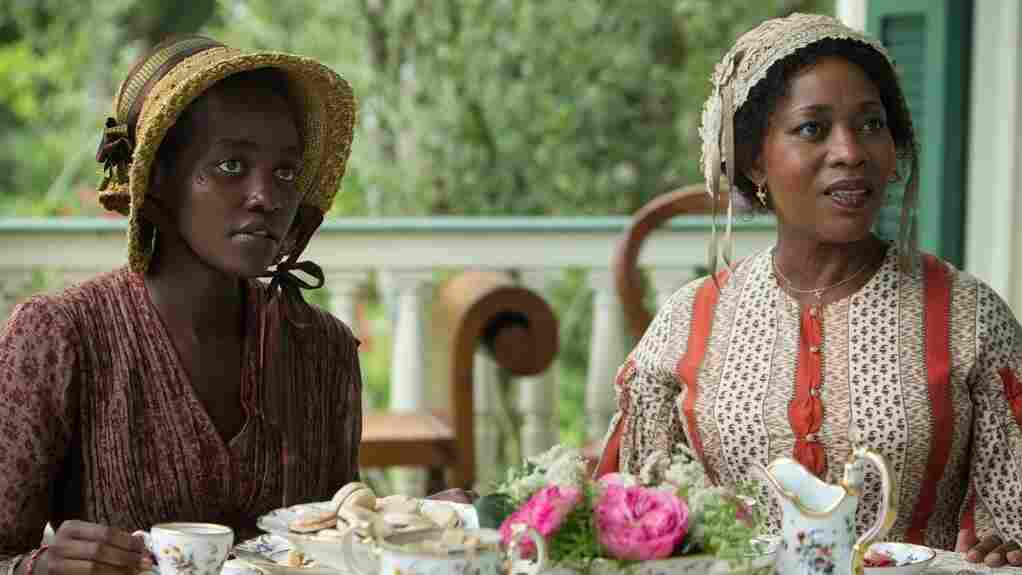 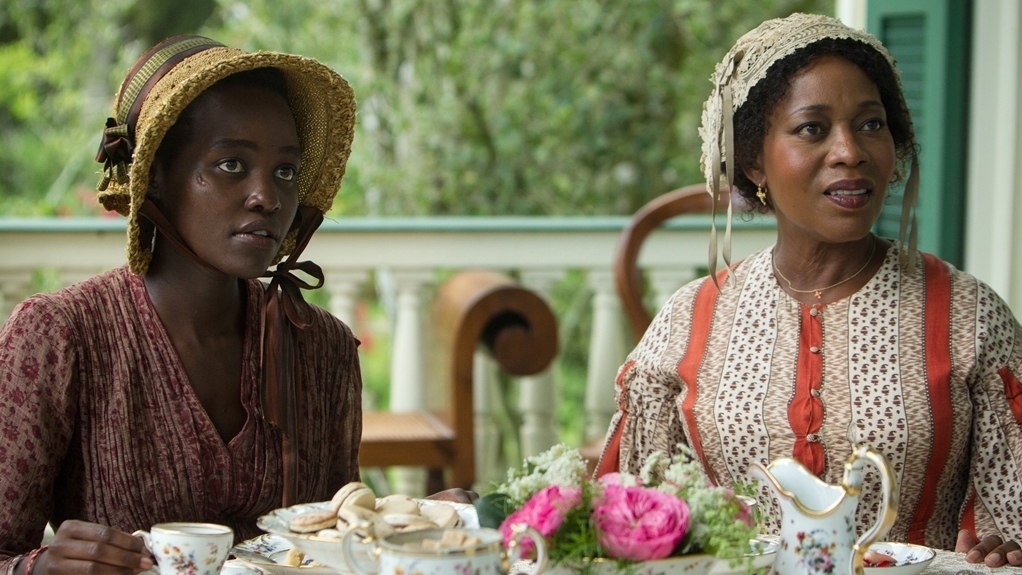 Alfre Woodard as Mistress Harriet Shaw and Lupita Nyong'o as Patsey in 12 Years a Slave.

Alfre Woodard has been a familiar face on television over the course of her three-decade career. She was up for an Emmy Award on Sunday for her role in the Lifetime remake of Steel Magnolias. She didn't win that one, but she still has on her mantle previous Emmys for programs like The Practice and L.A. Law. Woodard is also a powerful presence on the big screen, as evidenced by her Oscar nomination for the 1983 film Cross Creek and roles in acclaimed features like Primal Fear and Love & Basketball.

Now she returns with a disarming and provocative role in 12 Years a Slave, which opens in theaters next month. It's the highly anticipated film by director Steve McQueen, based on a true story about a free black man who was kidnapped into slavery in the 1800s.

Woodard spoke with Tell Me More host Michel Martin about the beauty and brutality of 12 Years a Slave, and how she's not always the serious actress people may see her as.

On the hard truth in 12 Years a Slave

Steve McQueen, he is a very truthful storyteller — not judgmental, not commenting, presenting a truthful situation. And when you do that without blinking, without hedging your bets, that is the thing that people are arrested by. The toughness is that you have no place to go from it. He does shots where he won't pull away. ... I just want people to know that it is the truthfulness that we don't normally get in cinema that makes it uncomfortable. And the violence is never gratuitous. It is the fact of the violence that is a part of our history.

We were a slave economy longer than we've been anything else. But yet, black people don't want to hear about it. They feel shame or anger. White people don't want to hear about it. They say, "We didn't have any money. We didn't own anything. I don't even know these, you know, who the plantation people were." And all the new arrivals in the past 50 years are like, "I don't even know what you all are talking about." So as Americans. we want to be balanced and successful as a nation, as individuals. But we want to deny that we ever had a childhood. What I love about this is this great gift that Steve has given us: It fills that anxious void of us not having any roots, any balance. And so, once we accept it, black people, white people, brown people, everybody will be able to say, "Oh, OK. That's what it is." It's like having a great family secret that was awful and beautiful at the same time told to you when you get to be 11 years old, you suddenly feel, "OK, I'm real. I get it."

And we also watch Solomon [Northup, the film's main character], who we have identified with, go through hell. And he's able to persevere because of his love for his family. That's what he's getting back to. I think it is a triumphant film. And I think when Americans watch this film, we'll have a common language to even have a dialogue, so when things happen like Trayvon [Martin] being murdered, we can actually hear the other person better, and get it that a hoodie means something so comfortable to certain ages and certain parts of our culture, and it means something so dire to another.

My children are 19 and 22, and when they see it, I want to sit next to them. But I think children are ready to see this at 11. ... Just think back when you were 12. You knew a lot more than you let on to your parents, to people around you. And our kids are exposed to so much more. ... And you're never too young for the truth.

I live on an adjacent plantation, and I do have my freedom. She is a woman who, like all women during this period, whether they were field slaves, house slaves, white mistresses of households, whoever they were, women had a very tough road to hoe. And you get to see how little actual power they had in the society. But they all figured out a way to use the personal power they had as women to make their lives livable.

On how she chooses roles

The essential thing you have to have as an actor in film, in television, and stage as well, is the ability to process rejection. Because no matter how big you are, you're rejected every day. And you only know us from what we chose from what was offered to us. And so the only power you have as a person who has to wait to be chosen, is to say yes and no. When I pick up a script, if I can get through it engaged and having had an emotional experience just reading as my character, I feel touched by that, and they didn't do something that would insult another human being or their dignity, then I'm in. I don't even discuss the money. Of course that makes my agents and my managers nuts. It was like, "I don't care if they have $50,000 for the whole movie. I'm in if the script's there."

Being a fan of "stupid and wrong" movies, and finding humor in everything

"Wrong" can be really smart as well. So my son has had me sit and watch Jackass with him because he wanted to have what he called quality time, so we'd understand each other [laughs]. And he'll tell me really blue, crazy jokes that he makes up, and I'll guffaw. And then I'll say, "Duncan, you know, I'm your mom. You shouldn't tell that to your friends. You shouldn't tell that to me." And he goes, "Yeah, but I know you'd laugh, Mom." So I do have a rather low sense of humor. But people get out of a piece of material a lot, depending on what they bring to it. So those people who think of me as an incredibly serious actor, those particular things speak to them. ... Actually some of my favorite roles have been, you know, a little wacky. My favorite character to date is Popeye Jackson from Miss Firecracker.

Even when you play a serious person, dramatic person, you have to find the humor even in the tragedy. It is the humor that makes a person real and believable. Because everybody is trying to smile. Everybody wants to feel good. And so, hopefully, I bring a sense of humor to my villainous characters, to the sad ones ... to the questionable ones. But anybody that knows me personally knows that I'm actually bawdy and a little bit profane.