Accessibility links
When It Comes To Businesses, How Big Is Small? Small businesses are celebrated and exalted as the hard-working, most deserving members of the political economy. They get tax breaks, and they're touted as the engines of job creation. But it turns out that when trying to figure out what a small business is, there is no one definition. 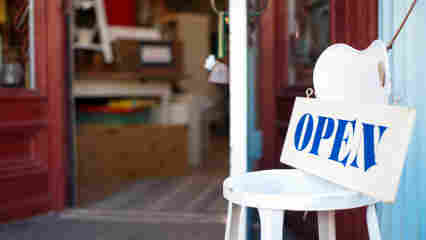 First in a series about small businesses in America.

Small businesses are celebrated and exalted as the hard-working, most deserving members of the political economy. They get tax breaks, and they're touted as the engines of job creation.

But a basic question: What is a small business? It turns out there is no one definition.

Are small businesses made up of just mom and pop shops? What's the upper limit? When various agencies and groups that represent small businesses are asked, they aren't in agreement about what "small" means.

What Is A Small Business?

According to the Small Business Administration, a small business is one that's independently owned and operated, is organized for profit and is not dominant in its field. So what does small mean? The SBA says it can be as large as 500 employees. Or as large as 1,500. Wait, what?

It turns out how big a small business can be changed to reflect industry differences. And it can depend on the company's average number of employees (over the preceding 12 months) or on sales volume (averaged over three years). For example:

First stop: the Small Business Administration, which generally defines a "small" business as one that has fewer than 500 employees — and well over 99 percent fit under that marker. But in fact, depending on the industry, there are other qualifications based on revenue or number of assets.

It is so complex that there's a division within the SBA that's devoted to defining what a small business is. Khem Sharma, an assistant director of that division, says the SBA's definitions of "small" are important because they help determine which businesses are eligible to get special low-interest-rate loans or loan guarantees. It can also determine who can bid on government contracts that are set aside for small business. The SBA's work also helps inform other parts of the government that have programs aimed at small firms.

Sharma says that, believe it or not, things are a lot simpler than they once were. That is, the SBA once had 32 different classifications of small, based on revenue. Now, the agency is trying to whittle the number of definitions down to a more manageable — but still complicated — eight.

But, Sharma warns, don't get too attached to the SBA's distinctions, either, because it revises its definitions about once every five years.

The National Federation of Independent Business defines small as simply "not publicly traded." That can be confusing, says Chris Whitcomb, the group's tax counsel.

"It's really hard to define what a small business is, and there are multiple definitions for a reason," Whitcomb says.

Eighty percent of its members have fewer than 20 workers, but then again, the group's members include everything from sole proprietorships to Herr Foods, a potato chip maker with 1,500 employees. Here's another confusing wrinkle: Franchise owners can also be small businesses, even if they are part of a big, multinational brand.

The complexity manifests the most, Whitcomb says, when it comes to a small business's taxes. Depending on the size and type of business, tax incentives and structures differ, and more than 90 percent of small businesses need accountants to figure out how to file with the Internal Revenue Service.

"Once you have one employee, you're starting to think about that, and you have to think about putting things in place to take care of the payroll, to do the withholding, to file the right forms," he says.

Take, for example, the new health care law. It includes a mandate for employers with 50 or more full-time workers to either provide health insurance or pay a penalty. But 50 is far from a standard measure across the federal government.

And the IRS, like everyone else, does not have a single definition