Accessibility links
TV Trips Into Fall, But These Days Who Knows Where To Look? TV critic David Bianculli points to Brooklyn Nine-Nine, starring Andy Samberg, and The Blacklist, starring James Spader, as shows to watch this season. Other debuts, like The Michael J. Fox Show and The Crazy Ones, show plenty of potential. 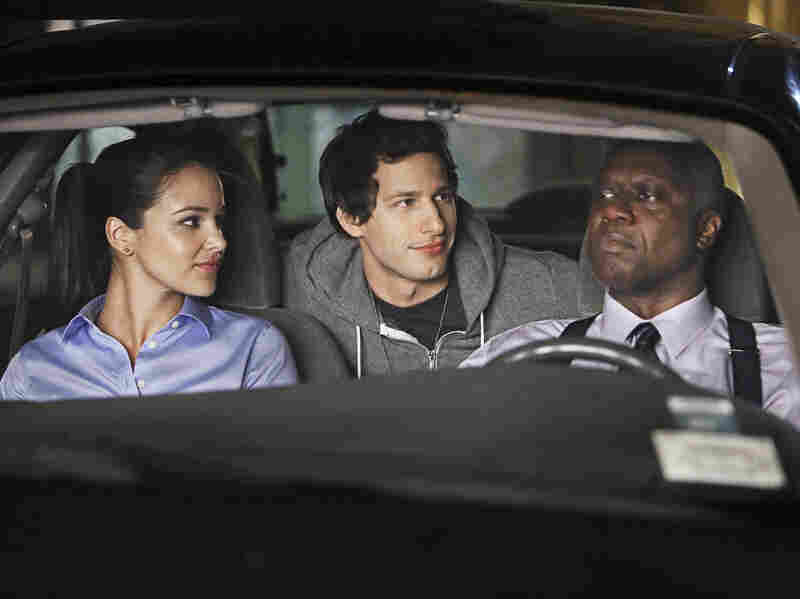 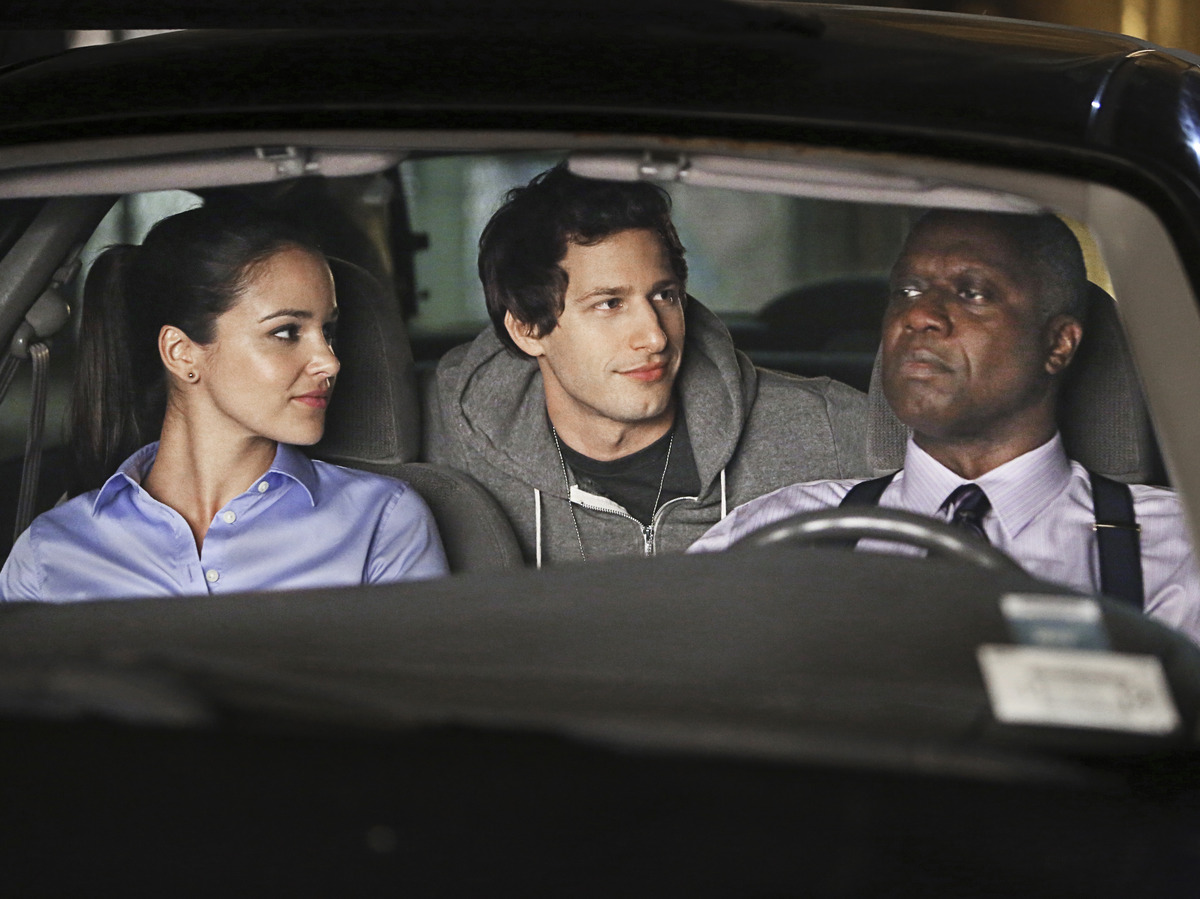 We're kicking off a new fall TV season this week. A generation ago, even less, that was cause for major media focus, as new shows from the broadcast networks jockeyed for attention and position while old favorites returned with new episodes. Also back then, the Emmys were a celebration of the best, and clips from the nominated shows reminded you just why they were considered the best of the best.

I'll end the suspense right off by declaring that, once again this season, the broadcast networks haven't come up with one single show that absolutely, positively has to be added to your watch list. Oh, there are a handful of good ones, or promising ones, but not one that arrives so perfectly made out of the box that it sticks the landing the way Lost once did. These days, it feels like the broadcast networks are the ones who are lost, trying to straddle the territory between edgy, new-school cable shows and comfy, old-school broadcast ones.

Some of the best new shows of the season — on broadcast television, at least — you may have sampled already. Brooklyn Nine-Nine, a comedy cop show on Fox teaming Saturday Night Live veteran Andy Samberg with Homicide: Life on the Street vet Andre Braugher, started Sept. 17 and is enjoyable precisely because of that odd-couple pairing.

The Blacklist, a very Silence of the Lambs-ish NBC drama, stars James Spader as a mysterious career criminal advising a rookie FBI profiler. That show started Monday, and is much better than that description makes it sound.

NBC also has The Michael J. Fox Show, which returns the beloved star to the weekly sitcom form. The first few episodes aren't as rich or funny as I'd like, but there's no denying it's a treat to watch this actor again, and it's the sort of show I expect will find its legs quickly.

Over on CBS, there's another show bringing back a hot sitcom star from the '80s: Robin Williams, who plays a fast-talking ad executive in a sitcom called The Crazy Ones. Like Fox's show, it's not as amusing as it should be, but shows plenty of potential.

Fall TV: A Whole Lot Of Trouble On The Home Front

On ABC, the most intriguing freshman shows are both spinoffs. There's Marvel's Agents of S.H.I.E.L.D., a Marvel Comics spinoff starting Tuesday that has Joss Whedon at the helm (and he's earned our TV trust). And there's Once Upon a Time in Wonderland, a visually opulent spinoff of Once Upon a Time that arrives next week with an interesting scheduling arrangement: It's pre-canceled, designed to last only one season as a stand-alone spinoff, then call it a day.

That may sound unprecedented, but it's actually a concept that has one of the most famous TV precedents of all: That's exactly the way CBS once launched an intentionally temporary spinoff of The Jackie Gleason Show in 1955, and gave us a little one-season experiment called The Honeymooners.

As a general overview, that's pretty much the best of the bunch, at least as first impressions go. But my lasting impression is that, as with last year at this time, I care a lot less about most new shows on broadcast TV than about the new, returning or concluding shows appearing on cable or elsewhere.

Broadcast TV still has some great returning shows — The Good Wife, Parenthood — but it's not generating new ones. Meanwhile, on Sunday, Showtime has the return of Homeland and the premiere of Masters of Sex, a playful series about the infamous studies by William Masters and Virginia Johnson. That same night, HBO has the return of Eastbound & Down and the premiere of Hello Ladies, a goofy comedy starring Stephen Merchant from the Ricky Gervais comedy Extras.

And also on Sunday, AMC has what is, to me, easily the TV event of the entire season: It has the series finale of Breaking Bad, which is proving single-handedly the impact and excitement that a TV show, presented weekly and crafted perfectly, can still generate, even in these days of an audience watching shows on devices as much as TV sets, and on cable and streaming outlets as well as on networks.

Which, by the way, is my major lingering thought about last Sunday's Emmy telecast. The nominations, and in some cases the winners, testified to the popularity and quality of TV shows from all manner of sources. Breaking Bad won its first Emmy for Outstanding Drama Series, ABC's Modern Family held on to win another Emmy for Outstanding Comedy Series for the broadcast side, and even Netflix's House of Cards won a significant Emmy, for Outstanding Direction.

What the Emmys failed to do this year, though, was show clips from those nominated and winning shows. That was a major mistake: With the TV audience as fragmented as it is, it was a chance to show off and promote all the best under one tent.

Emmy viewers did get to see Kevin Spacey as the oily, Machiavellian schemer of House of Cards, but only because he played the character in the Emmy telecast's opening sketch. Emmy host Neil Patrick Harris and the four previous hosts of the show pretended to argue on stage, at which point the image shifted to a TV camera at audience level, where Spacey, just like his character on House of Cards, turned to whisper conspiratorially to the camera. The black-tie Emmy audience got and loved the reference and the joke instantly — so much so that they roared just at the camera angle. Spacey was forced to wait for things to calm down before delivering his lines, fully in character.

And yet, later on, when Spacey was competing in the Best Actor in a Drama Series category, we saw no clips of his actual performance from House of Cards. TV viewers who haven't seen that show — and there are scores of millions of them — may have had no idea what was going on.

But what was going on was a perfect microcosm of television in the year 2013.The broadcast networks have no idea, right now, how to hold and entertain their audience. And they're fighting from within, while all around, there are others ready and eager to pounce, and already taking advantage of the opening.