Accessibility links
Book Review: 'An Appetite For Wonder,' By Richard Dawkins In his new memoir, An Appetite for Wonder: The Making of a Scientist, the Oxford scientist reveals for the first time intimate details about his life — some of which are quite startling. Reviewer J.P. O'Malley says the book is "a fascinating account" of one man's quest for answers. 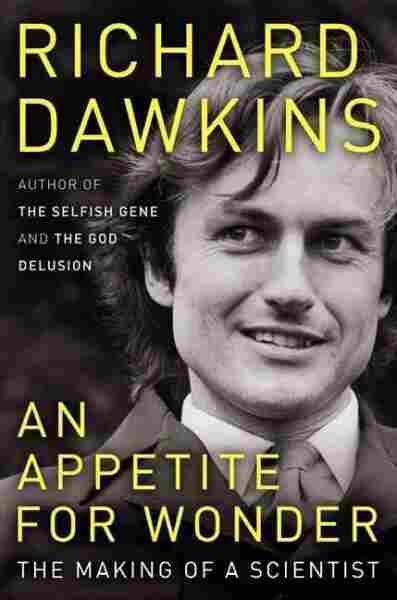 He may be the most controversial atheist on the planet today, but there was once a time when Richard Dawkins was a respectable, churchgoing Christian.

In his new memoir, An Appetite for Wonder, the Oxford scientist recalls his erstwhile pious life: "I prayed every night ...[and kneeled] at the altar, where, I believed, an angel might appear to me in a vision." When the apparition finally came it was from a man with a long beard who claimed to understand how human beings evolved. Not that guy with the beard. He was an Englishman named Charles Darwin.

In his 1976 best-selling debut book, The Selfish Gene, Dawkins expressed beautifully the importance of evolution theory in empowering the human spirit. This seemed to bypass many critics of the book, who presumably didn't read it, or just failed to understand its main thesis. In his 12th book to date, the world's leading evolutionary biologist reveals for the first time candid details about his personal life. The narrative covers the period from his childhood years in Africa, right up until the publication of his first book.

Dawkins was born in 1941 in Nairobi, where his father worked in the Colonial Service. The family enjoyed a privileged and pampered lifestyle, with a personal cook, gardener and several servants to assist with domestic duties. It appeared as if Richard, his sister Sarah, and their parents would settle in Africa for good. But in 1949 John Dawkins received a telegram with good news: He had just inherited a number of properties in Oxfordshire, England, from a distant cousin.

Dawkins faces a slight problem for the first half of this book: There is little drama, humor or any other redeeming factor in the story he is attempting to tell. Life in the Home Counties for upper-class citizens in post-war Britain is comfortable, but considerably dull. The most intense passages come when Dawkins confesses his love for P.G. Wodehouse novels, which were read in secret, for fear of being beaten up by the local bullies at boarding school.

It's in these passages that Dawkins reveals disturbing details of inappropriate sexual conduct — or "mild pedophilia" as he has referred to it in an interview — from both teachers and students in the public school system of his teenage years. He confesses that one teacher attempted to groom him by putting his hand down his shorts, but there was no abuse after that one incident. And, he says, he often had to fight off other fellow male boarders who attempted to seduce him.

Will Richard Dawkins Drive A Stake Through The Heart Of The 'Reason Rally'?

But when the young aspiring scientist enters the department of zoology at Oxford University as an undergraduate in 1959, the pace of the book moves up a notch. Dawkins recalls with great enthusiasm some of his initial experiments at Oxford, looking into things like the evolutionary antecedents of human language, behavioral patterns of chicks when deprived of natural sunlight, and the decision-making processes of flies. No revolutionary results emerged from these various studies. But Dawkins sees all of them as exercises in discovering new methods of thinking about animal behavior, and his attention to detail is a joy to read.

In 1964, a young English evolutionary biologist named W.D. Hamilton published two papers in The Journal of Theoretical Biology, giving Dawkins the germ of an idea for his first book. Hamilton's thesis — now often referred to as kin selection — follows the neo-Darwinian synthesis, which centers on the gene as the unit of natural selection. Genes, said Hamilton, are why all plants and animals are good at caring for their offspring and other relations. Put simply: Genes are what encourage social altruism and cooperation between species that are related.

Dawkins writes with an admirable honesty about how the ideas contained in The Selfish Gene were nothing new. But none of the scientists who inspired him had managed to bring together all the stories of the origin of life in one cohesive and metaphorical science-fiction narrative. With lucid yet sparkling prose, the book lifted Dawkins from obscurity to fame as a best-selling author, television star and a prophet for Darwin's idea of evolution by natural selection.

This memoir is primarily concerned with Dawkins' childhood and early scientific life. He eschews long lectures on the evils of theology. But expect the second part of his memoir — due out in another two years — to be a full on war against religion. It's a pity, because his hubristic and arrogant views on this subject — and I say this as a militant atheist myself — seem like a terrible waste of effort.

When focusing on his area of expertise — explaining the magic contained within the natural universe and the tree of life — Dawkins proves that today he is still an extraordinary thinker, and one who has made an enormous contribution to understanding human nature. This memoir is a fascinating account of one man's attempt to find answers to some of the most difficult questions posed to mankind.

J.P. O'Malley is a freelance journalist based in London. His work has appeared in The Spectator, The Economist, The Daily Beast, The Observer, The Sunday Times and many other publications.

Read an excerpt of An Appetite For Wonder