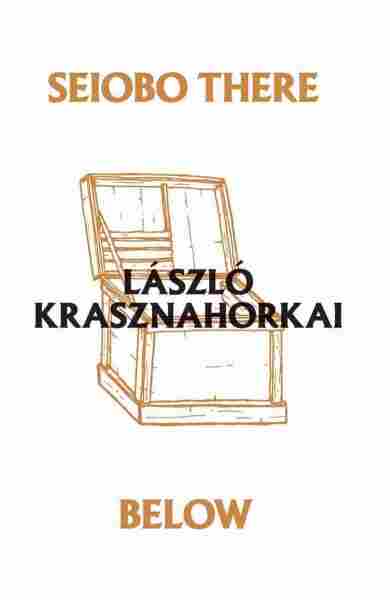 Hungary has been in the news these past few years for all the wrong reasons. Its government, led by the right-wing nationalist Viktor Orban, has been curtailing civil liberties and cracking down on cultural freedoms, much to the chagrin of other European leaders. It's ironic, then, that at this troubling moment for Hungary, a generation of talented writers has been winning more attention abroad. The Nobel Prize winner Imre Kertesz, author of the new memoir Dossier K, and the polymath Peter Nadas, whose giant novel Parallel Stories was a publishing event, are probably the most famous Hungarian writers working today. But increasingly, young American literary types are falling for an unlikely Hungarian icon: Laszlo Krasznahorkai, a novelist and screenwriter whom the late Susan Sontag once called "the contemporary master of the apocalypse."

"Why is New York's literary crowd suddenly in thrall to Hungarian fiction?" The Guardian asked last year when the writer came to the United States. That may have been an overstatement, but it's true that Krasznahorkai writes unlike anyone else in fiction today, and something about his powerful, unsettling fiction drives fans to excess. His latest book to appear in English is Seiobo There Below, first published in Hungary in 2008. This newest novel — or maybe it's a book of interrelated short stories; the chapters connect only in tangential ways — is an excellent introduction to Krasznahorkai's difficult but deeply rewarding fiction. Brighter and more open than some of his earlier works, Seiobo is a book about art, about artists and spectators, the difficulty of artistic creation, and the glorious, sometimes overwhelming force works of art can have upon us.

In each chapter (or story), set in locations as far afield as Venice and Kyoto and in periods from prehistory to today, we encounter artists struggling to create beauty amid the pressures of daily life, and ordinary people striving to concentrate on works of art against the roar of the world outside. In one section, a homeless Hungarian man wandering in contemporary Barcelona wanders into an apartment building designed by Gaudi and finds himself overcome by an exhibition of Russian icons, "terrifyingly shining and golden." In another, an old craftsman painstakingly carves masks for a Noh theater company; the labor is peaceful, but the result is demonic. Many of the artists and cultural figures Krasznahorkai follows are real, such as the Italian painter Perugino; others are fictional, and still others hover on the border between the two. The link among them — if there is one — is the goddess Seiobo, a figure of Japanese mythology who makes occasional appearances throughout the book. In a rare moment of first-person narration, Seiobo descends from the heavens to inspire a theatrical performer, and themes of the sacred and profane reoccur in other chapters; perhaps she is there too. 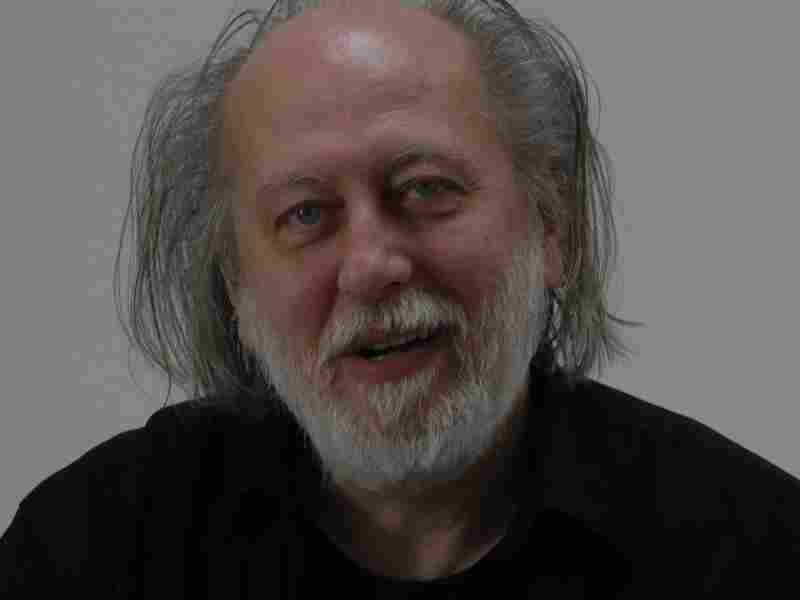 Laszlo Krasznahorkai is a Hungarian novelist and screenwriter best known for his novels Satantango and The Melancholy of Resistance. Courtesy of New Directions hide caption 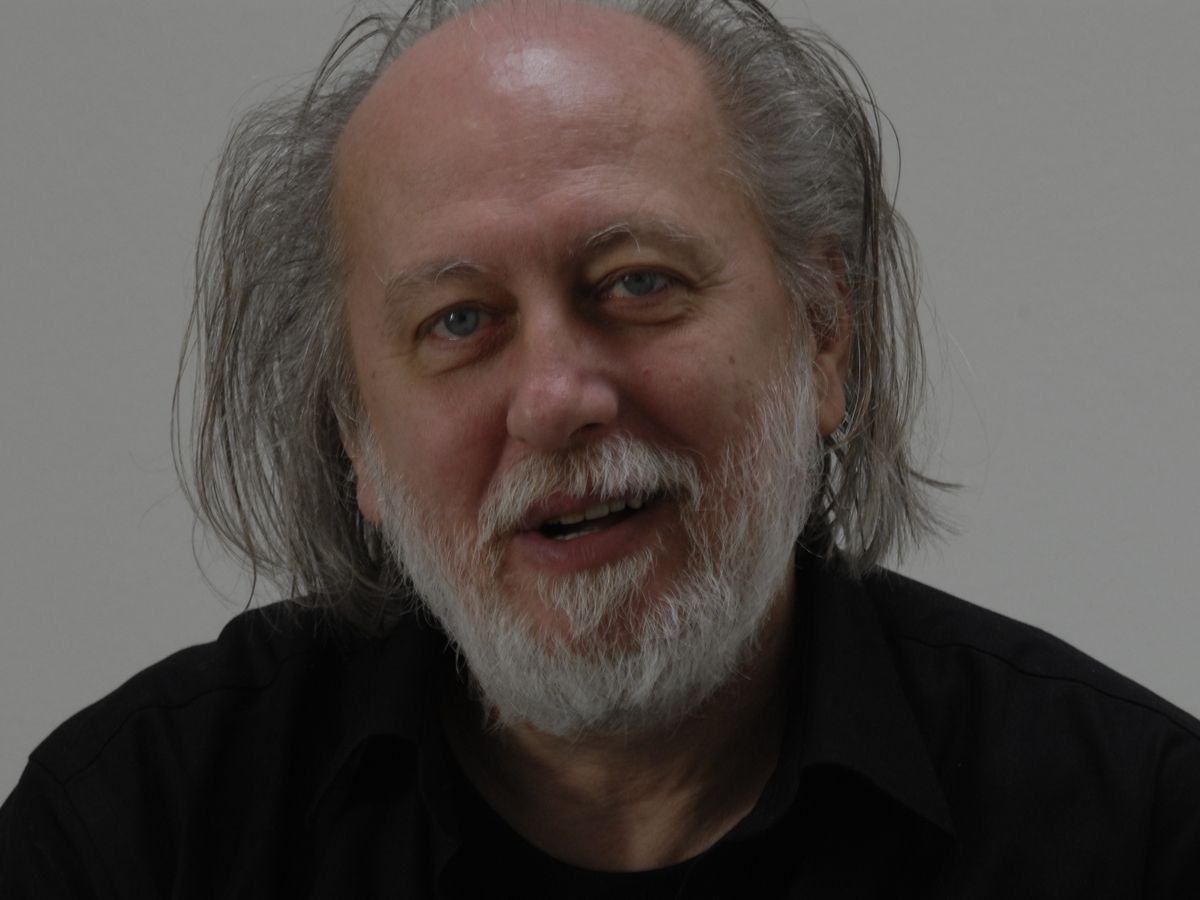 Laszlo Krasznahorkai is a Hungarian novelist and screenwriter best known for his novels Satantango and The Melancholy of Resistance.

The breadth of material these stories cover is breathtaking, but Krasznahorkai wears his erudition lightly. Seiobo There Below proceeds slowly and deliberately, building up from page to page until each chapter obtains an almost unbearable intensity. His characters are usually isolated, in studios or ateliers, and where other authors rely on dialogue, Krasznahorkai relies abundantly on third-person narration. He constructs portraits out of minutely observed details and places them into surprising, sometimes cosmic settings.

I'd quote a sentence here to show you how he does it — but if I did that would take up the entire space allotted to this review and much more besides. This most single-minded of authors never uses a period when a comma will do, and his sinuous, at times vertiginous sentences can extend to eight pages or more. (Ottilie Mulzet, the very capable translator, must have had her hands full.) Here, for example, is the start of an extraordinary passage on Filippino Lippi, a painter of the Italian renaissance: "He already knew how to draw a Madonna even before he knew what a Madonna was, but it wasn't only in this that he displayed an extraordinary talent, but in nearly everything else too, for he was able to read and write, master the skills of carpentry, use the tools of the workshop, grind and mix the pigments to perfection ..." And on it goes, for six more pages, spinning out the whole of Filippino's youth and training in an unstoppable performance of literary acrobatics. One chapter, in which a scholar of Baroque music gives a lecture to a shabby group of villagers, is a single sentence stretching across nearly two dozen pages.

Near-infinite sentences in a nonlinear narrative shuttling across time and space, linked only by occasional appearances from a Japanese goddess? It sounds daunting, I realize. Yet the amazing thing about Seiobo There Below is that Krasznahorkai makes the whole thing feel utterly natural and utterly relevant. Krasznahorkai is one of contemporary literature's most daring and difficult figures, but although this book is ambitious, it isn't ever obscure. On the contrary: it places upon us readers the same demands of all great art, and allows us to grasp a vision of painstaking beauty if we can slow ourselves down to savor it.

Read an excerpt of Seiobo There Below