Accessibility links
Wild Weather Tied To Unusual Jet Stream Activity The usually well-behaved ribbon of high winds that runs eastward across North America has wandered all over the place recently, and even split in two. That's caused a whole host of extreme weather in the Northern Hemisphere, including the recent rains in Colorado, bitter cold in Florida and a heat wave in Alaska.

There has been a lot of extreme weather in the Northern Hemisphere this year, including the recent torrential rains in Colorado, flooding in Europe, bitter cold in Florida and a heat wave in Alaska. And scientists say all of it is related to some odd behavior by the powerful air currents called the polar jet stream.

The jet stream is "this ribbon of very fast moving winds that's high over our heads," says Jennifer Francis, a research scientist at the Institute of Marine & Coastal Sciences at Rutgers University. "It actually is what creates the weather that we feel here on the surface."

That's partly because the jet stream contains a lot of energy in the form of heat. Also, its winds, which can reach 200 miles an hour, help move weather systems from west to east across the country.

And the jet stream acts as a sort of dividing line, Francis says. "If it's north of you, you're in the warm air and when it's south of you, you are in generally much colder air," she says.

The jet stream does not follow a straight line — it's wavy. Francis says it usually enters the U.S. somewhere in the Northwest. "Seattle is a very typical place," she says. "And then it might dip down southward along the Rocky Mountains, and then it might shoot northward again, say, up toward the Great Lakes."

The jet stream is a fast-moving belt of winds that crosses North America from west to east. (This video has no sound.)

But this year, the jet stream has been making surprisingly dramatic swings to the north and south. And it also has split into two separate streams, says John Nielsen-Gammon, a research professor at Texas A&M University and the Texas state climatologist. 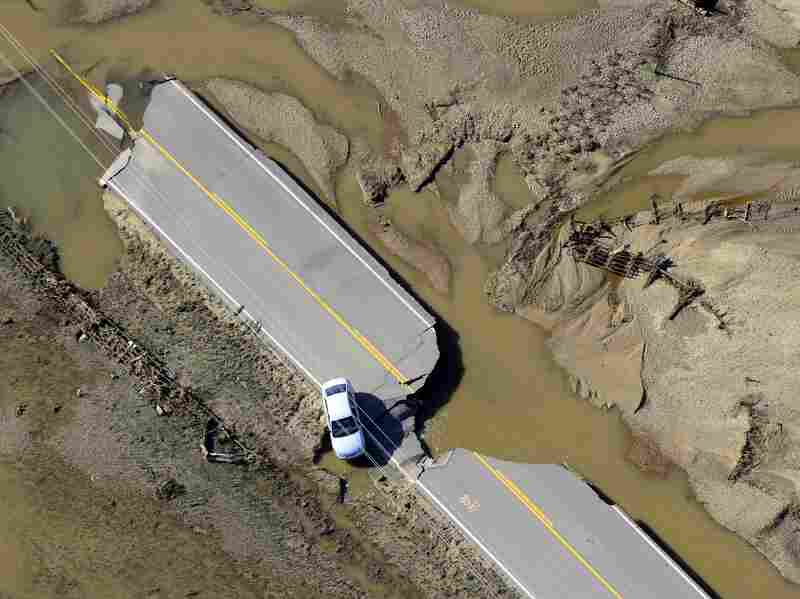 An abandoned car lies off a road devastated by floodwaters along the South Platte River east of Greeley, Colo., on Sept. 17. John Wark/AP hide caption

Back in May and June the presence of this dual jet stream contributed to flooding in the northern Alps and in Alberta, Canada, Nielsen-Gammon says. "The flood conditions took place in between the two jet streams, where weather patterns tended to move relatively slowly because they weren't being carried along by the upper-level winds," he says.

During the summer, the double jet stream produced a very strange temperature pattern along the Pacific coast, Nielsen-Gammon says. Down in Southern California it was unusually hot — in Death Valley the temperature reached 129 degrees. Meanwhile, up in British Columbia, it remained unseasonably cold.

Even farther north, in Anchorage, Alaska, residents experienced a relative heat wave, with a record number of 70-degree days. But even farther up in the Arctic, temperatures were relatively cold again.

The double jet stream also played a big role in the Colorado flooding this month, Francis says. High up in the atmosphere, one stream was carrying moist air from the Pacific to the Rockies. Then, lower down, an unusual eddy was pulling in more moist air from the Gulf of Mexico. Finally, an unusual bulge in the jet stream was causing all this weather to stall near Boulder.

When these factors come together, "you get lots of rain for lots of days, and occasionally it can produce the kind of flooding we saw," Nielsen-Gammon says.

It's not clear whether global warming contributed to the recent extreme weather in Colorado, but it is possible, Francis says. That's because the Arctic is warming up much faster than other areas, which "must have an effect on the jet stream," Francis says.

"It could be drought. It could be heat waves. It could be flooding due to prolonged rainfall," she says. "All of those kinds of patterns should be becoming more likely."

That's still a controversial idea. But it's one that's got other scientists taking a closer look at global warming's impact on the jet stream.