Accessibility links
An American Masterpiece, And A 'Menagerie' Of Stars A revival of Tennessee Williams' glorious 1945 drama opens tonight at Broadway's Booth Theater. Zachary Quinto and Cherry Jones star in the play, which is partly based on the playwright's own life and family. 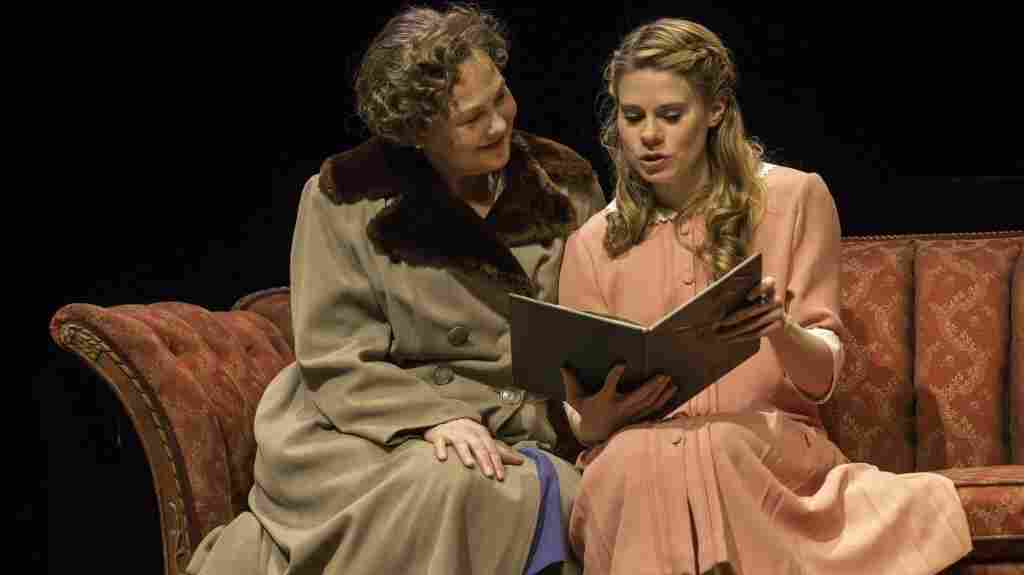 In a Broadway transfer of the American Repertory Theatre's acclaimed production of The Glass Menagerie, Cherry Jones plays Amanda, mother to the very troubled Laura (Celia Keenan-Bolger). The play cemented Tennessee Williams' reputation as an American original when it premiered in 1945. Michael J. Lutch/ hide caption 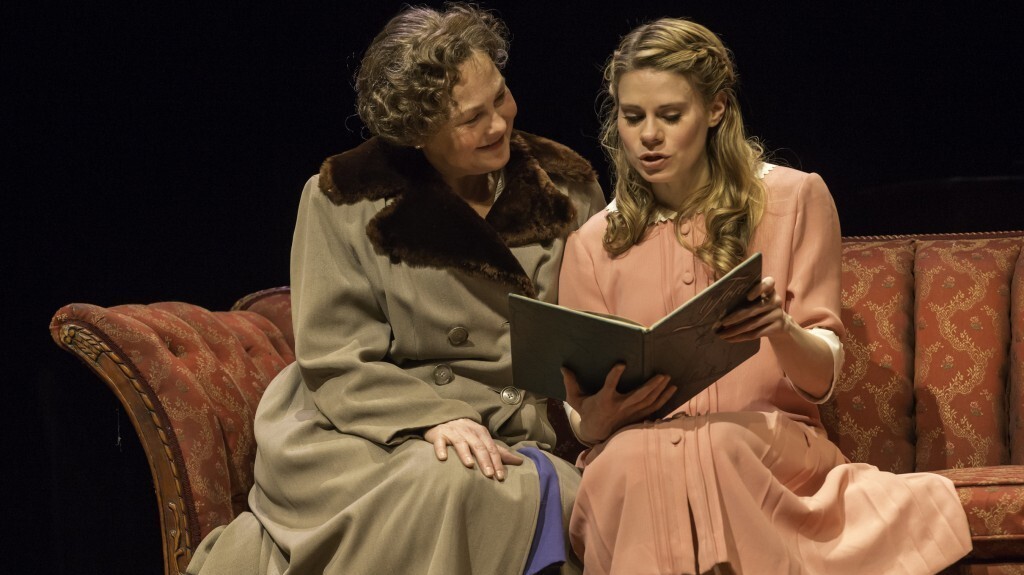 In a Broadway transfer of the American Repertory Theatre's acclaimed production of The Glass Menagerie, Cherry Jones plays Amanda, mother to the very troubled Laura (Celia Keenan-Bolger). The play cemented Tennessee Williams' reputation as an American original when it premiered in 1945.

Pop-culture aficionadoes will know Zachary Quinto as Spock in the cinematic reboot of Star Trek, and Cherry Jones as President Taylor from television's 24.

But both are accomplished stage actors as well. And tonight, they're opening on Broadway, in a revival of Tennessee Williams' classic play The Glass Menagerie.

When the audience enters the Booth Theater, they see a simple, but striking vision. Onstage, there's the scantest suggestion of a cramped apartment: no walls, just a sofa, dining-room table and a couple of other pieces of furniture, with a long tilted fire escape reaching upward. Other than that, everything's black. The whole set seems to be floating in a void.

"I want people who hate the theater to see it," says two-time Tony Award winner Cherry Jones, who plays Amanda, the iron-willed fading-belle mother at the heart of The Glass Menagerie.

"Because I really do think it's one of those productions that could change people's minds about the theater. This production takes people places they have never been before."

When Menagerie debuted on Broadway in 1945, it established Tennessee Williams as one of the greatest playwrights of his generation. Of all his plays, it was both Williams' most nakedly autobiographical and least naturalistic. His script calls for music and stage magic — characters appear out of thin air, as if conjured by Tom, the play's narrator.

More from the cast and director on the making of Menagerie:

John Tiffany On Talking Cherry Jones Into The Part

Zachary Quinto On The Physicality Of His Role

Director John Tiffany says Williams was very clear, in his stage directions, that The Glass Menagerie is impressionistic: a memory play.

"He begs us, as theatermakers, not to go down the path of naturalism," Tiffany says. "Not to have a real Frigidaire, he says, and real ice cubes tinkling in a glass. For Tennessee, that wasn't where theater was at its best; he said 'it's a place of the imagination, where poetry — not just poetry of words, but poetry of gesture, poetry of design, poetry of lighting, poetry of acting — all comes together and meets above and between the audience and actors.' And I really, really was taken by that!"

So Tiffany's production is highly stylized; there's subtly choreographed movement during the scene changes to complement the poetry of the text.

A Portrait Of The Playwright As A Young Man

Quinto, who even before Star Trek earned a fan following as the rapaciously villainous Sylar on NBC's Heroes, is making his Broadway debut as Tom, the stand-in for Tennessee Williams, whose given name really was Tom.

"For me," he says, "it is the language, it is the poetry, it is the distillation of his own life, his own experience and the people that he loved the most that are in this play."

Quinto says he read a lot of biographical material about Williams to prepare for the play — particularly about his complicated relationship with his mother and sister.

In the play, the father has abandoned his family. Tom, a young writer, works a dead-end job in a shoe factory, helping to support his determined mother, Amanda, and his sister, Laura, who's both physically and emotionally disabled. She lives out a kind of fantasy life, tending to a collection of fragile glass figurines — her glass menagerie. 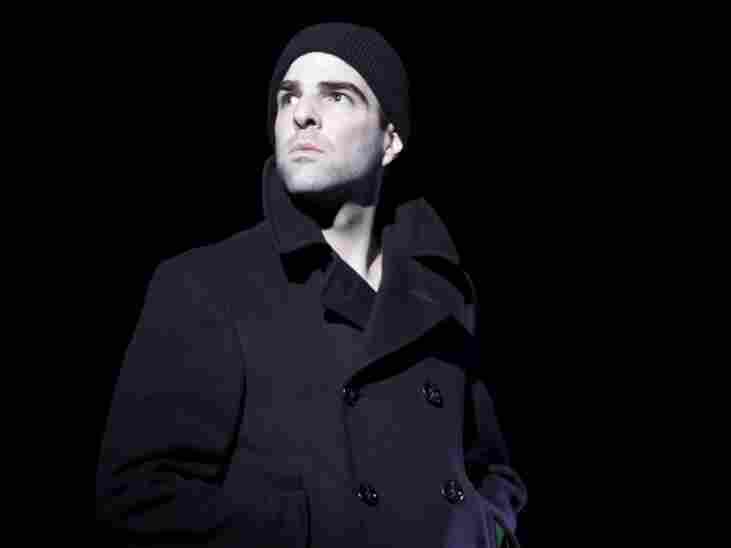 Zachary Quinto starred in an Off Broadway production of Angels in America in 2010; in Menagerie, he makes his Broadway debut as Tom, Laura's brother and a character based on the playwright himself. Michael J. Lutch/ hide caption 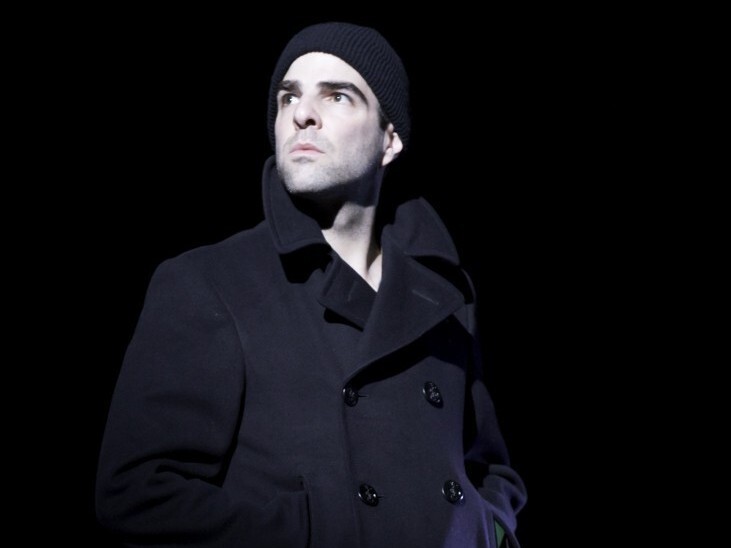 Zachary Quinto starred in an Off Broadway production of Angels in America in 2010; in Menagerie, he makes his Broadway debut as Tom, Laura's brother and a character based on the playwright himself.

In real life, Williams' sister, Rose, was diagnosed with schizophrenia, sent to a mental hospital, and lobotomized.

"How tragically her life unfolded," Quinto says, "is something that Tennessee never fully reconciled within himself or probably even forgave himself for, on some level."

Cherry Jones says all the characters in The Glass Menagerie are in desperate straits, in particular her character, Amanda.

"Her son is about to fly away, never to be seen or heard from again. And she knows it," Jones says.

"And her daughter is mentally completely stifled. She cannot move. And so it's like a parent with a severely challenged child, physically or mentally: What in the world is going to happen to that child when I'm gone?"

So Amanda sets out to find a Gentleman Caller to sweep her daughter away. The lesson they all learn, at length, and at some cost, is to be careful what you wish for.