Accessibility links
Putting Good Deeds In Headlines May Not Be So Good Good Samaritans are celebrated in the press for doing the right thing all the time, but does all that attention lower expectations for everyday behavior? 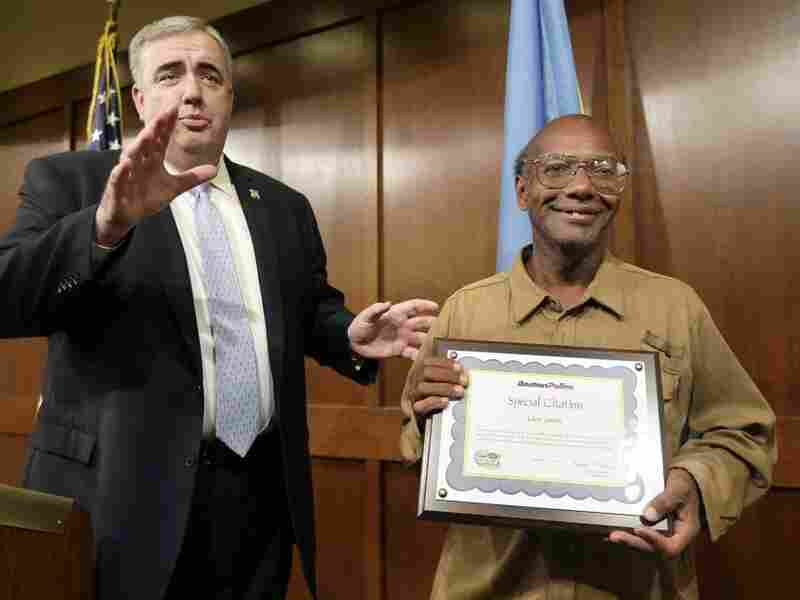 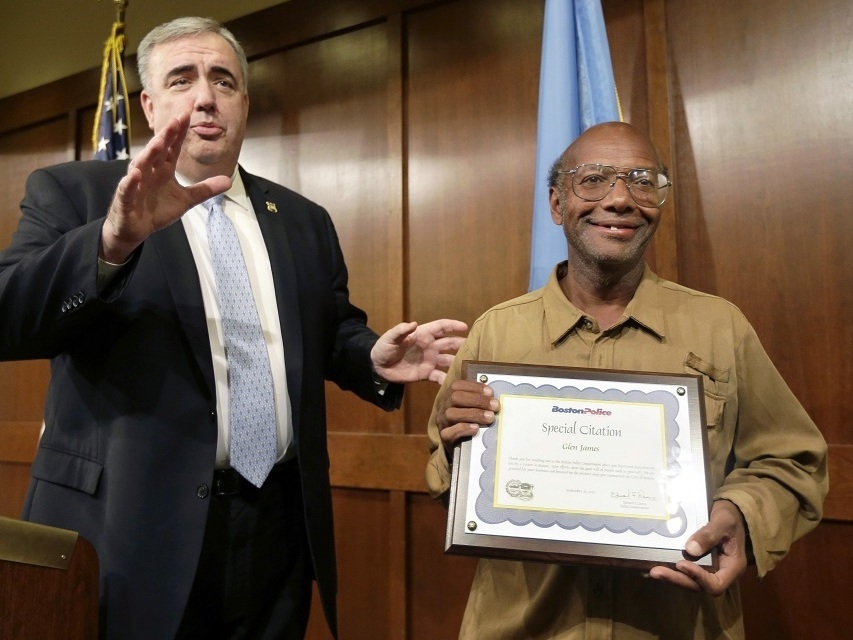 An online collection has raised more than $145,000 for a man who stumbled onto a pile of money and turned it over to police.

Glen James' story of a good deed is just one of many making headlines. It may not be exactly brand new, but public interest does seem to be piqued these days by ordinary folks making what are seen as extraordinary ethical decisions.

Some, however, question if airing this kind of "good" news is actually good.

A Series Of Good Deeds

James' story — he's the homeless man in Boston who turned in a backpack filled with $42,000 — went viral. So did another recent story about a Dairy Queen manager from Minnesota who stood up for a blind man who didn't know he'd been robbed.

The blind man dropped a $20 bill, and a woman picked it up and pocketed it. The manager threw her out of the restaurant and then handed the man $20 from his own pocket.

Just a few weeks before that, stories swirled about four college football players who found themselves inside a store that was accidentally left unlocked.

Instead of just taking what they wanted, they left every penny they owed at the checkout. One television report called it "a story of honesty that's become a shining beacon of righteousness."

"There are lots of people who suffer from moral myopia, and so when you see this good happening, it renews some of your faith," says University of Texas professor Mimi Drumwright. She says these are the types of stories you hope will inspire copycats: "The reports of these good deeds probably are going to begat more good deeds, and that is a good thing."

Already, countless strangers have been paying it forward with $20 tips to the Dairy Queen worker, and everything from jobs to gift cards for the other do-gooders — not to mention the small fortune for Glen James.

But at the risk of twisting any of these precious good-news stories into more bad news, experts say there may be a downside to overplaying it.

"They did do the right thing, and that's commendable. But heroic? I think not," says Carnegie Mellon ethics professor Peter Madsen. He sees the high praise swirling around the stories as a kind of moral grade inflation.

"They had an obligation to do what they did. It was not above and beyond the call of duty. They really just did what we should have expected them to do," he says.

When you celebrate what should be ordinary behavior as extraordinary, experts say, it sends a dangerous message.

At Estonia's Bank Of Happiness, Kindness Is The Currency

"I do worry about a culture in which people are giving selves credit for not having done terrible things. It sets a really low bar for what it takes to be a good person," says London Business School professor Daniel Effron. Effron, who teaches behavioral ethics, says feting folks for what he calls "the immoral road not taken" could actually encourage bad behavior.

When guys with integrity get put on a pedestal, he says, the implication is that they're exceptional — far greater than the rest of us.

Others, however, suggest the reason these stories are seen as remarkable is not because we diminish ourselves, but because of the way we diminish these particular do-gooders.

"In this particular case — I'll just say it — the homeless man was an African-American guy, and most of the young football players who paid for their goods were African-American," says Candace Upton, who teaches moral psychology at the University of Denver. "I don't think it's beyond this culture at this time to say that we do have lower expectations, which is unfair. But that's what sets up the big surprise, and hence probably the big response."

Giving good Samaritans celebrity treatment may also have the unintended consequence of creating monster expectations, kind of like a kid expecting a prize every day that he's not late for school. You have to be careful not to go overboard, as one expert put it. But celebrating people for doing the right thing is still the right thing to do.