Accessibility links
Point Of View: How So Many Rooted For 'Breaking Bad's' Walter White How did the creators of Breaking Bad get millions of fans to stick by a meth-cooking drug lord season after season? The crafty use of an old editing technique in the pilot let us see the world through Walt's eyes, a film psychologist says, making it easier to excuse his immoral choices later on. 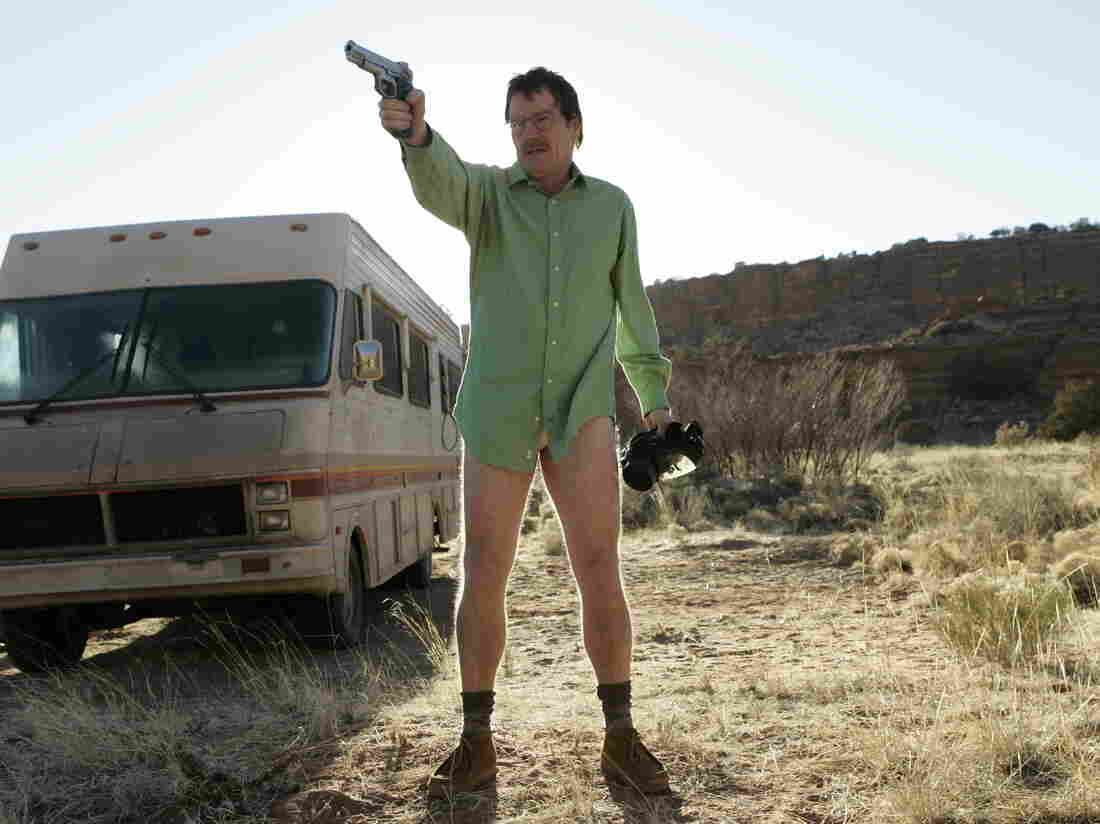 How could you not feel sorry for this guy? Vince Gilligan even admitted that he loaded up the Breaking Bad pilot with "reasons to give a damn about" Walter White. Doug Hyun/Courtesy of AMC hide caption 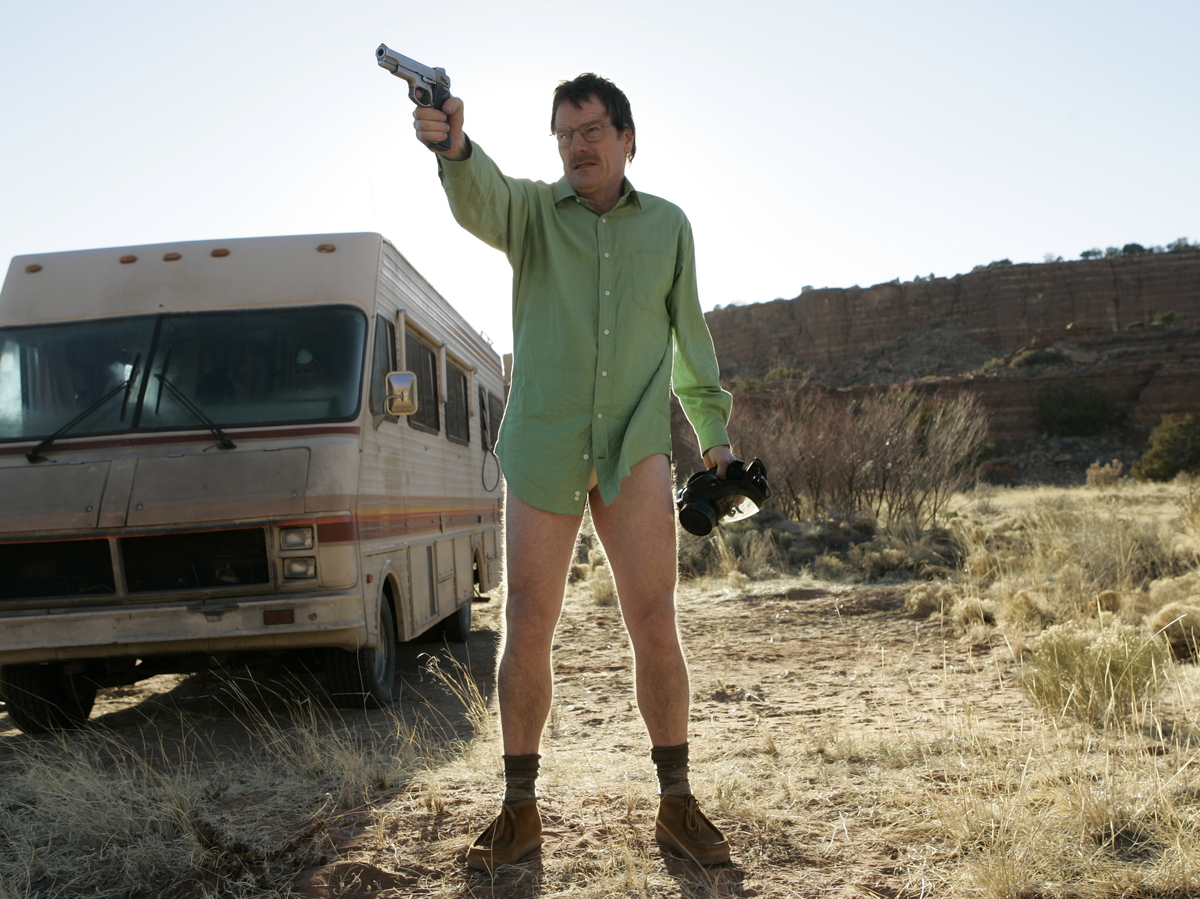 How could you not feel sorry for this guy? Vince Gilligan even admitted that he loaded up the Breaking Bad pilot with "reasons to give a damn about" Walter White.

If you were still cheering for Walter White at the start of the sixth season (or, as AMC contracts call it, the second half of the fifth season), a mustard stain on a doctor's jacket might be one reason why.

Just last month, the show's creator, Vince Gilligan, marveled at the fact that, 56 episodes into Breaking Bad, fans were still rooting for the meth-cooking drug lord. "I would have guessed at this point that he would have lacked sympathizability," he told The New York Times.

So why did at least some fans stick by Walt's side despite his involvement in nearly two dozen murders and a drug empire that spans two continents?

It wasn't just luck. Gilligan and his team used a whole bag of tricks to get viewers in Walt's corner — and stay there — says psychologist Joseph Magliano, of Northern Illinois University.

A crafty use of an old film editing technique helps us understand what Walter White feels when he's diagnosed with lung cancer.

Magliano is one of a handful of researchers who are trying to figure out how movies and television manipulate our thoughts and emotions. For Breaking Bad, he says, the creators quickly build up sympathy for the nerdy chemistry teacher by letting us see a world full of obstacles through Walt's eyes.

"For starters, the writers packed the pilot with reasons to feel sorry for Walt," Magliano says. He's struggling financially. He has a son with cerebral palsy, a baby on the way and now, he is dying of cancer. "Then we can explain his decision to sell drugs," Magliano says. "It's for a noble reason: to protect his family."

But for viewers to sympathize with Walt through all the murders, lies and immoral choices, Magliano says, they also needed to identify with him. To do that, the producers of Breaking Bad pulled out one of the oldest tricks in the film business: the point-of-view sequence. 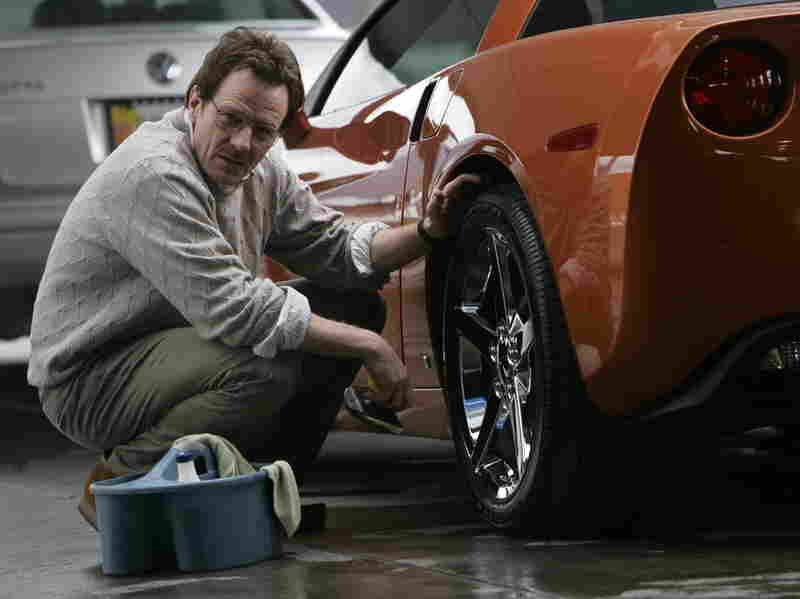 The creators of Breaking Bad judiciously use the point-of-shot sequence in critical scenes of the pilot, including when Walter White is forced to clean the tires of student's car. Doug Hyun/Courtesy of AMC hide caption 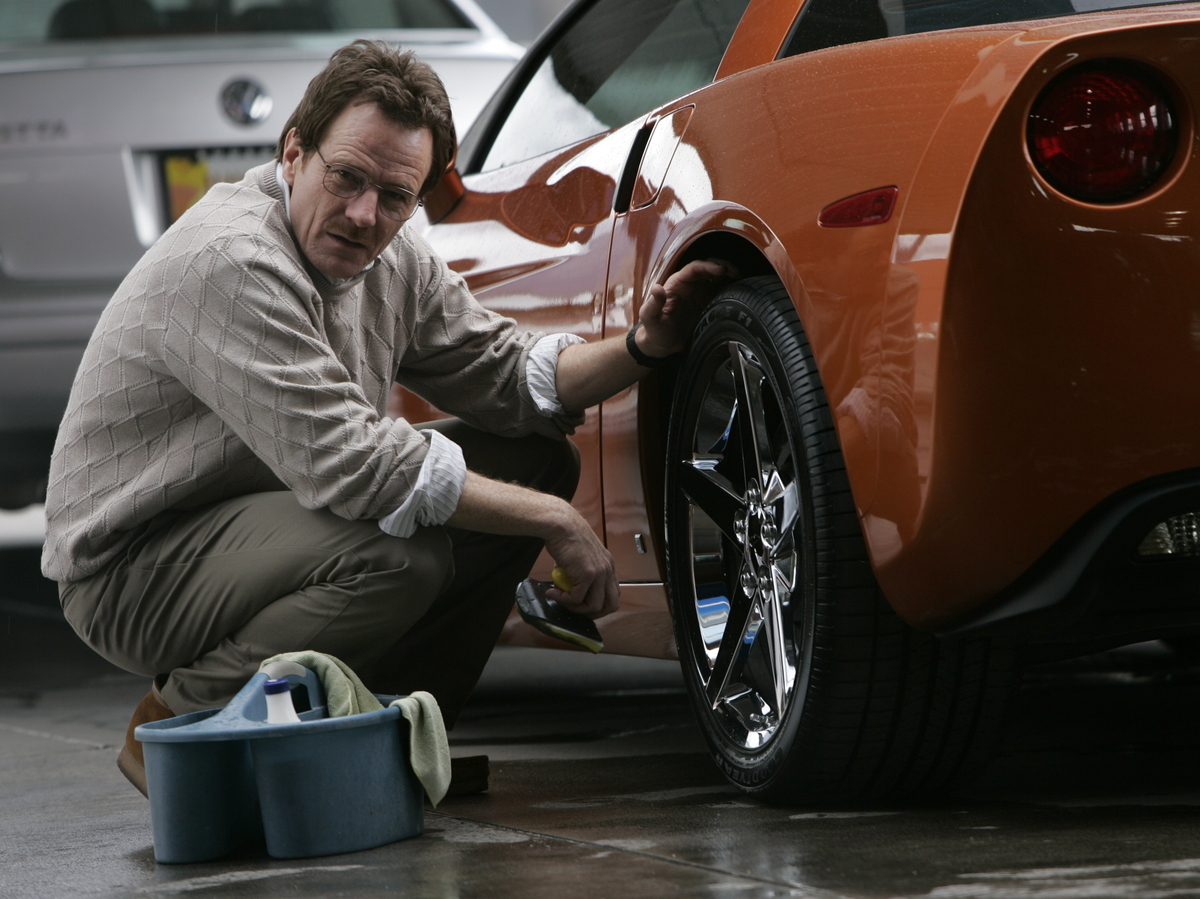 The creators of Breaking Bad judiciously use the point-of-shot sequence in critical scenes of the pilot, including when Walter White is forced to clean the tires of student's car.

Back in the 1920s, Russian filmmaker Lev Kuleshov pioneered the editing technique, which helps viewers get inside a character's mind.

"You show a close-up shot of an actor's face," Magliano says. "Then you show a shot of what he's looking at — say for instance, a candy bar. Then the camera cuts back to the actor's face."

The audience immediately has an idea of what the character is thinking, even when he is silent, Magliano says. "We just know, 'Oh, he's hungry.' " (Alfred Hitchcock was the master of point-of-view shot sequence and gives a lovely explanation.)

"Depending on how the actor is emoting and his facial expressions, we can begin to make inferences about a person's internal state," Magliano says.

Gilligan and his team sprinkled the Breaking Bad pilot with these point-of-view shot sequences from Walt's perspective. They used one during one of the most critical moments of the series: when Walt first finds out he's dying of lung cancer.

The camera first shows Walt's face. Then it turns to a very close-up shot of the doctor's mouth and eventually focuses on a mustard stain on the doctor's shirt. Finally, the camera returns back to Walt.

By showing us what Walt is staring at, the creators put us in Walt's shoes, Magliano says. "He looks extremely confused. He's clearly in a state of confusion." The surreal shots of the doctors mouth and mustard stain magnify that confusion, and juxtaposed with Walt's expression, trigger a similar feeling in the audience.

"We're able to recognize a large variety of emotions from subtle facial expressions. It's automatic," Magliano says. "But there's also evidence that we feel some of these emotions, too. If we see somebody sad, it activate parts of our brain that regulates emotion, that gives us a sense of sadness."

Another key example of the point-of-view shot sequence in the pilot is when Walt is caught cleaning the tire of his student's car. In this case, we see the embarrassment on Walt's face while experiencing first hand the shame of having the student snap a picture.

All of these sequences help us to sympathize with Walt and to understands his motivations, Magliano says. Then as the series unfolds — and Walt becomes darker and darker — those first impressions stick our minds and we make excuses for this immoral behavior, just like we might do for a close friend or relative.

Point-of-view work is ubiquitous in movies and TV, but Magliano thinks it's particularly powerful in Breaking Bad because of Bryan Cranston's acting chops.

"He is a master at controlling his facial expressions and showing a complexity of emotions," Magliano says. "We saw it in Malcolm in Middle, and now we see it here. All that emotion gives us a greater understanding of Walt's situation, what he's thinking," he says.

Gilligan even admits that Cranston's face helped to stack the deck in Walt's favor. "I also knew that he had this basic underlying humanity that just comes through. That kind of just beams out of his eyes or his expression," Gilligan told The New York Times. "I don't know where it comes from, but you just root for this guy."