Accessibility links
Book Review: 'Kansas City Lightning.' By Stanley Crouch Stanley Crouch, one of the nation's most prominent jazz critics, is the author of the just-released Kansas City Lightning -- part one of a biography of Charlie "Bird" Parker. Reviewer Craig Morgan Teicher says the story starts a little slowly, but when Parker picks up the saxophone, Crouch's writing cooks. 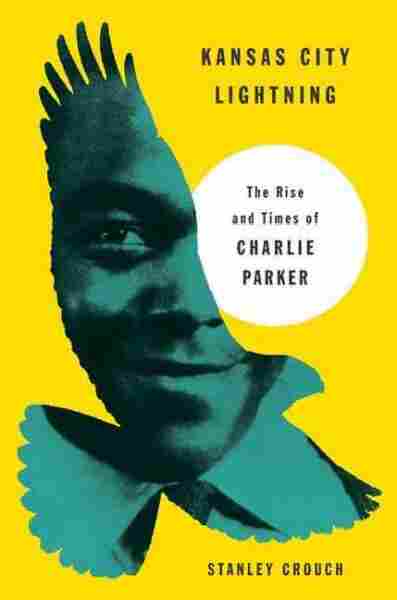 "The rhythm section had him by the tail, but there was no holding or cornering Bird. Disappearing acts were his specialty. Just when you thought you had him, he'd move, coming up with another idea, one that was as bold as red paint on a white sheet."

That's the first image Stanley Crouch gives us of Charlie Parker playing the sax. It sounds a lot like a fight scene from an action movie — and, at its best, this long-awaited book imparts that kind of excitement on Parker's life.

Parker was a genius who lived fast and died young, revolutionizing an art form in a few short years. He funneled the blues, ragtime and hot jazz of Louis Armstrong, as well as the classical and pop music strains of Duke Ellington, into a new, artsier form of jazz: bebop, all about rapid-fire flurries of notes and emotions. There are a handful of biographies of the legendary musician, but Kansas City Lightning is as close to a definitive one as we have.

Stanley Crouch, one of America's most prominent jazz writers, is known for his sharp, often controversial opinions, for his excitable, blustery prose, and for writing about jazz and everything else in the broader context of African-American history. He's been working on this book since the early '80s, and it's taken on mythical status among jazz fans: a major critic's take on a major musical innovator.

It makes sense that Crouch would tackle Parker. Crouch is known as something of a traditionalist — he's a co-founder of the generally conservative Jazz at Lincoln Center — and Parker helped define the version of jazz Crouch harkens back to. To listeners of today's edgy jazz, Parker's lightning-fast takes on standards, show tunes and original compositions could sound basic. Crouch, a heavy believer in the virtues of swing, melody and virtuosity, understands why they're not, and he's used to explaining himself to a wide general readership.

Kansas City Lightning — part one of a proposed two-volume biography of Parker — feels like a labor of love, strong on passion. The chapters on Parker's early life move somewhat slowly. Part of Crouch's ambition is to tell the story of black America in the first half of the 20th century through Parker's story, and sometimes sprawling generalizations overwhelm the action, as when Crouch offers mouthfuls like this: "His bloodline was both cosmopolitan and all-American, mingling African, Indian (which is to say Asian), and European stock. And the Wild West in which he grew up was shaped by the same three sources that constituted his genetic line." But by the last third of the book, when Parker is playing music, Crouch really cooks. Mixing his critical chops with his passion for Parker, he crafts lush scenes and crackling music writing.

Crouch exhaustively details Parker's childhood and adolescence in mob-run Kansas City, Mo., the sordid hotbed of jazz, where the nightlife was endless and "everybody was looking for fun, for a vacation from Depression conditions, for a thrill and a laugh." He turns Parker's story into as gripping a narrative as he can, fleshing out well-known details with anecdotes and first-person accounts.

Parker was a bit lazy and spoiled, but a good-natured boy, one who grew up pampered by his adoring mother. As a teenager he fatefully fell in love with and married his neighbor, Rebecca Ruffin. He was eager and excitable, though unfocused — until he found his horn. After a few humbling experiences, including being laughed off the stage at a late-night jam session, Parker started "woodshedding," practicing to the exclusion of almost all else. Crouch quotes him claiming that he would "put in at least from eleven to fifteen hours a day."

Most fun is watching Parker go from stumbling wannabe to a suddenly dead-serious genius-to-be. The change began when Parker fell under the influence of a prominent Kansas City musician, Crouch says: "One night, as he was listening to Lester Young jamming at the Subway, he began to understand what the tenor saxophonist was doing, and he broke out into a cold sweat."

Coleman Hawkins And Charlie Parker Were Not Particularly Good Actors

In the vivid and exciting chapters that follow, Crouch shows in minute detail how Parker engaged in a prolonged apprenticeship in the late 1930s. Still in his late teens, he plays under various bandleaders in Kansas City before earning his chance in the spotlight. He follows his mentor Buster Smith to New York, with a stop along the way in Chicago, where he lives like a hobo, literally riding the rails. In New York, he must prove himself all over again in late-night jams.

Equally vivid are snapshots of Parker's drug-addled off-hours, as his problems with morphine and heroin begin, and the steady dissolution of his marriage; at one point, he even pulls a gun on Rebecca. There is also the sad moment, now a part of jazz legend, when Parker asks his wife to let him go: "Rebecca, you are a good person ... I love you. But I believe I could become a great musician if I were free ... Please free me, Rebecca."

Crouch is a critic by trade, not a biographer, and there's less music writing here than one might want. But there are examples throughout the book of Crouch's accessible and insightful criticism. Consider his description of how increasing virtuosity enabled "musicians of Charlie Parker's era to create a new experience of time ... a kind of control of the present." That's as crisp and deep an explanation as you'll find of some of what makes jazz jazz.

Jazz fans will want to read this book, as much to check in with its author as for its subject. But the real fun will most likely come in the second volume, when Parker takes the jazz world by storm and becomes one of its biggest celebrities. Meanwhile, this is a thorough and entertaining account of one of the greatest rises — and the prelude to one of the greatest falls — in jazz history.