Accessibility links
Interview: Paul Muldoon, Editor Of 'The Waste Land' By T.S. Eliot This year marks the 125th birthday of Nobel Prize-winning poet T.S. Eliot. To celebrate, a re-issue of the first edition of his seminal poem has just been published, with an introduction by New Yorker poetry editor Paul Muldoon. NPR's Scott Simon speaks with Muldoon about the poem's lasting influence. 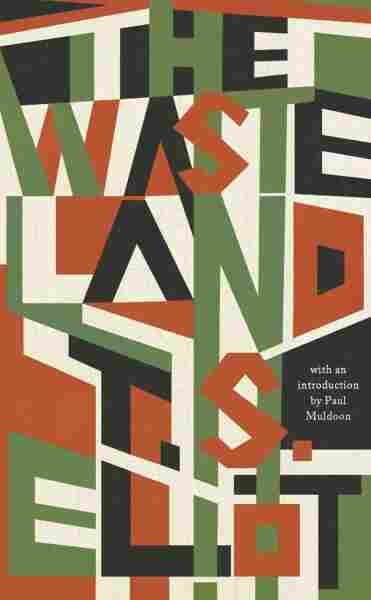 What do you get a Nobel Prize-winning poet for his birthday?

The poet, in this case, is T.S. Eliot, and this year he would have turned the intimidating age of 125. It's a tough question, but New Yorker poetry editor Paul Muldoon has got an answer: a new re-issue of the first edition of Eliot's groundbreaking poem, The Waste Land.

It's a jumbled, odd and beautifully dissonant poem — well-loved, but sometimes hard to like. The opening lines might be the most famous phrase in modern literature: "April is the cruelest month, breeding / Lilacs out of the dead land, mixing / Memory and desire, stirring / Dull roots with spring rain."

A Pulitzer Prize-winning poet himself, Muldoon wrote the preface to the new edition. He speaks with NPR's Scott Simon about the extraordinary night the poem was first bought, the music behind its lines and the poem's place in its own time and in the present.

On how one young publisher, Horace Liveright, bought two literary classics in a single night

"You know, it's an extraordinary story. The setting was a dinner party, and ... coming out of it, Liveright found himself the possessor of the rights to [James Joyce's] Ulysses and also The Waste Land. Ulysses and The Waste Land, as we know, stand as the twin portals of what we would describe in literary terms as 'high modernism.' "

On the world and time from which The Waste Land emerges

"It's very hard for us now to think of the impact of the First World War, and indeed some of the arts just prior to the First World War — the way in which the arts were beginning to reflect the sense of fracture, of structurelessness, of what Eliot refers to in the poem itself as 'the heap of broken images' that would shortly become Europe.

"It's very difficult to disentangle cause and effect in all of this because, for example, we know that from 1912 onwards — a very significant year in literary history — [Pablo] Picasso and [George] Braque were representing the world in broken-down versions: cubism, where the fragments of the world were offered to us. We remember, of course, the impact of photography, where we began to realize that the world could be seen frame by frame. We think of Marcel Duchamp's 'Nude Descending a Staircase.' "

T.S. Eliot and the Power of the Mississippi

T.S. Eliot and the Power of the Mississippi

On understanding the poem as a night at a music hall

"Eliot, of course, was very interested in popular music. He was always interested in musical constructs. We remember that some of his very early poems were called 'preludes,' and of course, we recall that his later poems were known as Four Quartets. So, musical structures have always been very significant in his poetry.

"In this particular case, I think of this as a night at the music hall, with various people showing up and doing a little turn, a lot of comedians showing up, and giving some sense of the London of that era, in all its raunchiness, of course, and also in all its splendor."

On the poem's lasting impact on readers

"It has never lost its glamour. It has never failed to be equal to both the fracture of its own era and what, alas, turned out to be the even greater fracture of the ongoing 20th century and now, it seems, the 21st century."

On "Death by Water," the fourth section of the poem

"One of the themes that interested Eliot was the notion of rebirth and the various images, particularly in Christian iconography, associated with rebirth — one of them being the water of baptism. And in the case of this short section of the poem, section four, there's an overturning of that idea, a focusing on death by water:"

Phlebas the Phoenician, a fortnight dead,
Forgot the cry of gulls, and the deep sea swell
And the profit and loss.
A current under sea
Picked his bones in whispers. As he rose and fell
He passed the stages of his age and youth
Entering the whirlpool.
Gentile or Jew
O you who turn the wheel and look to windward,
Consider Phlebas, who was once handsome and tall as you.

Read an excerpt of The Waste Land