Accessibility links
Interview: Stephen Kinzer, Author Of 'The Brothers' Sharing power in the Eisenhower administration, John Foster Dulles and Allen Dulles were the forefathers of using covert operations to upset foreign governments. Journalist Stephen Kinzer, who wrote a book on the siblings, says Americans are still paying the price for them. 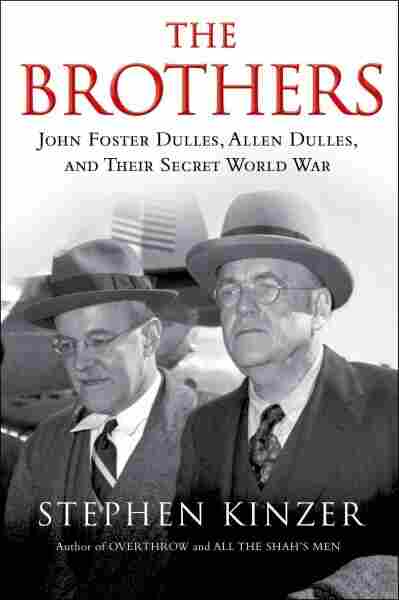 Time To 'Reset' The Course Of U.S. Foreign Policy?

John Foster Dulles and Allen Dulles were the forefathers of using covert operations to upset foreign governments — with the aim of overthrow.

They learned the reach of American power abroad when they were partners at an influential New York law firm. Later, with John Foster Dulles serving as secretary of state and Allen Dulles as CIA chief, they shared power in the President Dwight Eisenhower's administration.

In August, the CIA admitted to its role in ousting the democratically elected leader of Iran, Mohammed Mossadegh, back in 1953. That was just the first in a long line of foreign governments toppled by the influential brothers during the Cold War.

In The Brothers: John Foster Dulles, Allen Dulles, and Their Secret World War, journalist Stephen Kinzer examines their rise to power and how their personal relationship influenced their professional partnership.

"The remarkable thing about the Dulles brothers in power was that they functioned so closely together that no other kinds of consultation were necessary in order to launch these terribly far-reaching operations," Kinzer tells NPR's Arun Rath.

"Looking back, you can see that the Dulles brothers were waging a constant war during the 1950s, and we're paying the price of the blowback of that war right now," he says.

On their sibling cooperation

On how the brothers triggered a six-year occupation of Cuba

"John Foster Dulles was a young associate, still in his 20s at Sullivan and Cromwell, when one of the partners called him in and said, 'We've got problem in Cuba. There's been an election. And the liberals, who want to limit the power of American companies in Cuba, have won.'

"So John Foster Dulles got on the train. He went to Washington. He went to see his uncle, the secretary of state. And he told his uncle, 'We need to send two warships to Cuba and land marines in Cuba to force the liberals to call off their revolution demanding that the election be recognized.'

"Those warships were sent. The next day they began a six year occupation of Cuba. That all began because of a threat to American companies that were represented by the Dulles brothers."

On what's changed in the American mindset since the Dulles era

"Particularly in the reaction to the Syria bombing, I'm beginning to wonder if something profound isn't changing in the minds of at least some Americans.

"People are looking at each other and saying, 'I can't get a job and my leaders are telling me I should be focusing on fixing Syria.' I think the disconnect that that represents is slowly dawning on some Americans. Maybe we finally are burying John Foster Dulles and Allen Dulles."

Read an excerpt of The Brothers