Accessibility links
A Short History Of Government Shutdowns Drawn-out fights over spending bills are nothing new for Congress. But before a 1980 ruling by President Carter's attorney general, the rest of the country barely noticed. That's because when lawmakers reached a budget stalemate back then, the federal workforce kept on working.

From 'Morning Edition': NPR's Scott Horsley on the history of shutdowns

A Short History Of Government Shutdowns

From 'Morning Edition': NPR's Scott Horsley on the history of shutdowns 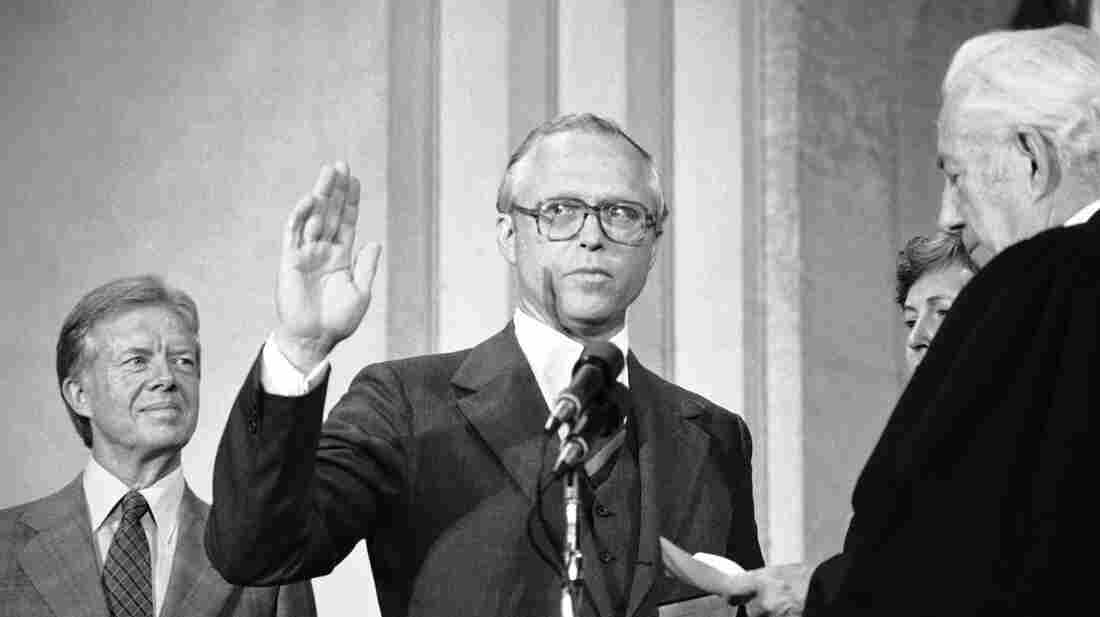 With President Jimmy Carter watching, Benjamin Civiletti is sworn in by Chief Justice Warren Burger as U.S. attorney general on Aug. 16, 1979. The following year, Civiletti issued a legal opinion saying that federal work cannot go on until Congress agrees to pay for it. AP hide caption 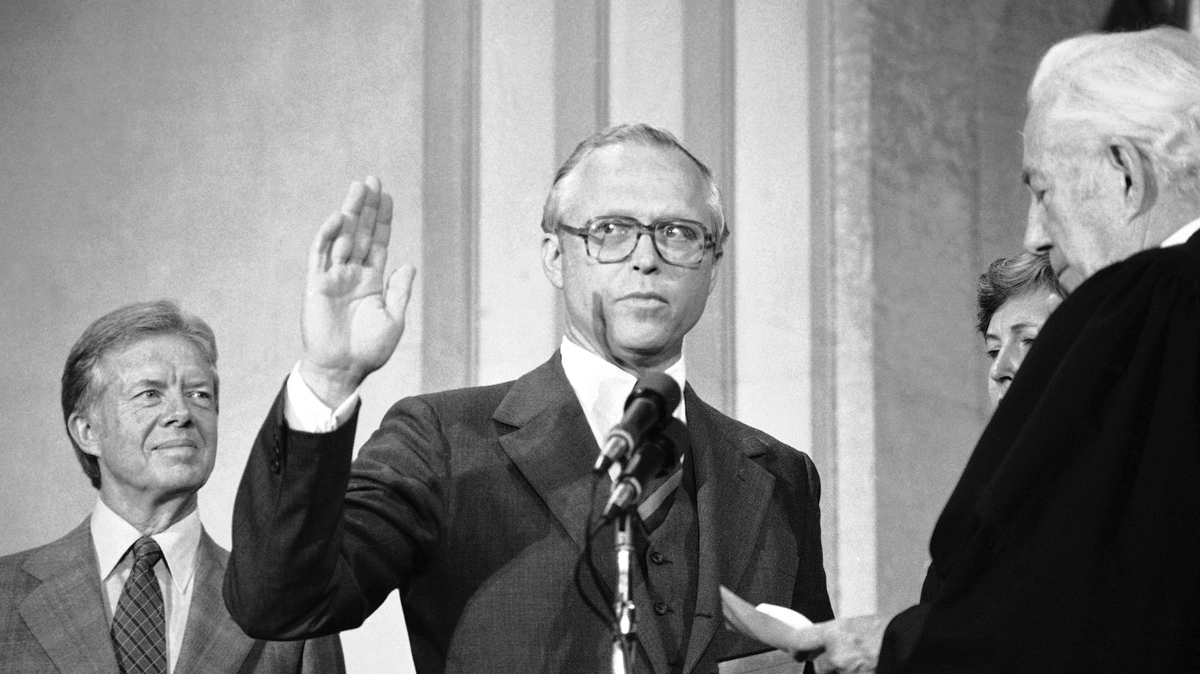 With President Jimmy Carter watching, Benjamin Civiletti is sworn in by Chief Justice Warren Burger as U.S. attorney general on Aug. 16, 1979. The following year, Civiletti issued a legal opinion saying that federal work cannot go on until Congress agrees to pay for it.

Drawn-out fights over spending bills are nothing new for Congress. But that's where the fights used to stay: in Congress. The rest of the country didn't have to pay much attention to countdown clocks and all this drama.

"In the '60s and '70s down until 1980, it was not taken that seriously at all," says Charles Tiefer, a former legal adviser to the House of Representatives, who now teaches at the University of Baltimore Law School. In the old days, he says, when lawmakers reached a budget stalemate, the federal workforce just went about its business.

"It was thought that Congress would soon get around to passing the spending bill and there was no point in raising a ruckus while waiting," he says.

That easygoing attitude changed during the last year of President Jimmy Carter's administration. That's when Attorney General Benjamin Civiletti issued a legal opinion saying government work cannot go on until Congress agrees to pay for it.

Civiletti later issued a second opinion with a less strict interpretation — allowing essential government services to continue in the absence of a spending bill. But even with that exception, the stakes of a legislative standoff had been raised — which could be why lawmakers suddenly got serious about making deals.

In the years leading up to Civiletti's opinion, budget standoffs lasting a week or more were commonplace. But after the opinion, no standoff lasted more than three days until the epic government shutdowns of 1995.

"It was a calculated gamble on the part of the speaker, Newt Gingrich," says Steve Bell, who was a Republican congressional aide. The new Republican majority in Congress decided to push their spending fight with President Clinton to the limit, even if it meant shutting down the government.

Bell, who's now with the Bipartisan Policy Center in Washington, says the Gingrich gamble didn't pay off, except for President Clinton.

"The president wasn't blamed," says Bell. And "the amount of money we saved over that government shutdown literally is almost a rounding error. So we went through all of this for almost no savings, net-net, and we successfully re-elected someone that we thought we were supposed to defeat."

As the 1995 shutdowns dragged on, more and more federal employees were called back to work as the definition of what's "essential" gradually expanded. J. David Cox, a Veterans Administration nurse at the time who now heads the American Federation of Government Employees, says that damaged morale, because while federal workers eventually received back pay, they didn't get paychecks during the shutdown itself.

A handicap for lawmakers is that the White House makes the call of which employees are deemed essential and should keep showing up for work. So even though Obamacare has been the main bone of contention in this year's fight, President Obama insists the new health insurance exchanges will open on schedule Tuesday, even if much of the rest of the government shuts down.