Accessibility links
Economists Say Shutdown Will Hurt, But Hard To Add It Up Disruptions in government services will slow growth, at least in the short term. But economists say they can't refine their predictions because they have no idea how long the shutdown might last or how many federal workers may be furloughed.

Economists Say Shutdown Will Hurt, But Hard To Add It Up

Economists Say Shutdown Will Hurt, But Hard To Add It Up 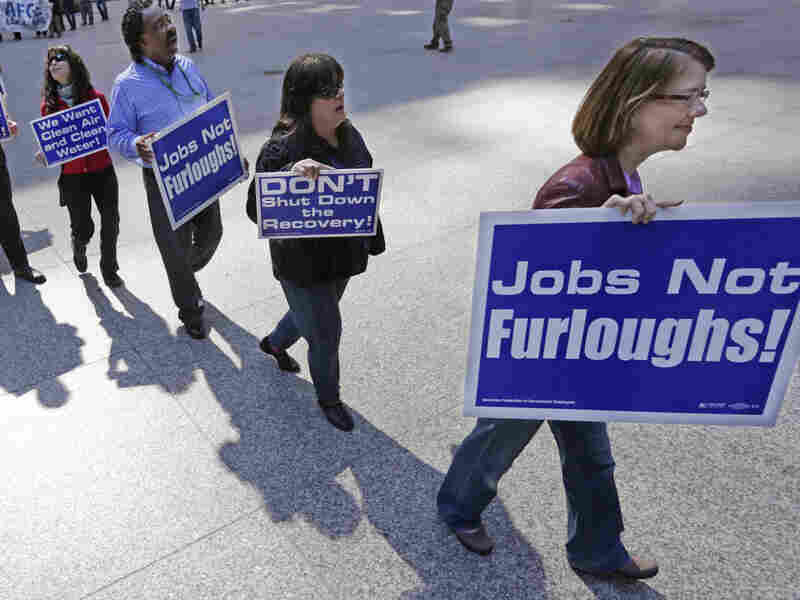 Government workers protest the possibility of a federal shutdown in Chicago. Nearly 100 employees from federal agencies including the Environmental Protection Agency and the Department of Housing and Urban Development rallied in a downtown plaza Monday. M. Spencer Green/AP hide caption 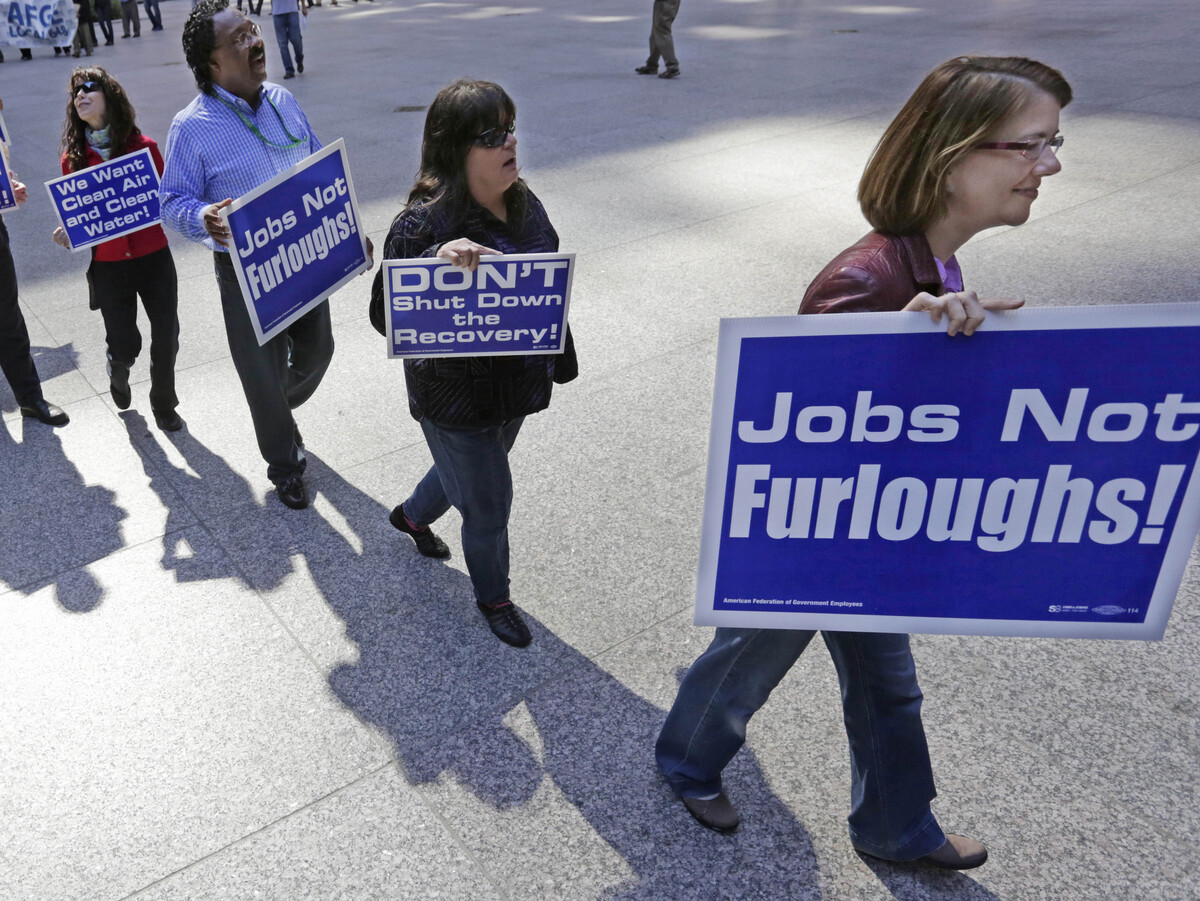 Government workers protest the possibility of a federal shutdown in Chicago. Nearly 100 employees from federal agencies including the Environmental Protection Agency and the Department of Housing and Urban Development rallied in a downtown plaza Monday.

After weeks of wondering what would happen, Americans now know:

2. That will slow economic growth, at least in the short term.

But just how far the damage will go is far from clear. Economists say they can't refine their predictions because they have no idea how long the shutdown might last or how many federal workers may be furloughed.

Among the questions they are pondering: If, as is now expected, the Labor Department fails to release the September unemployment report on Friday, will that lack of key data rattle investors?

"Getting some clarity would be a big relief for the markets," said John Canally, economist for LPL Financial, a Boston-based financial services firm.

Uncertainty about the scope and duration of the federal disruption reflects the division of responsibilities among branches of government. It's up to Congress to agree on a funding mechanism to reopen the government. But it's up to the Obama administration to determine exactly which workers are "essential" for the protection of life and property.

In some federal workplaces, the "essential" line might be bright and clear. For example, at the Smithsonian's National Zoo in Washington, visitors will be turned away, but pandas will get fed.

But other calls will be much more complicated, and directions from supervisors have been murky so far, according to Michael Roberts, a Food and Drug Administration employee who serves as president of Chapter 212 of the NTEU, a union representing workers at several federal agencies.

"We've been getting conflicting information, with no clear guidance at the moment," Roberts said.

To the best of his understanding, many workers may be told to stay home for a few days but then could be recalled as "essential." For example, imports may start coming into this country without inspection — until someone determines that certain shipments represent "the highest level of risk," he said.

So exactly how high does a risk have to be before inspectors get called back? No one knows, and the answer may be a moving target, he said. "You would think we'd have an idea what's going on by now," Roberts said.

IHS Global Insight economist Paul Edelstein says that if Congress were to keep the shutdown going for, say, three weeks or more, then the gross domestic product — i.e., the sum of all goods and services — would lose momentum. Instead of growing by the expected 2 percent this quarter, the economy might slow to just a 1.5 percent pace, he said.

That would translate into 75,000 fewer net jobs for the economy this fall, coming on top of the loss of income for those 800,000 workers' salaries.

The government shutdown will "throw a wrench into the gears" of a recovering economy, President Obama warned Monday.

FDA worker Roberts said the loss of federal paychecks will have an impact on many families, from park rangers to secretaries to inspectors. "We have people who are struggling and living paycheck to paycheck," he said. "They don't know when or if they will be paid."

That means lots of households will be cutting back on spending, and that worries store owners.

"Our industry is keenly concerned," said Greg Ferrara, spokesman for the National Grocers Association. "There's a lot riding on this for us."

Many restaurant owners are worried, too. Andy Thompson, a co-owner of the Thornton River Grille in Sperryville, Va., says many of his customers come to visit the nearby Shenandoah National Park — especially now during the peak of leaf-viewing tourist season.

If federal workers in Virginia lose paychecks and the park gates remain locked for long, then his restaurant could feel the pinch.

But he said business owners have come to expect poor economic results from Congress when it comes to orderly budget planning. "Everyone has that feeling: Why can't they get it together?" he said.