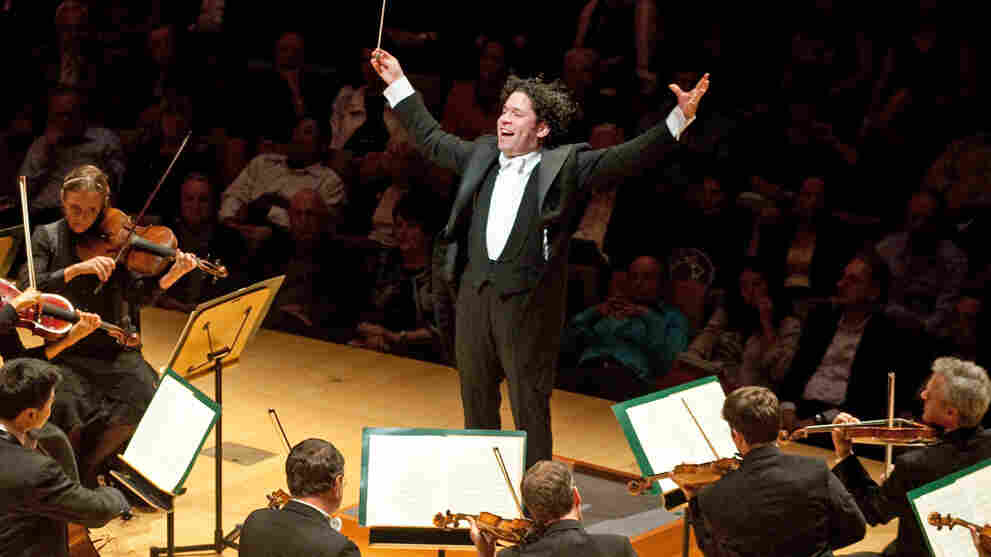 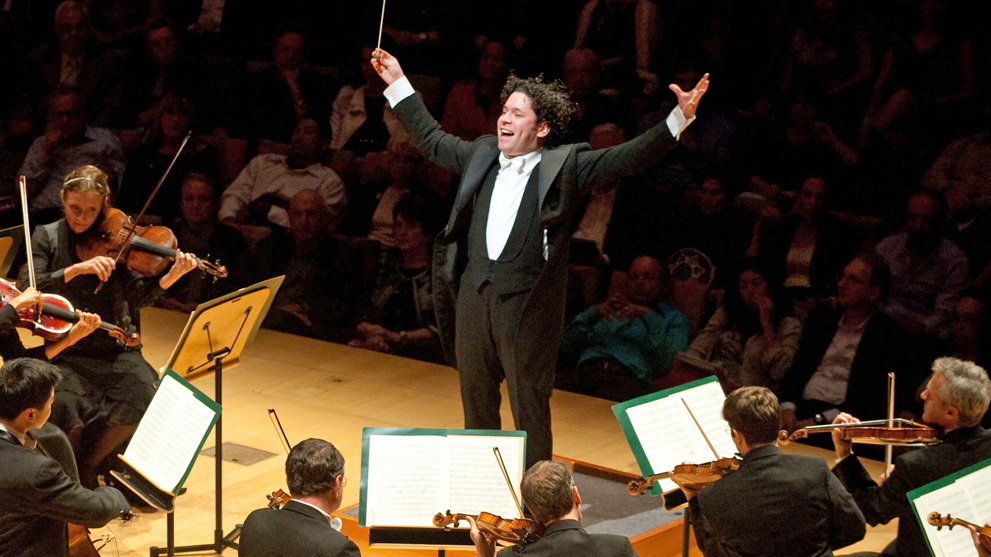 Not unlike childbirth, the odyssey of fits and starts that preceded the completion of Walt Disney Concert Hall in Los Angeles hurt like hell at the time. But today, 10 years later, Angelenos marvel on a daily basis at architect Frank Gehry's dazzling offspring: the incandescent beauty of its billowing metallic sails, especially at dusk, in L.A.'s famed purple-pink fading light; its iconic status as an architectural symbol of the city and its warm and vibrant acoustics.

Those acoustics will be on display Saturday night, when NPR Music joins KUSC for a live webcast of a concert by the Los Angeles Philharmonic with music director Gustavo Dudamel on the podium — the first subscription program of the 10th anniversary season at Disney Hall. The concert begins at 8 p.m. PT, 11 p.m. ET. We hope you will join us to share your comments and talk with friends in the chat room on this page and at KUSC.org.

The program centers on a LA Phil commission surrounded by two classics. One of the Philharmonic's favorite collaborators, Yefim Bronfman, will be on hand for Tchaikovsky's barn-burning First Piano Concerto, and the concert kicks off with something of a Schubert rarity — the delicately beautiful Symphony No. 4.

The centerpiece is a new percussion concerto, Shing Kham, left unfinished by the inventive, deeply thoughtful American composer Peter Lieberson, many of whose works were inspired by his Tibetan Buddhist faith. Lieberson was working on the piece at the time of his death in Tel Aviv in 2011. One is tempted to find poignancy and sadness in a final work, but this mini-concerto, completed by Oliver Knussen and Dejan Badnjar, bears a tempo marking that reads "mercurial and feisty, with energy" — a fair description of the artist for whom the piece was written, the extraordinary Portuguese percussionist Pedro Carneiro, who will be the soloist Saturday night.

The concerto is a fitting gift for the anniversary of what became, almost instantly, one of America's greatest concert halls (and undoubtedly the one used most frequently as a backdrop for car ads). In the first few weeks after Walt Disney Concert Hall opened, New Yorker critic Alex Ross described the venue not only in terms of its prize-worthy architecture, but also as "a sensational place to hear music and an enchanting place to spend an evening. In richness of sound, it has few rivals on the international scene, and in terms of visual drama it may have no rival at all."

And then there are the untold thousands of people who have fallen in love with the classical repertoire because of the uniquely vibrant and thrilling experience of attending concerts in Disney Hall. And isn't that the emotional experience we're all seeking? As Lieberson himself once said, "If you investigate what a piece of music is made of, you find nothing more than bits of sound that have no inherent meaning whatsoever. Somehow, notes have been endowed with such passion that they magnetize further notes until, magically, a world is born that makes us cry and laugh."

Gail Eichenthal, who will host this webcast, is Executive Producer of KUSC, its sister station KDFC and the LA Philharmonic broadcasts.

(Gustavo Dudamel is an exclusive recording artist to Deutsche Gramophone.)