Accessibility links
National Parks Close As Other Public Lands Stay Open From Acadia in Maine to Zion in Utah to the North Cascades in Washington, America's 401 national park areas have gates blocking entrance roads. National forest and Bureau of Land Management lands would nearly be impossible to close because there are so many access points. 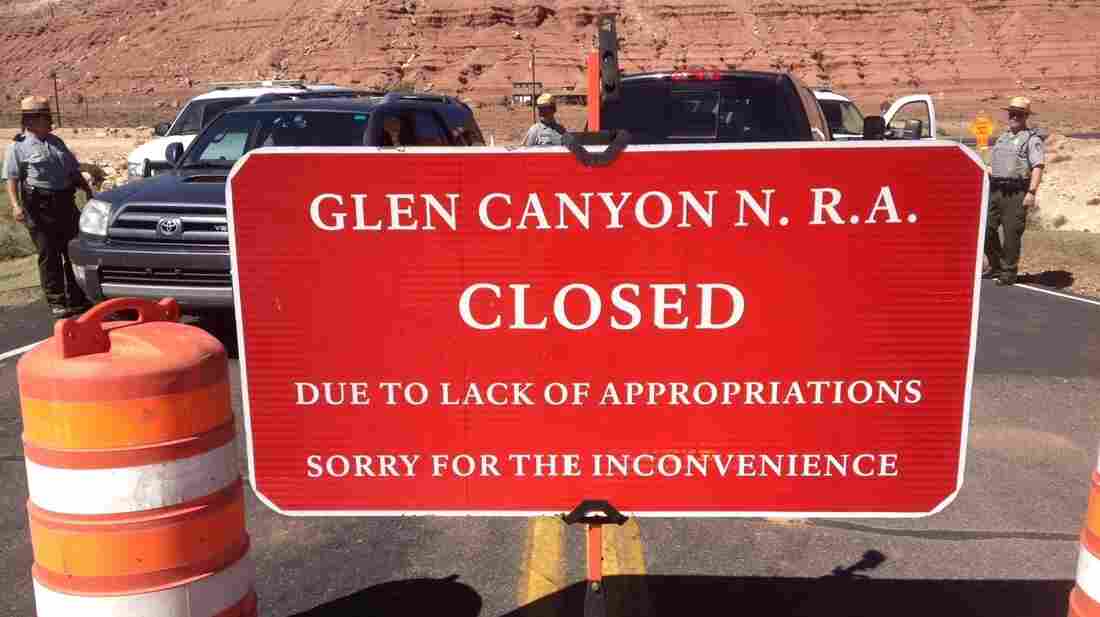 The road to Lee's Ferry, Ariz., is blocked by barricades and national park rangers. Lee's Ferry is the launching point for river trips down the Colorado River through Grand Canyon National Park. Scott Lee/NPR hide caption 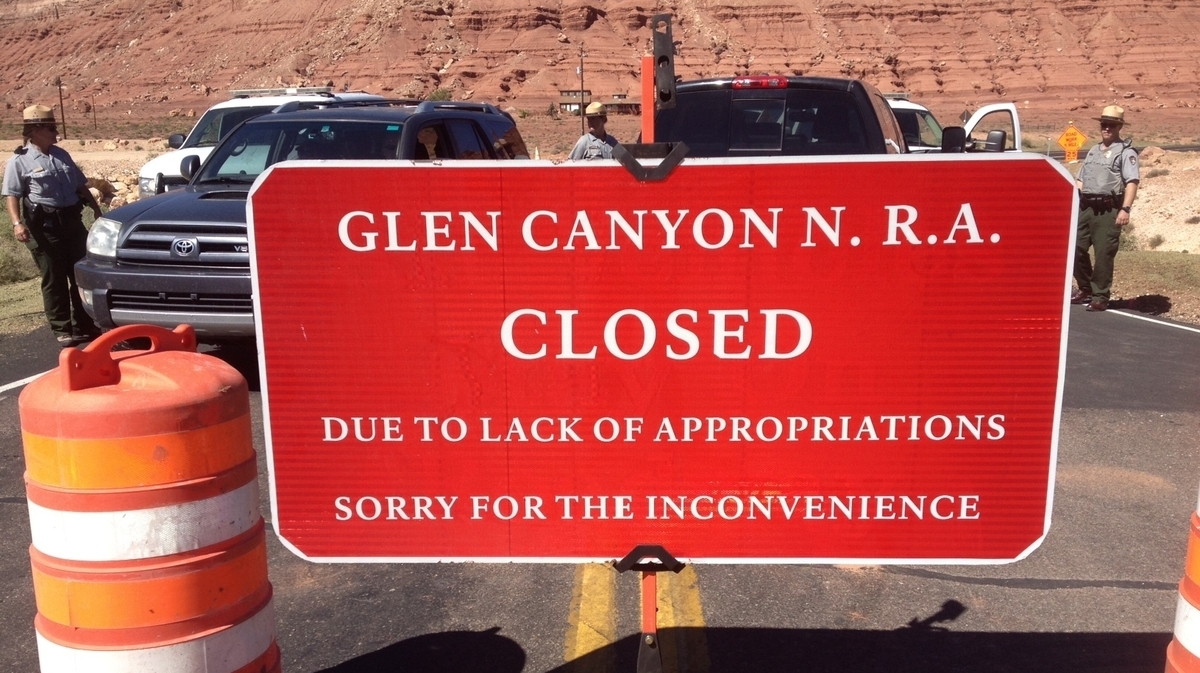 The road to Lee's Ferry, Ariz., is blocked by barricades and national park rangers. Lee's Ferry is the launching point for river trips down the Colorado River through Grand Canyon National Park.

From Acadia in Maine to Zion in Utah to the North Cascades in Washington, America's 401 national park areas have gates blocking entrance roads.

The last remaining campers and hotel guests in the parks must leave Thursday, and park rangers will patrol to keep others out.

The national parks "belong to the American people, and the American people should have the right to come in," says National Park Service Director Jonathan Jarvis. "But the only way I can protect these places during this period is to shut them down."

Jarvis has furloughed 21,000 park rangers, technicians and other employees given Congress' failure to enact a fiscal year 2014 federal budget. The result is delayed weddings, vacations and adventures planned for years.

"In 1995, I applied for a permit to float the Grand Canyon," says contractor Peter Wisniewski of Troy, Idaho, who spoke from a makeshift camp at blocked national park gates near Lee's Ferry, Ariz.

Eighteen years later, Wisniewski has his private Grand Canyon permit, $16,000 worth of rented rafts, food and gear, and 15 friends maintaining a vigil with him at the national park barricade.

"I think the parks being closed during this shutdown [is] silly," Wisniewski complains. "They're playing politics with my one vacation that I've been waiting for for 18 years."

Wisniewski points to the national forests outside the Grand Canyon and elsewhere that are largely open for recreation during the shutdown. Campgrounds and other developed facilities are closed, but hikers, backpackers, hunters, boaters and climbers are able to drive forest roads and get into the places they play.

The same is true for the 245 million acres of federal land managed by the Bureau of Land Management.

But at national parks, national monuments, national recreation areas, national historic sites and other Park Service areas, no entry is permitted during the shutdown.

"The park is closed, and we're enforcing the boundaries," says Aly Batrus, chief of interpretation at Zion National Park in Utah. "You can get a ticket just for being in the park recreating when you're not supposed to be."

Trespassing in a national park carries a maximum fine of $500 and up to six months in jail, according to the Criminal Resource Manual issued to U.S. attorneys.

At Zion, Batrus worries about the 10,000 American and foreign tourists in the park this time of year.

"Allowing 10,000 people to come in and do whatever they want in the park ... would really be risking the resources" and the safety of visitors.

Many may not appreciate the dangers that some activities present in the park, such as the risk of flash floods in Zion's narrow and popular canyons.

"Without a budget we're not able to explain to people some of the dangers of going into certain areas so you don't have the safety messages," Batrus asserts.

Backcountry camping and risky canyon hikes in Zion require permits and safety briefings that are not available during the shutdown.

Zion and other parks include state highways that will remain open during the shutdown, but visitors are not permitted to stop and venture into the parks.

Jarvis says national parks are more "tightly controlled" than other public lands and have "very specific legal purposes that distinguishes them from the open lands of the BLM and Forest Service."

That's a reference to the federal law that established the National Park Service in 1916. It requires the agency to "conserve the scenery and the natural and historic objects and the wild life therein and to provide for the enjoyment of the same."

This preservation and protection role extends beyond the mandates for other public lands, which permit hunting, oil and gas exploration, logging, mining and other development, as well as recreation and some preservation.

Jarvis also describes national park areas as having "limited access points, gates and entrance stations" — with rangers available to "inform visitors what they can and cannot do."

National forest and BLM lands, he says, "would nearly be impossible to close because there are so many access points. Secondly, those lands are open to a wide range of public activities."

The national parks "are irreplaceable assets and they don't manage themselves."

The mandate to "provide for the enjoyment" of parks means that visitors are accommodated with paved roads, lodges, campgrounds, water and sewage systems, law enforcement, search and rescue teams and firefighters.

"We have a skeletal staff," says Batrus. "We do not have the ability that we normally do" to support visitation and rescue people who get in trouble.

Wisniewski and his friends plan to camp out a few more days, hoping for good news from Washington and the opening of Grand Canyon National Park and the Colorado River.

"Maybe in 18 years I'll get another chance," he says, if the news he wants doesn't come.