Accessibility links
'Breaking Bad' Writers: 'This Is It; There's No More' The AMC show about a high school chemistry teacher turned meth dealer ended its fifth and final season on Sunday. Writers Peter Gould and Thomas Schnauz say there was "absolute sadness" in the writers' room as they put the last plot points into place. 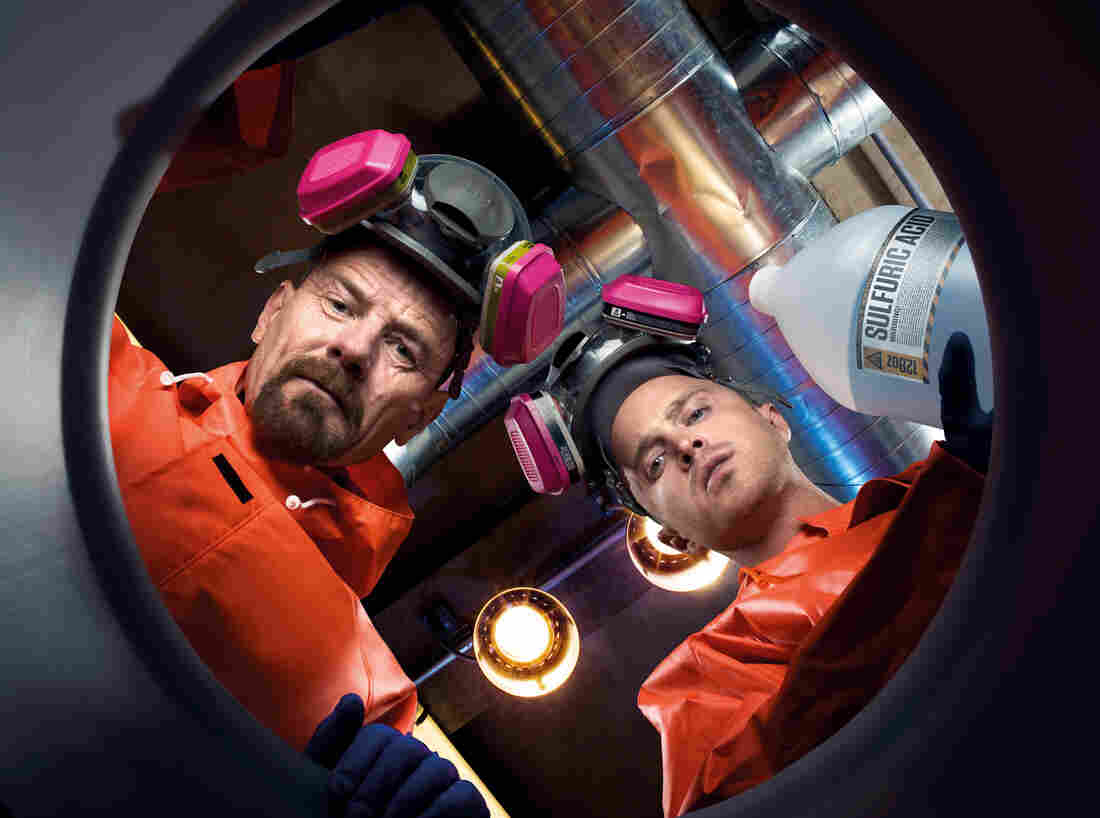 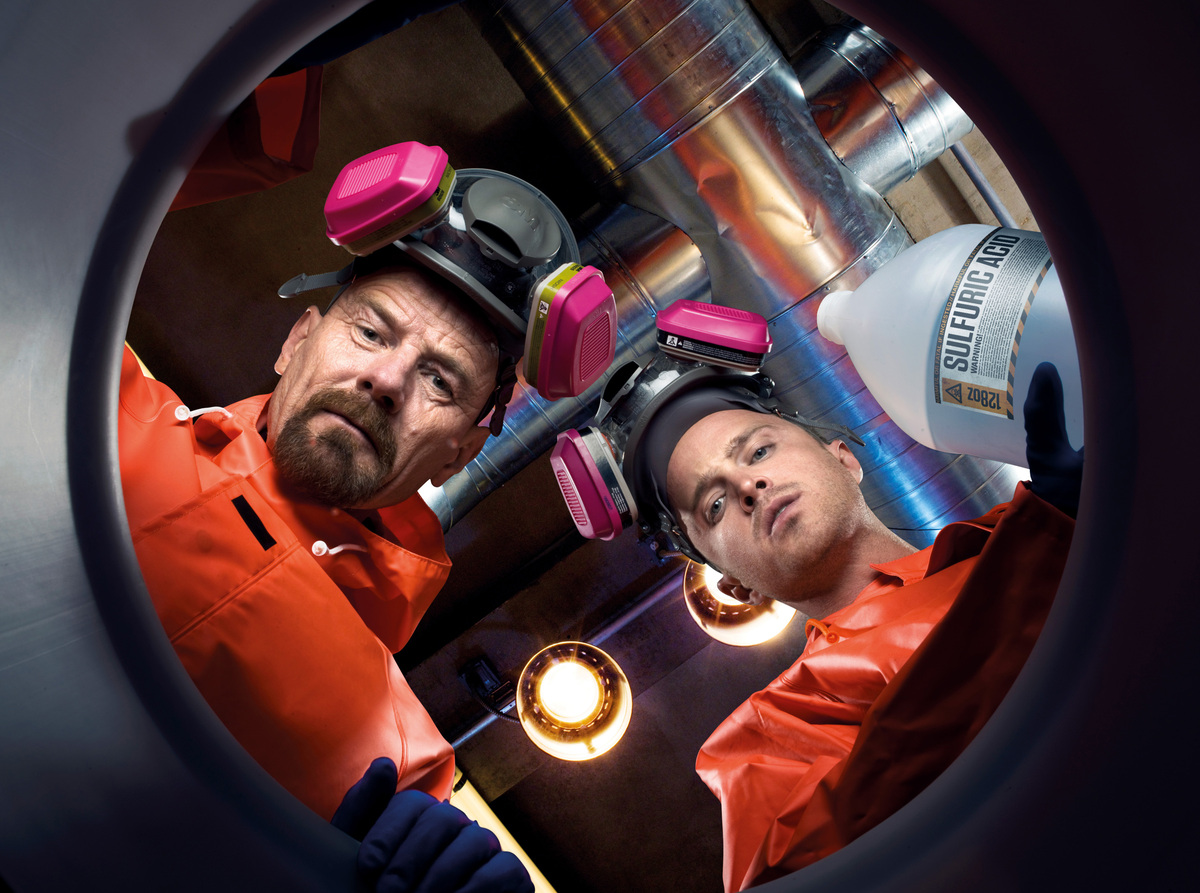 Before you read any farther or click the audio above, we have two words for you: Spoiler Alert. Also, a warning that if you have never seen Breaking Bad, we may touch on some plot points that will be hard to understand without context.

Sunday nights are going to be a lot less interesting without Breaking Bad, which ended its fifth and final season on Sunday. The AMC series began in 2008 with high school chemistry teacher Walter White being diagnosed with terminal lung cancer. He starts cooking meth to have money to leave behind for his family. With every episode, Walt becomes more devious and criminal, lying to everyone including his family.

Peter Gould and Thomas Schnauz, two of the show's writers — who also served as directors and producers — join Fresh Air's Terry Gross to answer some questions about the plot — and help ease the pain of saying goodbye to the series. Gould worked on the show from the start; Schnauz entered the writers' room in Season 3.

PG: It's interesting in a way, because we had talked over and over again over the years about: When is Walt going to see himself the way we see him? When is he going to have a revelation of what he's done and who he really is? Sometimes there'd be a big episode and he'd let Jane die, or we'd play with the idea of having him start to see himself, and it never felt right. We came to the realization that once he really sees himself, once he has a full idea of who he is and what he's done, the show's over.

On choosing an ending — and whether they considered redemption for Walt

TS: We talked about every possible ending, I think. ... I would've really enjoyed [it] if Walt was the last man standing, but it just felt right for him to go out in the end like he did.

PG: It's interesting. I don't really see him redeemed. I think just the fact that he sort of accepts what he's done and who he is — that's not redemption to me. I think ultimately, we talked about the morality of the show a lot while we were working on it, and to me, the actions he has taken are beyond redemption, so there might be some enlightening or understanding that he has, but I would distinguish between self-understanding and any kind of redemption.

TS: The pizza on the roof was unforgivable. [In Season 3, Walt tosses a pizza onto a roof.]

On writing the finale

More On The Breaking Bad Finale

TS: Like every episode, we all sit together in a room in Burbank and we talk about every single beat and we write them down on index cards and pin them to a board and figure out what each episode is going to be. It was that same way for the final episode except for the absolute sadness after we were done, that we were like, "This is it; there's no more." So I remember us pinning that final card to the board ... and it was over.

On how they fill in the details in the script

PG: We say we talk everything out, [but] a lot of the time there are blank spaces or there are parts where there's a lot of improvisation. [Executive Producer] Vince [Gilligan] has a phrase that he'll use, "Feel your way through it." And sometimes, especially when there's something really dramatic or there's a long run of discussion we'll have maybe a key phrase, or a key idea, or key turn for the scene but not all the details about what happens or all of the visuals. It's a great way to work because what happens is, you have what really is a rock-solid structure because we spend a lot of time making sure that each scene has a reason for being. But then, after that, you get to kind of ride it and you get to do a little bit of jazz while you're writing it and really try to bring something of yourself to it, and try to bring the emotion to it.

On writing the trademark phrases of the show

PG: I'm always thinking, "Is this something that the character can say?" and "Does it sound good enough to be on Breaking Bad?" That was usually my concern.

TS: Not until I see it on the air sometimes do I realize that, "Oh, wait a minute. That sounds like something that's going to catch on and people are going to quote back." But I've never written a line and thought, "Oh, this is great; people are going to repeat this and put it on posters."

PG: The things that people catch on to are kind of unpredictable to us. I would've never expected the pizza on the roof would've been something that we'd still be talking about two seasons later.

TS: When we're talking about it in the writers' room and just thinking about the audience experiencing what they're watching, you want to be in Walt's head. And if Walt is behind the story, it just feels unsatisfying. You just want your main character to be caught up with everything that the audience knows. ...

PG: This was dubbed "Tom's Law" in the writers' room. And I think there are many exceptions to Tom's Law because I think it's fun to have your character driving along in his car and we know there's a bomb in his trunk and he doesn't, but sometimes it's frustrating for the audience to watch the characters go off with partial information.

TS: He's totally screwing up Tom's Law. Sometimes there's a need to show a character ... being given a specific piece of information. There's always this need to have, "Oh, we need to have Skyler tell Walt some plot point so that everybody in the audience knows that Walt knows it." Well, my feeling for a lot of it was, we don't need to see that, just let it go, because if the audience knows it, a lot of times you're going to assume the main character knows it. It's getting rid of a lot of shoe leather that's boring because you don't need to fill in those gaps for the audience; the audience gets it.