Accessibility links
Remembering Tom Clancy, 'Faulkner In A Flak Jacket' Critic Alan Cheuse remembers Tom Clancy, hailed by many as the father of the military techno-thriller. Beginning in 1984 with The Hunt for Red October, Cheuse says Clancy created a "hero for our time" in CIA agent turned President Jack Ryan and wrote "dozens of books that seem more real than reality itself." 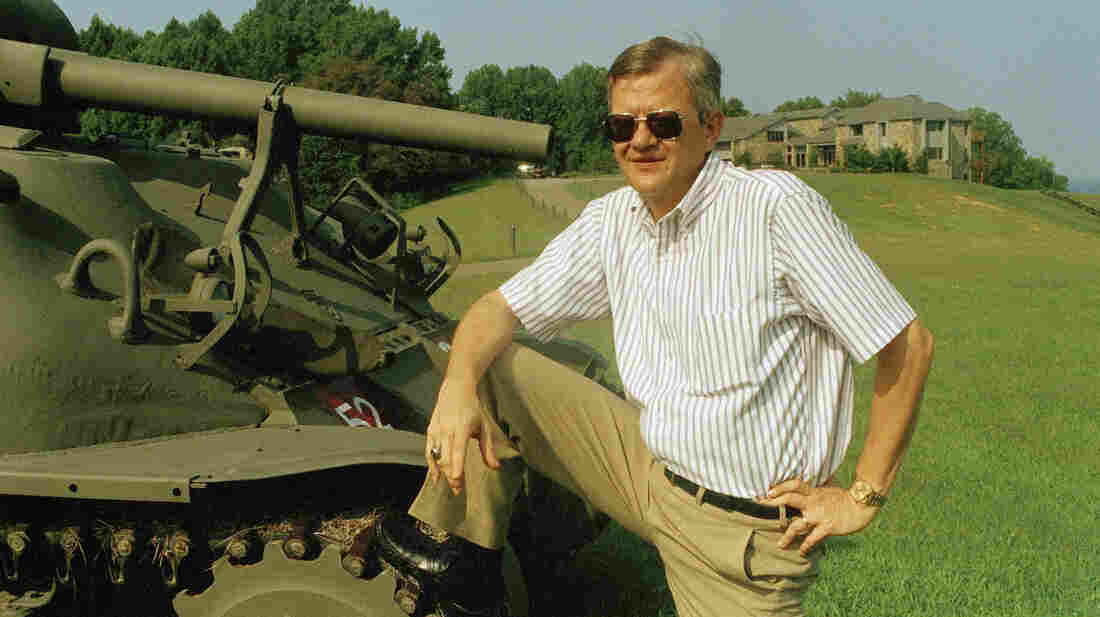 Tom Clancy poses next to a tank in his Maryland backyard. Though he never served in the military, his books were renowned for their detail. AP hide caption 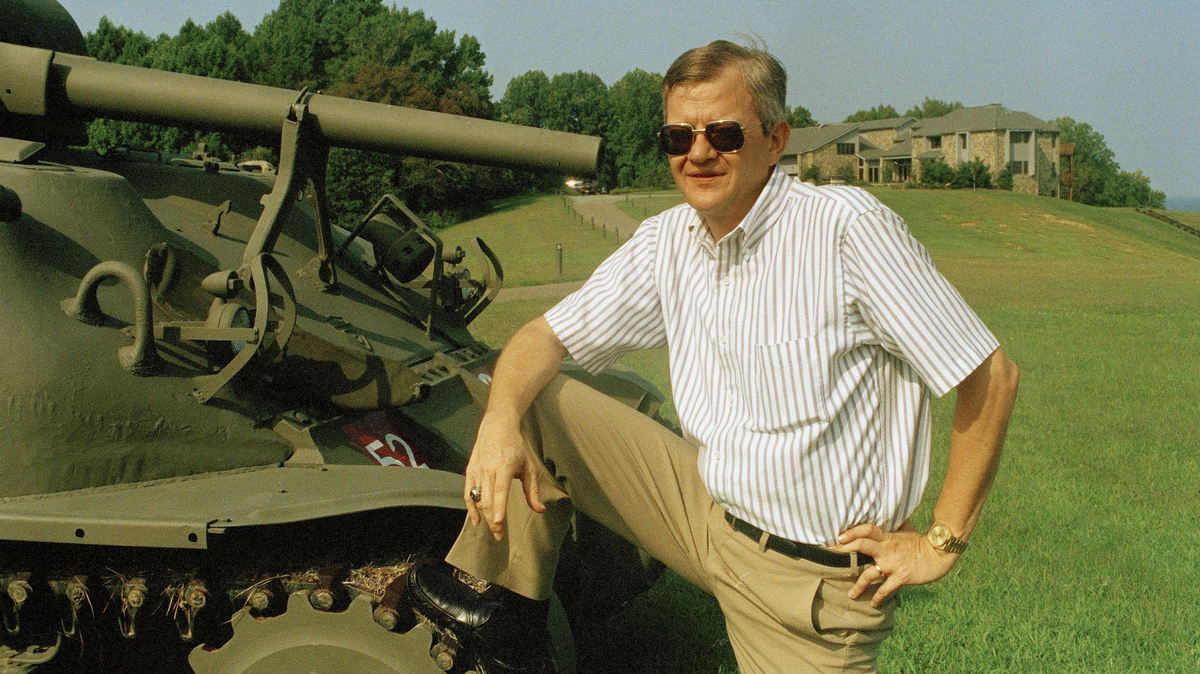 Tom Clancy poses next to a tank in his Maryland backyard. Though he never served in the military, his books were renowned for their detail.

The Army rejected him because of his bad eyes — he was nearsighted — but Tom Clancy, who went into the family insurance business instead of the military, turned out to have the greatest vision of modern warfare of any writer of our time. His research into military history and technology led him to create a new form of thriller, and a hero for our time, a man named Jack Ryan whose talents as a spy and technowarrior put a name and a face to the people who battled Russians, Pakistanis, Irish nationalists and Islamists along a constantly shifting front line.

Like other contemporary best-selling entertainers, such as Stephen King, say, or James Michener, Clancy was not a great stylist. But he had a great talent for creating dramatic scenes that kept us bound to the page, reading our way through the most catastrophic events. Fortunately for us, the nuclear bombing of the Baltimore football stadium, a plot on the part of a rogue Pakistani general to destroy Moscow, and a plan by a splinter group of the IRA to kidnap Americans remain fictional. But Clancy's talent for scene-making, his gift for research, and his apparent multitude of confidential contacts with the men and women who actually lived the military and intelligence life made it possible for him to create dozens of books that seem more real than reality itself.

The best of these, The Hunt for Red October, Patriot Games and others in the Jack Ryan series make up a saga so engrossing and so hypnotic they read like movies on the page. The action scenes evolve beautifully, as visual as anything in the movies, with the added enticement of crisp, accurate and hard-driving prose and meticulous research. As in the opening of the 1984 novel that carried him first into the public eye: "Captain First Rank Marko Ramius of the Soviet Navy was dressed for the Arctic conditions normal to the Northern Fleet submarine base at Polyarnyy. Five layers of wool and oilskin enclosed him. A dirty harbor tug pushed his submarine's bow around to the north, facing down the channel. The dock that held his Red October for two interminable months was now a water-filled concrete box, one of the many specially built to shelter strategic missile submarines."

And of course, apart from his powers of narrative, Clancy had at his command all the workings of military gadgetry, from robotics and hidden cameras to signal lights, weaponry, aircraft and nuclear payloads.

So many readers hungered for a constant stream of Clancy fiction that he ended up establishing a studio of writers and researchers to write books with him — and not just books, but a series of best-selling video games based on his fiction, something not many other writers can boast of. And in his wake appeared a growing list of Clancy imitators and Clancy clones, urged on by publishers hoping to cash in on the immense popularity of his innovation in the world of genre fiction, the military techno-thriller. But even when working with co-writers, he still produced books that had no peers.

His latest novel, Command Authority (co-written with Mark Greaney), comes out in time for Christmas. A lot of us will want it in our gift stockings. And I wouldn't be surprised if some loyal Clancy readers started a movement to have him buried in Arlington Cemetery, this fallen father of the techno-thriller, Faulkner in a flak jacket.