Accessibility links
2 By 2 and 2x4s: The Building Of Noah's Arks There's been a near boom of Noah's arks around the world. The latest is in Miami, where a group wants to create a Noah's ark theme park with rides and gardens. The man behind a 450-foot long ark in the Netherlands says his goal is to spread his faith, but he thinks the appeal of the Noah story these days is obvious: climate change. 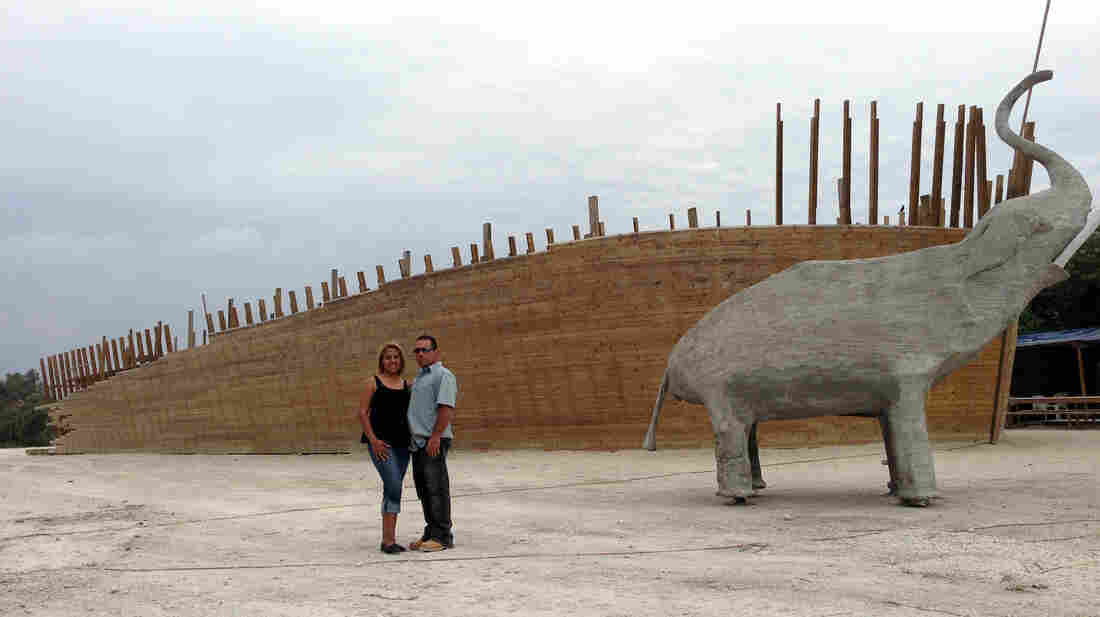 Carolina and Reniel Peralta of the Hidden Ark in March, before the county government made them tear down the ark. The ark was deconstructed in June, but the concrete elephant still stands. Kenny Malone/WLRN hide caption 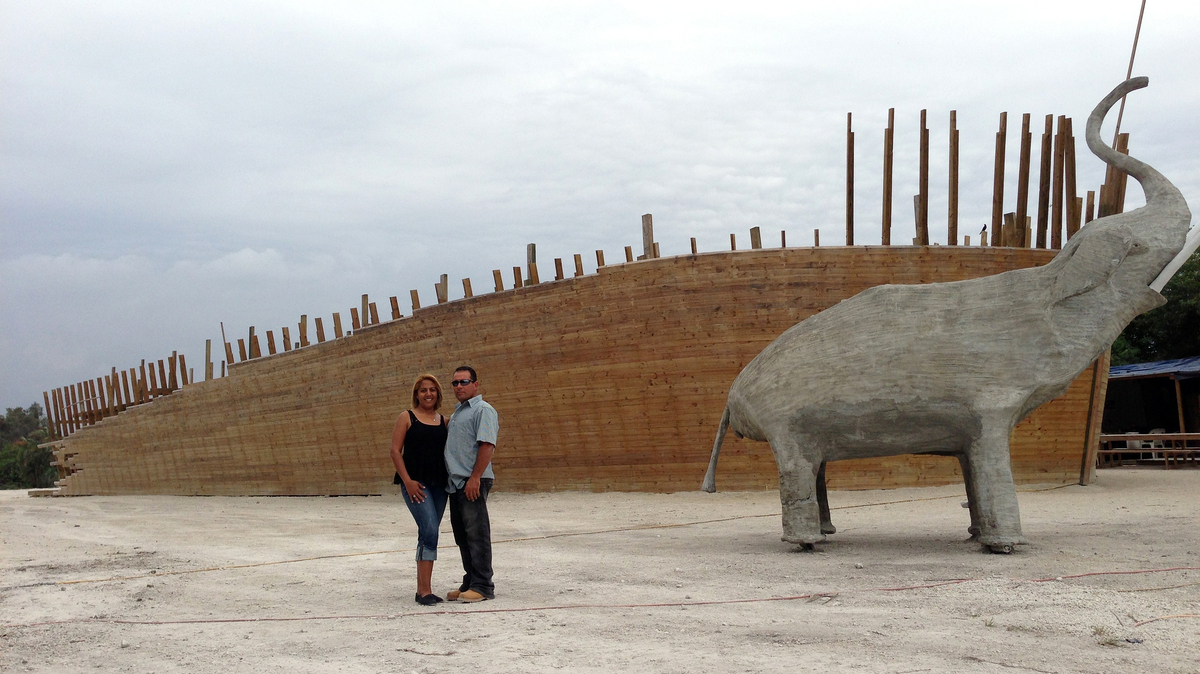 Carolina and Reniel Peralta of the Hidden Ark in March, before the county government made them tear down the ark. The ark was deconstructed in June, but the concrete elephant still stands.

There are just about 30 days — and 30 nights — left in South Florida's rainy season. That will not deter a monumental building task being attempted by a group of people near Miami.

The Hidden Ark project was originally planned for a 5-acre spot just outside Hialeah, Fla., not far from the Everglades. In the spring, builders worked to create a one-tenth of a full-scale Noah's ark — imagine a 150-foot-long bathtub made of wood.

Carolina Peralta of Hidden Ark envisioned a theme park. "This is going to be our Disney in Miami," Peralta said.

The original vision of the park was as one part zoo, one part biblical experience, and cost about $1.5 million.

"Yeah, it sounds crazy, but every single person that comes over here and sees it, they say, 'Oh my God this is amazing,' " Peralta says.

There are, of course, challenges when using the Book of Genesis like a set of Ikea instructions. In the Bible, "the Lord said: Make thee an ark of gopher wood."

And then there are the divine dimensions — translated in the King James Bible to be 300x50x30 "cubits."

"The cubit in Hebrew is the mother of the arm. Basically, that's from the middle finger tip to the tip of the elbow," says Mike Zovath with the Creation Museum in Kentucky. The museum has raised more than half the money needed for its $24.5 million Ark Encounter project.

The Creation Museum's mission is to show the feasibility of biblical stories. So with the Ark Encounter, they're also setting out to show what day-to-day life would have been like for Noah.

"Not only are we thinking through the different kinds of animals represented onboard and how you deal with 12 million tons of waste every day," Zovath says.

How exactly would Noah have accomplished that? "Very, very carefully I think," Zovath says. "I'm not sure how they did that."

The arks in Kentucky and Florida are just part of a larger ark boom in the past few years.

There is Lu's ark in China — a relatively small boat reportedly built to survive the 2012 Mayan apocalypse. Perhaps most notably there was Johan Huibers. Two years ago, Huibers completed a 450-foot-long, fully functional ark in the Netherlands. A hundred thousand people have come to see Huibers' ark. His goal is to spread his faith, but he thinks the appeal of the Noah story these days is obvious. 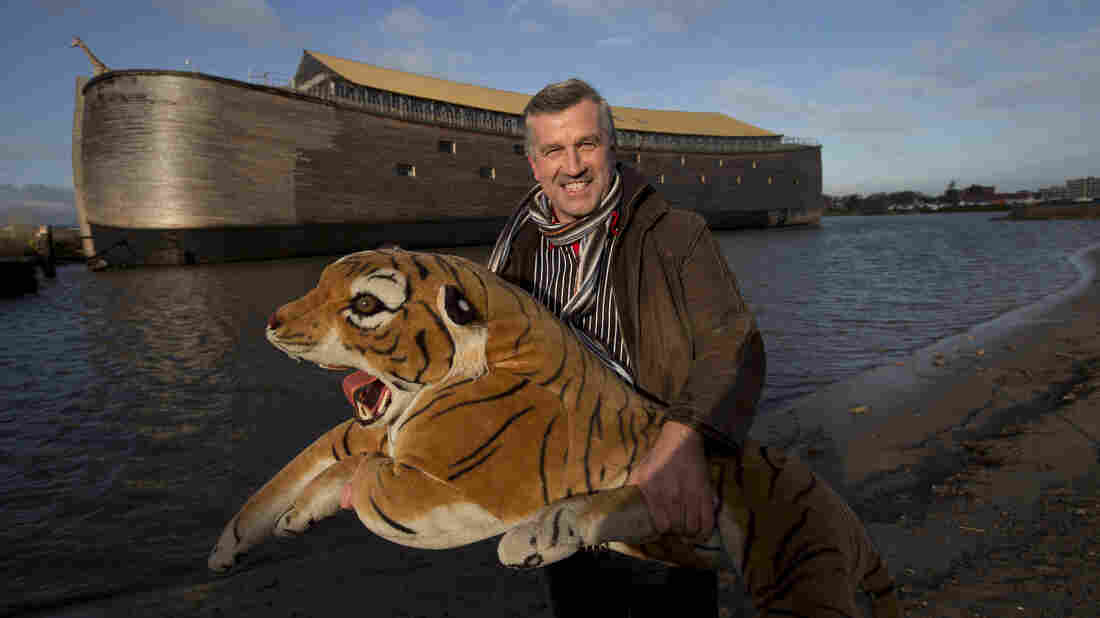 Johan Huibers poses with a stuffed tiger in front of the full-scale replica of Noah's Ark he built in the Netherlands. Peter Dejong/AP hide caption 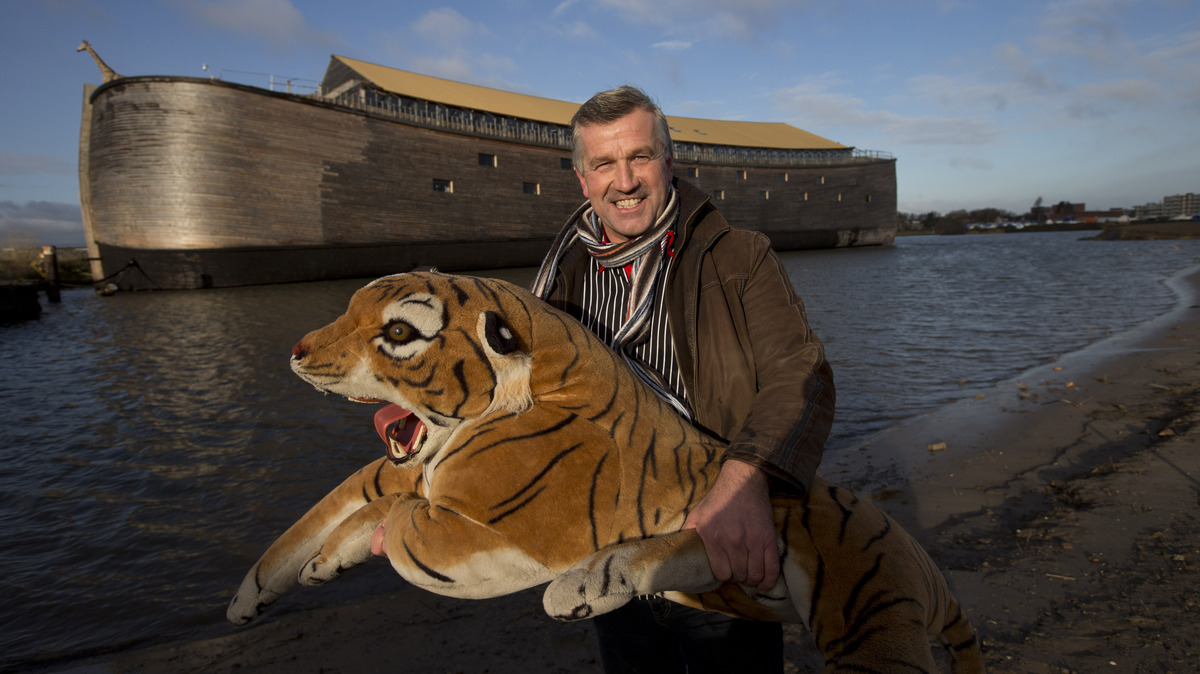 Johan Huibers poses with a stuffed tiger in front of the full-scale replica of Noah's Ark he built in the Netherlands.

"I think because the climate is changing. When you see Japan, the tsunami. When you see it in Indonesia. You see the water came in New Orleans. The coming years, the change will be bigger and bigger," Huibers says.

The Noah's ark story has become a kind of a Rorschach inkblot test for climate change. Some, like Huibers, see the story as a cautionary tale. But in 2009 an Illinois congressman cited the promise God made to Noah to never again flood the earth as a reason we shouldn't worry too much about climate change.

Paul Harvey, an expert in American religious history at the University of Colorado, Colorado Springs, says the Noah story, regardless of God's promise, is resonating on an apocalyptic level.

"Because even if you don't think there's going to be a flood, evangelicals think there is going to be some kind of catastrophe at the end of the world as part of the Book of Revelations. And so they're still responding to it even if they may deny exactly the climate part of it," Harvey says.

Back on the 5-acre lot just outside Miami, climate change is the least of the Hidden Ark's problems. In April, there was some bad news: The group didn't have the proper permits for its ark and the county said to tear it down.

But there is an upside. The developers have bigger plans now, too big for the 5-acre lot. They want to add modern rides, Babylonian gardens and a water park themed after Niagara Falls.

And if you thought building the ark was a task of biblical proportions, consider the fundraising. The new Noah's Ark Park will cost an estimated $2 billion.