Accessibility links
Pioneering 'Masters Of Sex' Brought Science To The Bedroom William Masters and Virginia Johnson became famous in the 1960s for their research into the physiology of human sexuality. In Masters of Sex, biographer Thomas Maier explores the duo's research methods, which for years remained shrouded in secrecy. Originally broadcast July 30, 2013. 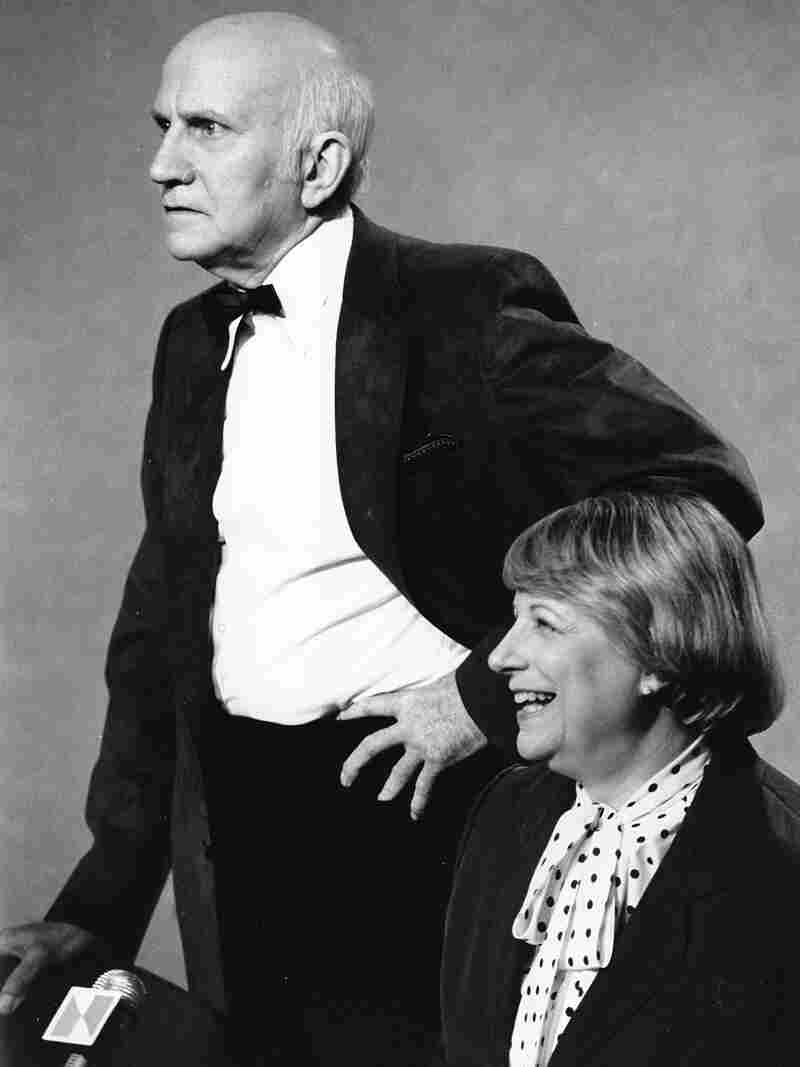 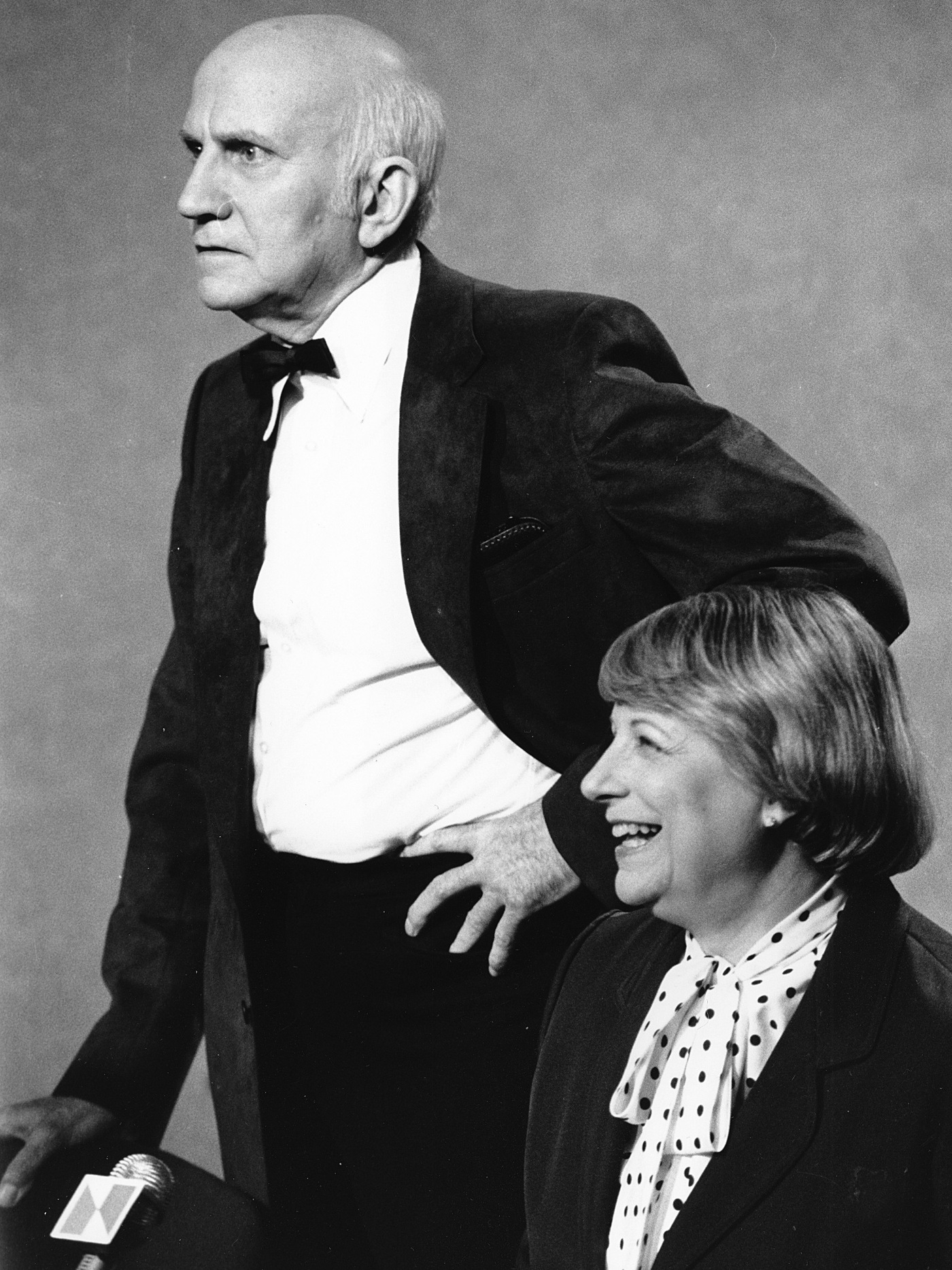 William Masters originally hired Virginia Johnson, then a divorced mother of two, to help him conduct research interviews. They married in 1971.

This interview was originally broadcast on July 30, 2013.

William Masters and Virginia Johnson became famous in the 1960s for their groundbreaking and controversial research into the physiology of human sexuality. Instead of just asking people about their sex lives, Masters and Johnson actually observed volunteers engaging in self-stimulation and sexual intercourse. Changes throughout their bodies during arousal were measured with medical equipment.

A new Showtime series premiering in September tells their story. It's called Masters of Sex, and it's based on the book by Thomas Maier, who is also a consultant for the series. Until Maier's book, Masters and Johnson's research techniques remained shrouded in secrecy. Maier was able to uncover information through interviews with their friends, family and former colleagues, as well as extensive interviews with Johnson, who died on July 24 at the age of 88.

Masters of Sex was first published in 2009, but a new paperback edition of the book has just come out. Maier is also the author of books about the Kennedys and the famous pediatrician Benjamin Spock. He joins Fresh Air's Terry Gross to discuss Masters and Johnson's discovery of multiple and fake orgasms, as well as Masters' use of prostitutes and sex surrogates.

On how Masters and Johnson medicalized sex

"Before Masters and Johnson came along, the realm of sex — the subject of sex — was usually something you talked to your priest, your rabbi or your minister [about], or you found yourself lying on a couch, talking about your feelings, about your mother, to a Freudian-trained analyst. Bear in mind, when [Masters and Johnson] came along in the mid '50s, it was the height of Freud's impact on America. ... They thought the ... questions that people were posing and the answers that people were looking for were best addressed to a doctor who was well-trained in the subject of sex.

"Masters wanted to understand exactly how the body worked so that they could come up with therapies to fix the various different problems that married couples would have in the bedroom. So they used a variety of different instruments. One of the instruments that they used was to trace the breathing and the heart rates and such. It was also used to internally observe sexual response by women, and that had a nickname called 'Ulysses.' But it was something that was all part of their clinical observation of how both males and females responded during sex."

On the mystery of how humans respond during sex

"It was kind of the OB-GYN's holy grail in a sense. In other words, they were all aware that there had never been a study of human beings. They had studied rabbits; they had studied apes. And in fact, that's kind of how Bill Masters, studying anatomy both in Rochester and later at Johns Hopkins, became aware that this was something that had never been done. He traveled in the circle of doctors that were looking to win the Nobel Prize for ... identifying estrogen and progesterone. And he felt, though, that this ... was the grand prize, that this was something that would win a Nobel Prize if he could fully document over a long period of time exactly how the human responded during the central act of procreation."

The Life and Times of William Masters and Virginia Johnson, the Couple Who Taught America How to Love

Title
Masters of Sex
Subtitle
The Life and Times of William Masters and Virginia Johnson, the Couple Who Taught America How to Love
Author
Thomas Maier

"Their major, first book dealt with the power of female sexuality. Masters and Johnson really underlined the power of female sexuality, and in their long-term study what they showed was that women had the capacity for multiple orgasms in a way that men would go into what they called 'a refractory period' after having the initial sexual orgasm. Women were capable of multiple orgasms, and the second and the third was more intense than the first, and ... they didn't necessarily need to have a man to have an orgasm. And this was something that was done with about 380 women, almost an equal number of men, and they recorded something like 10,000 orgasms over a decade-long study that formulated their major book, Human Sexual Response, that came out in 1966."

On using prostitutes for early research

"[They were] really the only female subjects that he could get to study. [Masters] was going at it alone, initially. Masters had an OB-GYN practice in St. Louis, where he was in many ways the best doctor in St. Louis. He had a lot of rich clients. He was very aware that the experience[s] of prostitutes were different than everyday women."

On how he avoided legal trouble when studying prostitutes in brothels

"How in the world ... was he not arrested? One of the things that I found in doing research was I found the police commissioner in St. Louis, a guy named Sam Priest. [Masters] had been the OB-GYN for Mrs. Priest when she delivered her babies. So Sam Priest, the top cop in St. Louis, he loved Dr. Masters, he thought he was the greatest, the way that ... we all venerate doctors who are terrific. So whatever Masters wanted to do in that regard, [Priest] was more than willing to accommodate. ... [He] acted almost as the accomplice with Masters in going to various different brothels in the city and observing prostitutes all in the name of science."

On Masters discovering the fake orgasm

"What happened with Masters was that he was using a number of different prostitutes — and one of the prostitutes was actually a graduate student, I believe — and he would debrief them after observing this, and kind of talk about it. He asked about orgasm, and she said that she often faked orgasm. And he said, 'What do you mean "faking orgasm?" ' And she said ... something to the effect of, 'Buddy, you've got to be kidding.' And she explained that virtually most women at some point in their life, if not every night, will fake orgasm, that it was a common thing. And he seemed like he was struck by lightning, that the light bulb went off on his head. And it was the student ... that said that he should get a female partner, and it was something that he really took to heart, and he realized that he was not going to go anywhere unless he had a female partner."

On the researchers' use of sex surrogates, who are intimate with patients in order to achieve a therapeutic goal

"They always wanted to study how the body worked so that they could fix it. Medicine could deal with the various problems that couples had, individuals had. One of the problems was impotence for men, and they found that sex surrogates could be quite effective with men who were having problems performing. Bill Masters had a certain ... all-American utilitarianism to his view: If it works, it was the job of the doctor to make it happen for the patient. So he believed in sex surrogates. But what happened was that there were some legal consequences that came across there, and I think that Masters and Virginia [Johnson] ... became aware that he could have his medical license even taken away. So the lawsuit was quietly taken care of by their lawyers and they kind of vowed that ... they wouldn't do it again."

More On 'Masters Of Sex'

The Most Shocking Moments Are True In 'Masters Of Sex'

50 Years On, Research On Sex Can Still Be A Lightning Rod

'Masters Of Sex' Get Unmasterful Treatment On Showtime

On their struggle for acceptance in the medical community

"In terms of Masters and Johnson, I think they felt that as long as it was within the realm of medicine and that people were following things here, and keeping an eye on it and it was effective for patients, that it was the appropriate course to pursue. Ultimately, it was too difficult; it was too hot to handle, frankly, politically. It was always [a] problem for them that the subject of sex was something that medicine, they felt, should get involved in, but medicine wasn't really willing to do so."

On the circumstances surrounding Masters and Johnson's marriage

"They got married at the very height of their fame. They were on the cover of Time magazine, this was about 1970. By that point they had become quite world famous. Virginia Johnson made more money, frankly, somewhat of a surprise to her, than she ever imagined.

"She had met a man who had ... provided money for their study about the impact of scents and smell on sexuality. This is the guy who provided the lemon in lemon Pledge and all these various scents. And somehow they found the link between scents and sexuality, that this was well worth funding. It turned out, as much as Masters liked that idea, he didn't like the fact that this fellow — Hank Walter was his name — wound up having an affair with Virginia Johnson, and that eventually Virginia wanted to get married to Walter. When Masters found that out, he finally decided that he was going to end his [first] marriage. The thing that was most important to him was not his family, not even necessarily his relationship with Virginia — it was that work that they were doing, that brand name of Masters and Johnson. And so Masters ended his long marriage, told his kids that he was divorcing their mother, and got married to Virginia."

Read an excerpt of Masters of Sex