Accessibility links
Interview: Erica Jong, Author Of 'Fear Of Flying' Back in 1973, Erica Jong was tired of the silent, seething housewife, so she introduced a new kind of female protagonist: one who loved sex and wasn't ashamed to admit it. Jong joins NPR's Susan Stamberg to talk about hook-ups, Fifty Shades of Gray, and of course, the "zipless f - - - ." 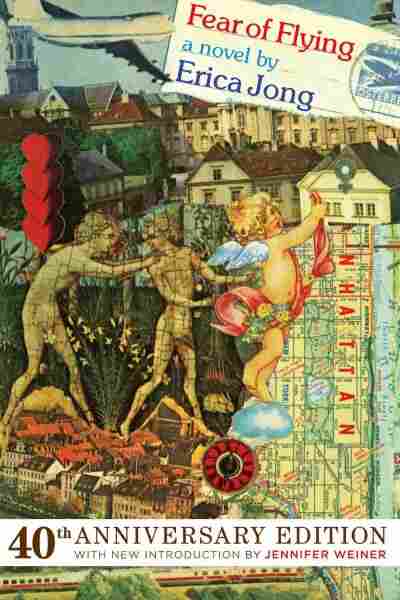 In 1973, Erica Jong was tired of reading about silent, seething housewifes, so she introduced a new kind of female protagonist: a frank young woman who loved sex and wasn't ashamed to admit it. Fear of Flying turns 40 this year, as does its most famous phrase: "the zipless f - - - ." Jong defines it in the novel:

The zipless f - - - was more than a f - - - . It was a platonic ideal. Zipless, because when you came together, zippers fell away like rose petals. Underwear blew off in one breath like dandelion fluff. Tongues intertwined and turned liquid. Your whole soul flowed out through your tongue and into the mouth of your lover.

Jong spoke with NPR's Susan Stamberg about hook-ups, Fifty Shades of Gray, and the shocking revelation that women enjoy sex, too.

On writing about women enjoying sex

It's very strange that it was a revelation, because the population of the world has been growing for centuries. Women do like sex, and they do fantasize about sex.

On what was expected of women in the early 1970s

You were supposed to get married, have children, take care of a husband; and that was why there was an epidemic of mad housewife novels in which a woman woke up and discovered actually her sworn enemy was her cranky husband who had made her into a slavey. And I truly hated those mad housewife novels. Hate, hate, hated them. Because they were blaming men for something that was not literally men's fault. I mean, we were in a terrible predicament as a society, but it was not the fault of individual men or women. We were stuck in certain roles.

In addition to her novels and books of poetry, Erica Jong has written two memoirs and edited an anthology of essays on sex written by women. Michael Childers/Courtesy of Henry Holt and Co. hide caption

In addition to her novels and books of poetry, Erica Jong has written two memoirs and edited an anthology of essays on sex written by women.

On her own experience

I married the man who I lost my virginity with. But I have to say that I grew up in a very hip family. My parents were very sexual, and there was absolutely no question, in the household I grew up in, that sex was fun. My parents were crazy about each other. You know, hippies were not invented in 1969.

When I read these [men's] books, I thought: But where are we? Why are we not writing about our feelings? I thought it was time to claim that territory for women. And I was scared to death writing the book. Scared to death, but also laughing hysterically and having a ball.

On the effect of Fear of Flying on her male readers

In the beginning, they were very threatened. Over the 40 years, I've heard all kinds of things about the book. One man said to me, "Whenever I saw that book on a woman's night table, I knew I was gonna get lucky."

I don't believe that the zipless 'bleep' actually exists. ... It is a beautiful fantasy. But for the most part, when you fall into bed with a total stranger, it's a great disappointment.

I doubt that I would write the story today, of Isadora. I mean, the arc of the book is a picaresque journey — a woman going, leaving her husband and taking off with a very sexy British psychoanalyst, and they're traveling across Europe. They're on an existential journey. And I think that, in my 20s and early 30s, an existential journey appealed to me. It was a way of solving my problems and learning about myself.

I don't have that illusion, or delusion, anymore. First of all, I don't believe that the zipless "bleep" actually exists. I think that, for the most part, we tend to be more sexual with somebody we feel comfortable with. Occasionally you might fall into bed with a total stranger, and it is a beautiful fantasy. But for the most part, when you fall into bed with a total stranger, it's a great disappointment.

On why Fifty Shades of Gray isn't empowering

If you look at Fifty Shades of Gray, it's a very, very retrograde book, because if you're tied up and aroused, what are you really doing? You're giving up all responsibility for your sexuality. So, you cannot be a bad girl, because you're tied up. ... You can be a victim.

I think that [young] women today — particularly in universities and so on — are doing hook-ups. The hook-up is a zipless "bleep." But I don't think that they're getting much joy out of it. If you look at Girls, Lena Dunham's program ... in many ways is very dark — these girls are not getting any pleasure. They're watching the men get pleasure. And so if hook-ups are so wonderful, why are these shows so dark and disappointing?

Read an excerpt of Fear of Flying

Author Erica Jong, on Getting Panned