Accessibility links
Does Capitalism Work? A True/False Quiz In Times Square "Starting a conversation about capitalism is like walking up to a stranger and asking, 'Can I talk to you about Jesus?'" says artist Steve Lambert. The best way to talk about the C-word, he says, is to make it personal. His giant art installation in New York challenges passers-by to weigh in. 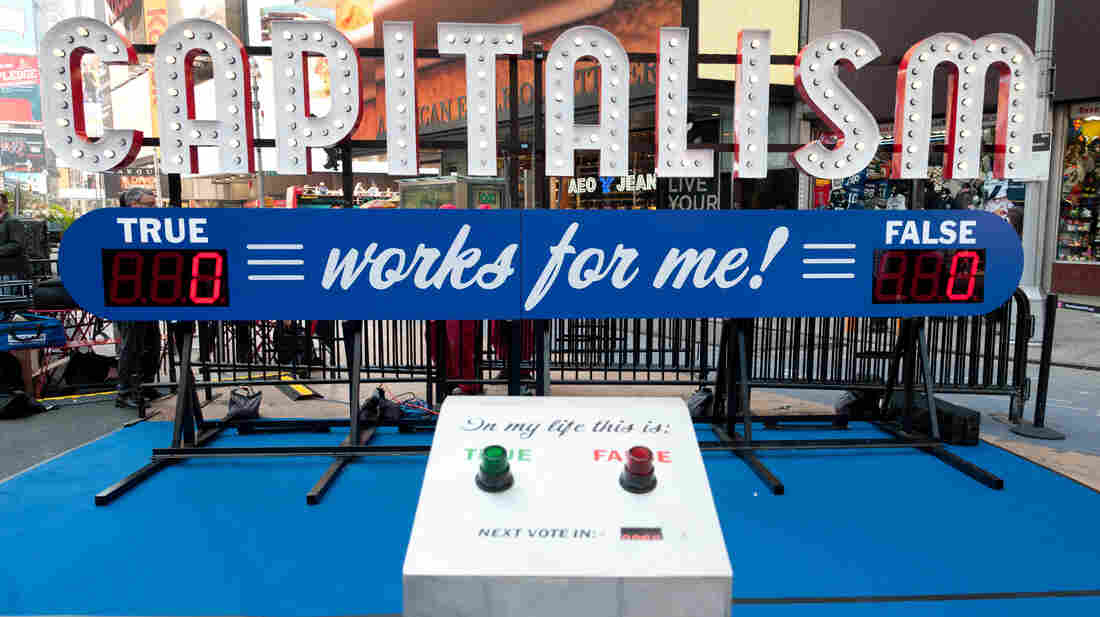 Steve Lambert's art installation asks people to vote in an effort to open up the discussion about capitalism. That word can be a red flag for many, Lambert says. Jake Schlichting/Times Square Arts hide caption 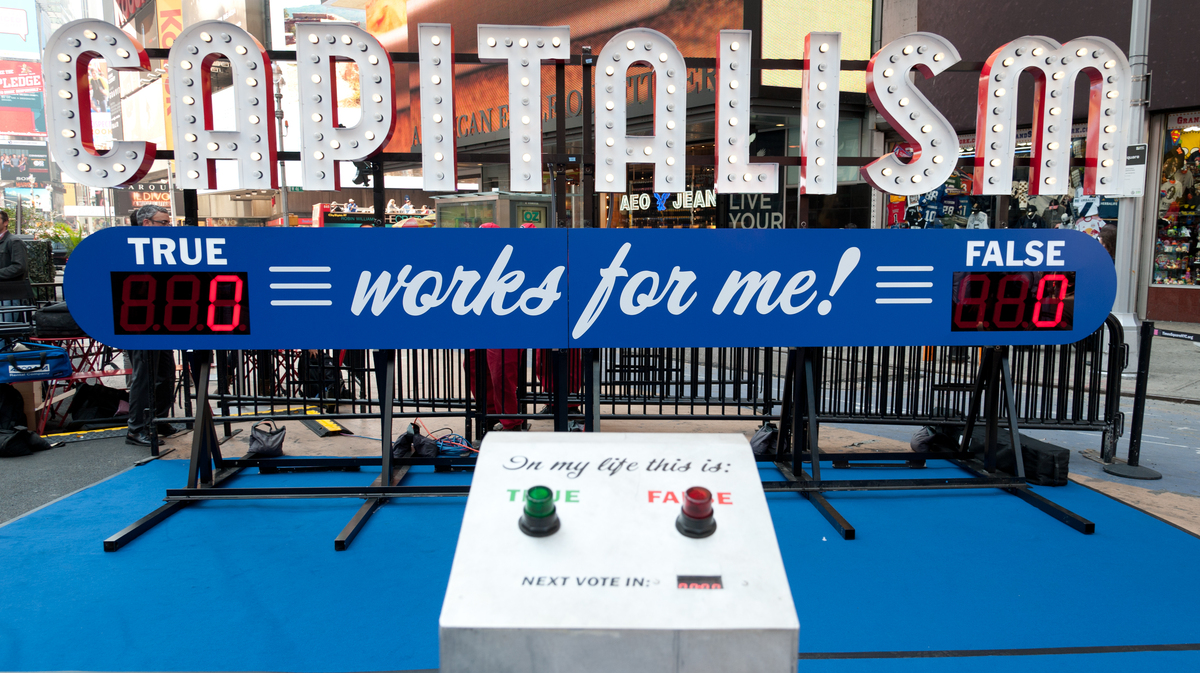 Steve Lambert's art installation asks people to vote in an effort to open up the discussion about capitalism. That word can be a red flag for many, Lambert says.

I'm walking through Times Square, the crossroads of the world. Just when I reach the line for cheap Broadway tickets, I see it: a giant billboard with the word "capitalism" in bright white lights and the words "works for me!" in cursive below. There's a podium and two buttons where you can vote whether the statement is "true" or "false."

Peggy Demitrack, a tourist from Cleveland, is adamant when she pushes the "true" button. She says capitalism works for anyone who strives and educates themselves.

When asked whether she has money for retirement, she adds: "Something! Yes. And you know what? Even if I didn't, if that all collapsed, I'd be down the street working for McDonalds. I would not be sitting home wanting to take something from somebody else."

Steve Lambert, the artist who came up with this idea for "Capitalism Works for Me! (True/False)," has often done pieces about advertising and the media. He was once involved in a satirical hoax in which a fake "special edition" of The New York Times announced the end of the Iraq War in 2008, with more than a million copies printed.

His new economics-themed art installation has been traveling around the country, and it's now in Times Square for a few days.

Lambert says talking about capitalism is almost impossible without sounding tedious. As he said at the Creative Time Summit last year in New York: 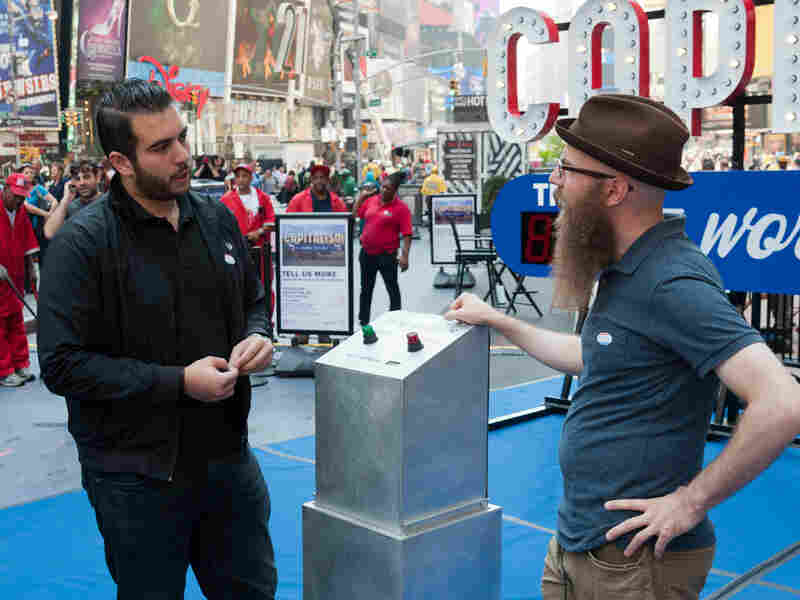 Artist Steve Lambert, right, asks people to vote on whether capitalism is working — for them. The art installation is in Times Square through Oct. 9. Jake Schlichting /Times Square Arts hide caption 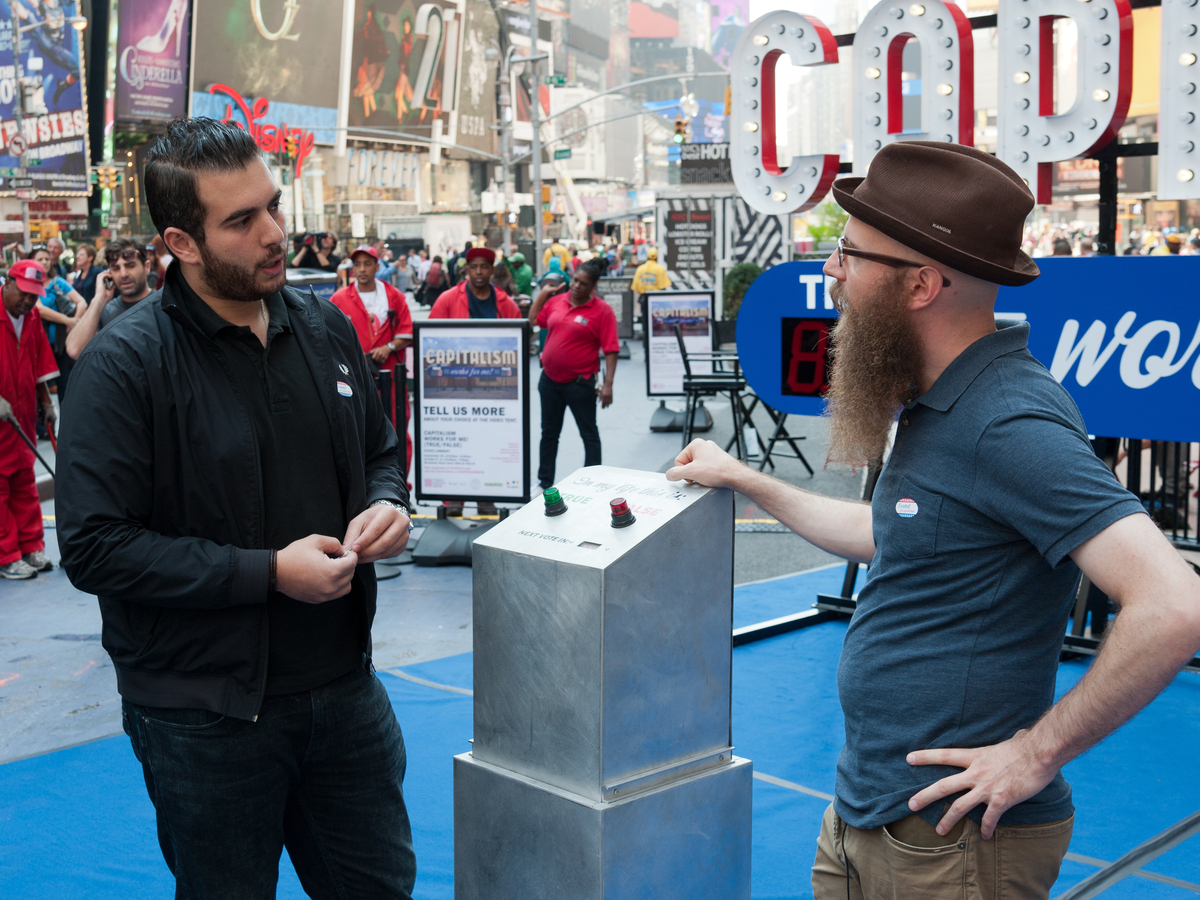 Artist Steve Lambert, right, asks people to vote on whether capitalism is working — for them. The art installation is in Times Square through Oct. 9.

So how do you get people to reflect, and not argue? Lambert's first thought was to make it personal. It's not about whether capitalism works for the U.S., or for the government, or for the world, he says — "it is, capitalism works for me!" He says making an issue personal stops arguments — something, he jokingly says, that he learned from decades of therapy.

Back in Times Square, many of the people I encounter are ambivalent, even embarrassed, to talk about capitalism. Eve Ting, who works in Times Square, says she drinks coffee at Starbucks and buys clothes at Uniqlo. She starts laughing and says, "I feel like this is a confession."

Or take freelance designer Daniel Dunnam. "I work from home, I work my own schedule, I make lots of money, I have insurance," he says. "I have a very charmed existence, and I'm aware of that, so obviously the system is working, right? But then I started thinking about it, and I realized that I've got people in my family, or even just friends, who it's not working for them, and I decided that if it doesn't work for those I love and who I care about, then it doesn't work for me."

Then there are those who can't make up their mind. Laura Wenus walks up to the podium and starts talking to Lambert. Capitalism has benefited her, she says, but "I don't know if I can live with the moral dilemma of having benefited while others have actually suffered from it."

Lambert tells her it's up to her to decide. "Why is this such a tough decision?" she says. "No offense, but it's just a billboard, you know?"

Lambert says his main purpose is to get people to slow down and ponder. He says people always ask him, "What alternative are you proposing?" He always says, "Something better." They ask what that means, and he says, "We don't know yet."

It's at that point, he says, that the conversation begins to open up. It's almost like science fiction: Lambert wants people to go beyond the available answers and dream of something new and different.

By the time I leave, "false" is winning slightly over "true," but it's pretty evenly divided. "Capitalism Works for Me! True or False" is in Times Square through Oct. 9. Lambert got support from Times Square Arts and The French Institute Alliance Française.