Accessibility links
What A Downed Black Hawk In Somalia Taught America It's been 20 years since the Battle of Mogadishu, a mission gone wrong that cost 18 American lives. The operation and its aftermath left an opening for extremists, says journalist Mark Bowden, and made the U.S. more cautious about sending troops into foreign conflicts. Would the operation go differently today? 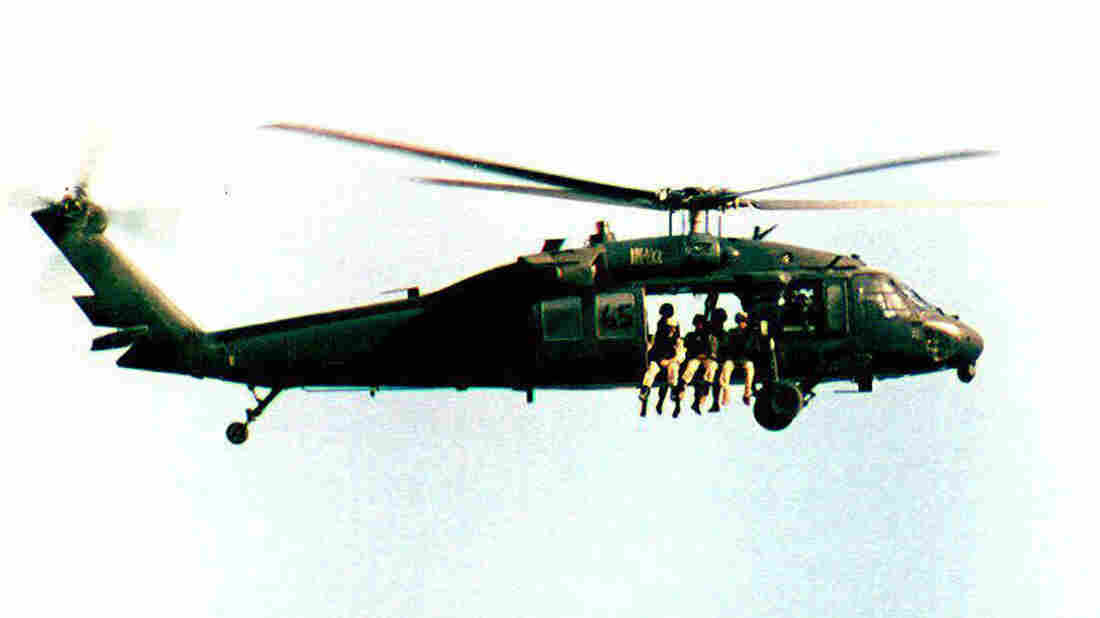 A U.S. UH-60 Black Hawk helicopter flies over Somalia in September 1993, a month before the battle of Mogadishu. Alexander Joe/AFP/Getty Images hide caption 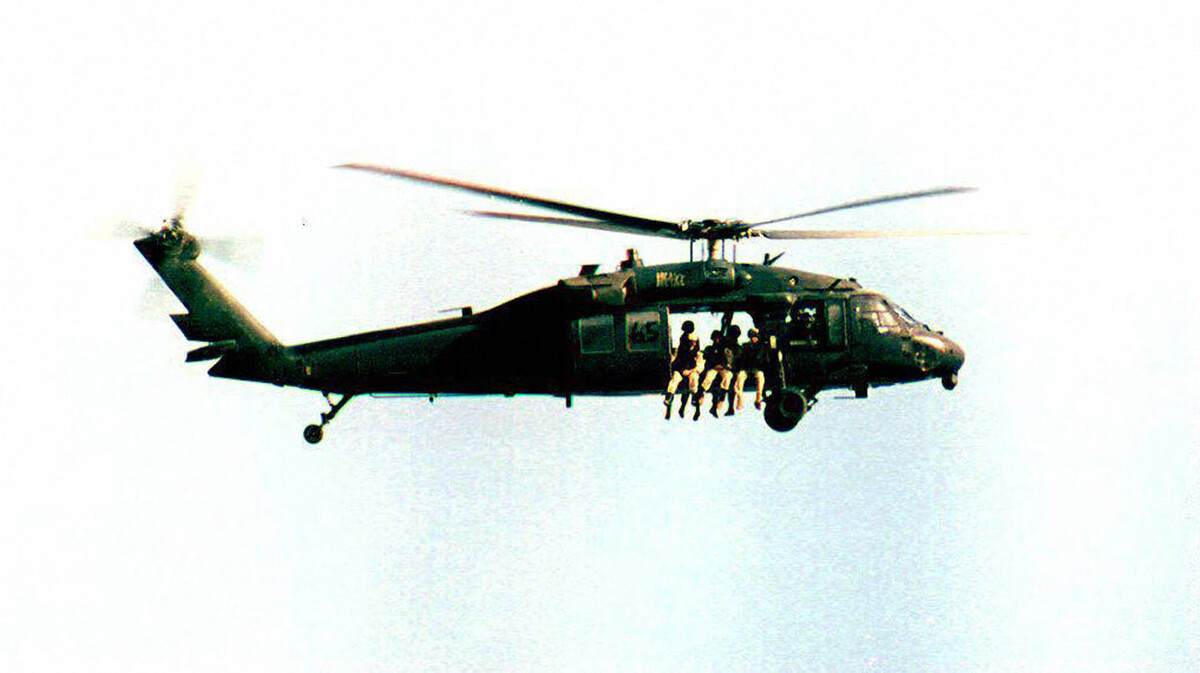 A U.S. UH-60 Black Hawk helicopter flies over Somalia in September 1993, a month before the battle of Mogadishu.

This week marked the 20th anniversary of the Battle of Mogadishu, the deadliest firefight U.S. forces had faced since Vietnam.

The incident ultimately pushed the U.S. out of Somalia, leaving a safe haven for extremist groups.

It continues to impact U.S. foreign policy today, from the rise of Islamists to the nation's reaction when asked to send American troops into harm's way.

'Things Did Not Go Well'

There was never even supposed to be a Battle of Mogadishu. In one of his final acts after losing the 1992 election to Bill Clinton, President George H.W. Bush sent American forces into Somalia on a humanitarian mission to bring food to the victims of a raging civil war and man-made famine.

But by the fall of 1993, the mission had expanded to one of restoring a government in Somalia. On Oct. 3, a special ops team was sent into Mogadishu to arrest two top lieutenants of the warlord Mohammed Aidid, who controlled the city.

"They estimated it would take 30 minutes to 45 minutes to conduct the raid, but things did not go well," says journalist Mark Bowden, who reported on the events of that day.

His account, first in The Philadelphia Inquirer, then in a book and finally in a blockbuster film, gave the Battle of Mogadishu the name by which it's better known today: Black Hawk Down.

Bowden interviewed the men who survived the mission, including Shawn Nelson, an M60 gunner who roped down to the scene from a helicopter. 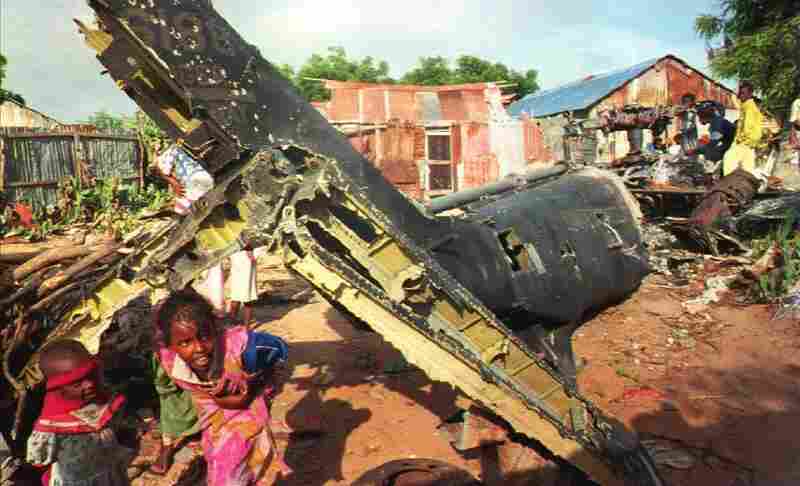 In December 1993, Somali children play around the wreckage of a U.S. helicopter in Mogadishu. Alexander Joe/AFP/Getty Images hide caption 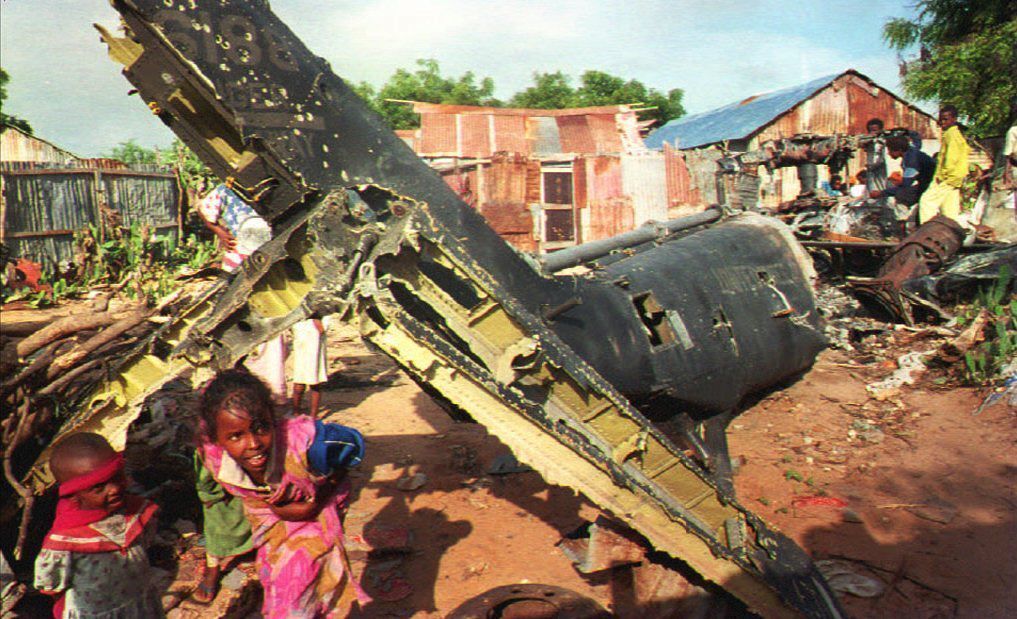 In December 1993, Somali children play around the wreckage of a U.S. helicopter in Mogadishu.

"We immediately started taking fire from the ground. I could see people below us with weapons maneuvering about," he told Bowden.

Nelson said that rangers did arrest their two targets, along with about 20 other Somalis who were in a house with them. But taking on so much fire in the busy streets, there was no way to get out fast.

"The longer they stayed, the intensity of the fire that the troops encountered increased, including the fire directed at the helicopters overhead," Bowden says.

About 40 minutes into the mission, one of the Black Hawk helicopters circling overheard was hit by a rocket-propelled grenade, spun out of control and crashed. Not long after, a second Black Hawk was shot down. More men were sent in to secure the crash sites and get the soldiers out. But the rescue team itself got pinned down.

"I said a little prayer," says Spc. Phil Lepre, who was on that rescue convoy, "took off my helmet, looked at my daughter's picture, I said, 'Babe, I hope you have a wonderful life.' "

Meanwhile, back in America, the same news networks that broadcast the start of the peaceful humanitarian mission less than a year earlier now ran horrific footage of Aidid supporters desecrating the corpses of U.S. soldiers.

All of this intensified the pressure on then-President Clinton to get U.S. troops out of the country.

"We had gotten to a point ... where we kind of thought that we could intervene militarily without getting hurt, without our soldiers getting killed. The incident that I call Black Hawk Down certainly disabused us of that," Bowden tells Arun Rath, host of All Things Considered.

After the Battle of Mogadishu, Clinton said that it was a mistake for the United States to play the role of police officer in Somalia. He announced a six-month plan to remove U.S. troops from the country.

The battle likely caused "an excessive concern [to] avoid risking American forces on the ground" during the Clinton administration, Bowden says. And to an extent, that calculation continues to play a role in foreign policy decisions, he says, even through the wars in Iraq and Afghanistan.

The incident also had an impact on extremists, who could take advantage of the U.S. withdrawal. The lawlessness that followed the American exit created a recruiting ground for terrorist organizations.

"They are by definition extremists, so they lack a large degree of popular support. They can only succeed in areas where they can impose their rule," Bowden says. Plus, four years after the battle, the only schools open in Mogadishu were those run by Islamists.

"So we, by withdrawing from Somalia, left a lawless region ripe for al-Qaida and gave at least a whole generation of Somalis over to these Islamist fundamentalists to be educated and groomed," Bowden says.

When the U.S. announced its withdrawal, it also gave Osama bin Laden a narrative to latch onto.

"His message was, 'Well, we can defeat this great power because they're not used to hardship and tragedy, so if we can inflict that they'll retreat,' " Bowden says. That message was aimed at those who might have previously been deterred by the United States' power.

If It Happened Again

Since 1993, there have been significant advances to America's special operations.

"Our ability to gather intelligence to find people, to observe them from a distance with the addition of a fleet of drones that we now have flying is vastly improved," Bowden says. "And we also have special operators who — after Iraq and Afghanistan — who have had more experience conducting the kind of raid that took place back in 1993 than any force like it in the history of the world."

If conducted today, the Mogadishu raid would have been done more efficiently, Bowden suspects. He says there also would be better intelligence about the risks ahead of time. But that's not to say there wouldn't be hiccups.

"The men who conducted that raid [in '93] were extremely professional, and they didn't do anything wrong," he says. "The fact is that when you go into combat, it's very not only possible but very likely that ... unanticipated things will happen and you'll end up in a much bigger fight than you would prefer."