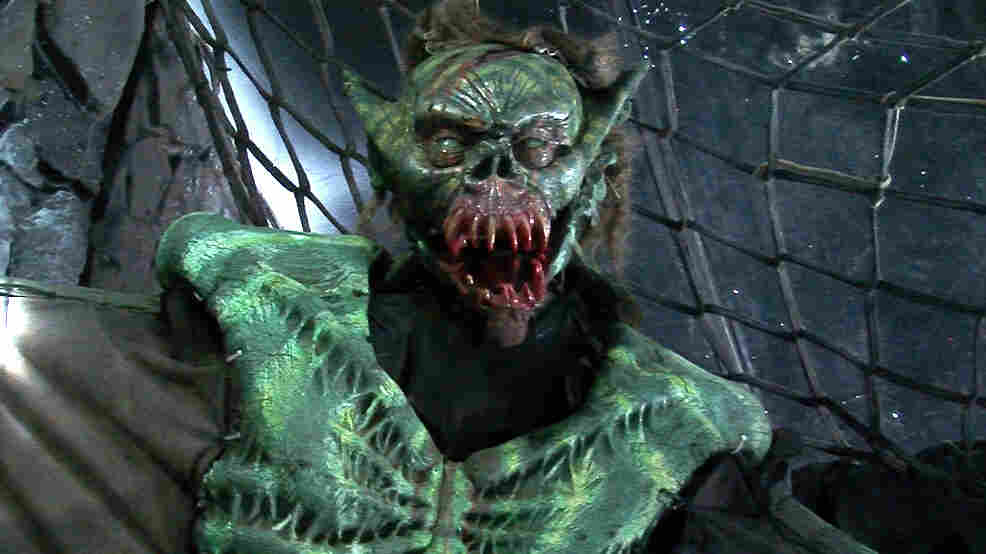 To get an interview at the Scream Zone in San Diego County, Calif., applicants have to get past a green demon first. Beth Accomando for NPR hide caption 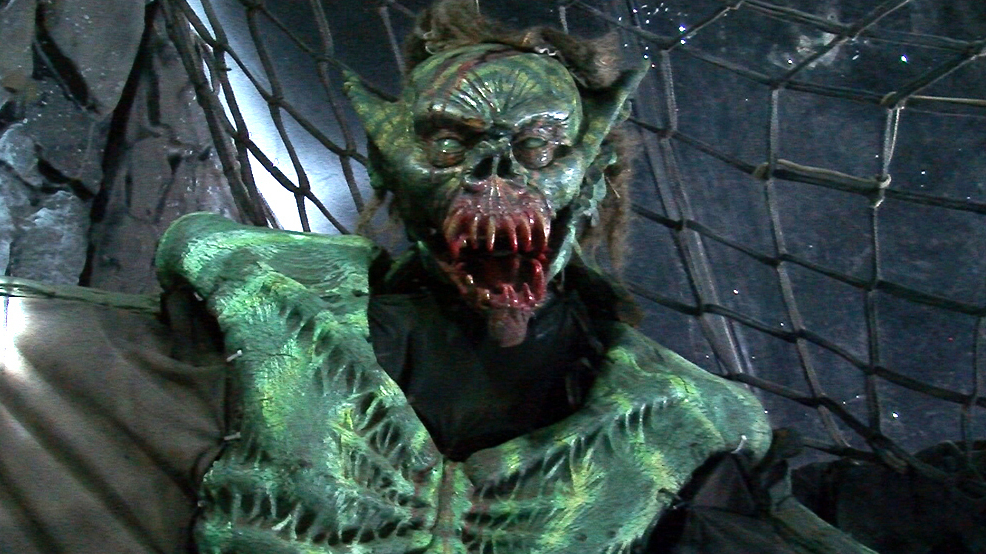 To get an interview at the Scream Zone in San Diego County, Calif., applicants have to get past a green demon first.

In this business, screaming is one of those skills. Also, being certified on a chainsaw.

"We're always looking for folks who have a passion for wielding a chainsaw while wearing makeup and costume and just scaring the heck out of people," says Jennifer Struever.

Streuver is the event manager for Scream Zone at the Del Mar Fairgrounds in San Diego County, Calif. Haunted houses are part of the multibillion-dollar business of Halloween — and they need employees.

Streuver is conducting interviews inside the Scream Zone's tented maze, in a room that could be Leatherface's kitchen. It has a slab of meat hanging from the ceiling and impressive cutlery on the wall.

"We do ask people if they have any problem with chainsaw fumes, moving floors, strobe lights, loud noises," Streuver says. "We need to know if they're allergic to stage blood or latex, because they will be experiencing that in their costumes and makeup."

Over at the haunted castle end of the Scream Zone tent, a huge green demon salivates over potential victims — ahem, applicants — as they wait to be called for their interview. It's so hot that the multiple fans do little to help, and the heat feels like it could melt the flesh off the living dead.

Geraldo Figueroa could get into that. "I'd like to be a zombie," he says. "It seems like it'd be really fun, especially with the new attraction" — zombie paintball safari.

That interests Autumn Maize, who's eager to display her undead expertise. "Well, since zombies can't really breathe or anything, there's not really much sound that they make except for maybe some guttural gases," she says before giving an example of what that sounds like. "But you can make some great sounds with your mouth like chewing sounds that don't require breathing — so I get a little technical."

Maize is exactly the type of person Struever is looking for. "We're looking for folks who have a passion for Halloween and any theatrical or athletic experience," Struever says.

Or, lung power — as Samantha Topacio demonstrates. "I mean, I haven't screamed in awhile because no one really recreationally screams just for fun ," she says.

Topacio performed better at her audition. "I did one that as a victim-type thing," she says, "and then the other one was more like a creepy antagonist-type character."

The screams landed her the job and got her a high-five from Ashley Amaral, who's been working at the Scream Zone for years. The petite, perky blond takes wicked delight in her job.

"It is so awesome to see big burly men crumble to the ground," she says. "You think they're so tough. They come in like, 'Oh, you're just a girl, please.' And they just crumble. They will run out of this and say, 'Oh, blank, no, I'm out of here.' "

Each time someone flees for an emergency exit, it's a bloody feather in her co-workers' cap. There's a scoreboard where they keep a tally of victims who don't make it through the House of Horror. Last year it was 523. It gives a whole new meaning to customer satisfaction.