Accessibility links
Breaking The Silence Between The U.S. And Iran On Sept. 27, President Obama called Iranian President Hassan Rouhani, ending 34 years of silence between the leaders of the U.S. and Iran. A phone call between the leaders was greeted with great hope and deep skepticism, born from decades of bad blood, mistakes and sometimes outright aggression. 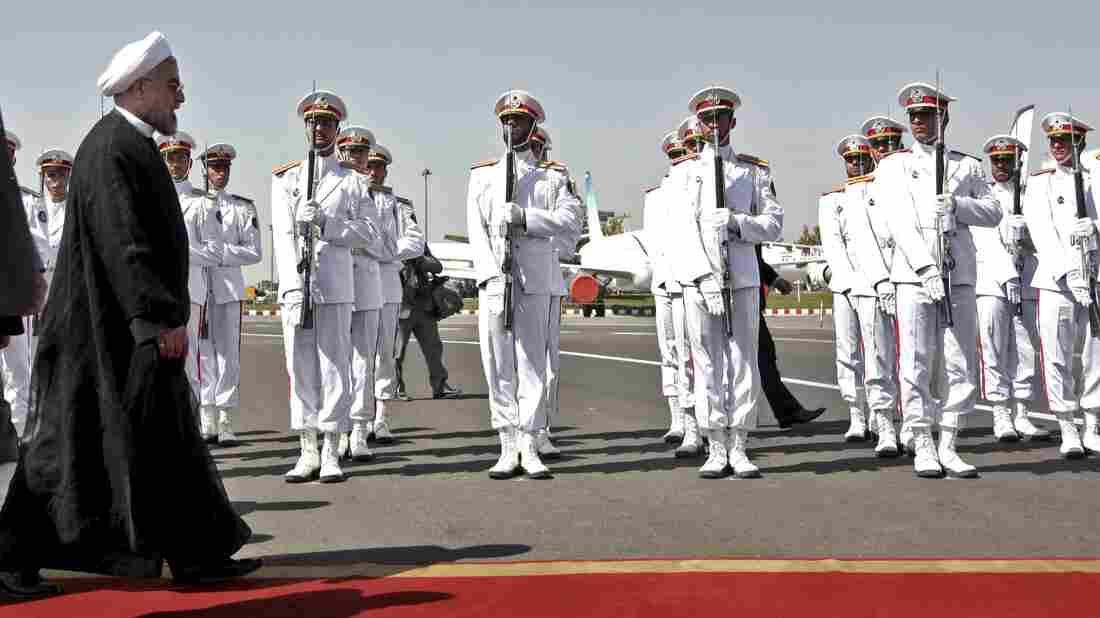 Iranian President Hassan Rouhani reviews the honor guard upon arrival from the U.S. at Mehrabad airport in Tehran, Iran, on Sept. 28. Iranians from across the political spectrum hailed the historic phone conversation between President Barack Obama and Rouhani, reflecting wide support for an new tone between the two nations. Ebrahim Noroozi/AP hide caption 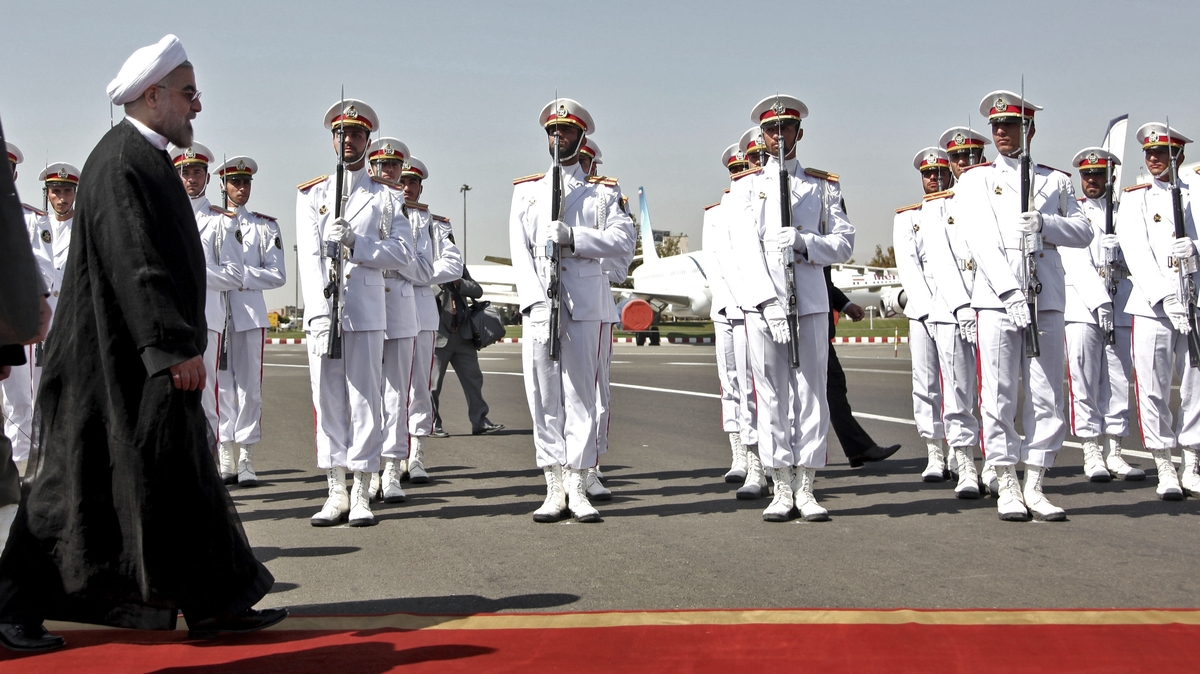 Iranian President Hassan Rouhani reviews the honor guard upon arrival from the U.S. at Mehrabad airport in Tehran, Iran, on Sept. 28. Iranians from across the political spectrum hailed the historic phone conversation between President Barack Obama and Rouhani, reflecting wide support for an new tone between the two nations.

Tension, distrust, hostility: For more than 30 years, those words have described the relationship between Iran and the United States. But there's one other overriding word to describe it: silence.

Since 1979, no American president had spoken with a leader of Iran. That all changed on Sept. 27, when President Obama entered the White House briefing room and said that he had spoken with Hassan Rouhani, Iran's new president, by telephone.

This apparent milestone in U.S.-Iran relations was big news. The talk between Obama and Rouhani was greeted with great hope — and deep skepticism, born from three decades of bad blood, mistakes and sometimes outright aggression.

The long silence started in 1979, but the roots of the discord are much deeper. In 1953, Iran was a democracy with a popular prime minister. But the CIA helped overthrow that government and re-installed a monarch — the shah, Mohammad Reza Pahlavi — who was much friendlier to U.S. interests.

Pahlavi would rule brutally until 1979, when he fled amid mass protest. Stepping into that void was Iran's revolutionary leader, Ruhollah Khomeini, who came out of exile to become the grand ayatollah — the supreme leader of the new Islamic Republic of Iran.

Columbia University professor Gary Sick tells NPR's Arun Rath the new Islamic Iranian state was a "new creature" to the U.S. — and to much of the rest of the world.

"To say we were unprepared is absolutely an understatement," says Sick, who also served on the National Security Council for President Jimmy Carter in 1979.

The relationship frayed further when on Nov. 4, 1979, protesters and militants overran the American embassy in Tehran, taking dozens of staff members as hostages. They demanded that the shah, who was in the U.S. seeking medical treatment, be returned home to face justice.

After 444 days, the hostages were released, but the crisis caused the U.S. to formally break diplomatic relations with Iran. Since then, the two countries have gone through many periods of tension and occasional opportunity. 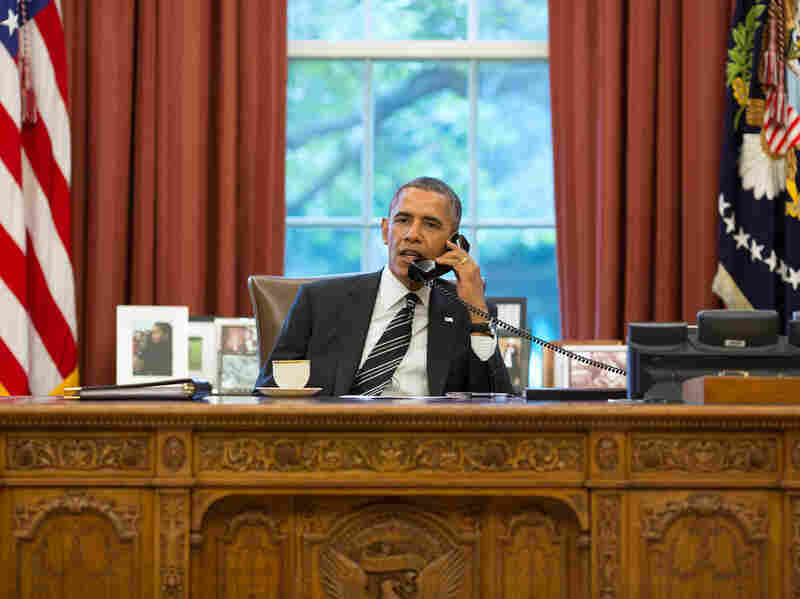 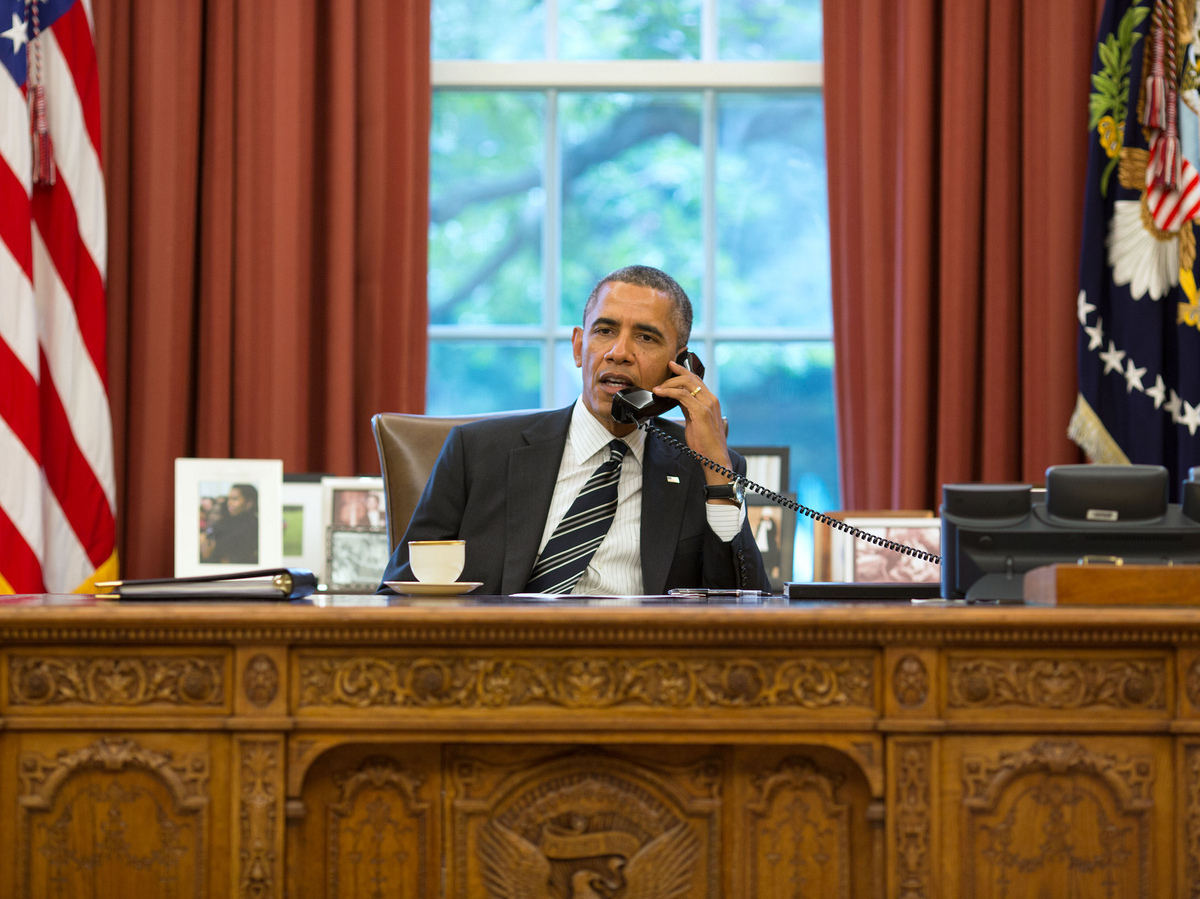 President Barack Obama talks with President Hassan Rouhani of Iran during a phone call in the Oval Office, Sept. 27, 2013.

The antagonism between Iran and the U.S. was highly present during the eight years of Mahmoud Ahmadinejad's presidency. The hard-line president was not shy about his feelings toward the U.S.

"American empire in the world is reaching the end of its road, and its next rulers must limit their interference to their own borders," Ahmadinejad said at the U.S. General Assembly in 2008.

Known as a Holocaust-denier, Ahmadinejad's government aggressively jailed critics and protesters in a popular uprising after a contested election in 2009. He also pursued a nuclear program over international objections. Ahmadinejad said the program was a peaceful pursuit of nuclear energy.

The election of Rouhani this summer has struck a new tone in Iran.

"The recent election in Iran represents a clear, living example of the wise choice of hope, rationality and moderation by the great people of Iran," Rouhani said in a speech at the U.N. in September.

Then came the phone call between Rouhani and Obama, a simple act that Sick says changed the entire dynamic.

"That was clearly the most important event that has taken place in the last 34 years. Nothing even comes close to it," the professor says.

But there are voices calling for skepticism, among them Israel's Prime Minister, Benjamin Netanyahu. He recently told the U.N. that Iran was hiding behind a screen of "soothing rhetoric."

"Now I know Rouhani doesn't sound like Ahmadinejad, but when it comes to Iran's nuclear weapons program ... Ahmadinejad was a wolf in wolf's clothing [and] Rouhani is a wolf in sheep's clothing," Netanyahu said.

Hope On The Horizon

Journalist Isa Saharkhiz has been a long-time critic of the Iranian government. He was jailed in 2009 because of his dissent and served more than four years in prison. On Thursday, he was released.

Saharkhiz says he was beaten, kept in solitary confinement and became seriously ill while in prison. But now that he has been released, he says there are signs of real change in Iran, and he's optimistic about the country's future. He also believes Rouhani is making genuine changes.

"I am sure he believes that [he] should make some changes inside of Iran and Iran's relations with other countries," Saharkhiz tells Rath.

Saharkhiz says he knows any changes in the relationship between Iran and the U.S. will be difficult, but he believes the two countries may be at a "turning point."

Just three days since his release from prison, Saharkhiz says he has already started to write again, fully aware he may be arrested.

Iran Says It Has Arrested 4 In Nuclear Sabotage Plot

Suzanne Maloney, a senior fellow at the Saban Center for Middle East Policy at the Brookings Institution, also believes the change in the U.S.-Iran relationship is real. Maloney also worked on Iran policy for the George W. Bush administration, and she says the change is the result of several factors, including sanctions that have had a debilitating impact on Iran's economy.

"President Ahmadinejad was really very divisive and raised a lot of concerns about the future of the Islamic Republic," Maloney tells Rath. "The culmination of all these different factors, help persuade Iran's hard-liners ... that now is the time, in fact, to engage in a very different fashion with Washington."

While Rouhani's election was met by cheers from many young people, there was plenty of protest and shoe-throwing from the hard-liners. Despite that, Maloney believes Rouhani was elected quite deliberately by the people and the establishment with a mandate "to test the possibilities of a deal with the West, and with Washington in particular, on the nuclear issue."

Maloney says there is a debate within Iran about whether or not it was appropriate for the nation's president to engage so directly with the leader of the country that is still officially referred to as "the Great Satan." But she says that debate is actually quite a healthy one.

"And what we haven't seen is any indication that the establishment is prepared to shut Rouhani down," she says.

As far as the phone call, Maloney says it won't be remembered as the first step in a quick, easy process, but instead as the start of a long, slow thaw between two old adversaries that have a great deal in common.

"I do think that inevitably we are looking toward a long-term change in Iran that is simply a function of its own population," she says.

Nuclear talks with Iran restart in mid-October, and there are more signs that the U.S.-Iran relationship is changing. Iran's parliament has overwhelmingly supported Rouhani's diplomacy with Obama. Iran's ayatollah, however, also called the U.S. "disloyal" and "untrustworthy." Eventually, the divided U.S. Congress will also have its say.

For now, official relations remain suspended. And if you go to Tehran, the U.S. embassy has become a museum. Old typewriters and photographs stay in place, and the desks have been empty since 1979 — when everything changed.