Accessibility links
George R.R. Martin, Author And ... Movie-Theater Guy? The author of the wildly successful Game of Thrones books has been spending his days working on reopening an old movie theater in Santa Fe — much to the displeasure of fans who think he should be writing the next book. 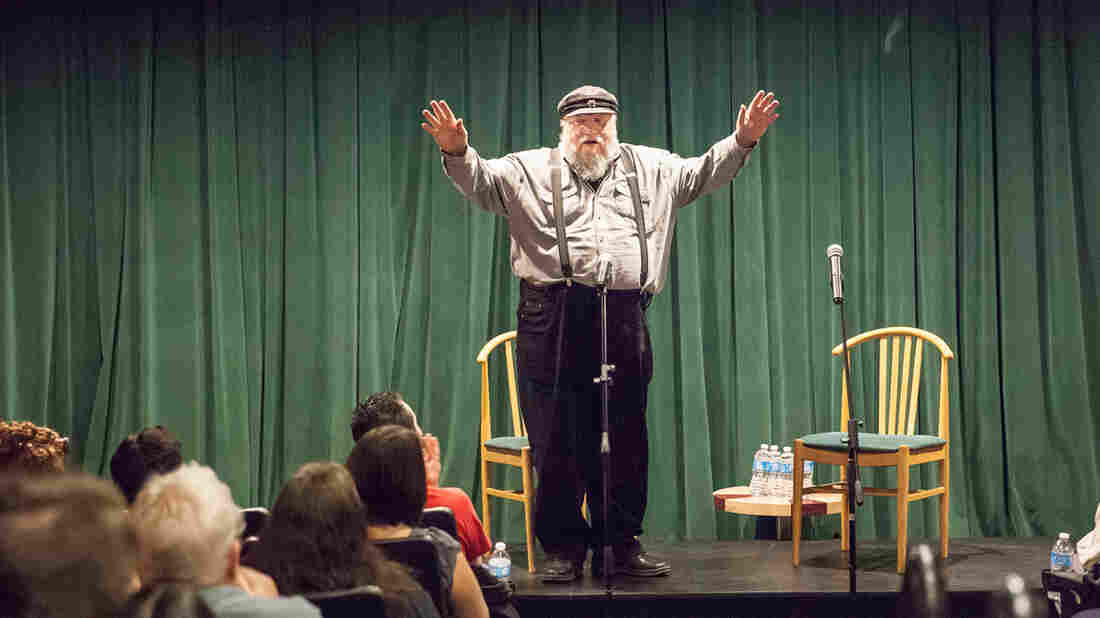 George R.R. Martin prepares to introduce author Neil Gaiman and performer Amanda Palmer at charity benefit at his newly renovated Jean Cocteau cinema in Santa Fe, N.M., on Sept. 29. Reopening the old movie house has been a passion project for the Game of Thrones author — but for some of his fans, it's one more distraction that's come between them and Martin's unfinished epic. Grayson Schaffer for NPR hide caption 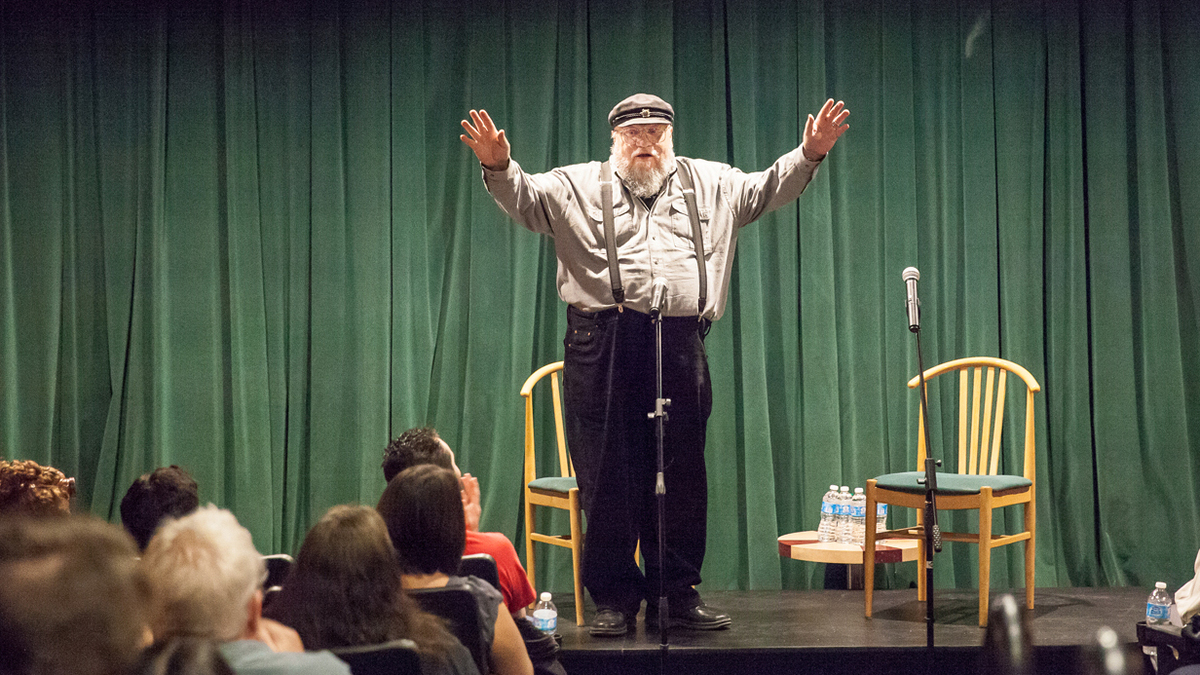 George R.R. Martin prepares to introduce author Neil Gaiman and performer Amanda Palmer at charity benefit at his newly renovated Jean Cocteau cinema in Santa Fe, N.M., on Sept. 29. Reopening the old movie house has been a passion project for the Game of Thrones author — but for some of his fans, it's one more distraction that's come between them and Martin's unfinished epic.

George R.R. Martin's hit fiction series A Song of Ice and Fire has sold more than 25 million copies and sparked an HBO adaptation, Game of Thrones, that won two Emmys in 2013, bringing its total to 10.

But many fans are grumbling that Martin hasn't been spending enough time of late in his mythical kingdom of Westeros and its surroundings. On the list of things Martin is doing instead of writing the next Game of Thrones book? Reviewing the latest episodes of Breaking Bad, editing a sci-fi series and writing a novella.

This summer, even HBO's execs piped up, saying that they'd really appreciate it if Martin were to "get busy writing" — specifically, writing The Winds of Winter, the next book in the Game of Thrones series. It's years overdue.

'A Great Moment Because It Was Shared'

Martin is dressed in black, in his iconic fisherman's cap and suspenders. He's standing at the empty concession stand of the Jean Cocteau, a 120-seat single-screen Santa Fe, N.M., theater that the local paper outed him as having purchased last April.

Contractors are crawling over the place, putting letters on the marquee, fixing leaks. In 24 hours, the Jean Cocteau is slated to open for the first time in seven years. And there's plenty to do.

Jon Bowman is the general manager and a longtime Martin minion.

"Oh, he calls all of his associates minions," Bowman explains. "It sounds better than crony, you know?"

Bowman is here 15 hours a day in the run-up to the opening, but he can usually still find time to give tours of the restored theater. But today it's Martin giving the tour.

The Jean Cocteau is a beautiful little theater, with purple and green serpentine hallways restored to their original glory. We head up a flight of stairs. 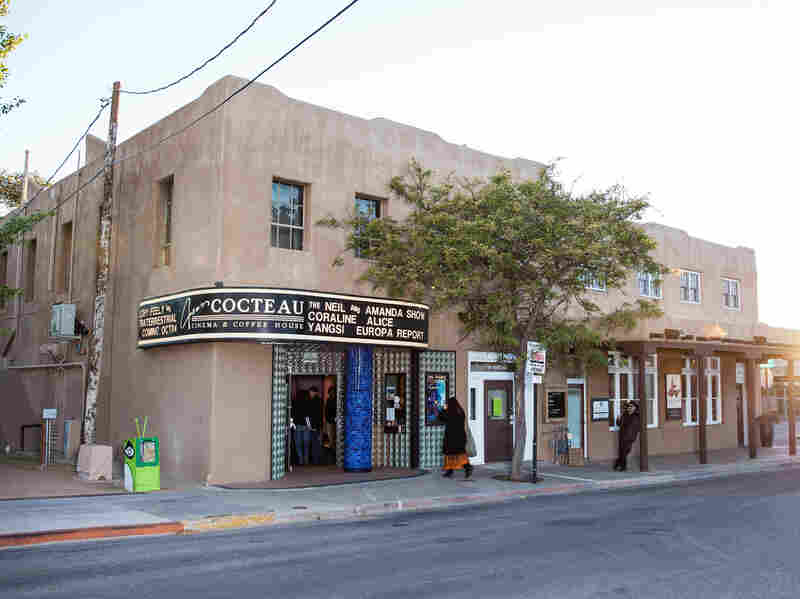 The Cocteau theater was dark for seven years until Martin purchased and renovated it. It reopened in early August. Grayson Schaffer for NPR/ hide caption 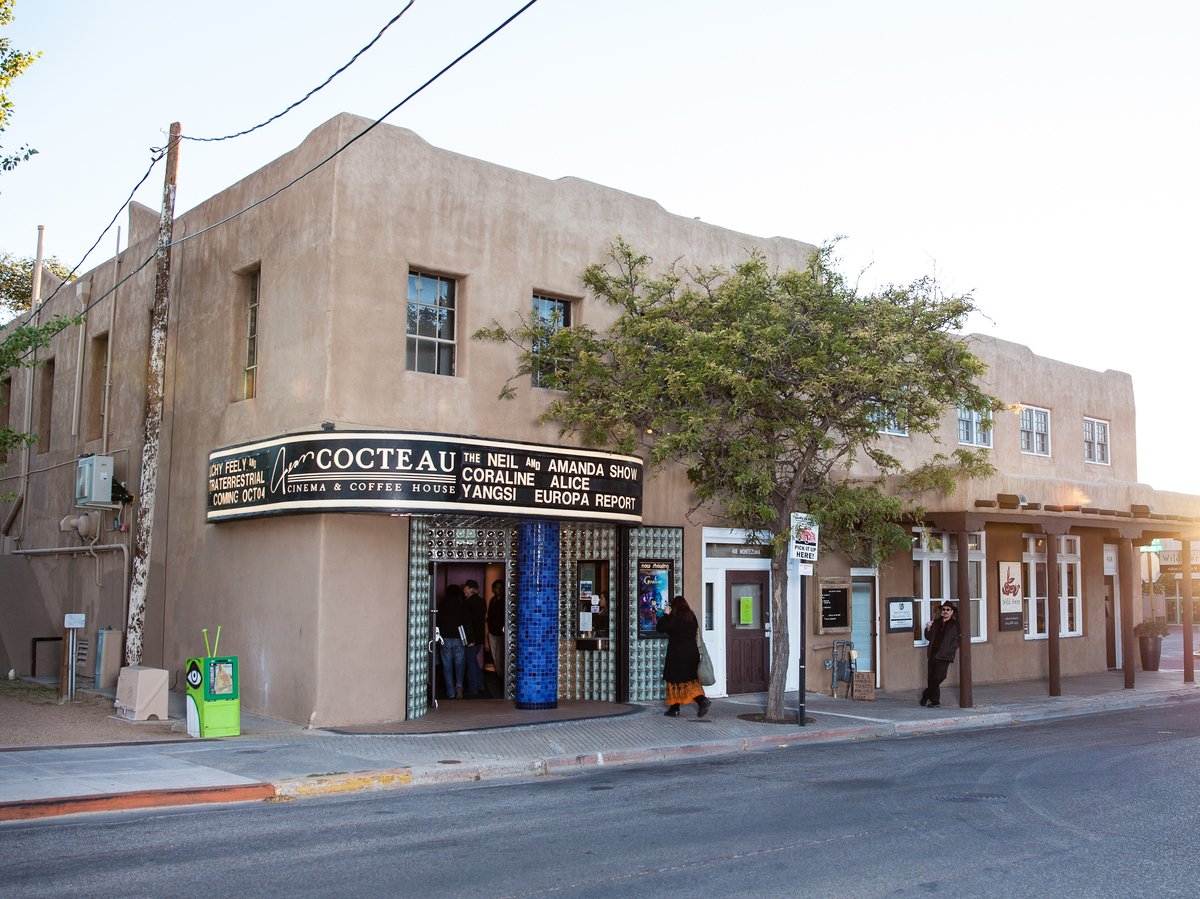 The Cocteau theater was dark for seven years until Martin purchased and renovated it. It reopened in early August.

He's panting. He gets out of breath easily. He's 64 and overweight. He reads the online forums and knows that some of his harsher fans have made crude jokes about him having a heart attack before he finishes his books.

But when he talks about deciding to reopen the Cocteau, his eyes light up. His love of movies is rooted in his childhood growing up in the projects in Bayonne, N.J. He'd sit in the cavernous old movie palaces there, watching the monsters that would inspire his books.

Martin could have built a massive home theater here in Santa Fe, but he says there's nothing like watching a film with an audience. He remembers seeing Raiders of the Lost Ark for the first time, specifically the moment where Indiana Jones shoots an attacking swordsman in a crowded marketplace.

"And the shock that went through the audience — the audible gasp at that moment — and then the howl of laughter that followed it," he says. "That was a great moment in the cinema, and it was a great moment because it was shared. If you're sitting all alone in your living room, it doesn't have anywhere near the impact."

He shows off the projection booth, equipped with both an old-fashioned 35 mm film projector and a digital one. They'll start off with a week of Martin's favorite sci-fi films. Then they'll host musicals and readings and comedy acts — essentially whatever sounds like fun.

Next door, he shows off an unusual little room. All the old movie palaces used to have them, he says. It's what was once known as a "crying room."

"It's soundproofed," he says, noting that in a more decorous era, a parent would've stepped into that room to settle a crying infant.

In Martin's case, it provides for the possibility of a different kind of exile. He watches films from the crying room if the scene in the movie theater is just too much.

'Why Aren't You Home Writing?'

There's a line outside the Cocteau on opening night. The movie tickets, free for the first week, have already been given out, but eager fans wait in line in case of no-shows.

Martin is just inside the entryway, greeting people. "Come in, get some popcorn! Watch the show!"

One guy takes Martin's hand — looks him in the eye. "I just want to know why you're not home writing books," he asks.

This happens a lot. Martin just shrugs it off.

Inside, concessions are surprisingly cheap; Martin wanted it that way. It's more fun.

At last, it's time for the show to start.

"Thank you, guys," Martin says. "And thank you all for coming here to welcome back the Jean Cocteau cinema."

The lights dim. Martin walks up the aisle and out the back, to join his wife, Parris, in the crying room. And the show begins.

Meanwhile, Over At The Frankenstein Place

The scene is much the same on another evening at the sci-fi convention Bubonicon, which Martin has been attending since the '70s. He's doing a reading, and the room is bursting.

He's sharing passages from another side project, a 250,000-word complete history of Westeros. It's similar to what J.R.R. Tolkien did with the Silmarillion, so he's been calling it the "GRRMarillion."

"And when will the GRRMarillion come out? I don't know," he says. "I'm not working on it anymore; I've put all that aside while I try to finish Winds of Winter."

The Winds of Winter is due — as of now — to come out next year. There's supposed to be at least one more book after that.

"You know, there are writers, and I know some of them, who are very disciplined," Martin says. "Who write, like, four pages a day, every day. And it doesn't matter if their dog got run over by a car that day, or they won the Irish sweepstakes.

"I'm not one of those writers. I — I write emotionally. I'm an emotional person. So, you know, my best days are the ones where I can keep the distractions at a minimum so I can go into that world, the world of Westeros." 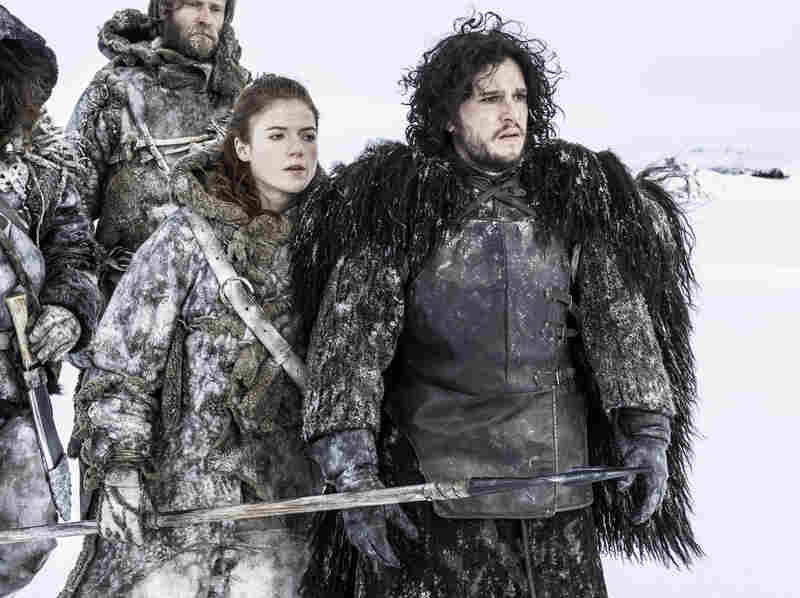 Ygritte (Rose Leslie) and Jon Snow (Kit Harington) in HBO's Game of Thrones. The show's most recent season covered roughly the first half of the third book; Martin has published five of a projected seven novels so far. Helen Sloan/HBO hide caption 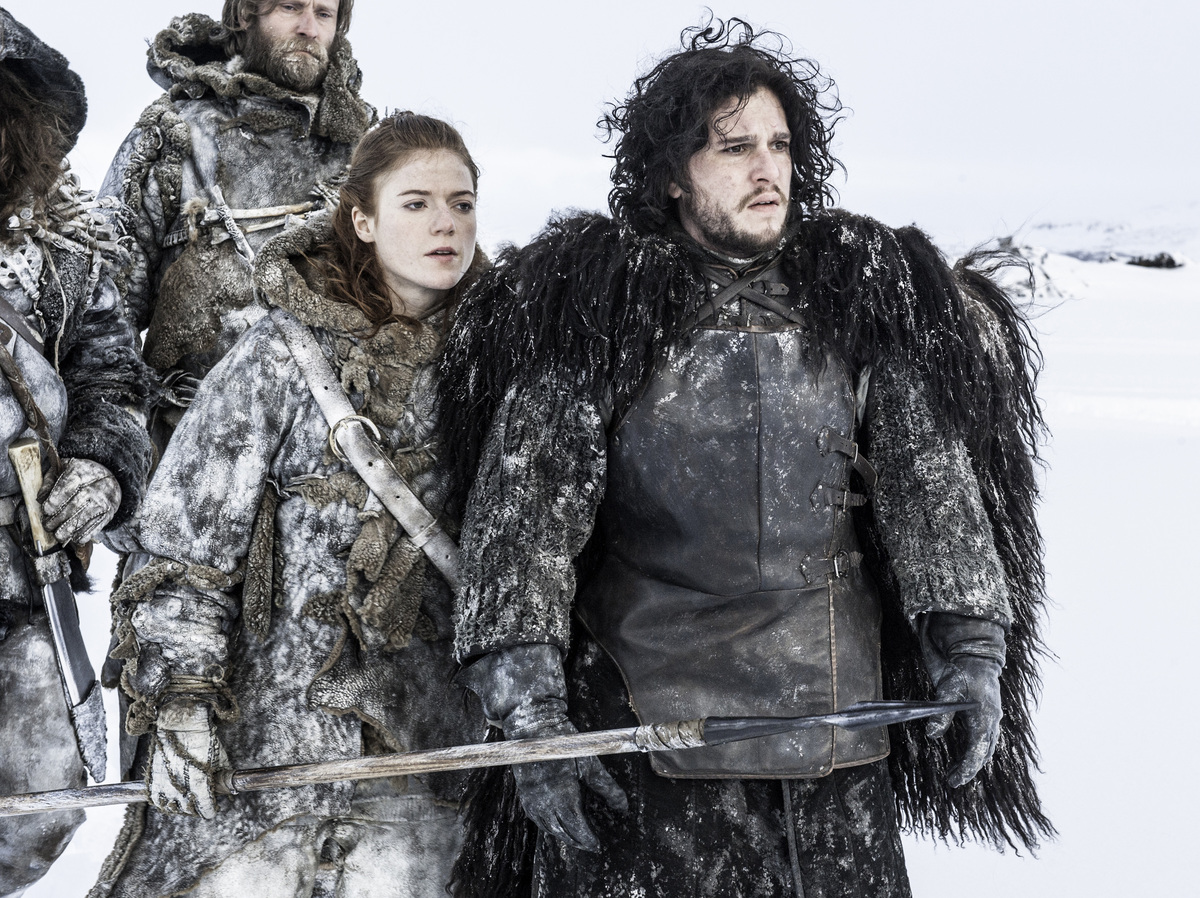 Ygritte (Rose Leslie) and Jon Snow (Kit Harington) in HBO's Game of Thrones. The show's most recent season covered roughly the first half of the third book; Martin has published five of a projected seven novels so far.

If he doesn't, HBO has said it's prepared to finish the TV show without him.

"Laying railroad track with the locomotive coming up behind you ... you better lay it faster," Martin says. "And that is the feeling I have right now. The locomotive in this case, of course, is not just the books but the TV show, which is moving along much faster than I'm laying the tracks."

Craig Chrissinger, who runs the Albuquerque sci-fi conference, has known Martin since long before he was famous. And he's seen Game of Thrones alter the author's life in some disturbing ways.

"Everything's different," he says. "I mean, after the Red Wedding episode" — a particularly brutal plot development in which Martin killed off several beloved characters — "they had death threats."

"When he gets that stuff, I know that it personally affects him," Krissinger says.

Back at opening night at the Jean Cocteau, it's just before Dark Star, the third and final film. Martin steps outside to admire the marquee.

But no matter what's showing on the screen, somehow Martin, the man himself, is the main attraction. A young fan walks up and asks to do a back flip next to him.

"As long as you don't kick me in the face," Martin says.

The kid's friends, standing by, take pictures of the spectacle. Martin is obliging, but after a few minutes, he slips back inside, into the crying room, escaping into the midnight movie.