Accessibility links
When It Comes To Brain Injury, Authors Say NFL Is In A 'League Of Denial' Brothers Mark Fainaru-Wada and Steve Fainaru take an exhaustive look at how the NFL has dealt with allegations that playing football can lead to brain damage. They say the NFL has repeatedly avoided tying football to brain injury, even as it has given disability payments to former players with dementia-related conditions.

The casket bearing the body of former Pittsburgh Steelers center Mike Webster is surrounded by flowers, after funeral services in Pittsburgh in September 2002. Mark Fainaru-Wada and Steve Fainaru, authors of League of Denial, point to Webster's autopsy as one of the most significant moments in the history of sports. Keith Srakocic/AP hide caption

When the Pittsburgh Steelers won four Super Bowls in the 1970s, you could argue that no one played a bigger role than Mike Webster. Webster was the Steelers' center, snapping the ball to the quarterback, then waging war in the trenches, slamming his body and helmet into defensive players to halt their rush. 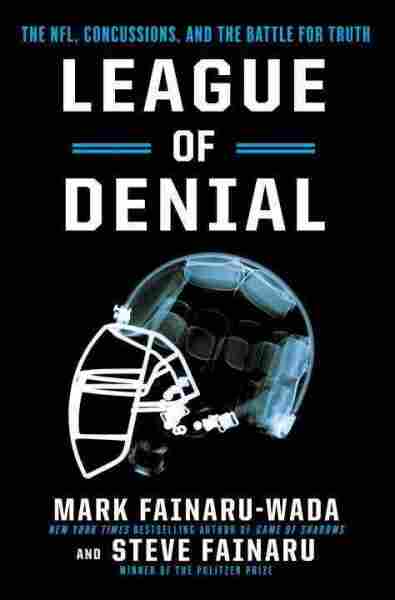 The NFL, Concussions and the Battle for Truth

by Mark Fainaru-Wada and Steve Fainaru

Title
League Of Denial
Subtitle
The NFL, Concussions and the Battle for Truth
Author
Mark Fainaru-Wada and Steve Fainaru

He was a local hero, which is why the city was stunned when his life fell apart. He lost all his money, and his marriage, and ended up spending nights in the bus terminal in Pittsburgh. Webster died of a heart attack, and on Sept. 28, 2002, came the autopsy.

"His body ends up in the Allegheny County coroner's office," ESPN investigative reporter Mark Fainaru-Wada tells NPR's David Greene. "And there's a young junior pathologist there named Bennet Omalu. He makes this decision sort of on the spur of the moment to study Mike Webster's brain."

Fainaru-Wada and his brother, Steve Fainaru, have written a new book called League of Denial, which was also turned into a Frontline documentary on PBS. They take an exhaustive look at how the NFL has dealt with allegations that playing football can lead to brain damage. They interviewed doctors, scientists, former players and their family members — though, not NFL officials, who declined interview requests to them and also to NPR. The authors point to that autopsy of Webster as one of the most significant moments in the history of sports.

Omalu found Webster had a disease that would be called chronic traumatic encephalopathy, or CTE. The disease can cause the behavioral changes that afflicted Webster. He was sure the CTE came from repeated pounding on the football field.

"He thought that well, this is information that the National Football League would probably like to have," Fainaru says. "He says he thought [the NFL] would give him a big wet kiss and describe him as a hero."

That's not what happened. Instead, the NFL formed its own committee to research brain trauma. The league sent its findings to the medical journal Neurosurgery, says Fainaru-Wada. "They publish in that journal repeatedly over the period of several years, papers that really minimize the dangers of concussions. They talk about [how] there doesn't appear to be any problem with players returning to play. They even go so far as to suggest that professional football players do not suffer from repetitive hits to the head in football games."

Over the last decade, the NFL has repeatedly avoided tying football to brain damage, even as it has given disability payments to former players with dementia-related conditions. 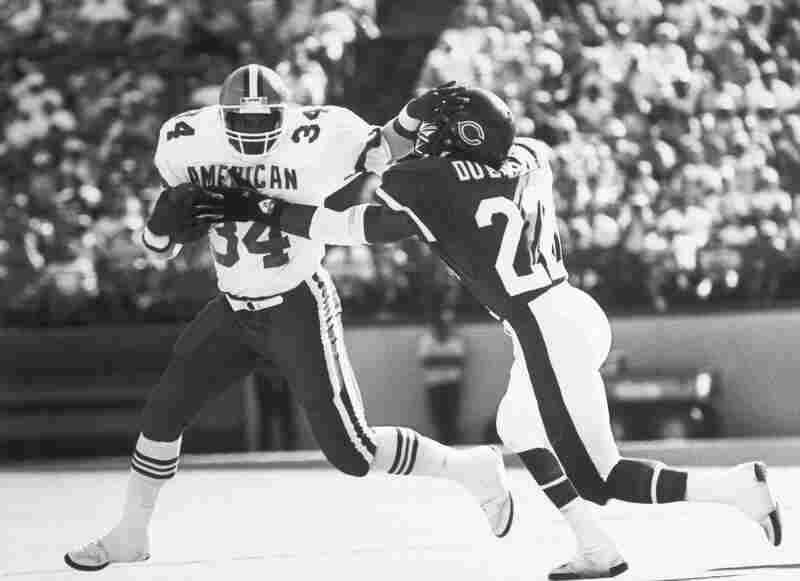 Dave Duerson (right), in 1988. Duerson committed suicide in 2011 and wrote a note that included this request: "Please see that my brain is given to the NFL's brain bank." AP hide caption 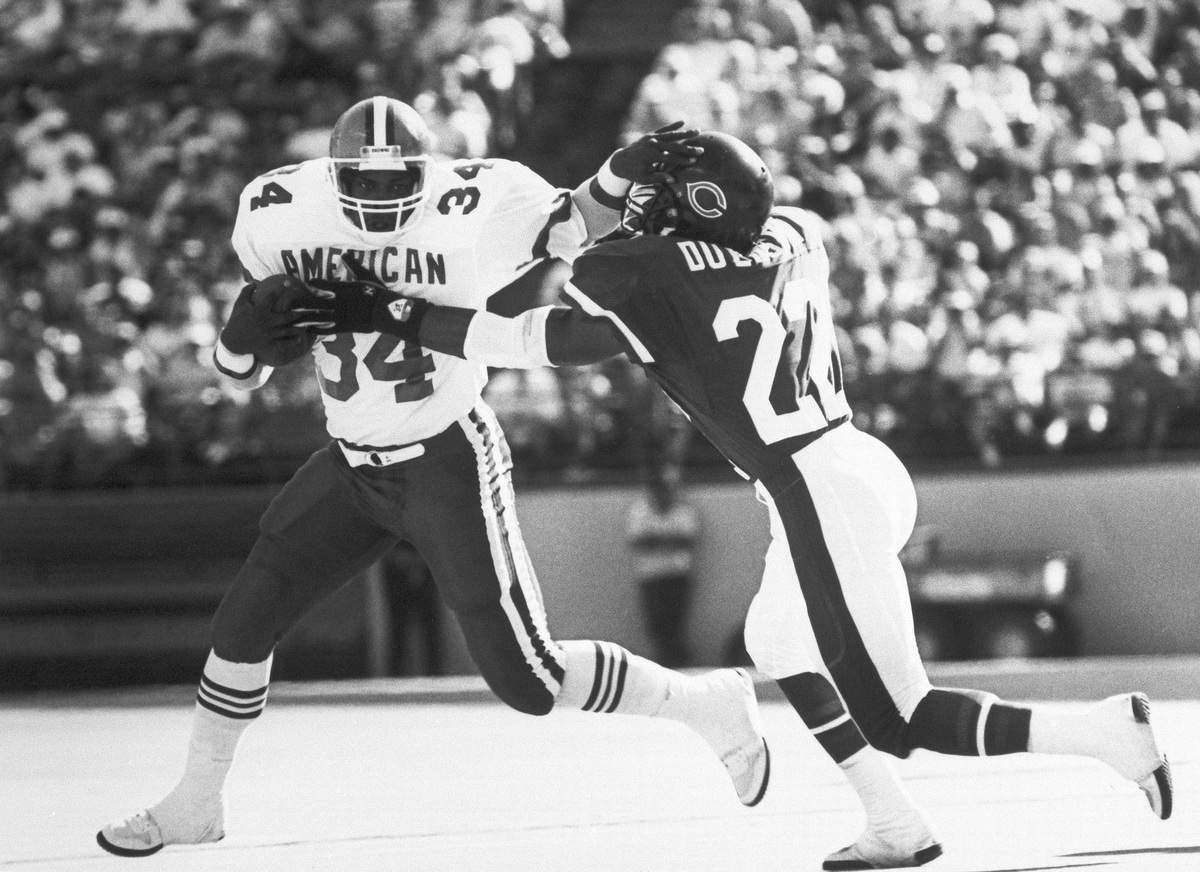 Dave Duerson (right), in 1988. Duerson committed suicide in 2011 and wrote a note that included this request: "Please see that my brain is given to the NFL's brain bank."

On the death of safety Dave Duerson in 2011

Fainaru-Wada: Duerson was a long-time safety, a defensive back for the Chicago Bears — and one of the hardest hitters in the game. He had a reputation as just a powerful, powerful hitter. Also, ultimately, after his retirement, a very, very successful businessman. He also was on this committee that was giving out disability payments to players, and became sort of a lightning rod for retired players who believed that Duerson was effectively becoming a shill for the league and the union and trying to keep retired players from getting money. ... So, that's the backdrop in which you see Dave Duerson — until he ends up committing suicide and he leaves a note basically describing why he killed himself and how he realized that he basically was going mad.

Fainaru: One of the more chilling things about this whole thing is that the people who are dying, many of them are dying in very macabre ways. They're drinking antifreeze or they're driving their trucks into a tanker truck at 100 miles per hour. Duerson, after spending years denying that this was an issue and warning that the NFL was turning the league into a league of sissies, he then shoots himself in the chest to preserve his brain and then he writes this note:

Watch A Clip From 'League Of Denial'

"My mind slips. Thoughts get crossed. Cannot find my words. Major growth on the back of skull on lower left side. Feel really alone. Thinking of other NFL players with brain injuries. Sometimes, simple spelling becomes a chore, and my eyesite goes blurry ... I think something is seriously damaged in my brain, too. I cannot tell you how many times I saw stars in games, but I know there were many times that I would 'wake up' well after a game, and we were all at dinner."

And then on the last page, it's almost as if he had remembered something that he had forgotten: "Please, see that my brain is given to the NFL's brain bank."

Fainaru-Wada: Indeed, his brain was studied, and it was found to have CTE.

On reaching a scientific consensus linking football to brain injury

Fainaru: I do think there is a consensus now among neuroscientists. I think the real question now is, what is the prevalence, is it still relatively rare, or is this something that's an epidemic, as some people have suggested? And then, are there other mitigating factors? Mike Webster and some of these other people we know had a history of mental illness in their families. Webster had used steroids and some people have suggested that the combination of the head trauma and these other abuses might be contributing to it. We just don't know at this point.

Clearly they're making changes to the sport in an effort to make it safer. Whether it can be safer or not is a whole other question. It's a collision sport whose violence is loved by all of us who love the game.

On what's at stake for the NFL

Fainaru-Wada: This is a $10 billion industry, right? And it's hard to imagine that the NFL goes away. Clearly they're making changes to the sport in an effort to make it safer. Whether it can be safer or not is a whole other question. It's a collision sport whose violence is loved by all of us who love the game. There's a powerful point in the book where Bennet Omalu — the scientist we described who first sees CTE in a football player — is showing his slides and his findings to a doctor who is connected to the NFL, and the doctor says something like, "If 10 percent of mothers come to believe that football is dangerous — to the point of brain damage, effectively — that's the end of football as we know it." I think we are at that point now, not necessarily where it's the end of football, but where there's a dialogue beginning about whether you want to let your kids play or not.

Fainaru: I think it's a very personal decision, and it's one that I've grappled with myself, with my own son. As I said, the issue of prevalence with this disease is not yet established. There are some very, very ominous signs, obviously. But at the same time, we all know that there are lots of things in life that involve risk, and I personally don't want my son to be making all of his decisions based on fear — particularly for something like football, which I love and which was a really formative experience for me, playing high school football. I think, like a lot of things in parenting, I'll deal with it when I have to and not until then.

Read an excerpt of League Of Denial