Accessibility links
Even Antarctica Feels Effects Of The Government Shutdown Scientists who study the remote, rugged continent at the bottom of the world are on edge as funding for research there remains in jeopardy. It hasn't been decided yet if Antarctic operations for the research season will be allowed to continue. 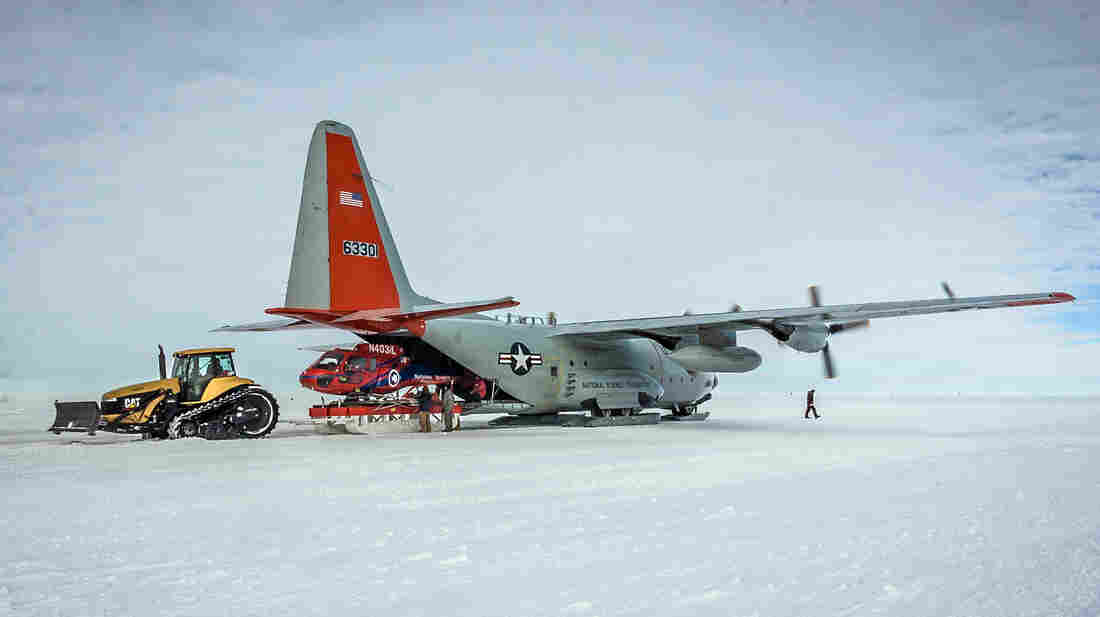 A helicopter is unloaded from an LC-130 in Antarctica last December. Researchers on this mission were studying the Pine Island Glacier, one of the fastest-receding glaciers on the continent. August Allen/National Science Foundation hide caption

It looks like even Antarctica isn't far away enough to avoid getting caught up in the government shutdown.

That's because it's currently springtime there, and scientists who study this remote, rugged continent are poised to take advantage of the few months when there's enough daylight and it's warm enough to work. Advance teams have already started working to get things set up and ready for the researchers, who usually begin heading south right about now.

But they're hearing that the government's contractor for logistics in Antarctica, Lockheed Martin, will run out of funding for its Antarctic support program in about a week. A decision about whether they will need to start pulling back personnel is expected very soon.

The fear is that this year's entire research season will effectively be cancelled — that scientists and logistical support workers will be called back home, and only skeleton crews will be left to keep the three U.S. research stations going.

"Just a week ago, even though we knew about the government shutdown and everything, we weren't really thinking it would impact us and our field season," says Peter Doran, a professor of earth sciences from the University of Illinois at Chicago. "What a difference a week makes. Now it all seems very uncertain."

Doran notes that the U.S. has the largest and most impressive Antarctic program in the world. "I mean, we can do things that other countries can't do because of the great logistic support that we've had for years," he says.

The thought of all the science that wouldn't get done if there is a pullback is depressing to Doran. "And the waste of money is just heartbreaking," he adds. "All the equipment that's been shipped down already for this field season, all the people having to reverse all that — for nothing? It really kind of makes me ill." 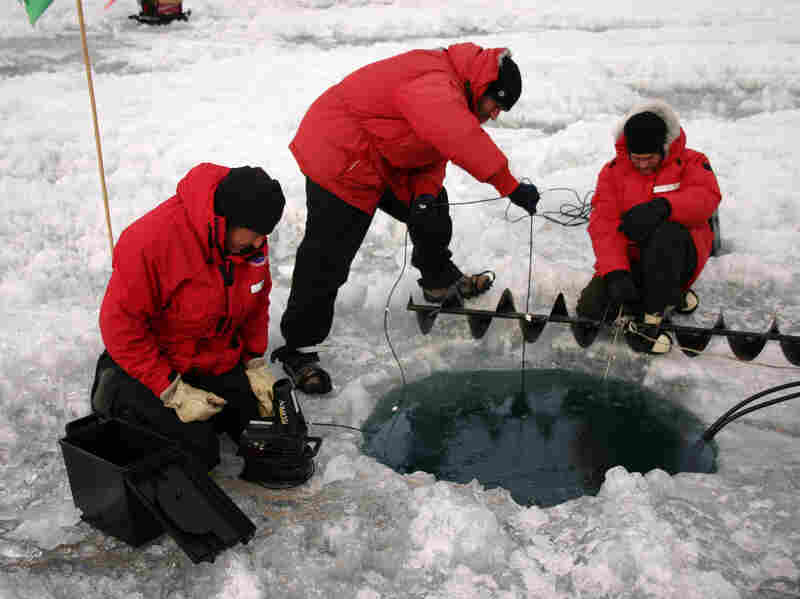 John Priscu, Phil Lee and Mike Lizotte use an underwater camera to check the progress of a hole being melted on Lake Bonney, Antarctica, in 2008. Courtesy of John Priscu/National Science Foundation hide caption 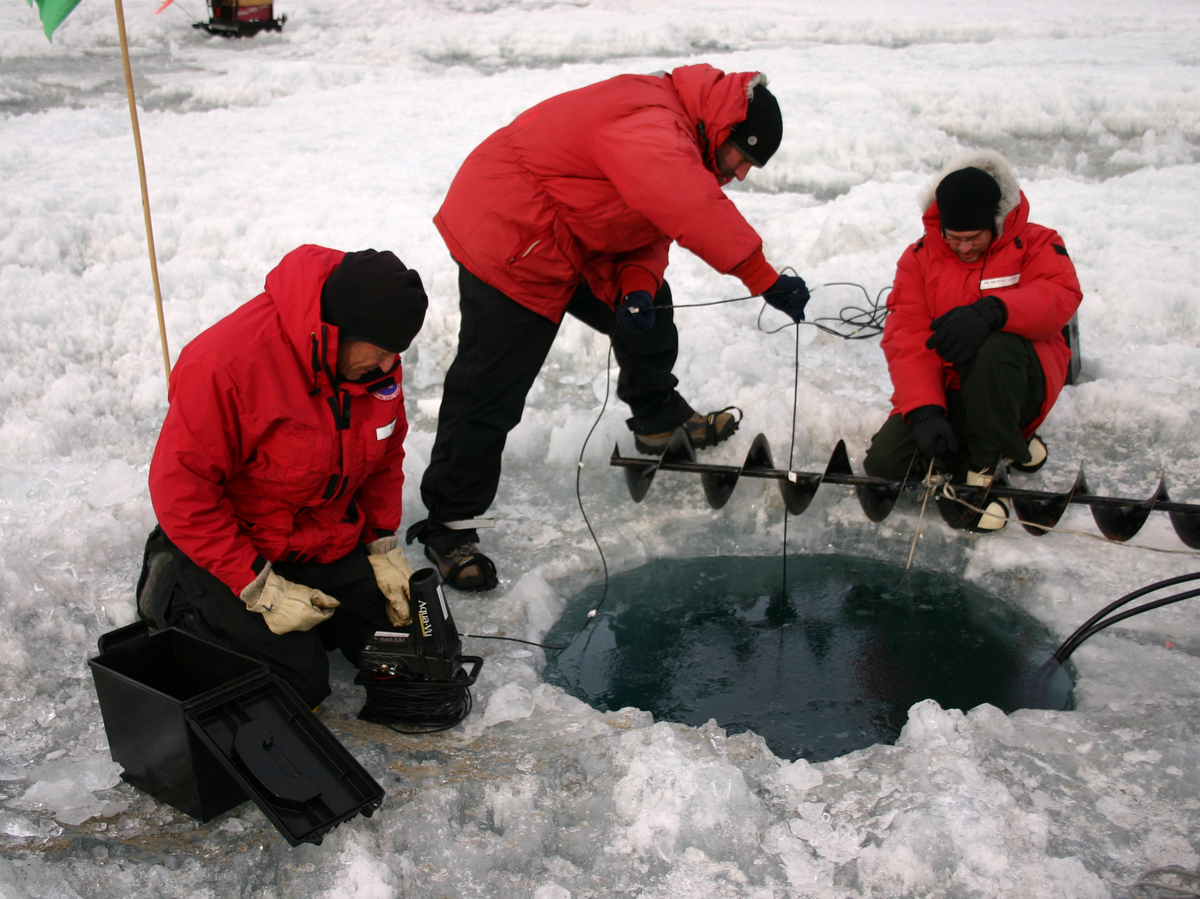 John Priscu, Phil Lee and Mike Lizotte use an underwater camera to check the progress of a hole being melted on Lake Bonney, Antarctica, in 2008.

This isn't the first time Antarctic researchers have faced a government shutdown. But in the past, shutdowns haven't caused problems because they've been resolved fairly quickly. This one could be different, says John Priscu, a Montana State University biologist who has been to Antarctica about 30 times.

He thinks if a decision is made to put the stations on "caretaker" status, it will be hard to reverse that situation quickly.

"In Antarctica the planning is so intense. I mean, we're scheduling Department of Defense aircraft and icebreakers," says Priscu. "The planning goes on years ahead. I don't think you can just throw a switch and say, 'OK, we're better now.' "

He has a team that was supposed to leave in about a week to take measurements for a long-term study of how a large valley is responding to climate change.

"That project has been going for 21 years now. If we have a void in that project, we will have loss in long-term data integrity," Priscu says. "Any prediction we make on climate-based ecosystem change would be equivocal."

The loss of one year might not seem like a big deal, but it really would be, says James McClintock of the University of Alabama at Birmingham, who studies marine biology in Antarctica.

"Those trends that are the basis of arguments for whether people believe or not in things like climate impacts are data points that are pieced together," he says. "Without the data, you can't really make a cogent argument for a given trend."

So far, McClintock has heard nothing definitive from the National Science Foundation (NSF), which funds the U.S. Antarctic Program, or its logistical support group. "I'm just sort of holding out with bated breath that maybe this will blow over," he says. "I certainly hope so." 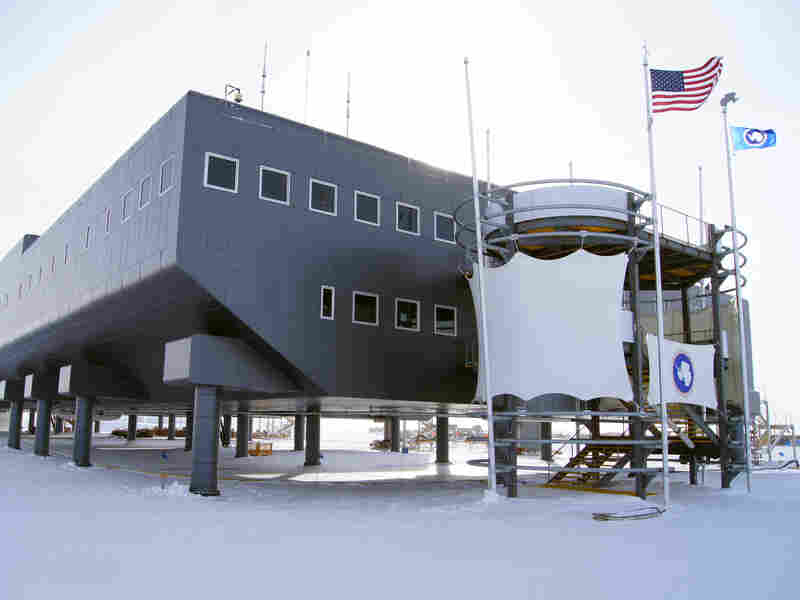 The Amundsen-Scott South Pole Station, a center for scientific research, was designed to allow snow to blow under the building rather than accumulate against it. Elaine Hood/National Science Foundation hide caption 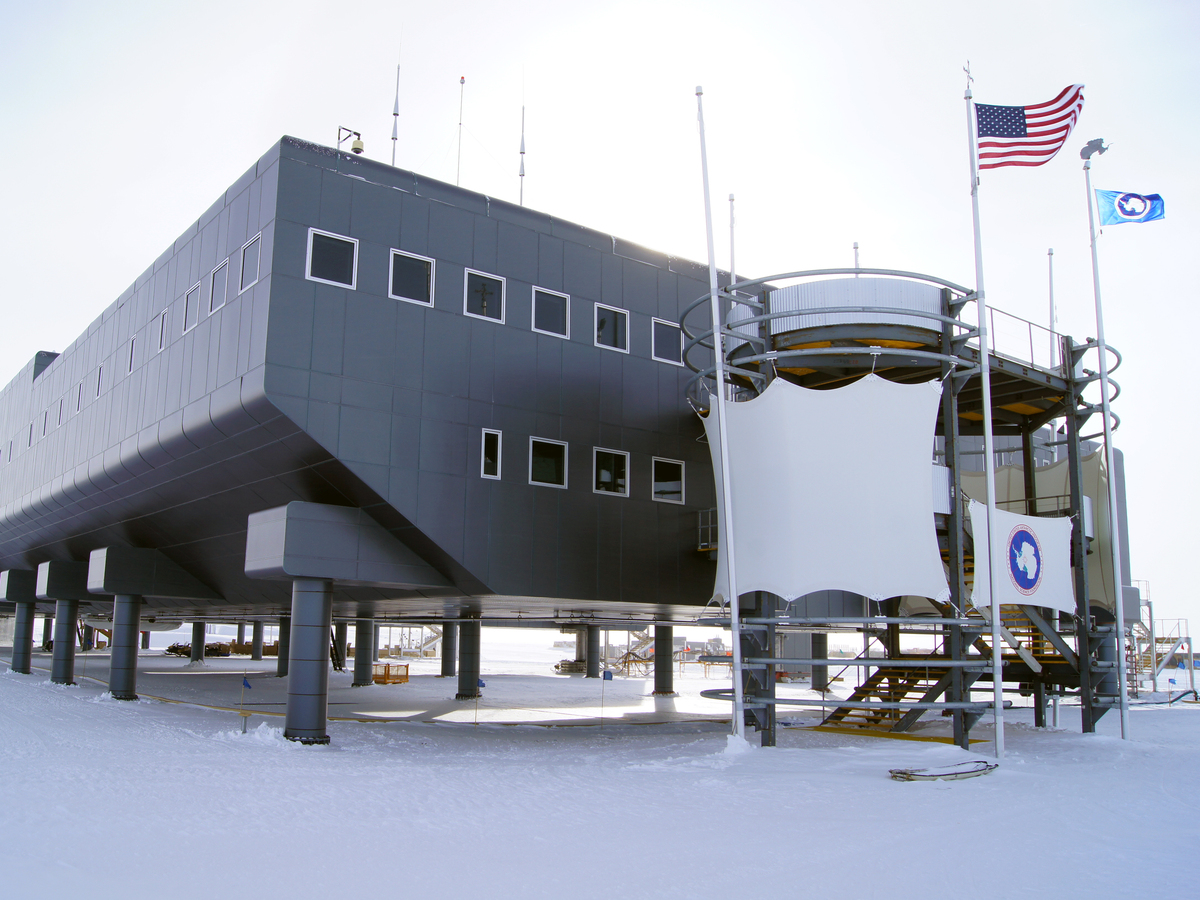 The Amundsen-Scott South Pole Station, a center for scientific research, was designed to allow snow to blow under the building rather than accumulate against it.

A spokesperson for Lockheed Martin referred NPR to the NSF. The NSF, of course, is shut down.

But last week, its U.S. Antarctic Program posted a statement saying that "NSF has a small number of 'excepted' employees who will remain on the job expressly to ensure the safety of personnel and property in the Polar Regions ... at no time will we compromise our ability to access our personnel for safety and continue operations as appropriate. We will continue to house, feed, and provide care for our personnel currently in Antarctica without exception."

One major project that could take a hit if things in Antarctica get pulled back is Operation IceBridge.

Robin Bell, a geophysicist at the Lamont-Doherty Earth Observatory of Columbia University, explains that IceBridge is a state-of-the-art imaging machine carried by an airplane that will allow researchers to "actually get up close and personal to how the ice sheets are changing by flying over them."

Researchers could miss some important changes in the ice sheets if the IceBridge airplane can't take advantage of its narrow flight window this year, says Bell. This year would be the first time the plane would be based in Antarctica, instead of South America, so that it could get to critical parts of the continent and survey them.

What's Bell's biggest nightmare? "My fear is that the government will stay closed so long that all weather windows will close," she says, "and that the Antarctic science wouldn't happen this year."