Accessibility links
Interview: Elizabeth Smart, Author of 'My Story' Smart, who was held captive for nine months at age 14, describes the 2002 ordeal in a new memoir called My Story. She's now an advocate for children's safety education and says "the best punishment" she can give her abusers is to move on with her life and be happy. 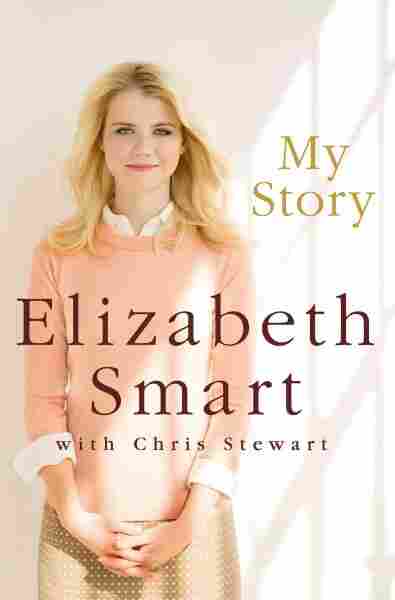 by Elizabeth Smart and Chris Stewart

Elizabeth Smart has the kind of fame no one would want: In the summer of 2002, at the age of 14, she became one of the nation's most famous kidnap victims when she was abducted from her bedroom in Salt Lake City, where she lived with her devout Mormon family.

Her kidnapper, Brian David Mitchell, saw himself as a religious prophet and took her to be his second wife in a polygamous marriage. With a knife at her throat, Mitchell forced her to go with him to his remote camp on a mountain near Salt Lake, where they lived during the first stage of her nine-month captivity.

Smart tells Fresh Air's Terry Gross that Mitchell "knew exactly how to get what he wanted. He was a master at manipulation," she says. Smart was raped by him nearly every day, sometimes several times a day. The only other person in their camp was Mitchell's wife, Wanda Barzee, who treated Smart like her slave. Eight years after the police found Smart and freed her, Mitchell was sentenced to life in prison. Barzee was sentenced to 15 years after reaching a plea deal. (Click here to see a timeline of the abduction and its aftermath.)

As for Smart, she's now married and finishing work on her degree at Brigham Young University. She's the head of the Elizabeth Smart Foundation, which helps prevent crimes against children and educate children about how to protect themselves if they are mistreated by a stranger. Her memoir My Story has just been published.

On the way her kidnappers used religion to justify their behavior

My parents have raised me to believe in a kind and a loving God, and someone who cares about me, who is always there for me, and who would never wish harm or illness or any kind of tragedy upon me. And then here this man and this woman are telling me that actually God has ordained them to do this, and that they have been called to kidnap young girls and that I should be grateful, I should be thankful for what's happening to me.

Hear Smart Read From Her Memoir

On the remote camp where Mitchell brought her

It's not far from my home, but it is not an easy climb. ... It is extremely difficult to get there; there are so many trees and close-growing bushes, and you are climbing up a very, very steep incline. ... It's not a walk in the park. ...

I wasn't so much afraid of the mountains ... but I was afraid of him, and I felt the further I got away from my home and my family, the less chance I would have of escaping, the less chance I would have of getting away. Although it may seem for those people who have never been there, [it] may not seem like it's that far away, to me, it felt like an eternity just because it was such a long hike. ... And this man, he seemed to have planned for everything. When I got to the camp, I didn't come to just a tent thrown up in the middle of the woods. No, it was very well laid out; it was very well-stocked; it was very well-prepared. He had cables running from one end of the camp to the other, which he chained me up to. 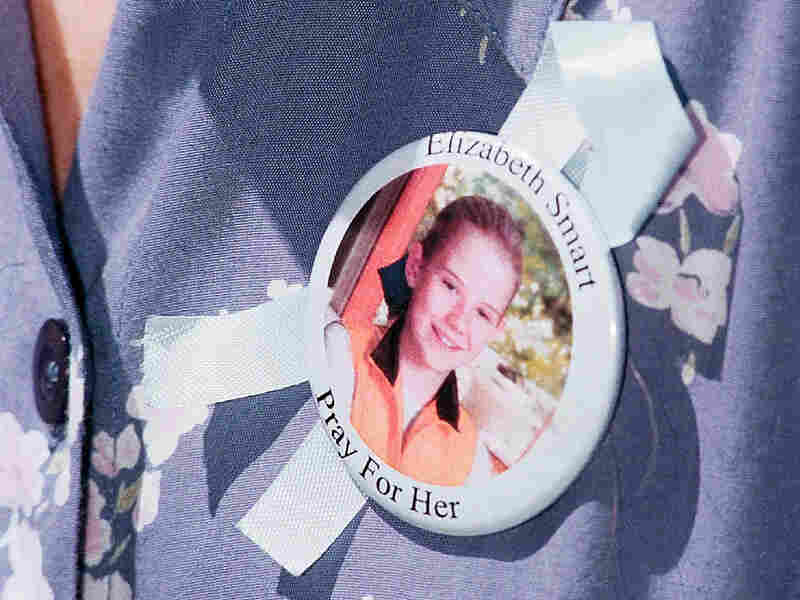 Elizabeth Smart's aunt, Cynthia Smart-Owens, wears a button of her niece during a news conference in June 2002, days after Smart had been abducted. Mauricio Menjivar/Getty Images hide caption 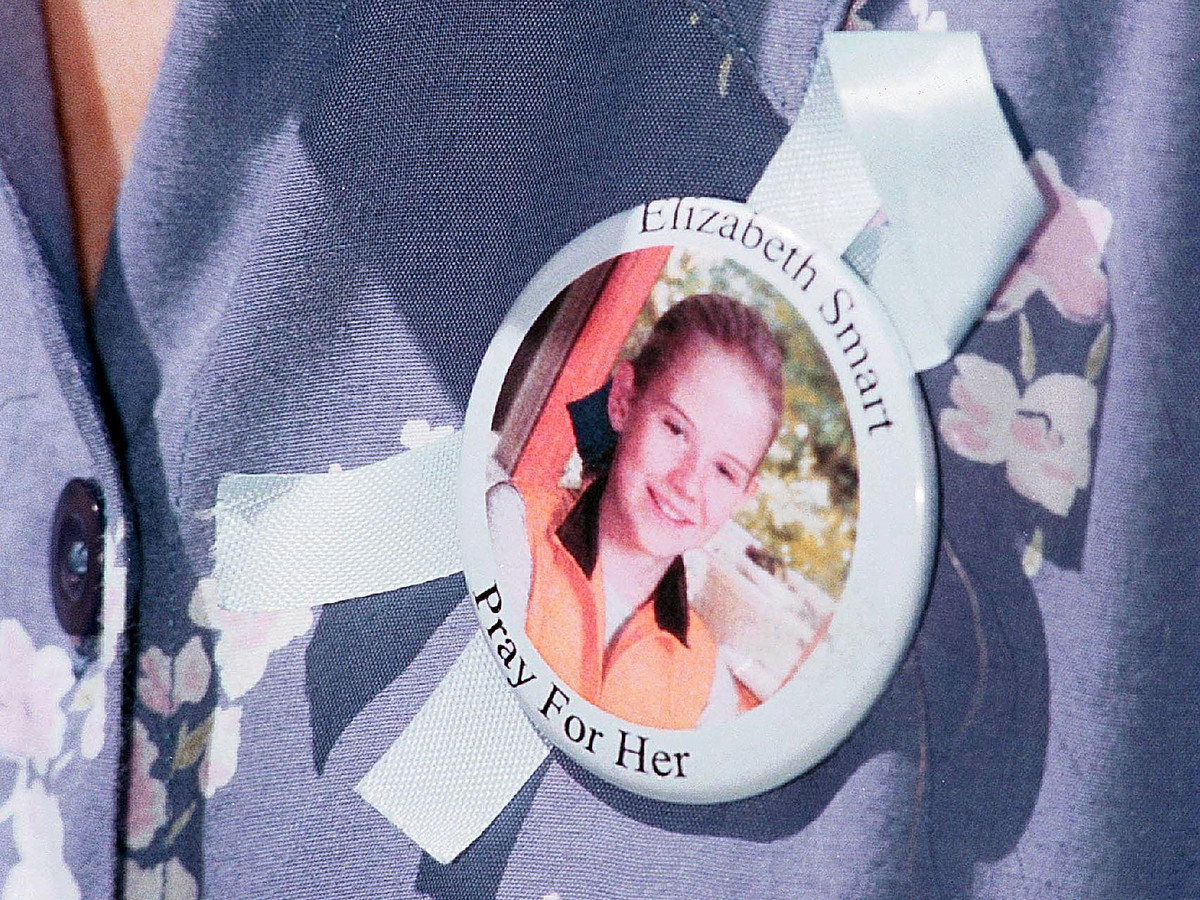 Elizabeth Smart's aunt, Cynthia Smart-Owens, wears a button of her niece during a news conference in June 2002, days after Smart had been abducted.

On Wanda Barzee's relationships with Smart and with Mitchell

She felt jealous [of me]; I mean, that's what all of their fights were about, and they fought all the time. But at the same time, that's what she wanted. These weren't just his choices — they were her choices, too. I mean, she knew [that] what she was doing was wrong, but she was still OK with it. So, yes, she was mistreated, but she didn't have to be; that was her choice. For her to sit by and watch what happened to me and not do anything, not say anything, she had passed the point of feeling sympathy or feeling anything for anyone else but herself.

That was right after 9/11 had happened. ... It was at a time when, even more so than now, that religion was a very hot topic, and there were so many people from different religions that were being mistreated because of how they looked or because some extremist group did something terrible. It was a hard time. And by looking a certain way, Mitchell found that people were a bit more standoffish, that they didn't want to get too close. It was really just another way of manipulating people around him, getting them to stay away, getting them to want to avoid us. It was not uncommon for us to walk down a street and there'd be people walking towards us, then they'd stop, cross the street, walk around us, and then cross the street again and come back to the same side they were on, because they didn't want to pass us that close on the street. 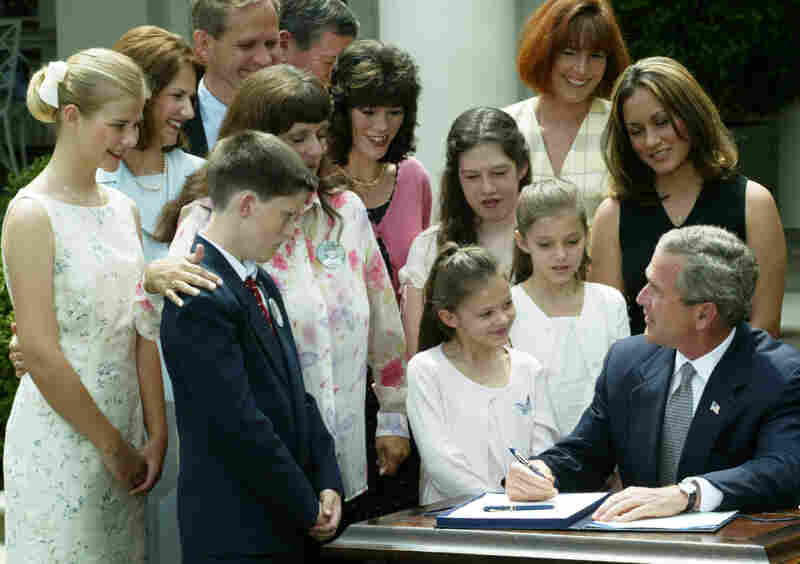 Smart (far left) and other formerly kidnapped children and their families gather around President George W. Bush as he signs the Amber Alert package into law at the White House in April 2003. Alex Wong/Getty Images hide caption 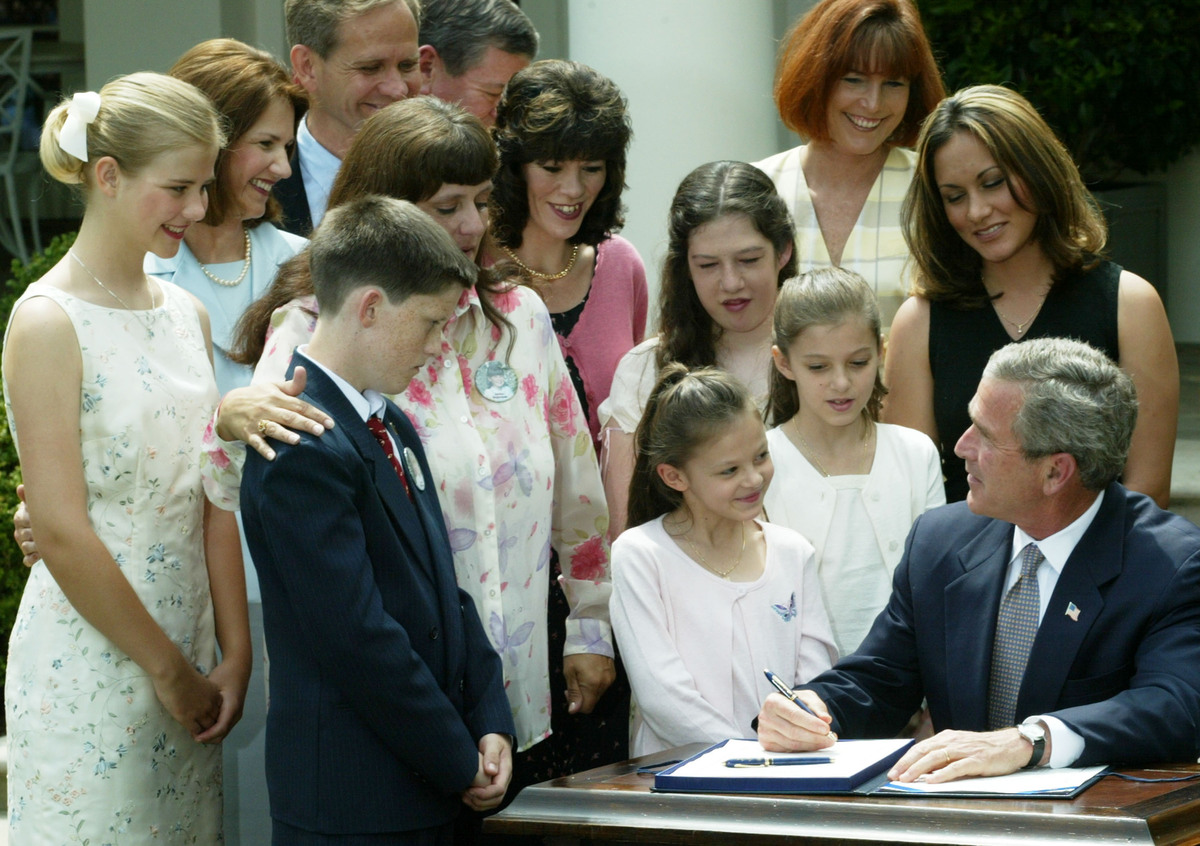 Smart (far left) and other formerly kidnapped children and their families gather around President George W. Bush as he signs the Amber Alert package into law at the White House in April 2003.

On the best advice her mother gave her

The morning after I was rescued my mom gave me the best advice I've ever been given. ... My mom said to me, "Elizabeth, what this man has done to you, it's terrible, there aren't words strong enough to describe how wicked and evil he is. He has stolen nine months of your life from you that you will never get back. But the best punishment you could ever give him is to be happy, is to move forward with your life and to do exactly what you want to do. ... The best thing you can do is move forward because by feeling sorry for yourself and holding on to what's happened, that's only allowing him more power and more control over your life, and he doesn't deserve another second. So be happy." ... I'm not perfect at following her advice ... but I do try to follow it every day.

On the RAD (Resist Aggression Defensively) Kids program, which is supported by the Elizabeth Smart Foundation

RADKids is based on three simple principles ... The first principle is that you're special and nobody has the right to hurt you. The second principle is because you're special, you don't have the right to hurt anybody else unless — and I say this with a big unless, unless someone is hurting you, and then you can do whatever it takes to get away, whatever it takes to be safe, to escape from whatever situation you're in. Then, by all means, do whatever it takes — bite, scream, kick, yell, whatever. The third principle, which is most important, in my opinion, is that if something happens, it's not your fault and that you can tell ... not only you can but you should tell.

Read an excerpt of My Story