Accessibility links
Phase 2 Of BP Trial Focuses On Amount Of Spilled Oil Both the U.S. government and BP have estimates on just how much oil spilled into the Gulf of Mexico after the Deepwater Horizon explosion in 2010. The problem: They reached two different numbers. At stake is up to $18 billion in fines and penalties under federal environmental laws. 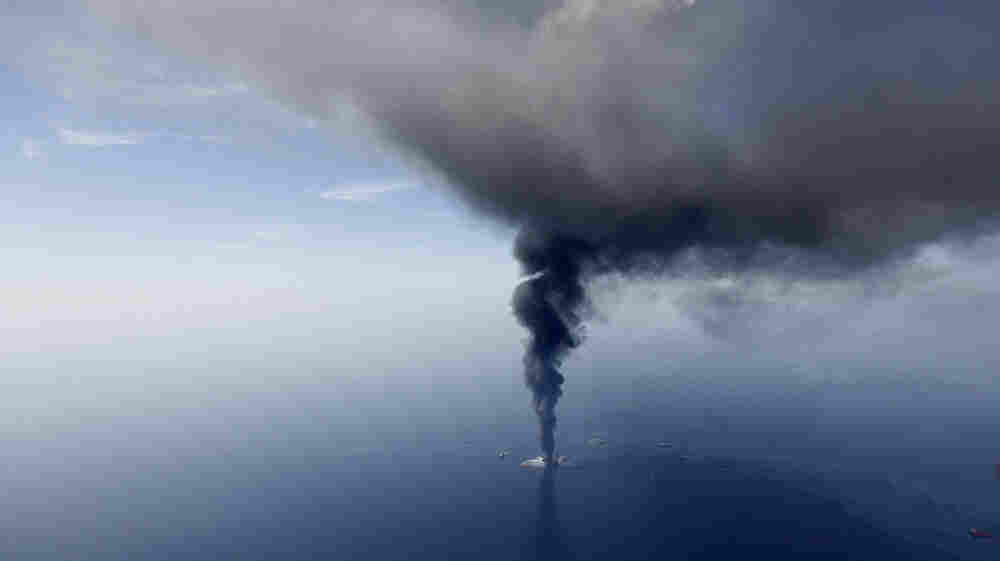 The Deepwater Horizon oil rig is seen burning in the Gulf of Mexico in April 2010. A second phase of the BP trial, which started this week, looks at just how much oil spilled into the Gulf. Gerald Herbert/AP hide caption 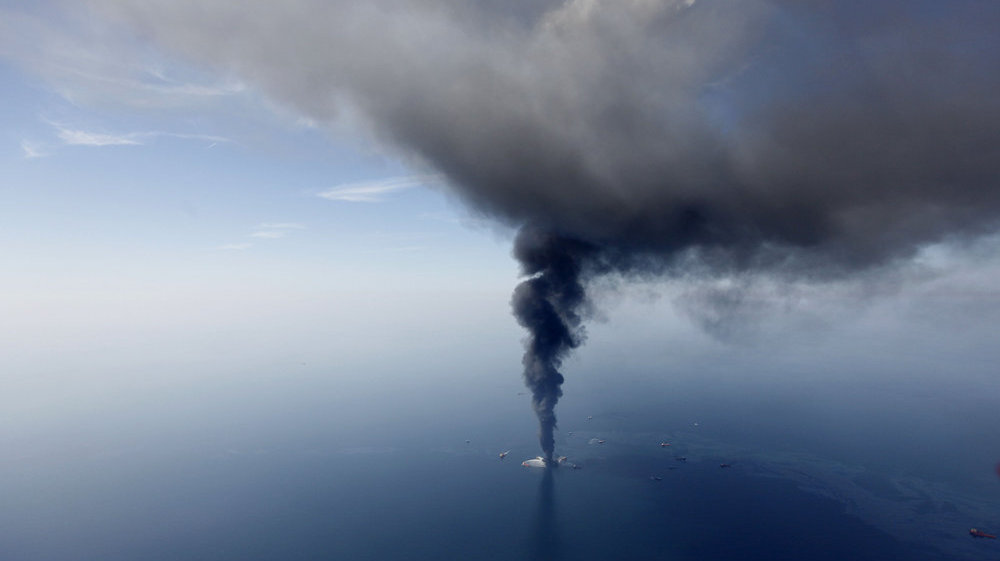 The Deepwater Horizon oil rig is seen burning in the Gulf of Mexico in April 2010. A second phase of the BP trial, which started this week, looks at just how much oil spilled into the Gulf.

In a New Orleans courtroom this week, BP and the federal government are arguing over how much oil gushed into the Gulf of Mexico after the Deepwater Horizon explosion in 2010.

Oil flowed from the out-of-control well for nearly three months. Just how much oil spilled will be key in determining the amount BP will have to pay in federal fines and penalties. 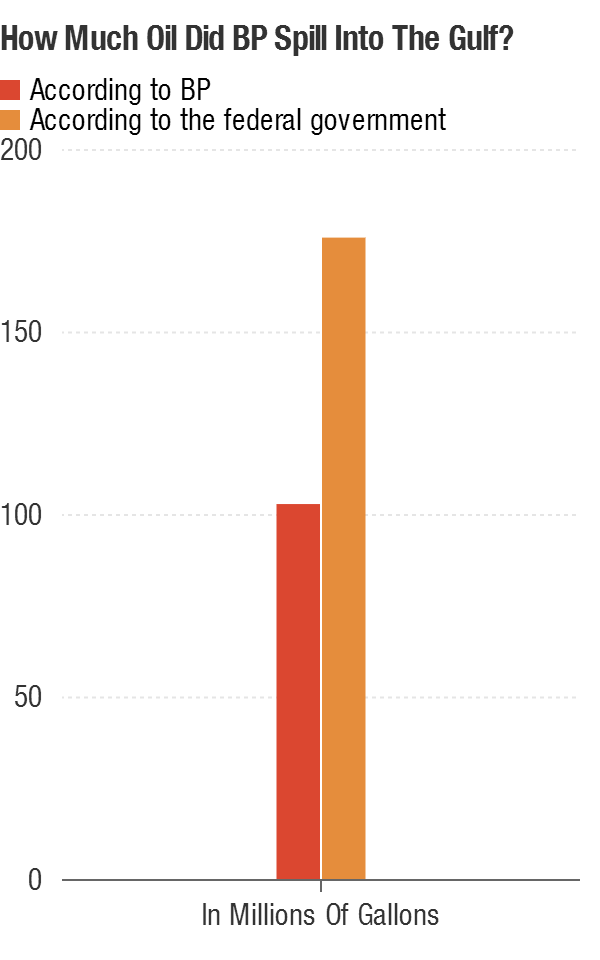 Attorneys for both the U.S. government and BP told a federal judge in opening statements Monday that they have estimates for how much oil spilled into the Gulf after the accident, but their numbers are different. The government says it was about 176 million gallons; BP says it was closer to 103 million.

"I think the damage is in the billions of dollars so I think the penalties and reparations should reflect that," said Doug Meffert, executive director of Audubon Louisiana.

Speaking outside the courthouse, Meffert said he hopes the judge decides the higher government numbers are more accurate. He said damage from the spill is still occurring. Every time there's a storm, he said, more tar balls show up on beaches. It doesn't even have to be a strong storm.

"Tropical Storm Karen completely missed Louisiana — it skirted Grand Isle — and we had tar balls coming up on Grand Isle this weekend as well," he said.

A BP spokesman said it will be a few days before tests show if the tar balls are from its well. In any case, BP said, it remains committed to its ongoing cleanup work.

Department of Justice attorney Steve O'Rourke told the court the amount of oil that flowed from BP's well was the equivalent of 16 Exxon Valdez oil spills. He previewed the work government scientists have done to arrive at their estimate; it shows that oil began flowing at one rate and then slowed over time.

BP Ends Oil Spill Cleanup In Gulf, Except For Louisiana

But BP lawyer Mike Brock said the oil company's models show the opposite, that the flow started slower and then increased. He said the government reached a spill estimate before all the information was in, but the government said BP was cherry-picking data to arrive at a lower number.

Over the next three weeks, U.S. District Judge Carl Barbier will listen to the evidence in detail. At stake are up to $18 billion in fines and penalties under federal environmental laws. Ed Sherman, a Tulane Law School professor, says Barbier has some discretion.

"That $18 billion upper limit doesn't mean that he has to award it," Sherman said. "He can consider the negligence of other parties, the difficulties that they encountered and so forth."

Sherman said this trial is probably one of the most complex in legal history and that Barbier was smart to divide it into segments. An earlier phase explored the initial explosion and who was at fault.

Even after the weeks and weeks of testimony already heard, the parties could still reach a settlement.

"You never know what might happen in a case like this," said Montre Carodine, a professor at the University of Alabama School of Law. "We may get to the very end and there may be a settlement, and ultimately we may never hear Judge Barbier's determination."

This second phase of the trial is scheduled to continue through Oct. 24.