Accessibility links
Virtual Strangers: A 'Journey' With Anna Journey is a game that's been widely praised for its beauty and stunning gameplay. But an evening wandering through it with a complete stranger reveals that it also has the ability to reveal tremendous goodwill with no distractions.

Virtual Strangers: A 'Journey' With Anna

Virtual Strangers: A 'Journey' With Anna 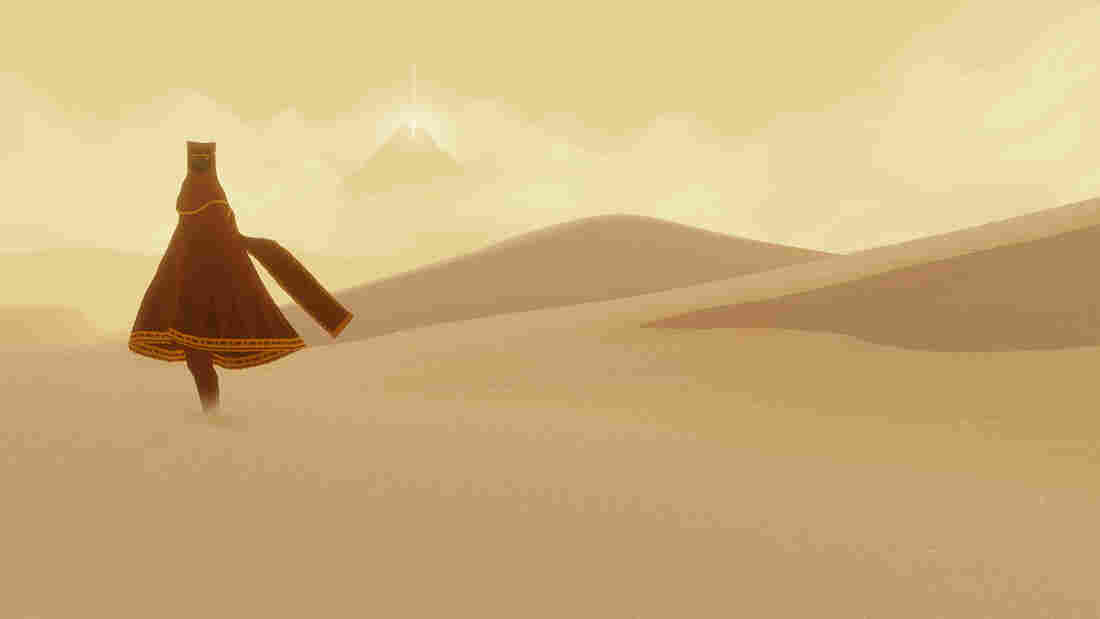 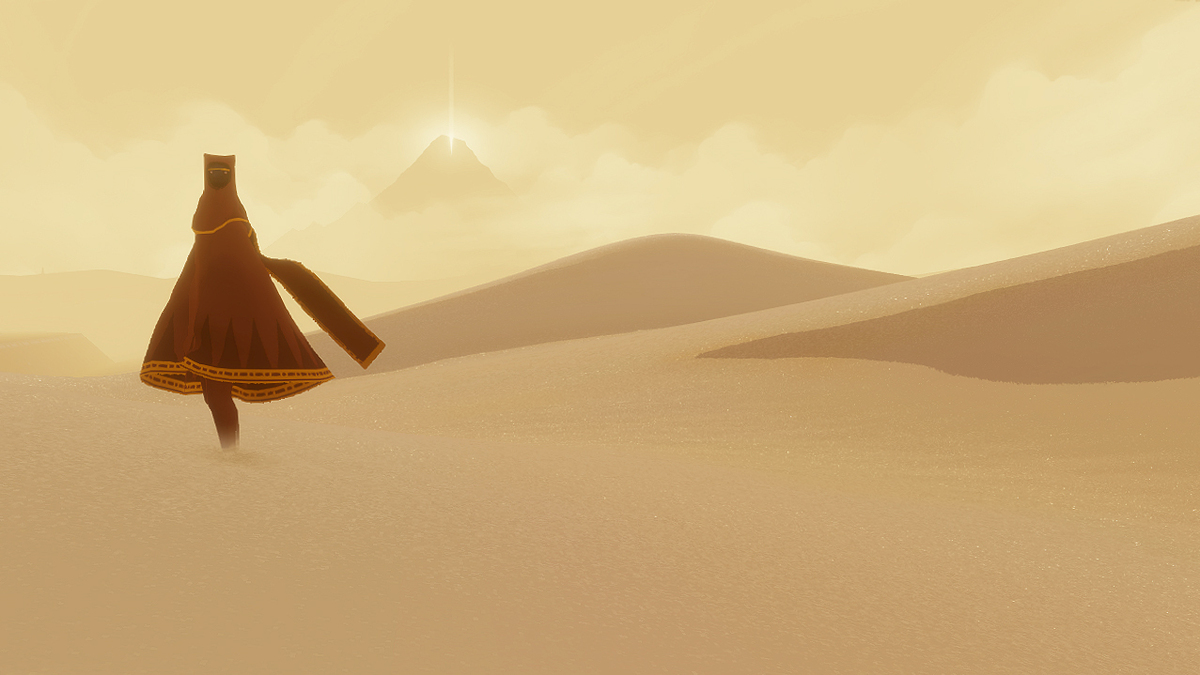 A screenshot from Journey.

Not long ago, when I got a PlayStation 3, the recommendations started rolling in: play this, play that, play my favorite game.

But a bunch of people said, with a sort of excited urgency — particularly people who know me — "Play Journey."

Journey is a PS3 exclusive from a game company called, yes, Thatgamecompany. It's won a bunch of awards from a bunch of different places — its music was even nominated for a Grammy for Best Score Soundtrack for Visual Media, where it competed with the scores of The Girl With The Dragon Tattoo, The Adventures Of Tintin, The Artist, The Dark Knight Rises, and Hugo.

Here's how the company describes it: "Journey is an interactive parable, an anonymous online adventure to experience a person's life passage and their intersections with others." As beautiful as the game is, that is not a description that excels in the area of specificity.

The basics are these: You appear on the screen in the form of a hooded and caped figure (I'd be lying if I denied that there was something nice about appearing in the form of what looked to me like a woman), alone in the desert. There's a mountain in the distance. That's where you're going. If you follow your nose, you wind up with a scarf that flaps behind you that can be charged up to give you flight.

And you just start traveling. Those dunes, those dunes ... you can walk on the sand, but when you're going downhill, you slide like a skier, leaving a little trail, making a ffffffft noise with your feet, flapping your cape. You skim the ground, you float, you leap. You trudge up a dune and peek over, then push past and slide again, steering between rock formations, ffffffffft, ffffffft, for long stretches. It is as close to understanding what being physically graceful would feel like as a not-so-graceful person is likely to get. (I ... well, I hypothesize.) 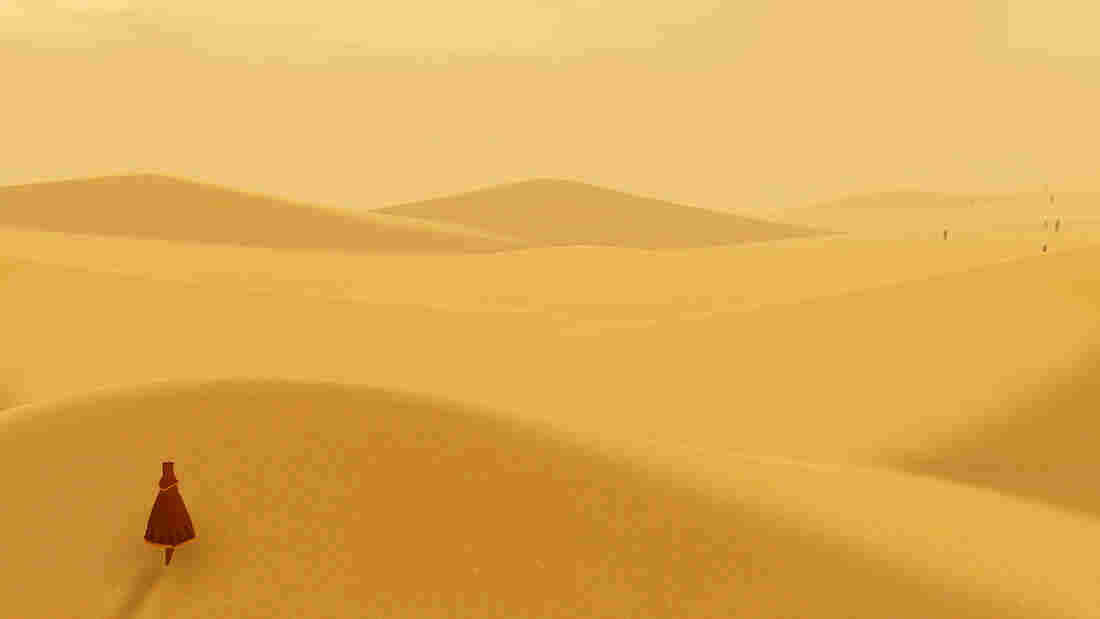 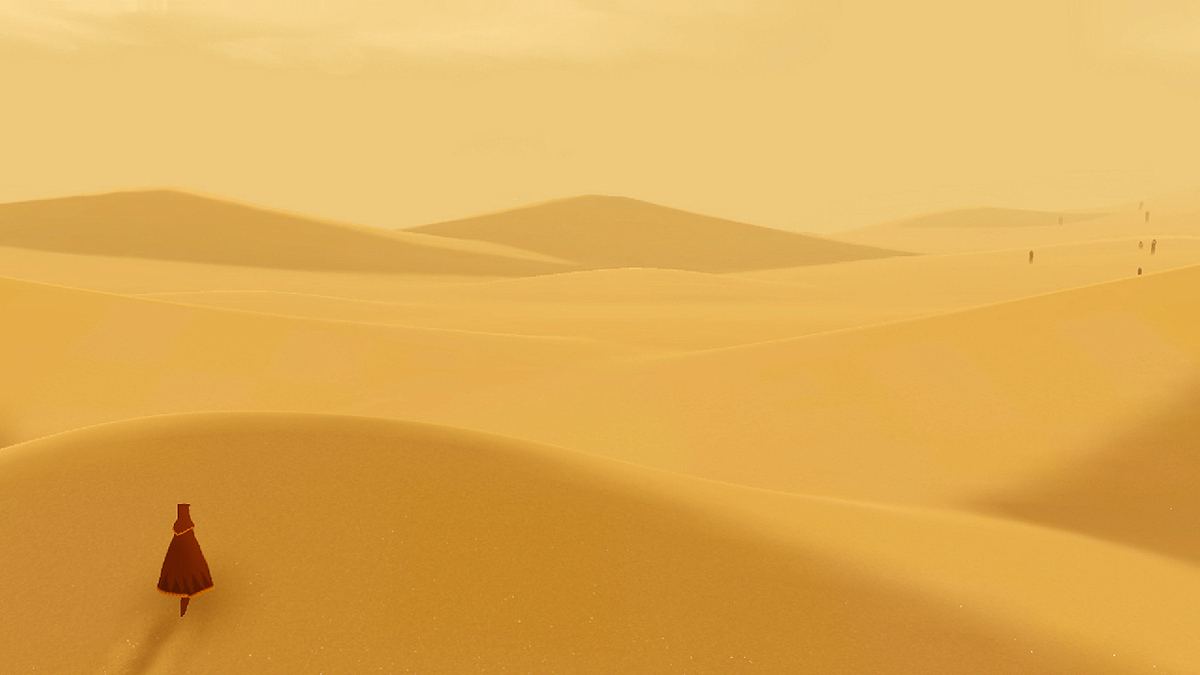 But one thing that distinguishes Journey is that you run into other hooded figures being played by other real people. For me, this was the part of gaming I had decided would wait a long, long, long time, because I associated it with nightmarish-sounding stories about getting yelled at in a headset because you couldn't load the gun fast enough. Or getting yelled at because your name sounded like a woman, or getting yelled at for any number of other reasons, and frankly, if I wanted to get yelled at, I'd roll down the window and drive slowly in the left lane. I knew I didn't know what I was doing yet; I didn't need anybody to be mad.

But Tuesday night, once I was done with the opening chapter and made it into the next piece of the story, I headed up a dune, and I saw her — another person who looked just like me, except with a longer scarf, which I assumed meant she was much better at this than I was, since your scarf grows in length as you collect pieces.

There are some advantages to traveling together: you can charge up each other's scarves, for one thing, so you can fly. But for me, it was an advantage that she seemed to know what she was doing and where she was going, and I didn't. I was very sure — the me sitting in my living room — that she would very quickly get sick of me — the me who could barely fly. I figured she'd wander off rather than drag my sad novice self around the desert. I wouldn't have blamed her.

I immediately named her "Anna," for no particular reason, despite the fact that she could have been, in reality, a 45-year-old male banker or an 11-year-old boy. In my favorite fantasy, she's a 14-year-old nerd girl who will one day be a game designer and loved Pitch Perfect. I can imagine these things; the desert isn't the only thing that's subject to interpretation. 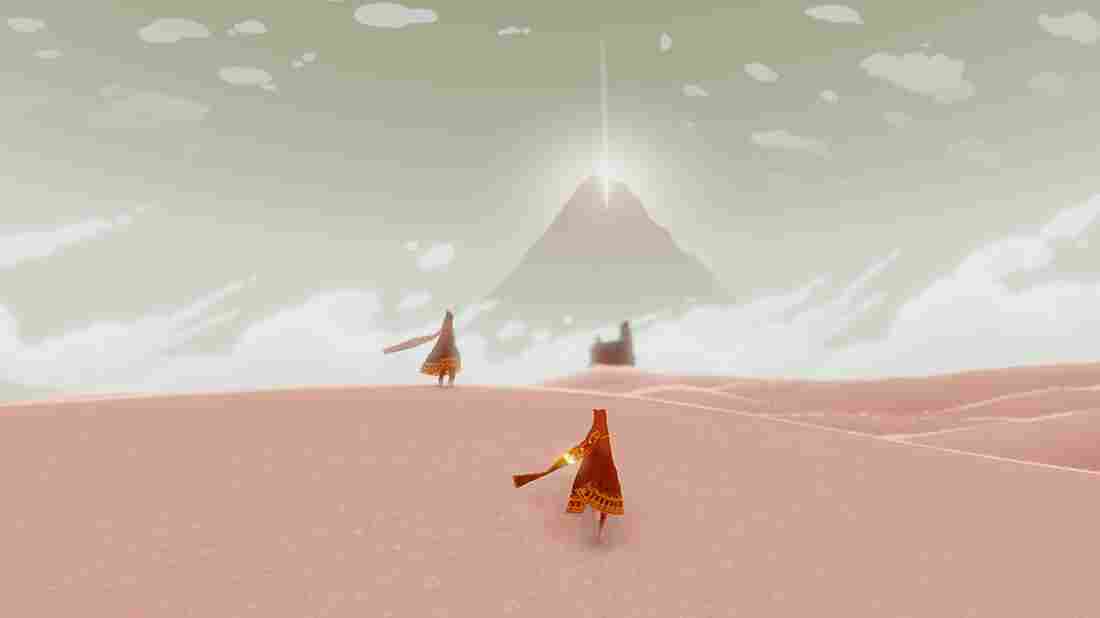 A Journey screenshot. (This is not me and Anna. But it was just like this!) thatgamecompany hide caption 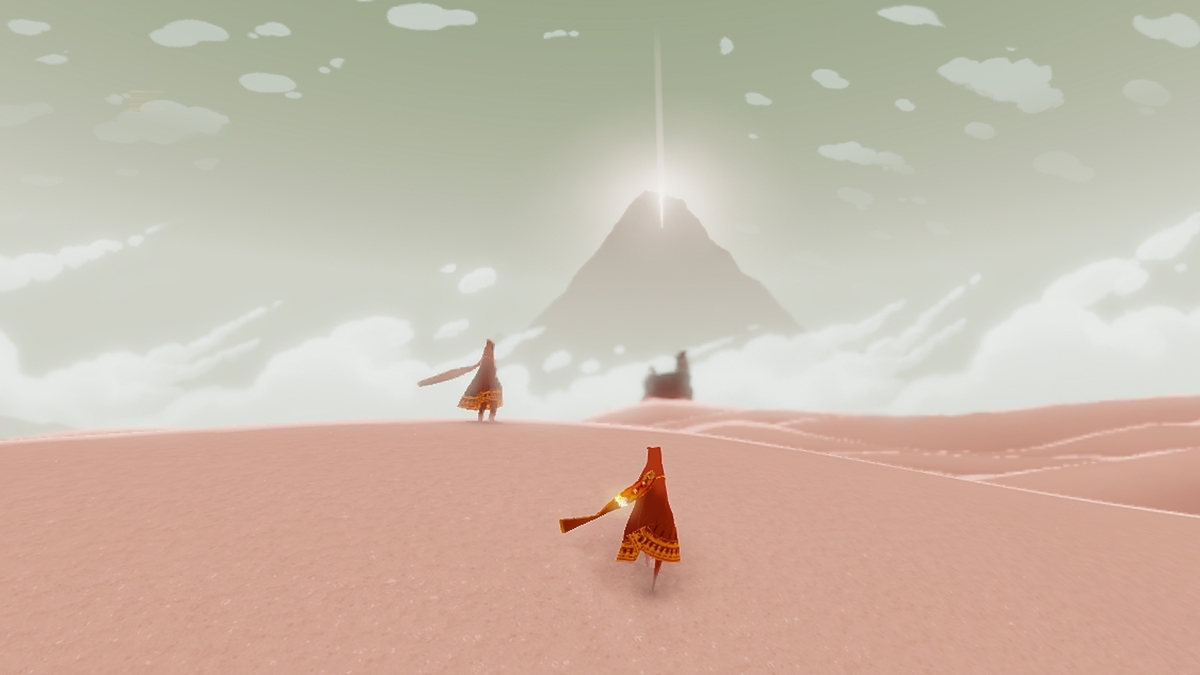 A Journey screenshot. (This is not me and Anna. But it was just like this!)

We could communicate only through pressing the button that makes you go, "BING!" That's all it does. "BING!" Sometimes it does it in different tones. But it's always that: "BING!" So I said, "BING!" and Anna said, "BING!" We climbed up a dune together, and before long, we were scooting through rosy pink sand, side by side.

And the strangest thing happened: I had this little swell of happiness. Now I wasn't doing everything by trial-and-mostly-error. Now we were on a trip, and even though we could only say "BING!", we had clearly decided to travel together for a bit. I still figured I'd fall behind before long, but for the moment, it felt ... a little joyful.

We found ourselves at a tower. I'm no genius scarf-wise, but I knew we wanted to get up to the top of that tower. I flew, but I couldn't get up high enough. Anna flew straight to the top. "Well," I thought, "That was fun. I'll go back to being a loner. HAVE A GOOD TRIP, ANNA!"

And then she flitted back down. She landed next to me and charged up my scarf again. She headed back up and disappeared. I flew up again. I fell. She came back to get me. Again.

This went on for a while. She probably rescued me three or four times, until I finally figured out how to get to the top. I experienced for the first time the negative part of not being able to say anything except "BING!" Because I couldn't tell her, "Thank you." I couldn't tell her, "That was really nice of you; as you can tell, I have no idea what I'm doing." We just went on.

But the real test was The Wall. We were trying to get over this wall, and I just could not figure out the right combination of things to do in the right order, and she kept flying over the wall, and I kept crashing into it and sliding down and landing with a soft puff! in the sand. I would think I was ready; I would think I was going to make it this time, and then I wouldn't, again. I felt terrible, because she kept flying over and then coming back. I would say "BING!" meaning "I'm sorry I'm sorry," but I think she just read "BING!" as "HELP!", and she kept coming back.

If there had been a button for "GO ON! SAVE YOURSELF!" I'd have pressed it, several times. I even wandered in the wrong direction briefly, trying to get her to go on without me, because I felt so bad. But then I'd see the little glow that meant that somewhere, she was BING!ing at me. And I'd go back to the wall, and she'd still be there.

We went through this again, after I'd gotten over the wall, when we encountered a sort of high structure you had to walk across that I, for some reason, kept falling off of. Just walking, I would fall off and have to fly all the way back up again.

She floated back down. "BING!" She flew back up. I flew back up, and this time, I got it. Later, when we encountered something scary, she went "BING!" and I went "BING!", and I'm pretty sure they were both profanities.

We played for a while longer, but eventually, I had to quit; I knew I didn't have enough time to finish. I was hesitant to go, though, because again, limited communication meant I couldn't say, "This was so fun, but I have to leave." I could only, you know, "BING!" at her, and she'd probably just think I wanted more help. Again.

But then at almost exactly 9:00 p.m., she vanished. My theory is that she went off to watch New Girl.

This experience, this delicate little connection with strangers, is one of the things people like about this game; it's hardly revolutionary to have experienced it. But it was revolutionary to me, as a novice — it was hard to think of another situation in which I was likely to encounter such utterly blank goodwill from another person. No visual cues, no race, no age, no gender, no body to be an advantage or disadvantage, no class, no avatar, not even a screen name to separate a "marjorie316" from a "kickbuttgamer."

It was disembodied, completely decontextualized kindness and help.

So thanks, Anna. BING BING.