Accessibility links
One Thing Obama Can Do: Decide The Fate Of The Keystone Pipeline The president alone can approve or reject construction of the Keystone XL pipeline, which is designed to take crude oil extracted from Alberta, Canada, through America's heartland to refineries on the Gulf Coast. New Yorker journalist Ryan Lizza says Obama could use the decision as a "symbolic turning point in the kind of energy future he wants America to have." 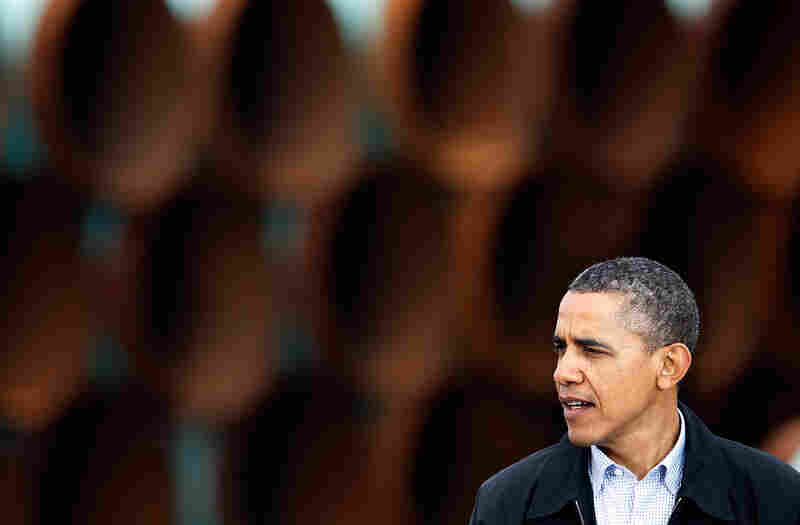 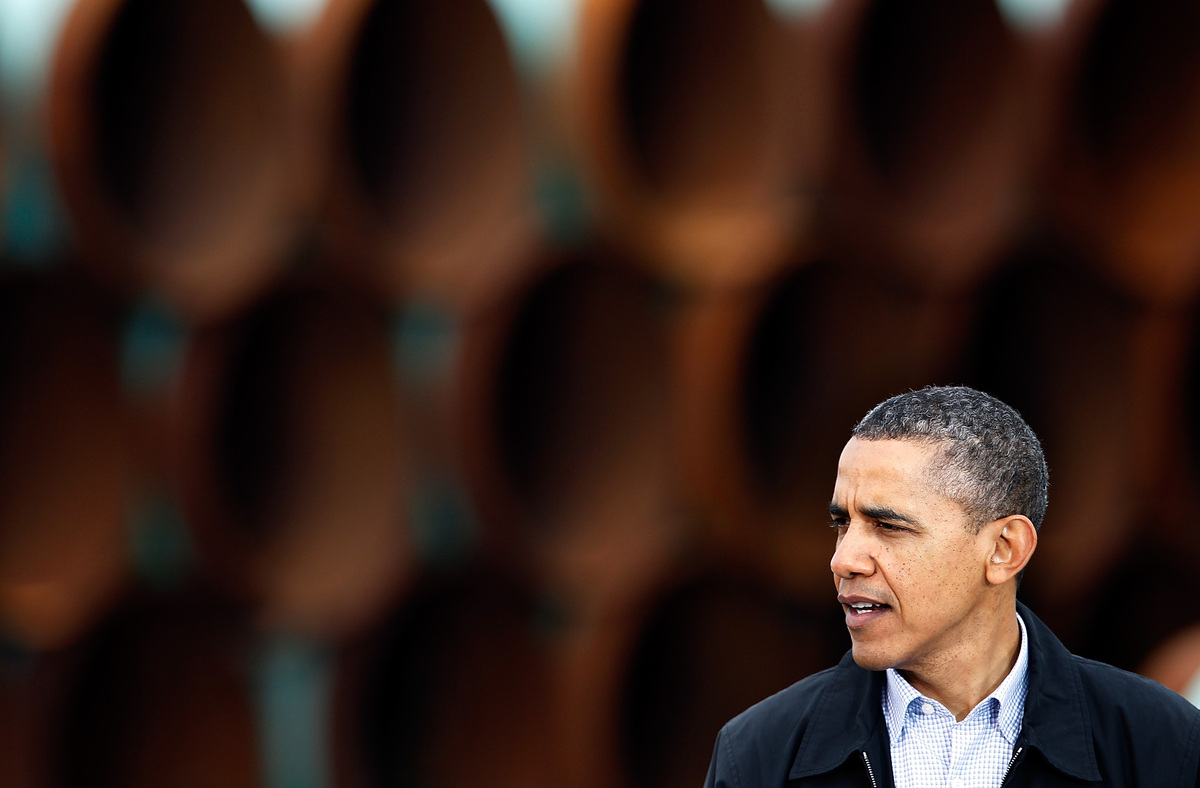 President Obama speaks at the southern site of the Keystone XL pipeline in Cushing, Okla., in March 2012.

Journalist Ryan Lizza says there's one far-reaching, controversial issue President Obama will soon get to decide all by himself, without having to ask Congress. He alone can approve or reject construction of the Keystone XL pipeline, designed to take heavy crude oil extracted from Alberta, Canada, through America's heartland to refineries on the Gulf Coast.

The President And The Pipeline: The Campaign To Make The Keystone XL The Test Of Obama's Resolve On Climate Change

The oil here isn't conventional oil, Lizza tells Fresh Air's Dave Davies: "It's not really oil at all, it's oil sand — it's basically a mixture of oil, sand, water and some other clay deposits, and to extract that oil from this asphaltlike mixture, it requires a lot of energy."

Many environmentalists believe that blocking the Keystone pipeline is critical to addressing climate change. They worry that extracting, refining, selling and burning this oil will result in so much greenhouse gas in the atmosphere that it will dramatically change the climate to the point of no return.

Meanwhile, proponents say it will make an important contribution to energy independence. In a recent piece in the New Yorker Lizza explores the argument that the pipeline will have a major environmental impact and profiles a billionaire former hedge fund owner who has thrown himself in the battle to stop Keystone XL.

They basically have two methods for getting [the oil]: In places where it's close to the surface, they can essentially strip mine it. ... About 20 percent of this massive area in Northern Alberta they can strip mine.

The other 80 percent — the oil sand — is deep below the ground. And it's covered by a capstone — basically rock. ... [Extracting that oil is] an even more energy-intensive process than the mining. You're emitting a lot of greenhouse gases in the process, and so the reason it's so controversial is that a lot of smart climate scientists have pointed out that if we start exploiting all of the world's unconventional oil, we're not going to be able to solve the climate change problem. 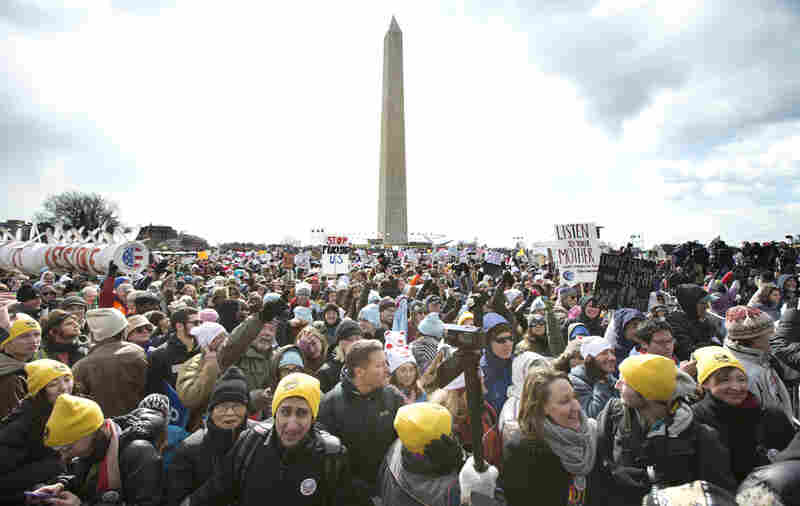 Thousands of protesters gather on the National Mall in Washington in February 2013 calling on President Obama to reject the Keystone XL oil pipeline from Canada and act to limit carbon pollution from power plants. Manuel Balce Ceneta/AP hide caption 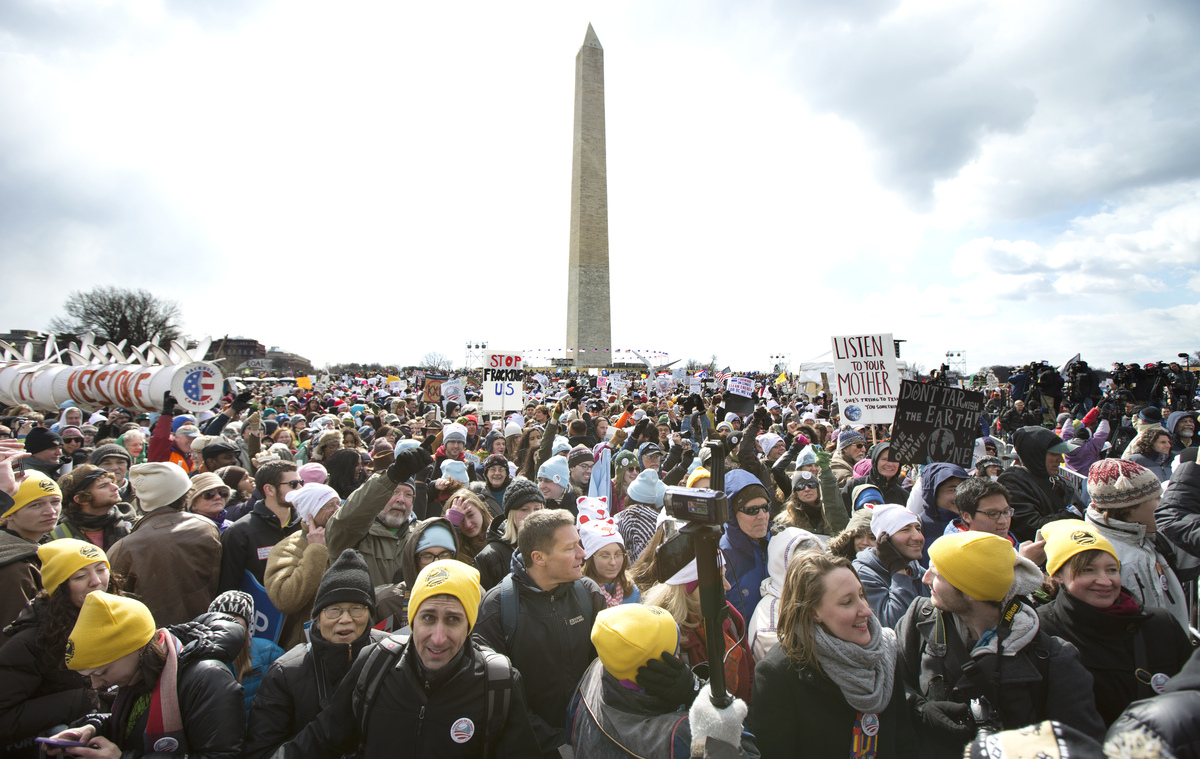 Thousands of protesters gather on the National Mall in Washington in February 2013 calling on President Obama to reject the Keystone XL oil pipeline from Canada and act to limit carbon pollution from power plants.

It's really that it's stickier [than conventional oil]. When it's at room temperature this stuff has the consistency of almost peanut butter, [and oil producers] have to heat it up to get it to flow. They have to mix it with another substance to get it to actually flow through the pipeline. This is why industry and government calls this stuff "oil sand" and a lot of activists call it "tar sand." The reason it got the name "tar sand" is it does look like a tarlike substance. It's not as viscous as conventional oil, unless you add chemicals to it or heat it up. So when it spills, it just sort of creates this tarry mess that is much more difficult to sop up than traditional oil.

On how the Keystone pipeline became a galvanizing issue for environmentalists

In the elections of 2010 the Republicans took over the House of Representatives, and the mood in Washington, especially with the still-struggling economy, became very, very hostile to doing anything that looked like putting a price on carbon. Obama himself stopped talking about it, so I think a lot of environmentalists were searching for a galvanizing issue that would both bring activists together but also seize the attention of the public, and I think that's really why Keystone became such a big deal at that moment.

There's a debate among environmentalists of whether it was the right move. There are plenty of environmentalists who think that the most important thing they should be doing is demanding very aggressive EPA regulations on power plants and that would have a far bigger effect on reducing greenhouse emissions than stopping this pipeline. But the pipeline sort of took on a life of its own when there wasn't much else going on about climate change.

Just How Many Jobs Would The Keystone Pipeline Create?

On the Canadian energy industry

Calgary is a city built on this resource. Calgary is like a classic boom town; all of the skyscrapers in Calgary are named after the energy companies that are extracting the oil from the oil sands, or the banks that are funding them. There are construction cranes all over. And Canada ... is defining itself as an energy superpower. I think it surprises a lot of people to hear they have the third-largest oil reserve in the world, behind Venezuela and Saudi Arabia.

What you find in Calgary, in Canada, is a lot of industry officials scratching their heads and not really understanding why they have become the face of climate change for the environmental community. ... The big thing they're trying to do now after dealing with the campaign against Keystone and the campaign against extracting oil from the oil sands — they're spending a lot of time both for real and, frankly, for PR purposes, trying to reduce the amount of carbon that is emitted in extracting this oil from the ground. Now some people might look at that and say, "That's like trying to get someone to lose weight by going from Big Macs to Quarter Pounders with Cheese; the whole point is to stop taking it out of the ground." ... Environmentalists look at this and they think it's mostly PR. 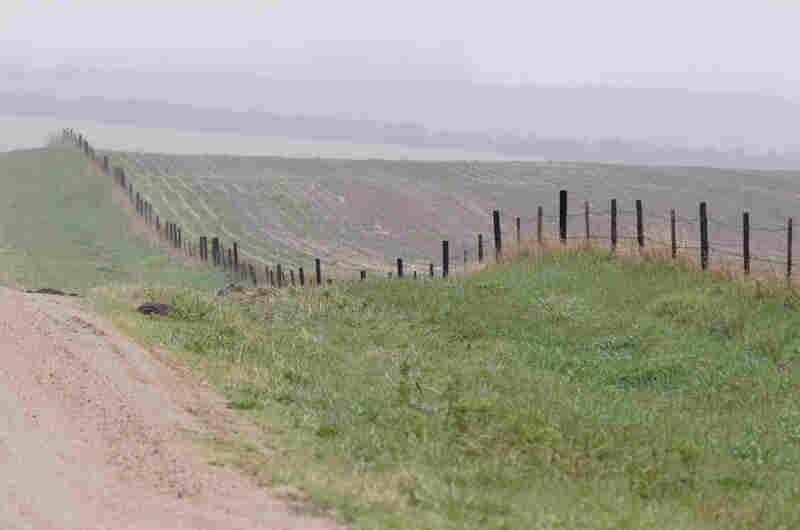 A road near the proposed route for the Keystone XL pipeline several miles north of Neligh, Neb. After its original route through the Nebraska sand hills was blocked, Calgary-based TransCanada submitted to Nebraska environmental officials a preferred alternative route that runs north of Neligh. Nati Harnik/AP hide caption 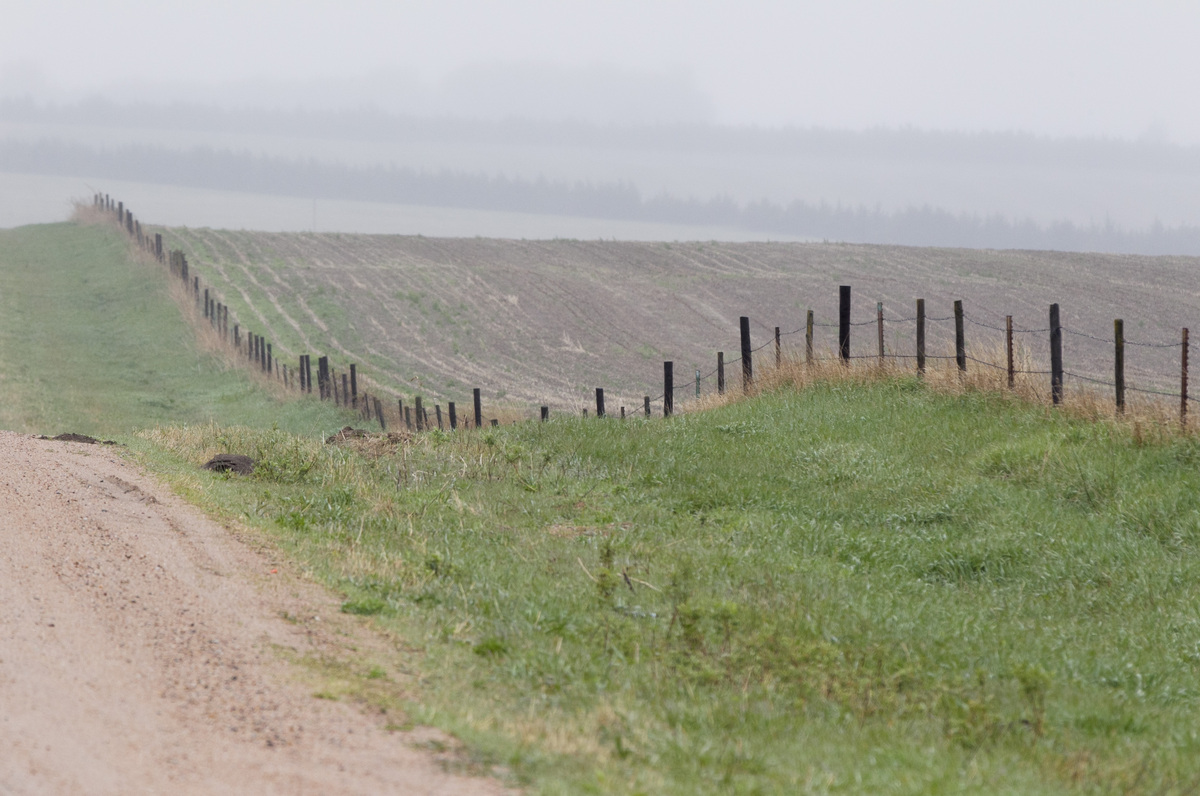 A road near the proposed route for the Keystone XL pipeline several miles north of Neligh, Neb. After its original route through the Nebraska sand hills was blocked, Calgary-based TransCanada submitted to Nebraska environmental officials a preferred alternative route that runs north of Neligh.

The central finding in the draft environmental impact statement ... was, if you don't build Keystone, the Canadians will sell this stuff anyway, they'll build pipelines to their east coast, to their west coast, and they'll send it to the Gulf of Mexico via rail — and by the way, sending oil by rail releases a whole lot more greenhouse gas emissions than putting it in a pipeline. So that became really the most controversial finding of the State Department's report. ...

The process requires that other government agencies weigh in on whether the State Department got this right or not. The EPA quickly challenged that market analysis and said, "You know what? We're not convinced that the State Department got this right. We don't think they're looking at the latest information and the latest data and we're not so sure that it's true that this oil will get to market absent the Keystone pipeline." And that was a big moment for the EPA, a very gutsy moment.

On what Keystone could mean for Obama

Barack Obama gave a very important speech on his second-term climate change priorities, and at the very last moment he inserted some language into that speech about how he would settle this issue of the Keystone pipeline. And he said for him, he doesn't want to see that pipeline approved if it would significantly contribute to an increase in greenhouse gas emissions. So how the State Department settles that question is what everyone has their eye on. ...

More On The Keystone XL Pipeline

I think there's an important moment here for Barack Obama if he chooses to take it — even if he thinks that denying the permit to build Keystone won't have a huge impact on greenhouse gas emissions — he could use it as a symbolic turning point in the kind of energy future he wants America to have. That is, he might say, "At some point we have to move away from fossil fuels and I'm using this moment to lead a crusade in America to move away from fossil fuels."

On how this is something Obama can do without congressional support

As we sit here in October of 2013, immigration reform seems dead, gun control legislation is dead, and the government is shut down with no grand bargain in sight. So a lot of environmentalists say, "Why not concentrate on the things you can do unilaterally?" And one of those things you can do unilaterally is address climate change, both on the regulatory side with the EPA but also by killing this Keystone project. So in this complicated calculation about whether to approve this pipeline or not, you have to think that perhaps that will enter into Obama's thinking and that he realizes as his domestic agenda that requires congressional approval withers, maybe it makes some sense to concentrate and act on the things he can do on his own.