Accessibility links
Alice Munro, 'Master' Of The Short Story, Wins Literature Nobel Munro's short-story collections include Dance of the Happy Shades, The Moons of Jupiter and, most recently, Dear Life. The author, who has been writing for more than 60 years, is only the 13th woman to win the prize. 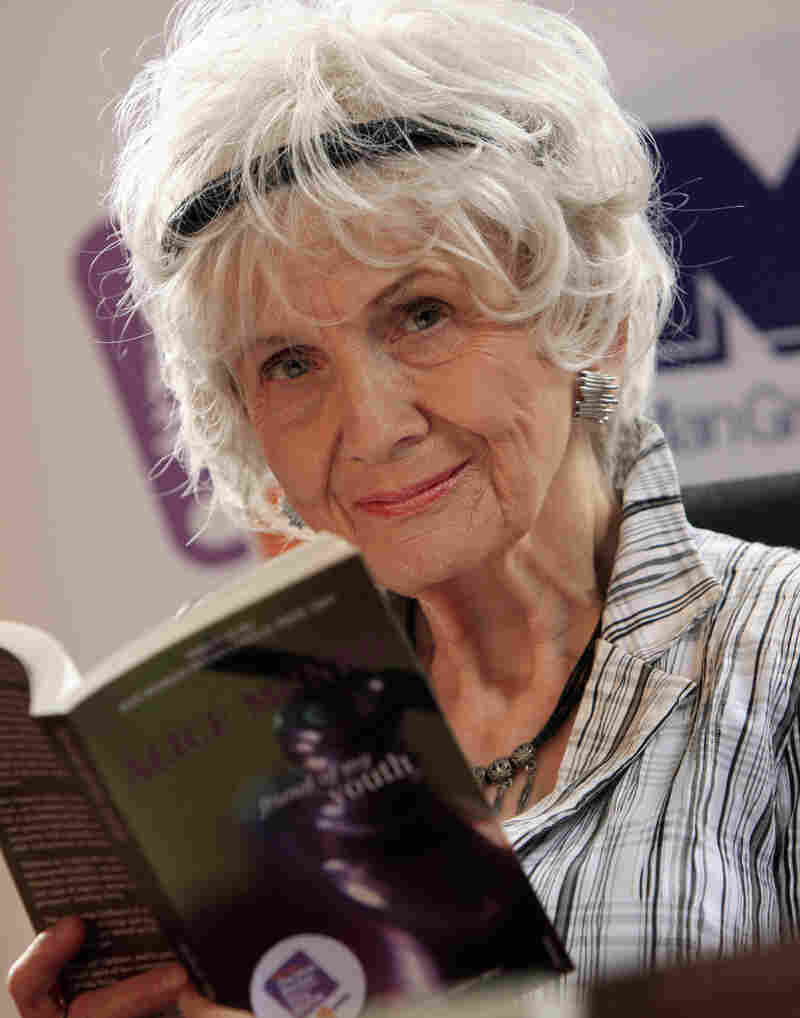 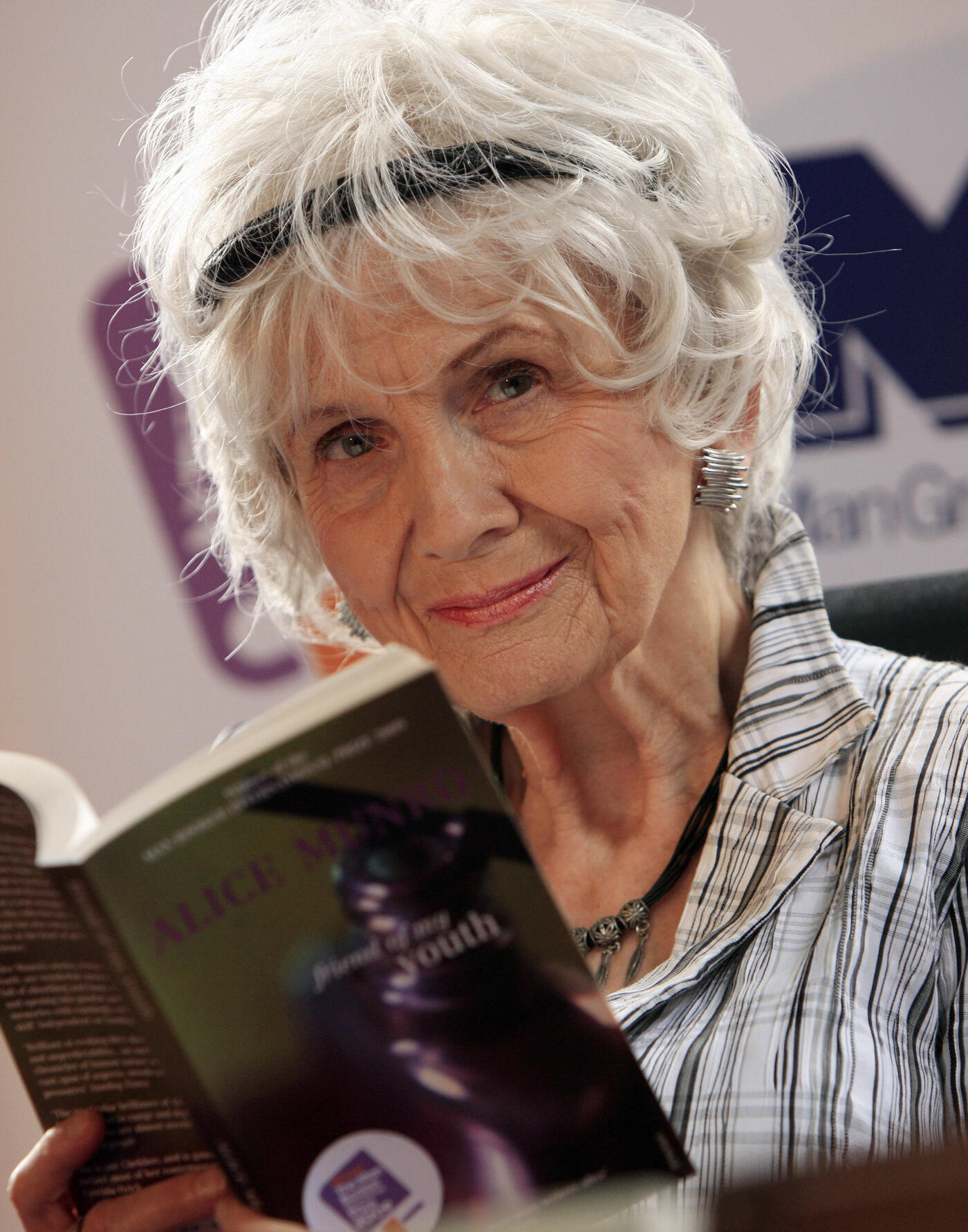 Canadian author Alice Munro has won the Nobel Prize in literature. The 82-year-old author recently announced that she plans to stop writing.

Alice Munro has been awarded the Nobel Prize in literature, the Swedish Academy announced Thursday morning. The academy often explains its decision — what it calls the "prize motivation" — with lush precision; recent winners have been praised for their "hallucinatory realism," "condensed, translucent images" and "sensual ecstasy." But for Munro, the committee came straight to the point: They called her simply "master of the contemporary short story."

Munro has been writing short stories for more than 60 years, though she was first published in 1968. Her collections include Dance of the Happy Shades, The View From Castle Rock, The Moons of Jupiter, and most recently, Dear Life. Over the course of her career, she has won the Man Booker International Prize, the National Book Critics Circle Award for fiction, and Canada's Governor General's Award for fiction — three times.

But even after this long list of accolades, Munro told Canada's CBC that the Nobel came as a surprise. "I didn't think about it, you know ... I had many family things to do," she said, in a groggy early-morning phone call. "So I didn't know about it until quite recently. And then, of course, it just seemed one of those pipe dreams that it might happen ... but it probably wouldn't. I'm very surprised and delighted."

She said in a statement from her publisher that she is "amazed, and very grateful." She added, "I'm particularly glad that winning this award will please so many Canadians. I'm happy, too, that this will bring more attention to Canadian writing." She's only the second Canadian-born author to win the Nobel Prize in literature; the first, Saul Bellow, was a naturalized American who spent most of his life in the U.S.

In addition to Canadians, short-story writers (and enthusiasts) might welcome Munro's win with delight. In a literary culture that tends to lionize novels over shorter fiction, Munro has been a constant advocate for the power of the short story. In her interview with the CBC, Munro emphasized the significance of her win not for herself, but for her art form: "I really hope that this would make people see the short story as an important art," she said, "not just something that you played around with until you got a novel written."

Munro's own short stories have long been met with enthusiastic praise. The Man Booker judges called her work "practically perfect" in 2009, and NPR's Alan Cheuse has written that "she now seems as much an institution as any living writer." A Munro story, Cheuse says, "gives us so much life within the bounds of a single tale that it nourishes us almost as much as a novel does."

On NPR's Morning Edition, Lynn Neary praised Munro's ability to use a few words to sketch an entire character: "In a really short space of time, she can provide a fully realized story that provides remarkable insight into human beings, their shortcomings, their complexities, their loves, their lives."

Munro Weighs The Twists And Turns Of This 'Dear Life'

No Such Thing As 'Too Much' Alice Munro

Many of the stories in her 14 collections take place in rural Canada, and the central character is often a woman — usually well-educated, Neary says, and often bumping against the confines of her life. And while Munro's stories share similar settings, they pull vast themes out of that territory. The Nobel committee noted that the Canadian author's "texts often feature depictions of everyday but decisive events, epiphanies of a kind, that illuminate the surrounding story and let existential questions appear in a flash of lightning." And the academy's permanent secretary, Peter Englund, lauded Munro's focus on a Canadian landscape of small towns: "She's really a broad author — but I think she has everything she needs in this small patch of earth."

Munro was raised in rural Western Ontario by a family of tough Scottish Presbyterians, Neda Ulaby reports for NPR's All Things Considered. Munro's first short story was published when she was 37, a college dropout squeezing in writing time around her children's naps. By the time she was in her 60s, Munro had become one of the most celebrated short-story writers in the world.

Still, as a woman of her generation, she felt conflicted about taking time she needed to do her work, telling WHYY's Fresh Air in 1996: "There tends not to be the feeling that this is what you deserve. I still find it hard to think that I deserve this time — to this day. I can be made to feel guilty if a friend phones just to chat ... Also just about all the things that I could be doing to be a better homemaker, as I was trained to be."

Many of Munro's stories, Ulaby notes, are autobiographical, and while they might be dark at times, Munro hates for her work to be called "bleak." She told Fresh Air that she finds a range of emotions even in sicknesses or betrayals: "Anything that surprises me, that makes me see anything differently, that gives me a gift is entertaining."

Normally adroit at expressing complex emotions, Munro was at a rare loss for words when the CBC asked her what it meant to have won the Nobel Prize. "It just seems impossible — I can't describe it," she said. "More than I can say."

In "Too Much Happiness," a short story in her collection of the same name, Munro wrote about the sometimes-hollow victory of achieving a great prize. Sophia Kovalevsky, a character based on a Russian mathematician from the 19th century, wins a prominent mathematical award, but finds that even after such renown, her gender marks her as a freak rather than a heroine — and her acclaim ruins her relationship:

"The Bordin Prize was what spoiled them. So Sophia believed. She herself was taken in by it at first, dazzled by all the chandeliers and champagne. The compliments quite dizzying, the marvelling and the hand kissing spread thick ... she was an utter novelty, a delightful freak, the woman of mathematical gifts and female timidity, quite charming, yet with a mind most unconventionally furnished, under her curls."

Munro is famous for her modesty, and it's hard to picture her dazzled by chandeliers. But while a female Nobel Prize winner is not an "utter novelty," it is still a noteworthy achievement; Munro is only the 13th woman to win the award.

Munro, who is 82, recently announced that she will likely give up writing: "Not that I didn't love writing, but I think you do get to a stage where you sort of think about your life in a different way. And perhaps, when you're my age, you don't wish to be alone as much as a writer has to be."

Not that I didn't love writing, but I think you do get to a stage where you sort of think about your life in a different way. And perhaps, when you're my age, you don't wish to be alone as much as a writer has to be.

The CBC asked her, in their 4 a.m. interview, if her Nobel win alters that decision. "No, I don't think so," Munro said. "I am getting rather old." Later in the day, however, in an interview with NobelPrize.org's Adam Smith, Munro indicated a possible shift: "This may change my mind," she said.

Her fans might welcome new works, but Englund noted Thursday that if Munro does indeed stop writing, it's OK: "What she's done is quite enough."

Read an excerpt of Dear Life

Read an excerpt of Too Much Happiness

Read an excerpt of The View from Castle Rock