Accessibility links
On 'Sesame Street,' The Sweet Sounds Of Another Thoroughfare The children's show is increasingly turning to renowned Broadway composers for many of its original songs. Lin-Manuel Miranda (In the Heights), Jason Robert Brown (Parade) and Tom Kitt (Next to Normal) are just some of those who've contributed.

On 'Sesame Street,' The Sweet Sounds Of Another Thoroughfare

On 'Sesame Street,' The Sweet Sounds Of Another Thoroughfare 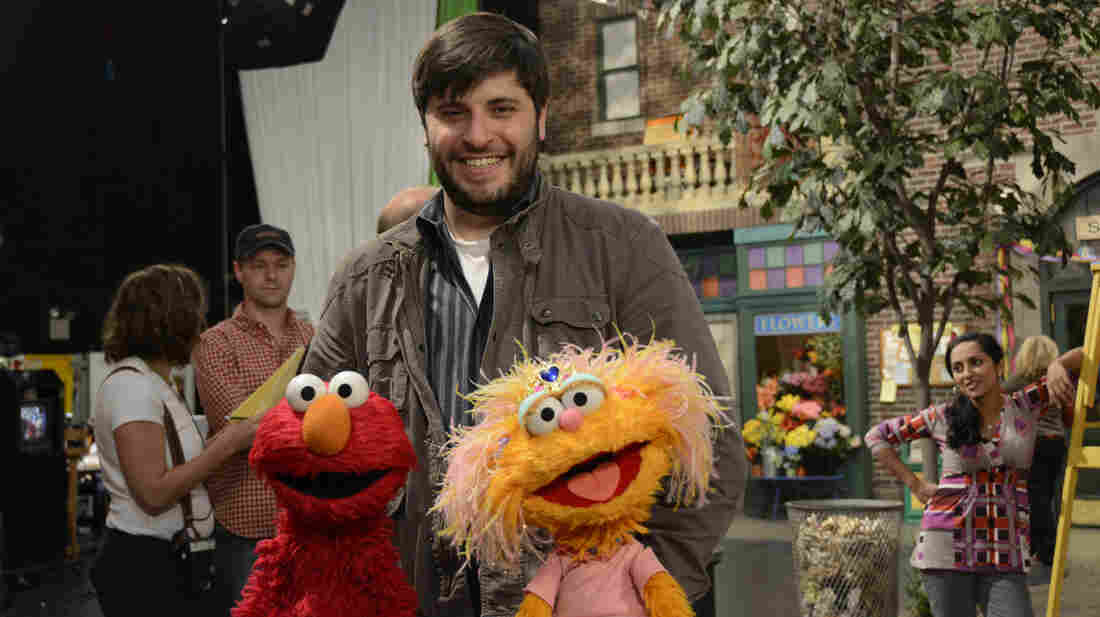 Sesame Street music director Bill Sherman with Elmo and Zoe on the set. Sherman won a Tony Award for In the Heights in 2008 and has recruited Broadway peers to compose for the children's show. Howard Sherman for NPR hide caption 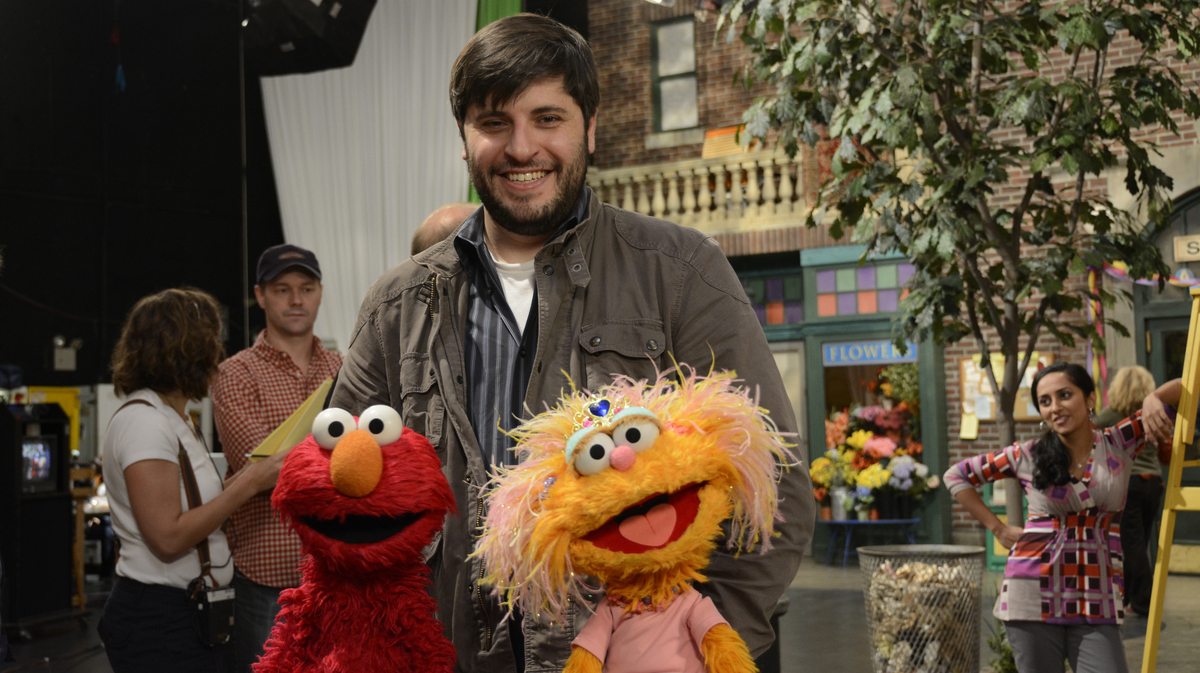 Sesame Street music director Bill Sherman with Elmo and Zoe on the set. Sherman won a Tony Award for In the Heights in 2008 and has recruited Broadway peers to compose for the children's show.

Turns out there's a shortcut from New York's theater district — and it's landed a number of Broadway's top songwriting talents on the venerable children's program.

The man to see is Bill Sherman, a 2008 Tony Award winner for his work on orchestrations for In the Heights. Sherman is in his fifth season as music director for Sesame Street. Back when he started the job, Broadway's songwriters were an obvious go-to.

"I knew them," he shrugs. "It was easy access. I was trusting songwriters I knew and loved."

He's since discovered that no matter whom he calls, Sesame Street meets with universal enthusiasm. "Everybody will stop some really important thing they should be doing and really focus on this."

From A College Buddy To Strangers In The Biz

Sherman's first call, five seasons back, was to Lin-Manuel Miranda, composer and lyricist of In the Heights. "Lin has been my best friend for 10 years," Sherman says. "We went to college together, so asking him to write a song was very easy."

Miranda was followed by other Heights alumni, Alex Lacamoire and Chris Jackson, and by composers Jason Robert Brown (Parade, The Last Five Years), Justin Paul (A Christmas Story) and Tom Kitt (Next To Normal). And while some of these artists typically write both music and lyrics, Sesame Street primarily taps into their composing skills.

"So much of what we do is curriculum-based that it has to go through many levels of approval," Sherman explains. "So most of the lyrics come from the [Sesame Street] scriptwriters."

Miranda, an adept lyricist, says being forced to focus solely on the music was "enormous fun."

"What Rhymes with Mando?" was composed by Tony-winner Lin-Manuel Miranda for the show's 44th season.

"It's easier than usual, since lyrics take longer," he says — though he's quick to note that he confers with the show's wordsmiths.

"The writer will say, 'It's very Harry Belafonte; it's Ravel's Bolero; it will build and build.' You get a sense of what they were thinking, of the rhythm that's in their heads."

With "Elmo the Musical," More Shots At The Spotlight

Sesame Street's musical universe expanded further when the show introduced its "Elmo the Musical" segments — stand-alone bits, eight to 10 minutes long, that take place entirely in the imagination of the childlike red fuzzball.

The Elmo the Musical segments are through-composed — musicalized from start to finish — "so each composer had their chance to really sink their teeth into the music," Sherman says. "It became their episode, their thing. We tried to figure out a way to use the composers' strengths for whatever particular episode it was."

An installment called "Detective," for instance, "asked for this complex, jazzy [sound], and Jason Robert Brown is known for that."

Like all the composers, Brown — who's never met Sherman — jumped at the opportunity.

"I had a 2-year-old who stared at Elmo all day long," Brown says. "So there was nothing better than that."

Then came the kicker: That episode's script was to be written by John Weidman, a Sesame Street veteran and co-creator, with Stephen Sondheim, of iconic musicals like Assassins and Pacific Overtures. 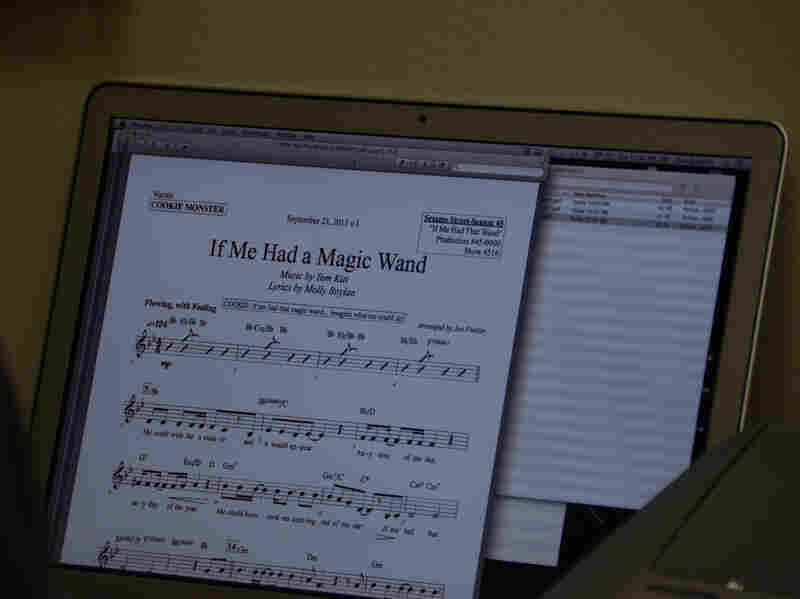 Tom Kitt, who wrote "If Me Had a Magic Wand" for Sesame Street, won a Tony Award for the Broadway musical Next to Normal. Howard Sherman For NPR / hide caption 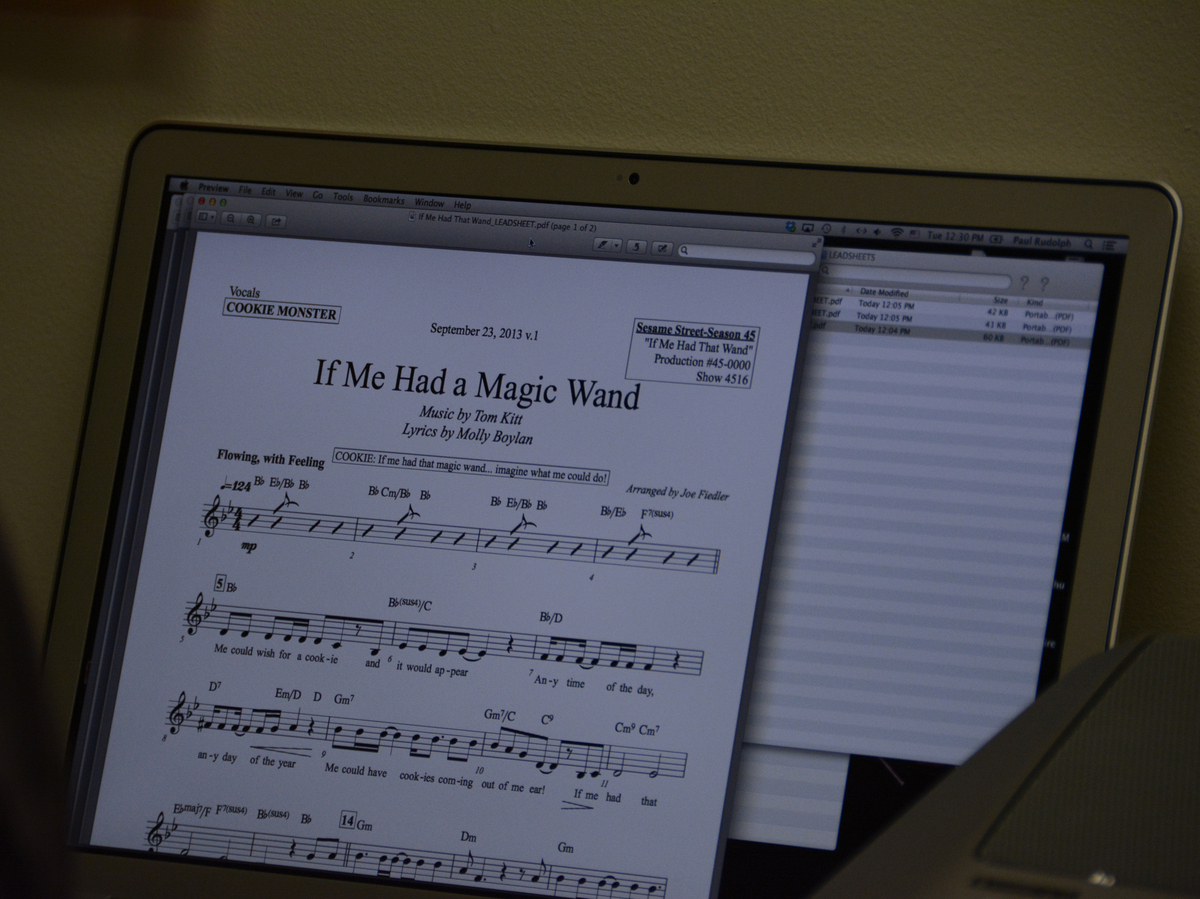 Tom Kitt, who wrote "If Me Had a Magic Wand" for Sesame Street, won a Tony Award for the Broadway musical Next to Normal.

"I called him and said, 'So we're finally writing a show together, only it's for a furry red puppet,' " Brown says. "When I got the recording of Elmo, I could not have been more excited if it had been Frank Sinatra, if it had been Joni Mitchell."

This fall, as puppeteer David Rudman laid down Cookie Monster's vocal track on Tom Kitt's "If Me Had a Magic Wand," Kitt described the song using an old-school musical-theater term. It's "a soaring, emotional 'I want' moment," he said, a readily identifiable, recognizably Broadway kind of sound.

But as Sherman is quick to point out, the "Broadway sound" is very much in flux.

"I've been part of musical-theater situations that pushed boundaries, that brought new sounds to Broadway. Taking this job, like [working on] In the Heights, was an opportunity to put new sounds in kids' ears. People assume musical theater is vaudevillian, epic ballads and tap-dance numbers. So to turn that on its head and bring in audiences that don't go to Broadway shows is important to me."

Is it a challenge for these sophisticated writers to gear their work for toddlers? "Sometimes," says Sherman, "composers think that because it's Sesame Street, they have to dumb it down. ... [But] these days children have unbelievably sophisticated ears. I think dumbing it down is disrespectful to kids."

When composers have kids of their own, they've got an in-house test panel. Brown did demos, complete with character voices, for his daughter.

Sherman has met with greater success at home.

"If my 3-year-old hears something, and 15 to 20 minutes later she's still singing it, then I know I did the right thing," he says. "If the 1-year-old dances to it, then I know that it sounds right."

There might well be more musical theater in Sesame Street's future; Sherman admits he'd like to work with Stephen Schwartz (Wicked, Pippin) and Marc Shaiman (Hairspray).

And there's one more big fish he'd like to land — the whale of the business, really.

"We toyed a bit with going after Sondheim," he said. "We haven't gone that route yet, but to call up Stephen and see if he was down [for it], that'd be funny. Why not?"