Accessibility links
The Minds Behind 'Einstein On The Beach' Talk Shop Composer Phillip Glass, director Robert Wilson and choreographer Lucinda Childs discuss their epic modern opera, which is being staged for the first time in two decades. 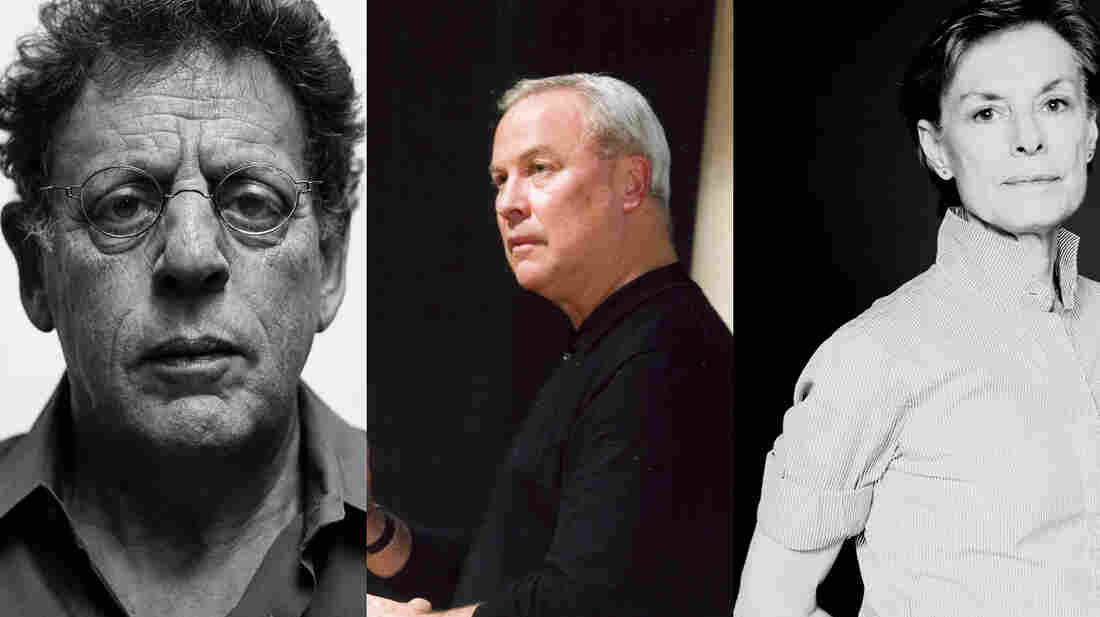 The epic avant-garde opera Einstein on the Beach, a collaboration between composer Philip Glass, director Robert Wilson and choreographer Lucinda Childs, is being revived for the first time in two decades. Los Angeles Opera hide caption 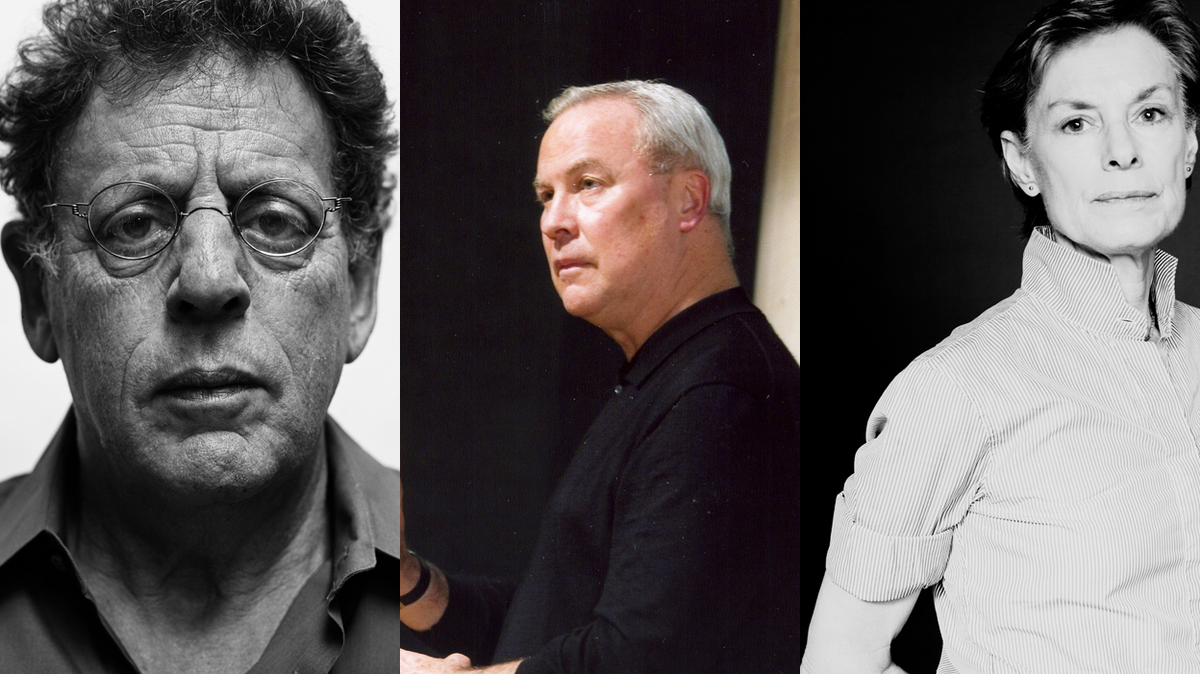 The epic avant-garde opera Einstein on the Beach, a collaboration between composer Philip Glass, director Robert Wilson and choreographer Lucinda Childs, is being revived for the first time in two decades.

Philip Glass has achieved a rare feat for an American composer. He's embraced by the musical establishment, and his music is heard far outside classical circles. (Beck recently helped him produce a tribute album.) But as a revival of Glass' most famous opera, Einstein on the Beach, hits the Los Angeles Opera this weekend, attended by the likes of Kim and Kanye, it's easy to forget just how far this music was from the mainstream when it premiered.

After its Met debut in 1976, it received this summation from New York Times critic Clive Barnes: "I have rarely heard a first-night audience respond so vociferously at the Metropolitan Opera House as for this bizarre, occasionally boring, yet always intermittently beautiful theater piece."

Phillip Glass himself says Einstein was crafted with intent to implicate viewers. "It's a story that you have to create for yourself," Glass says. "We don't give you a plot; we give you a theme. And the audience completes the story."

The opera makes intense demands of its performers and its audience: four and a half unbroken hours of music. The audience is invited to get up and take breaks as they need them.

There's no plot, but the opera is about Einstein — kind of. It's also about the existential uncertainties of living through the nuclear and information ages. And about women's liberation. And space exploration. And a lot of other stuff. There are texts of nonsense syllables, solfege notes and strings of numbers, spoken and sung.

When you talk with Philip Glass about the opera's popularity, he's quick to point out that this current run is actually the first full production of the work since the 1990s. 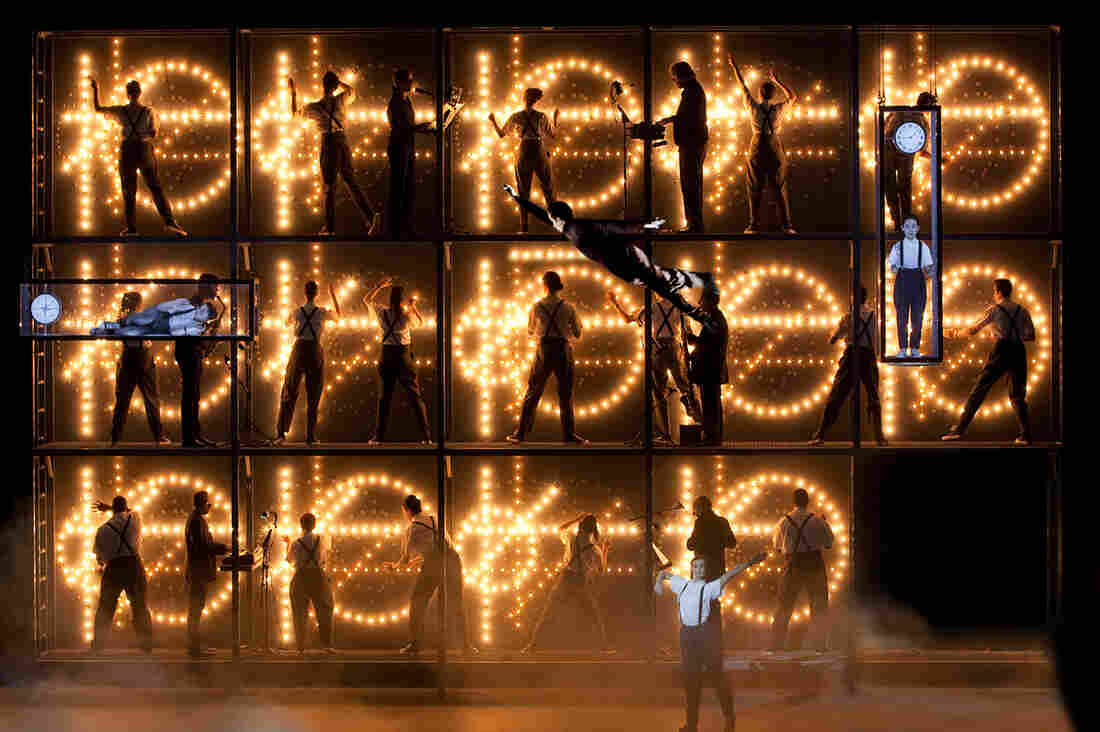 A scene from the revival of Einstein on the Beach. Los Angeles Opera hide caption 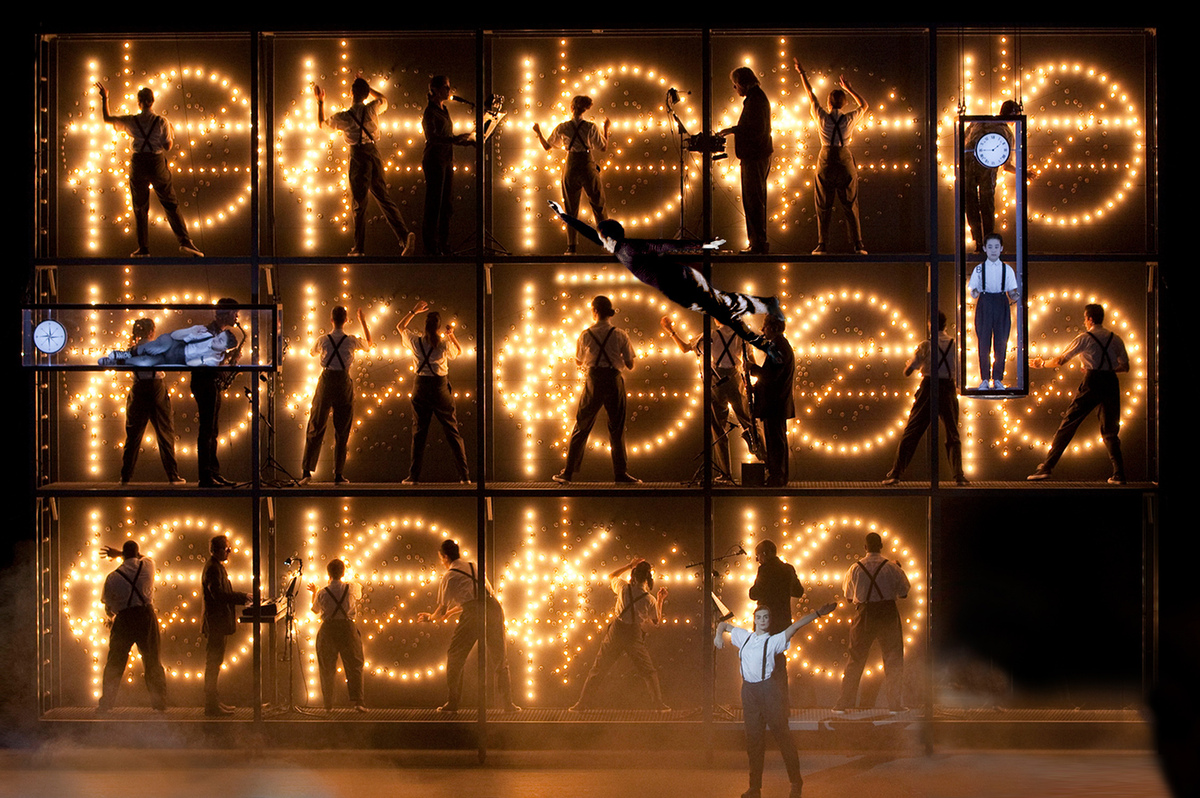 A scene from the revival of Einstein on the Beach.

"There hasn't been one in 20 years. You couldn't even see an imitation of Einstein; no one did it," Glass says. "So that when we do it now, people are seeing it really as if it's for the first time, because, in fact, for them it is the first time."

Glass says listening to the opera on record only gives you half of the experience, at best.

From the start, Einstein on the Beach was a collaboration between Philip Glass and the visionary director and playwright Robert Wilson. I spoke with Wilson at the LA Opera this week.

"First meeting, I ask him how he wrote music," Wilson recalls. "And then he showed me in terms of math and numbers, and I said, 'Oh, that's very similar to the way I construct a play.' We soon realized that we thought alike, and we decided from the very beginning that we would make a work together."

They agreed to work on a long-form piece, based on an historical character.

"At one point, we had to find a name for the piece and what the piece would be about. We ended up with Einstein; that was the third idea," Glass says. "I think he suggested Hitler. And I didn't like that one. So I said, 'What about Gandhi?' That was kind of the opposite! I think he didn't respond to what a theatrical idea of Gandhi would be. And then he said, 'What about Einstein?' Well, Einstein had been a great hero of mine since I had been a child, so I immediately said, 'That's great! That's the idea.'"

Wilson began drawing, and Glass composed to the drawings, setting them out on his piano as he wrote the score. Wilson's vision was as far as you could get from the mainstream. He says that when he first arrived in New York from Texas, he was actually repulsed by Broadway musicals.

"First of all, they were quite grotesque visually," Wilson says. "I was much more interested in going to a museum and looking at paintings than to see this trash on Broadway. And the same with the Metropolitan Opera: you know, the make-up, the costumes, the gestures, the way they behaved on stage, the scenery. It was grotesque."

But seeing the work of George Balanchine and the New York City Ballet triggered the opposite reaction in Wilson. Finally, someone was speaking his language.

"What interested me was dance — the way that it was constructed with time-space constructions, and that it was abstract," he says. "I always thought: Why couldn't theater be that way? Or an opera? So that's what we did."

For that vital dance element, Glass and Wilson turned to avant-garde dancer and choreographer Lucinda Childs. Like Glass and Wilson, she had a mathematical sensibility in her approach. 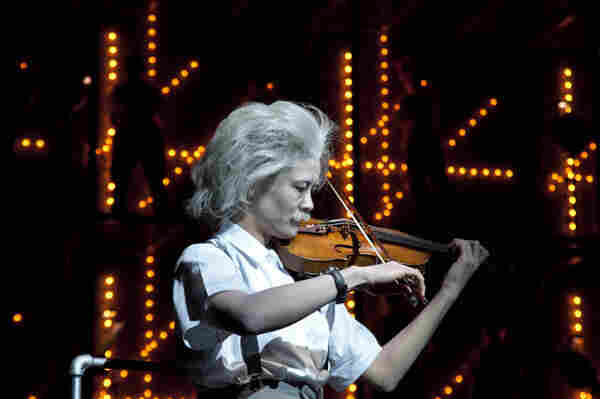 "I had never worked with a composer before in this kind of traditional way," Childs says. "However, I felt that there was so much freedom in terms of thinking about the structure of the music that I didn't necessarily have to illustrate it, and I didn't have to ignore it. But I could find a dialogue in working with the music because of the mathematical structure. It was something I could respond to, similar to the way I work with my choreography."

Just as Einstein on the Beach challenges audiences, the performers do not have an easy ride. Musicians are required to act; the violinist Jennifer Koh is playing Einstein in this production. Some of the performers fly. During the dress rehearsal, the staging looked as complicated as a Cirque du Soleil show.

The challenges could be one of the reasons that, for all that it's celebrated, the influence of Einstein on the Beach on modern opera has been limited.

"At the time, people said, 'Oh, it's changed the world of opera!' Actually, it never did," Glass says. "There was never another Einstein. No one did The Son of Einstein or Waiting for Einstein. It never was imitated. One of the reasons that people like it so much today is that they haven't seen it."

If the scene at the LA Opera last night was any indication, that may be about to change.