Accessibility links
Not My Job: A Quiz About Lawyers For Breaking Bad's Bob Odenkirk Odenkirk plays the less-than-noble lawyer Saul Goodman on AMC's Breaking Bad, so we've invited him to answer three questions about inspiring, even heroic lawyers. He has a new show on IFC called The Birthday Boys. 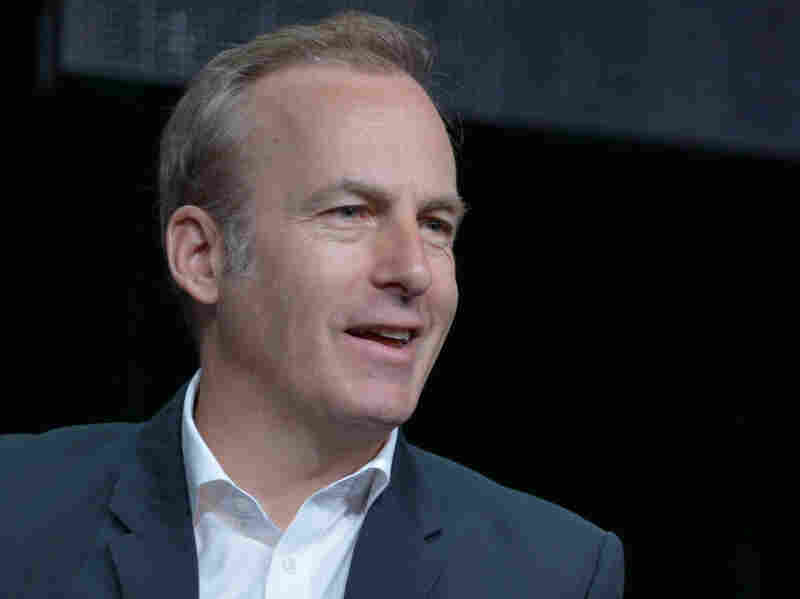 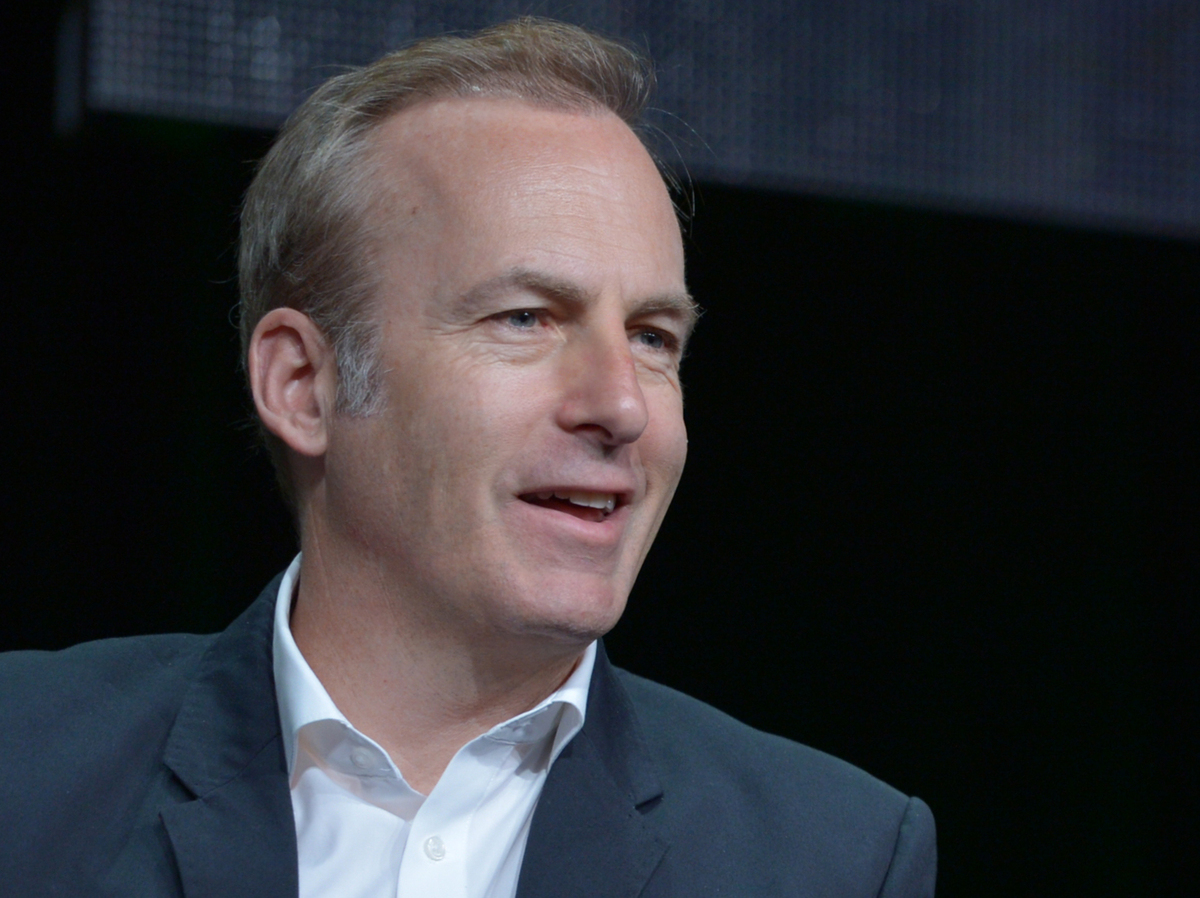 If you're a comedy person, you know Bob Odenkirk from the cult classic sketch series Mr. Show. If you're a drama person, or a meth person, you know him as the shyster lawyer Saul Goodman on Breaking Bad. Now he has a new show on the IFC called The Birthday Boys.

We've invited Odenkirk to play a game called "Better not call Saul." Since he plays a less-than-noble lawyer on Breaking Bad, we're going to ask him three questions about inspiring, even heroic lawyers. If he gets two out of three right, he'll win a prize for one of our listeners — Carl's voice on their voicemail and eight barrels filled with $10 million each.

And now the game who does a bunch of things really well tries his hand at something else. If you're a comedy person, you know Bob Odenkirk from "Mr. Show," the cult classic sketch series that he did with David Cross. If you're a drama person, or if you're interested in meth, you know him as the shyster lawyer Saul Goodman on "Breaking Bad."

He's got a new show on the IFC called "The Birthday Boys" and a new book out, as well. Bob Odenkirk, welcome to WAIT WAIT...DON'T TELL ME!

BOB ODENKIRK: Oh, my goodness. Hi there, thank you so much for the warm welcome.

BURBANK: I haven't finished it yet.

SAGAL: You haven't finished it yet?

SAGAL: Well, all of us - OK, first question. All of us who have finished "Breaking Bad" or who are watching it had to be so careful about spoilers for the last season. You've known for, like, what? When did you finish shooting it, six months ago, eight months ago?

ODENKIRK: Yeah, but I didn't read the final episode and a half. I didn't read anything I wasn't in, how about that, for the last...

SAGAL: And did people come up to you during those months, the last final season hadn't even started, and they're like so, can you - I mean...

ODENKIRK: Yeah, they came up and said, so seriously what happens? Don't tell me; don't tell me.

SAGAL: You did the - let's go back a little bit in time. First of all, you grew up here in Chicago and were part of the sketch comedy scene, right?

ODENKIRK: Yeah, I grew up in Naperville, Illinois.

ODENKIRK: A great little town, although I couldn't wait to get out when I was 15.

ODENKIRK: But I was - that would've been true wherever I was. I went to Chicago, I did sketch comedy, did a short trip in Europe. And I loved sketch comedy since I was a little kid. I did it in junior high, and I did it in high school as part of my school projects, I would write sketches.

SAGAL: Right. Now what kind of sketches were you doing as a kid? What were some of your early work like?

ODENKIRK: I wrote, for class, comedy sketches. One was about Ghana.

ODENKIRK: And one was about the Chicago fire. And then there was one about Abe Lincoln, which has been my go-to comedy touchstone.

ODENKIRK: Yes, I did this one-man Abe Lincoln show that's basically a guy who is filling in for the actual Abe Lincoln one-man-show actor, and he doesn't know anything about Lincoln except what he's picked up from hearsay and placemats at restaurants. In it I stand up, and I take a penny out and look at it and go hmm, I've lost weight.

SAGAL: So you wrote for "Saturday Night Live" for a while, and...

ODENKIRK: Yeah, I wrote there for four years.

SAGAL: And you did a show with your partner David Cross called "Mr. Show," which was one of the greatest, weirdest things I've ever seen.

ODENKIRK: It just is - it's got some edges on it, you know.

SAGAL: Right, but like there was that sketch about the farting performer.

ODENKIRK: But that was - you know, we were in Montreal that year at the comedy festival, and there was a guy who farted as his act.

SAGAL: That was his actual act?

ODENKIRK: He's also a French guy. The French love, and I don't know if it's harder to fart or why it's a prized skill, but...

BABYLON: But you know what? No, I'm not into fart humor, I think I'm beyond that, but I will say farting on cue...

SAGAL: What are you doing here? Never mind.

BABYLON: Farting on cue is a skill set. Let's be real.

ODENKIRK: Well, I don't know about that. Well then I guess my son's good at something.

SAGAL: This was with your partnership with David Cross. David Cross has been in the show - people might know him best these days playing the Tobias Funke on "Arrested Development." And how did you guys meet?

ODENKIRK: Well, he got hired when I was writing on "The Ben Stiller Show." He was hired as a writer. I was also in the cast of that show, and he was hired as a writer, but actually before that, Janeane Garofalo was a friend of his and a friend of mine. One day here in L.A., I was sitting in my living room, and the door was open, and the screen door was closed, and Janeane lived three or four blocks away from me, and David was visiting her.

And there's nothing to do during the day when you're a comic. So she...

ODENKIRK: There's nothing healthy to do.

BABYLON: There we go.

ODENKIRK: And she said why don't you - you like basketball. My friend Bob Odenkirk likes basketball, why don't - you guys can play. I'll walk you over there; you can meet him. So David didn't want to do this, but he grabbed a basketball, walked over to my house with Janeane, stood outside, and they were looking at me through the screen door.

And I remember this, and Janeane goes this is my friend David, he likes to play basketball. I wonder - he wanted to know if you wanted to.

ODENKIRK: And I said - and I looked over, and I went you know what, I'm eating lunch right now, so no. And that was it. And that was - and then he walked away, and it was the most embarrassing thing he'd been through. And...

SAGAL: Was it just so weird that she was trying to introduce you like for a play date with another grown man. Was that the problem?

ODENKIRK: No, I just think I was a cold bastard.

SAGAL: Oh, well, that could be a problem.

SAGAL: Well, Bob Odenkirk, we are delighted to talk to you.

SAGAL: And we've invited you here to play a game that this time we're calling...

SAGAL: So as we've been discussing, on "Breaking Bad" you played less-than-noble lawyer Saul Goodman. But we're going to ask you about three noble, inspiring, even heroic lawyers. Get two out of three questions right, you'll win a prize for one of our listeners, Carl's voice on their voicemail and eight barrels filled with $10 million each buried somewhere in the desert.

SAGAL: Carl, who is Bob Odenkirk playing for?

SAGAL: And, by the way, we should tell you that David Cross, your partner, got three out of three when he played this game. All right?

SAGAL: So let's say you're the victim of injustice, and if you go to attorney Willie E. Gary's website, he shows you that he is the guy to help you by playing video of what: A, the horrible injuries suffered by his prior clients; B, his personal fleet of Bentleys; C, himself, acting out the big speech to the jury from the movie, "The Verdict."

ODENKIRK: Wow, I'm going to say his fleet of Bentleys.

SAGAL: Willie Gary, one of the most successful plaintiffs' lawyers in the country, has a fleet of Bentleys, two private jets, the second of which is a 737 called Wings of Justice 2 with a gold sink. All right, that's good.

Second question, this goes back a few years, but it one of our favorite lawyers. A lawyer threatened the Cleveland Browns with legal action about the dangerous practice of fans throwing paper airplanes at their stadium. So the team's general counsel, in response, sent back to the lawyer which of these: A, a polite apology delivered by the Cleveland Browns offensive line at two in the morning; B, a cease and desist letter, folded into a very pointy paper airplane, thrown through his window; or C, a helpful note that said, quote, "I feel that you should be aware that some (bleep) is signing your name to stupid letters."

ODENKIRK: Oh, my goodness. I like that last one. I'm going to go with the folded cease and desist.

SAGAL: You mean the folded letter into a paper airplane through his window?

SAGAL: No, it was actually the last one. It is an - you can Google it, Cleveland Browns letter about paper airplanes. It's from the '70s.

SAGAL: It's an amazing, an amazing thing. All right. That's - this is interesting. You got one out of two with one to go. If you get this one right, you'll win.

ODENKIRK: Oh, the last one.

SAGAL: Yes, you're right, the mug shot, of course.

SAGAL: Carl, how did Bob Odenkirk do on our quiz?

KASELL: Well, he had two correct answers, Peter, so he's a winner.

SAGAL: Actually, you didn't beat him, but you both won.

ODENKIRK: No, I did because I won, but I only had to get two right to win.

SAGAL: There you go. Bob Odenkirk's new book is "Hollywood Said NO!" His new show "The Birthday Boys," a sketch comedy show, premieres October 18th on the IFC. Bob Odenkirk, thank you so much for being with us. Great to talk to you. Thanks for your great work.