Accessibility links
One-Stop Shop: Jeff Bezos Wants You To Buy 'Everything' On Amazon In his new book, The Everything Store, journalist Brad Stone says Amazon "ended up forever changing the way we shop and read." He says CEO Jeff Bezos started out selling books, but always had the intention of turning the online market into a company that sold everything. 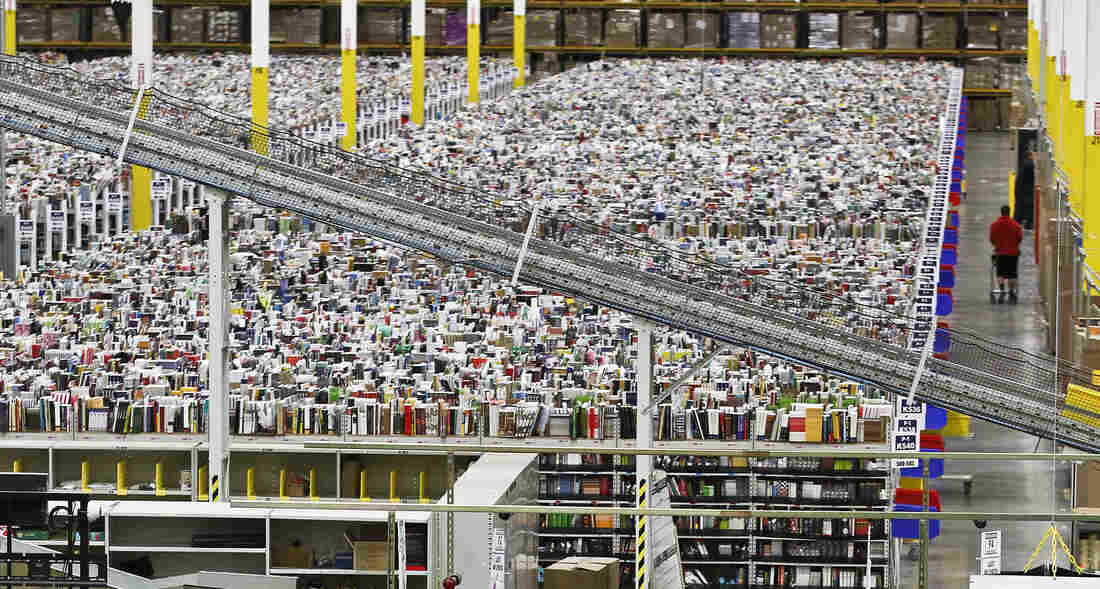 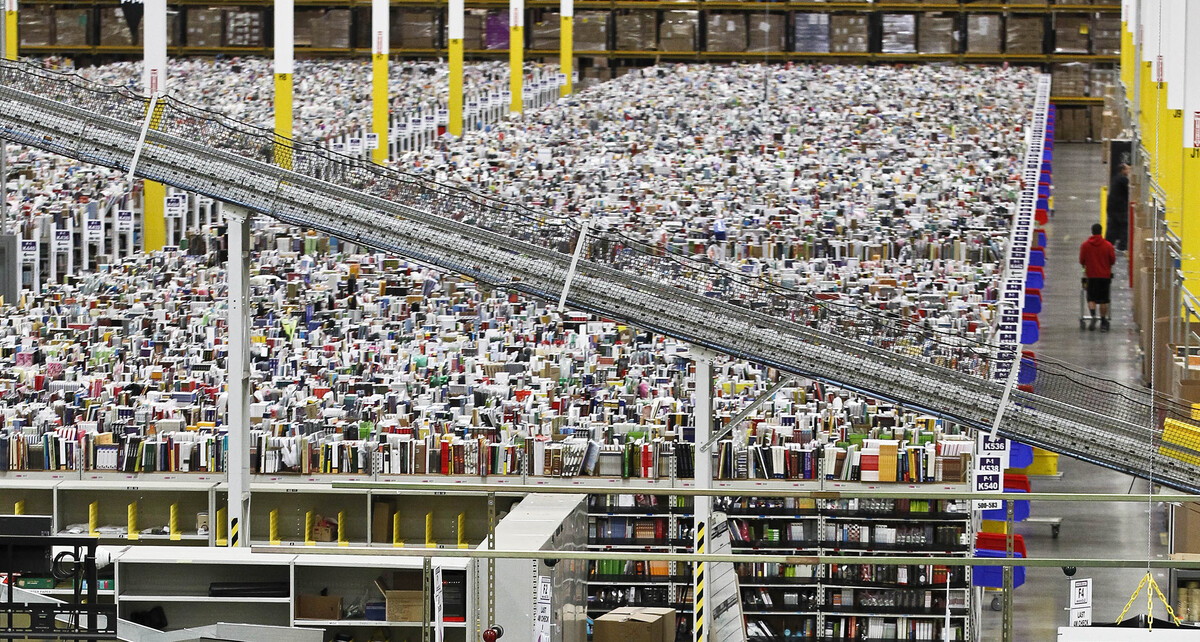 An employee walks through an aisle at Amazon.com's 1.2 million-square foot fulfillment center in Phoenix, Ariz., in November 2012.

In his new book The Everything Store, Brad Stone chronicles how Amazon became an "innovative, disruptive, and often polarizing technology powerhouse." He writes that Amazon was among the first to realize the potential of the Internet and that the company "ended up forever changing the way we shop and read." 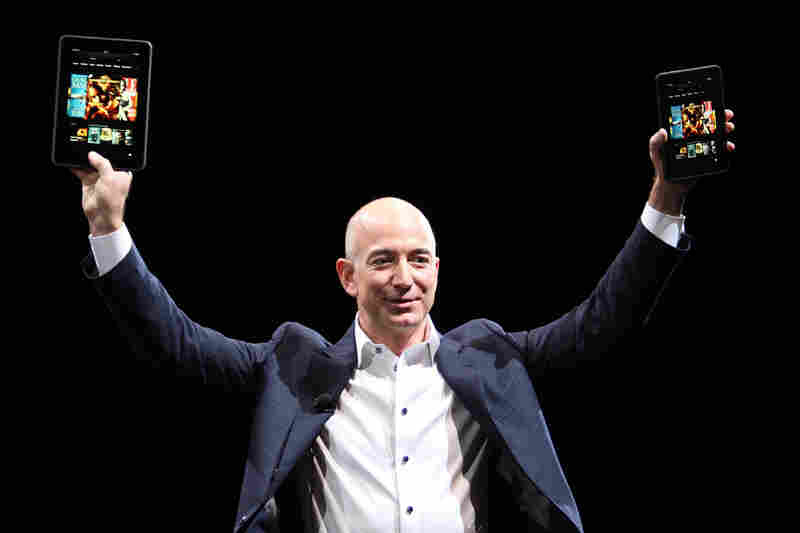 Amazon started off selling books, but Jeff Bezos, Amazon's founder and CEO, always had the intention of turning it into an online market that sold everything. In the process of becoming "an everything store," Amazon acquired many other dot-coms including Zappos and Diapers.com, and expanded into selling web services as well. Bezos owns a rocket company, called Blue Origin and in August he invested in old media, purchasing The Washington Post for $250 million.

Bezos himself is the 12th richest person in the U. S., with a fortune estimated at $25 billion. Stone, a senior writer for Bloomberg Businessweek, has covered Amazon and technology in the Silicon Valley for 15 years. His book draws on interviews he conducted with Bezos over the years as well as interviews with more than 300 current and former Amazon executives and employees.

On Bezos' intention to make Amazon an "everything store"

I think Bezos wasn't quite sure [an everything store] would work, and books were a good place to start: They're small, they ship easily in the mail, the selection that the Internet enables was a great strategic advantage over the traditional chain booksellers of the time like Barnes & Noble and Borders. But I do think in the back of his mind he was thinking of an "everything store." In fact, in 1998 when a VP came to him and showed him that Amazon's market was going to be very limited because unfortunately a lot of people don't read, he was not bothered by that at all, and told some of his minions to go study the good markets that might be next. 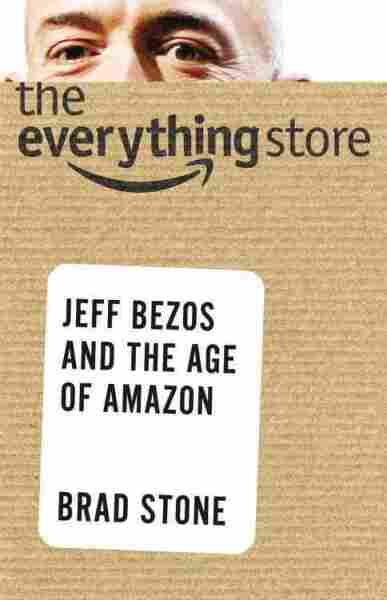 Jeff Bezos and the Age of Amazon

On the way Amazon prioritizes customer loyalty over profit

[Amazon takes] a commission every time a third party sells something on their site, so in a way it's a much more profitable sale because Amazon is taking the commission and they don't have the expense of storing and shipping the item. But it does create enormous downward price pressure. It's one of the things that merchants, or manufacturers don't really appreciate about Amazon. But as an Amazon shareholder or analyst will tell you, profit, frustratingly, is not something that Bezos or Amazon are after. They're after customer loyalty. They want to lock up the market. They want customers to make Amazon their destination for all of their shopping. So he's had this long-term view of that's the way to conduct his business, and profits are very low down on the list of his priorities.

On the working conditions in the Amazon warehouses

[Amazon] has been criticized for working employees extremely hard for extraordinarily long days, for very short 15 minute breaks that are curtailed on each end by the fact that the employees have to go through security scanners. It's an enormously difficult job. I kind of split ... the fulfillment center [jobs] into two categories: There are 10 months of the year where things are relatively tame, this is January to October. Employees get a decent wage, about $11 or $12 an hour, there are opportunities for advancement, there's some tuition reimbursement that Amazon has recently instituted. As warehouse jobs go, it's probably a little bit above average.

And then there are the holiday months. And this is, in an Amazon fulfillment center, absolute craziness. Amazon just said it was going to hire 70,000 temporary workers for this holiday season alone. It's basically doubling the number that it hired last year. In these two months there's no vacation, there's no tolerance for error. Employees are graded extremely severely. You can basically miss two days and you're out. The break rooms are crammed, I think conditions are difficult. 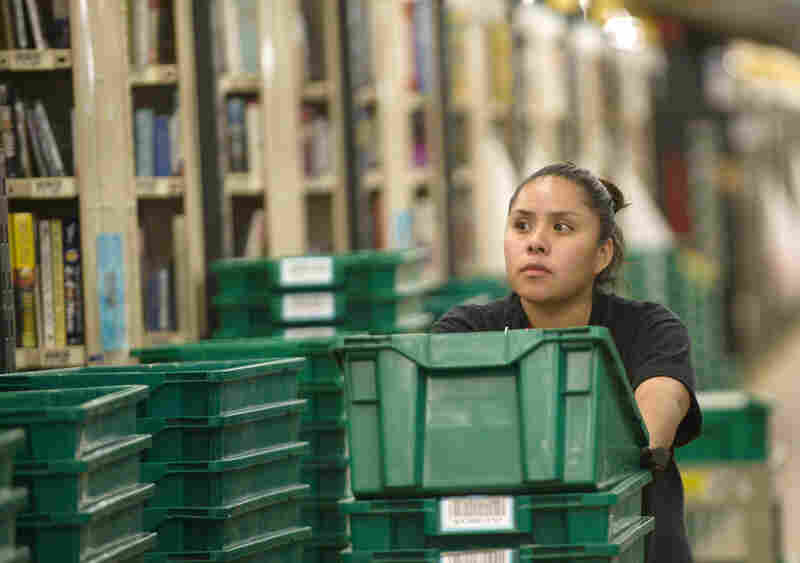 An Amazon.com employee gathers books for shipping at a warehouse in Fernley, Nev., in December 2008. Scott Sady/AP hide caption

... I think it's something shoppers should consider. Do you want your dollars to support the local merchant and the employees that they hire? Or do you want your dollars to go to support a fulfillment network that is fairly invisible, that involves many manual and very difficult jobs. On the other hand, we can probably credit Amazon for probably creating some jobs in places where there wasn't a lot of economic opportunity. But nobody should have any illusion: Working in an Amazon fulfillment center is probably one of the most difficult jobs going today.

On the way Bezos runs Amazon

Bezos is a hands-on CEO. He runs the S-Team, which the senior leadership team, he does, I think, spend a lot of his time in the digital initiatives like the Kindle and Kindle Fire. ... But he also runs the bi-annual operating reviews, called OP1 and OP2, he goes to a lot of meetings. ... One of his great talents is very efficiently dispersing his time... but he's extremely hands-on.

One of the things he does is his email address is public — it's jeff@amazon.com. And when he gets an email from a customer, perhaps complaining about something, he'll just forward that with a "?" to the right executive or employee. And you get a question mark email, which is called an "escalation" inside the company, and it is frantic. Everybody drops what they're doing to address the problem. So he has a lot of specific ways where he magnifies his time and insight to extend his influence inside this giant company.

I concluded that it wasn't all that surprising. I mean, Jeff Bezos has shown over many years that he is a huge fan of the written word. Written documents are key to how Amazon is run. Every meeting starts with a quiet reading of a "six-page narrative," [as] they call them. Of course he started the business with books and about a decade later started the Kindle and kind of revolutionized the book business, so the written word is really key to what he's built. ... I think the opportunity was presented to him when the Graham family decided they wanted to get out of the business, and he thought that his special brand of innovation and long-term thinking and operating discipline could help to revive this franchise.

... My reaction was almost, "Good for the reporters of The Washington Post." I mean, here they are stewing in the pessimism and ... decline of the newspaper business and finally they have someone with very deep pockets and a very long runway, who will probably have quite a personal stake in seeing this thing revived.

Read an excerpt of The Everything Store