Accessibility links
Kenyan President Faced Justice With Help Of Secret Envelope President Uhuru Kenyatta and his deputy face charges at the International Criminal Court of instigating and financing deadly tribal violence after the disputed 2007 election. Their cases might never have reached this stage if not for one Kenyan judge and a remarkable disappearing act. 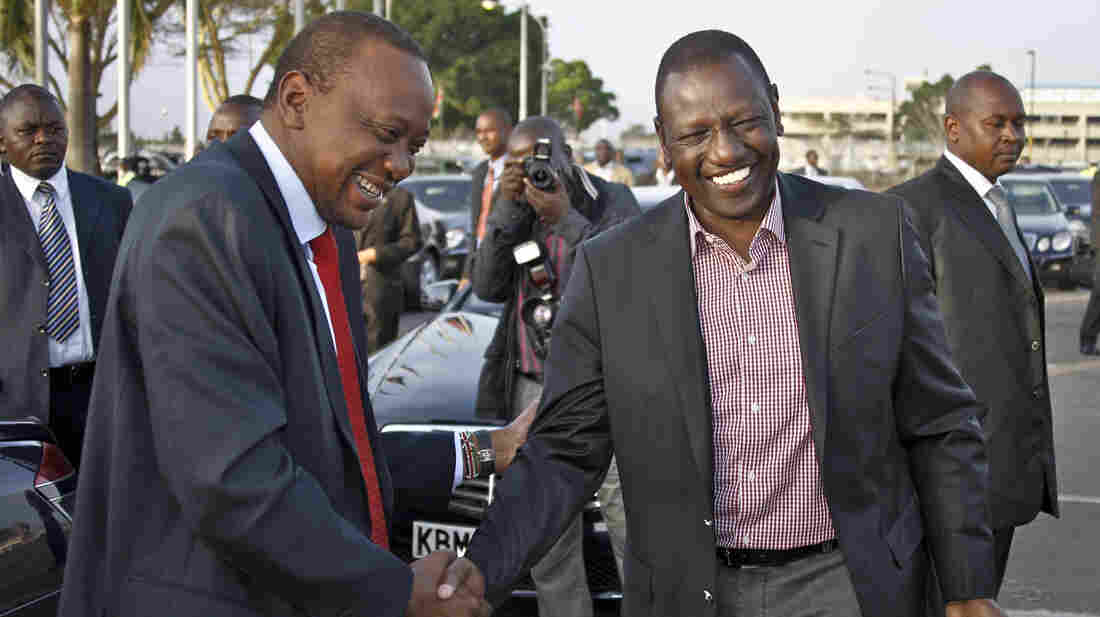 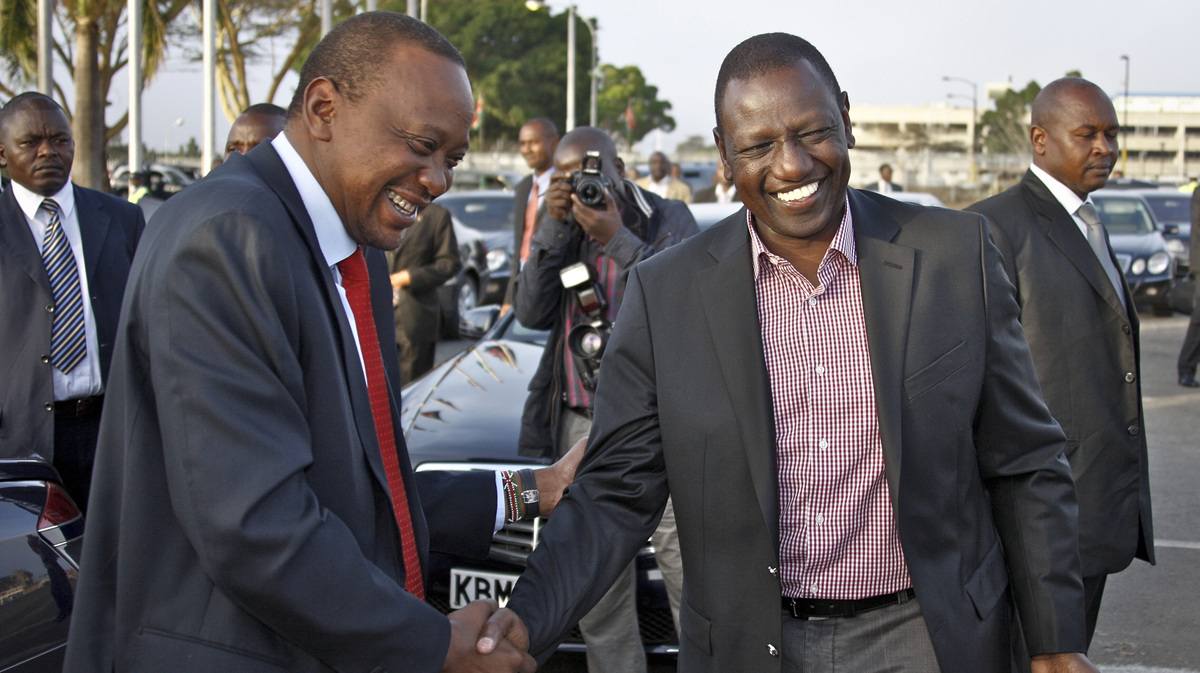 Kenya's deputy president William Ruto is back before the International Criminal Court in The Hague on Monday. He and his boss, President Uhuru Kenyatta, face charges of instigating and financing deadly tribal violence in Kenya after that country's disputed 2007 election.

But their cases might never have reached this stage if not for one Kenyan judge and a remarkable disappearing act.

Justice Philip Waki was a Kenyan appellate judge appointed to chair a Commission of Inquiry to find the top political officials who instigated the post-election violence of 2007 and 2008, violence that killed more than 1,100 people.

But in Kenya, Commissions of Inquiry are viewed with skepticism. "Commissions end up being toothless bulldogs," says Maina Kiai, a human rights advocate and government critic. "They make a lot of noise. Some that have got good reports, they go nowhere."

Justice Philip Waki didn't want his report to fall prey to politics, so he made an unexpected move. Instead of publishing the names of the accused, he sealed them in an envelope. To keep justice blind, Judge Waki kept the names in the dark.

Then he ordered that envelope not to be opened until Kenyan politicians established a special court to try these people. If the government of Kenya failed to set up a special tribunal, he ordered, the envelope with its names and the evidence collected by the commission would be handed over to the International Criminal Court.

That's what happened when Kenya's parliament failed to set up a tribunal. And at this time, there was wide support in Kenya for the ICC. One survey showed that 80 percent of Kenyans supported the ICC, but politics could be kept out of the justice process only so long.

A Change In Tone

In December of 2010, ICC prosecutor Luis Moreno Ocampo released the names of the people he had decided to prosecute.

The announcement of the names changed the fault lines of Kenyan domestic politics. The two most powerful people on the list, Uhuru Kenyatta and William Ruto, teamed up to run on the same presidential ticket. These were the leaders of two tribes that were murdering each other after the last election. Now they were waving from the windows of the same tour bus.

Most surprising to some Western observers, they won the election, not despite the ICC but by playing the ICC charges to their advantage. In campaign stops, Kenyatta and Ruto hit the message that the ICC was an instrument of the West to sideline not just the two of them but both of their tribes, the two biggest tribes in Kenya. To some it sounded like a conspiracy theory, but Kiai says in Kenyan tribal politics, it made sense.

"In this country, the presidency has historically been everything," Kiai says. "You capture the presidency; your people, your constituents get roads, they get water, they get electricity, they get good schools, they get health care."

Kenyan voters from Ruto's Kalenjin and Kenyatta's Kikuyu tribes could be convinced that if their leaders were sent to jail, then they would be the ones to suffer. After all, Kiai says, if the leaders are made to "pay for their crimes," then the little people "won't have access to the little crumbs we get from them in the patronage system."

This, he says, is the biggest challenge of the international court. It was created in order to hold powerful people accountable in countries without strong systems of justice. But in those countries without strong institutions, where patronage prevails, can the ICC hold an individual leader accountable and not seem to punish all the people under him?

John Githongo, a prominent activist and former whistleblower on government corruption, says the ICC is at best "a blunt instrument."

Did Kenyan Soldiers Loot Mall During Fight With Terrorists?

Why Kenya Is An Inviting Target For Terrorists

In Kenya, Questions Arise Over Reported Warnings Of Attack

"It doesn't understand the nuances of Kenyan tribal alliances and politics," he says from his office at Ni Sisi. "It takes evidence and says, 'OK we can build a case against these six guys.' "

The six men that the ICC chose to prosecute all came from just two tribes. Kenyans widely believe that other names, from other tribes, were in Judge Waki's still-secret envelope. Githongo says the ICC could have had perfectly sound legal reasons to choose just those six, but in limiting itself to trying people only from those two tribes, he says, the ICC made itself vulnerable to the charge of tribal favoritism.

"Politics is beginning to chip away at ICC support," says Mwalimu Mati, director of Mars Group Kenya, a government accountability watchdog. He says the recent terrorist attack on Westgate Mall may have chipped away support still further, highlighting for the first time since his election Kenyatta's role as commander-in-chief.

"[Commander-in-Chief] is different from the head of your government," Mati says. "As head of government, his election is disputed by half the country. But as commander-in-chief, you do need someone sitting in that seat. Now the question: Do you want your commander-in-chief to go to Holland to attend a trial? Or put another way: [Is it] justice for the victims or security for me? And that's what's happening to people," he says.

These questions are pulling at Kenyans at the same time. Even as bodies are still being identified in the rubble of Westgate, witnesses back in The Hague have resumed testimony against Kenyatta's deputy, William Ruto. And as for President Kenyatta, the judges at the ICC denied his petition to delay his own court date to deal with Kenya's security. His trial begins as scheduled in November.

This past weekend, the political backlash against the ICC went continent-wide. African leaders asked the United Nations Security Council to suspend the case. The head of the African Union even said that the ICC should not be allowed to bring charges against any acting head of state.

The AU instructed Kenyatta to boycott his own trial at The Hague if the U.N. doesn't answer its request to delay the trial at least a year. A no-show by the president could technically trigger an arrest warrant. But Western nations may be reluctant to antagonize a key partner in the war on terror.