Accessibility links
Fuel In The Fire: Burn Wood For Power Or Leave It To Nature The record-breaking wildfire in Yosemite National Park is calling attention to a problem found across the West: Forests are overloaded with fuel after a century of putting out fires. What to do about that is fueling its own heated debate. 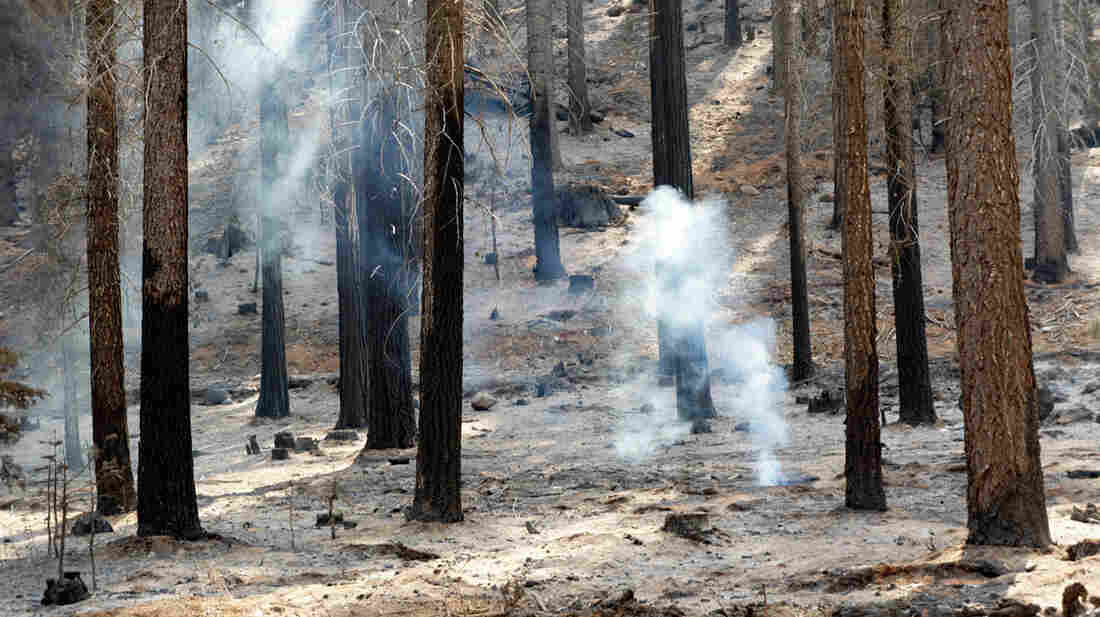 A hot spot smolders in the burn area of the Rim Fire in Yosemite National Park. Lauren Sommer/KQED hide caption 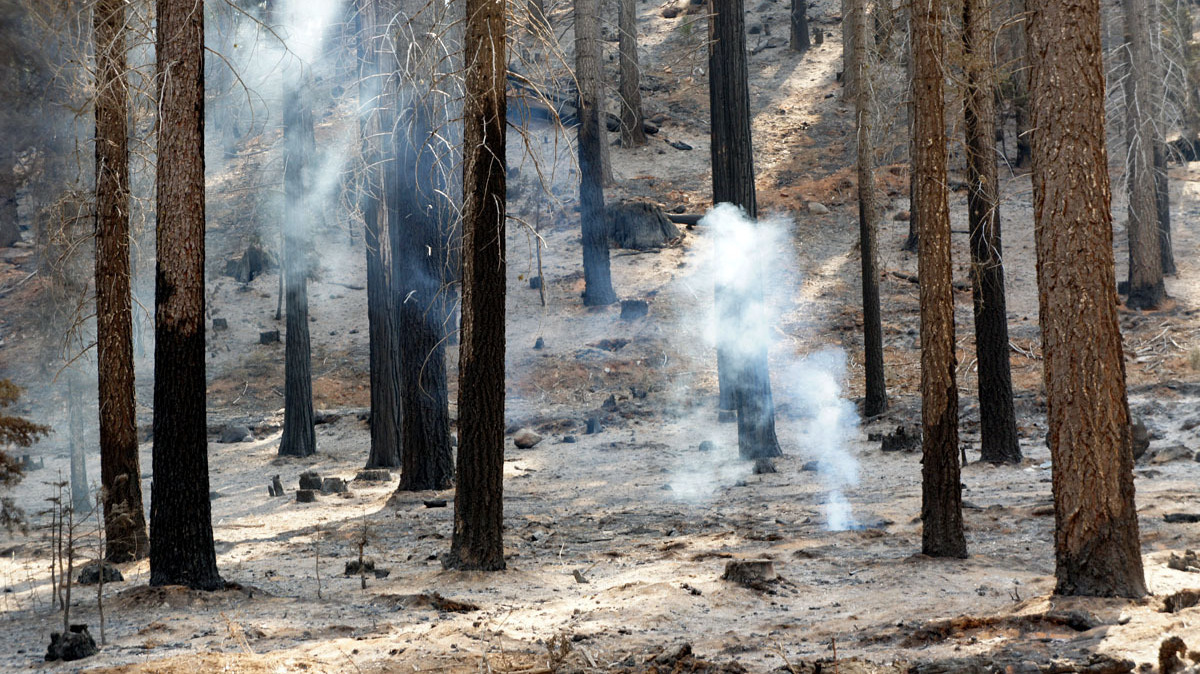 A hot spot smolders in the burn area of the Rim Fire in Yosemite National Park.

The record-breaking wildfire in Yosemite National Park is almost fully contained, two months after it started. The blaze calls attention to a problem across the western U.S.: After a century of having its fires routinely extinguished, the forests are overloaded with fuel.

A heated debate has flared up about what to do with that forest fuel. California is hoping to reduce its fire risk through renewable energy, but some worry about the environmental costs of thinning the forests.

The forest right after a big fire is incredibly quiet. There are no birds. No bugs. No pine needles rustling in the breeze. Just row after row of blackened trees. Their bark feels like charcoal.

"The trees we see here today aren't going to make it," says Forest Service ecologist Carol Ewell as she walks through pine trees that saw some of the worst of the Rim Fire.

"We use the word 'it was torched.' So, the fire went all the way up to the top of the crown," she says. 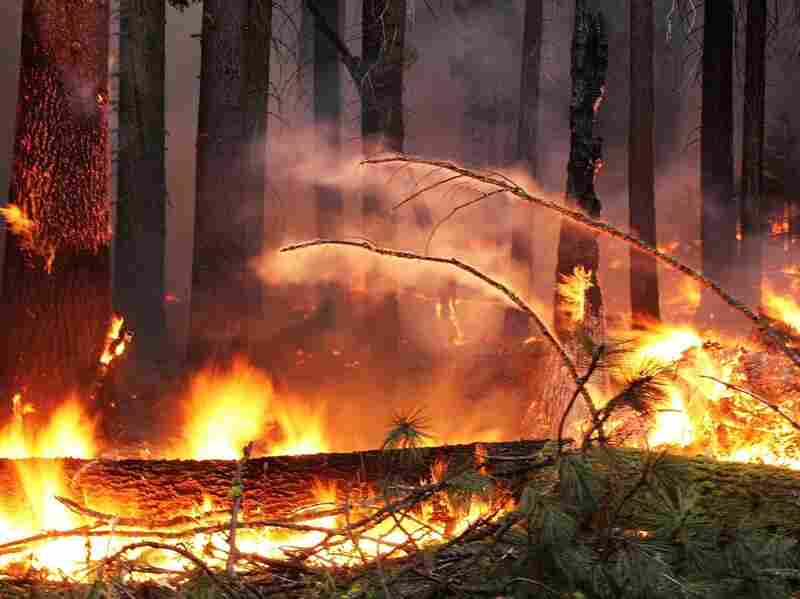 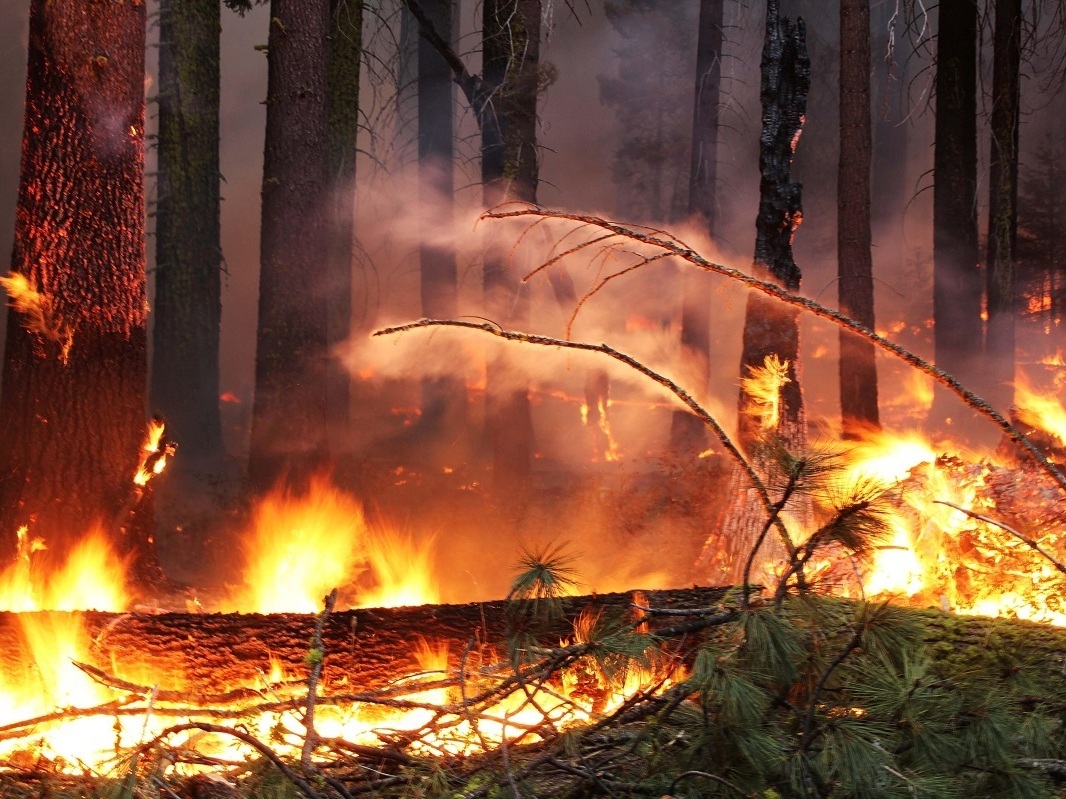 At more than 400 square miles, the Rim Fire is the largest Sierra Nevada fire in recorded history.

Ewell is here, just outside Yosemite, with fire planner Shelly Crook for some "fire forensics." The trees here are dense, just three and four feet apart. To Crook, it looks like some teenagers' bedrooms. Or rather, "what happens if you let them go three years without cleaning their room. That's what the forest is, and the vacuum cleaner out here is fire," Crook says.

For decades, the Forest Service tried to put out every fire by 10 a.m. the morning after it started. Small trees grew in and during the Rim Fire they became ladders, carrying flames up to the treetops and leaving charred trunks.

But just across the road, it looks entirely different.

She says the difference is that this area was thinned out, leaving more space between the trees. Allowing fires to burn naturally is the best way to do this, she says. But near homes and towns, contractors thin the forest. It's expensive, even when the larger trees can be sold for lumber.

Brett Storey, a program manger for Placer County, thinks there's a solution. He's showing me around a recycling facility about 10 miles from Lake Tahoe that he hopes will also be home to a biomass power plant by next year.

"Whole towns get heated like this in Scandinavian countries," he says.

The plant would turn tree branches and scrap into a gas that runs a generator, supplying about 1,500 homes with electricity. It would be fueled by Forest Service projects within 30 miles.

"I kind of joke around — they have this 10-year plan and I call it my supersize menu because it shows what years, how much acreage and what kind of material they're going to be taking out," he says.

Storey says the local utility gets renewable energy and the money helps the Forest Service reduce trees on more land. Under a new policy, California's utilities have to buy electricity from 15 to 20 new small biomass plants like this one. The effort is running into an age-old debate about forest thinning.

"You can call it thinning, but thinning is really logging," says Kevin Bundy of the Center for Biological Diversity, an environmental group. "You have to build roads and skid trails and landings. There can be a fair amount of environmental damage associated with thinning operations."

Bundy says biomass power plants would only add pressure to cut trees — trees that are storing carbon as they grow.

"When you cut those trees down and burn them for bioenergy, you put all that carbon into the atmosphere, where it warms the climate," he says.

That carbon will eventually be reabsorbed by new trees, but Bundy says the climate can't afford even a short-term increase in emissions.

Back near Yosemite, signs of life are appearing — like an ant colony coming out of the ash.

Shelly Crook says the green trees around us are just one more reason to deal with California's overloaded forests.

"It's painfully obvious to me when you look at this — this makes sense. The fire didn't do as much here, the forest is in better condition, and it might survive it," she says.

Recovery will take decades, Crook says, but she's hoping the lessons from the Rim Fire will be taken to heart long before then.