Accessibility links
Protests In Italy Shut Down Funeral For Nazi War Criminal Nazi sympathizers and anti-fascists clashed in Italy on Tuesday as a Catholic splinter group attempted to hold a funeral for Nazi war criminal Erich Priebke. The former SS captain oversaw one of the worst massacres in German-occupied Italy. Wednesday marks the 70th anniversary of the Nazi roundup of Roman Jews. 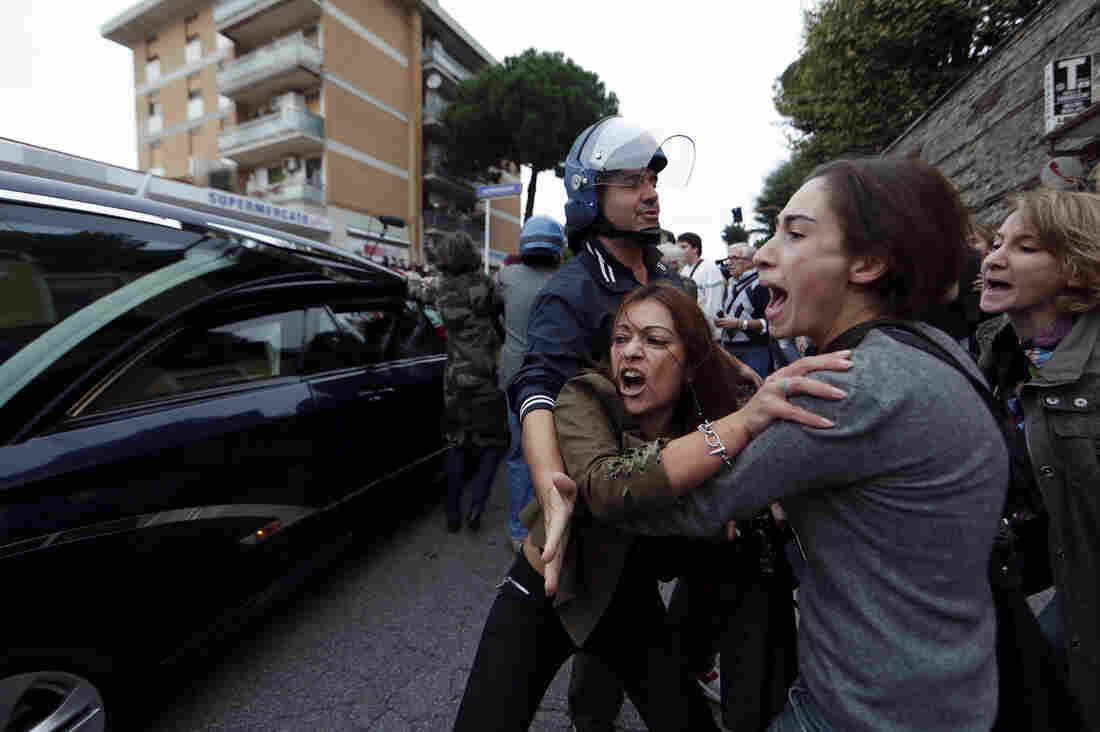 Anti-fascist demonstrators shout as the hearse carrying the coffin of Nazi war criminal Erich Priebke arrives in Albano Laziale, near Rome, on Tuesday. A Catholic splinter group planned to hold a funeral for Priebke, despite attempts by the local mayor to prevent it. STR/Reuters /Landov hide caption 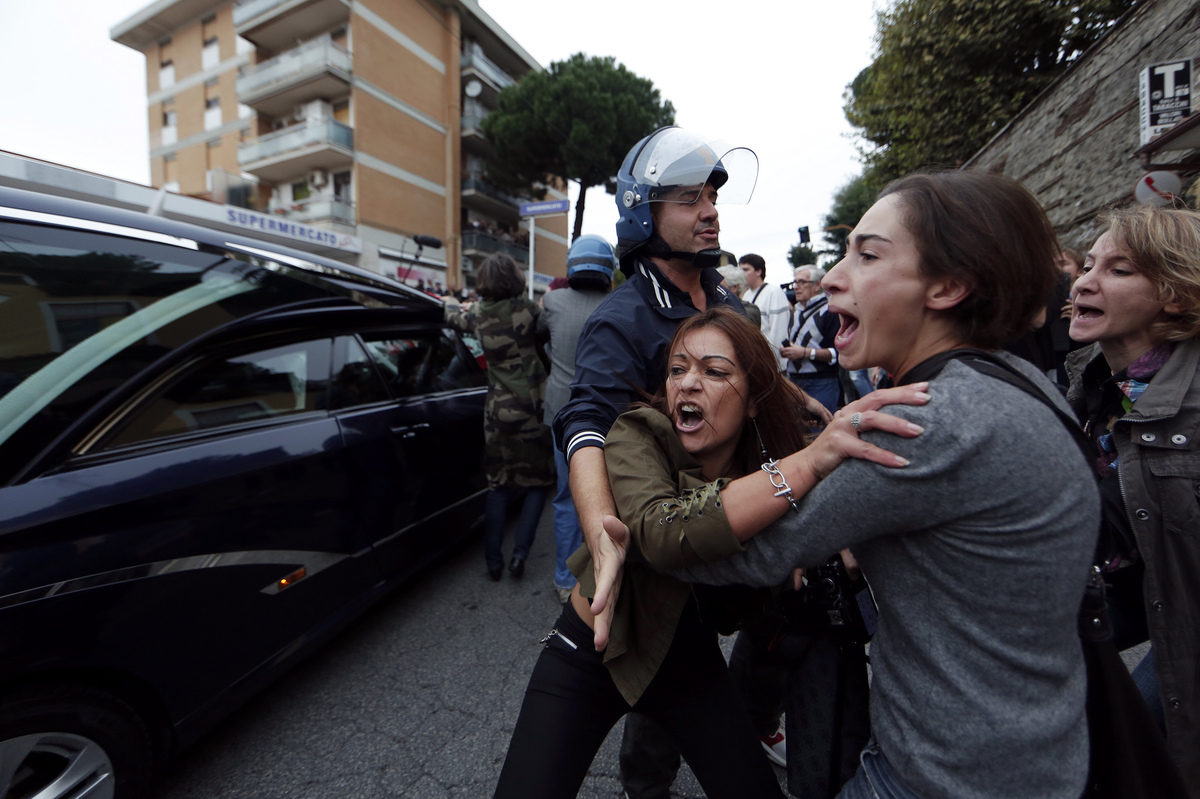 Anti-fascist demonstrators shout as the hearse carrying the coffin of Nazi war criminal Erich Priebke arrives in Albano Laziale, near Rome, on Tuesday. A Catholic splinter group planned to hold a funeral for Priebke, despite attempts by the local mayor to prevent it.

In Italy, protests and clashes erupted Tuesday as a Catholic splinter group prepared to celebrate the funeral of Nazi war criminal Erich Priebke — on the eve of the 70th anniversary of the Nazi roundup of Roman Jews.

Police in riot gear tried to keep groups of ultra-right-wing sympathizers away from citizens enraged over a religious ritual for the man associated with one of the most gruesome Nazi massacres of World War II.

Ultimately, the funeral was suspended.

Priebke, who died Friday at the age of 100, was serving a life sentence for his participation in the 1944 massacre of 335 civilians. The massacre was in retaliation for the killing of 33 German soldiers. Adolf Hitler had ordered that 10 Italians be executed for every German killed. Priebke was in charge of the SS troops who executed the civilians — partisans and Jews.

Priebke died in his lawyer's home, where he was under house arrest. And he died unrepentant: In his last interview, he continued to deny that the Nazis gassed Jews during the Holocaust. 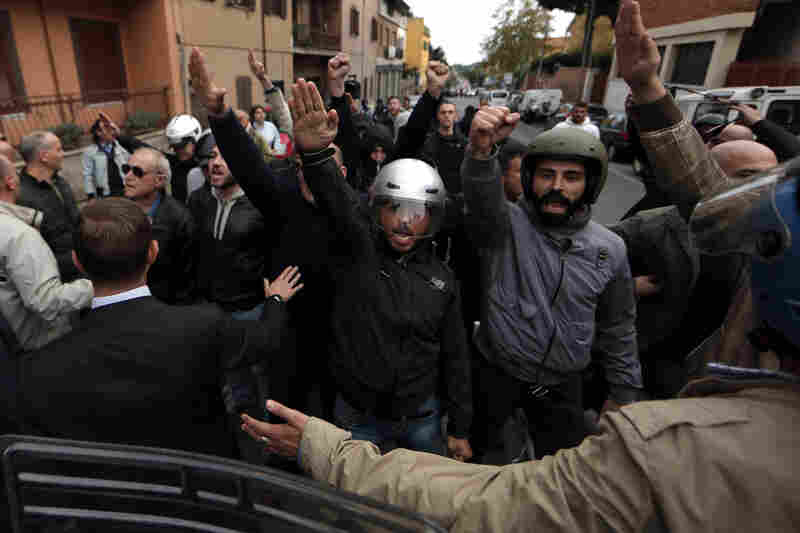 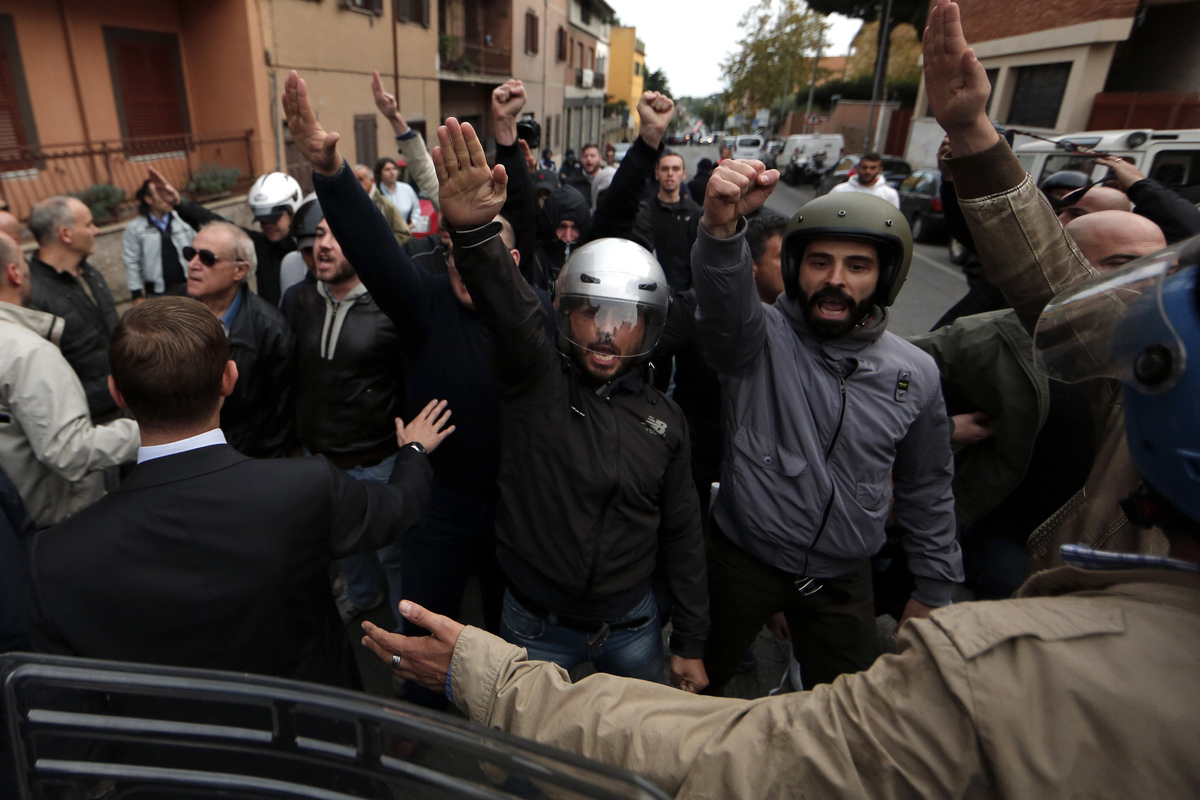 His death unleashed an emotional debate on what to do with his body. The mayor of Rome, Ignazio Marino, said a funeral for Priebke held in the capital would be an insult. The government of Argentina, where Priebke lived for 50 years as a fugitive, refused to allow his body to be returned. His hometown in Germany also ruled out burying him there, fearing his grave could become a pilgrimage site for neo-Nazis.

But a fringe Catholic movement, the Society for Saint Pius X (SSPX), which is not recognized by the Vatican, announced it would hold the funeral in its church in the small town of Albano Laziale, south of Rome.

The group opposes the reforms of the Second Vatican Council, particularly outreach to Jews, and several of its members are known Holocaust deniers. For example, Bishop Richard Williamson made headlines in 2009 when he claimed Jews were not gassed by the Nazis during the Holocaust.

But the SSPX did not take into account the townspeople's anger. Albano Laziale has been honored for its resistance to Nazism and fascism, and the memory of the horrors of the Nazi occupation is still vivid.

Mayor Nicola Marini tried to block the hearse's arrival, but the government prefect overruled the order. Hundreds of people, young and old, came out to protest. They shouted "executioner" and kicked the hearse as it arrived.

Meanwhile, the funeral announcement drew groups of Nazi sympathizers to the town; they came from other parts of Italy by train and bus, armed with helmets and chains.

Clashes broke out between the townspeople and the ultra-rightists, with police in riot gear trying to disperse them with tear gas.

Around midnight, tension was so high that the funeral was suspended and the coffin was put in an unmarked police van and taken to a military airport.

It's believed that the body was to be cremated, but it's not known where.

What is clear is that the entire incident could have been avoided if a quiet religious ritual had been conducted inside the home where Priebke died, as is common in such cases.

But by publicizing the funeral, it attracted Nazi sympathizers, Holocaust deniers and the like. And this happened as the country prepared for Wednesday's remembrance of the 70th anniversary of the Nazi and fascist roundup of more than 1,000 Jews from the Rome ghetto, who were packed into trains and shipped to Auschwitz. Only 16 returned to Rome after the war.

The Priebke funeral has highlighted a historical divide that still persists in Italy between anti-fascists and sympathizers of the fascist and Nazi regimes.

It's all the more ominous because it happens against a backdrop of growing extreme right-wing sympathies not only in Italy, but also in many parts of Europe.