Accessibility links
The Greatest Living Figure Of Chasidic Music The Modzitzer sect of Chasidic Judaism, which originated in the Polish town of Modzitz, is known for its beautiful melodies. Among the most emblematic and prolific composers in this tradition is Brooklynite Ben Zion Shenker — who, at 88, continues to create new works. 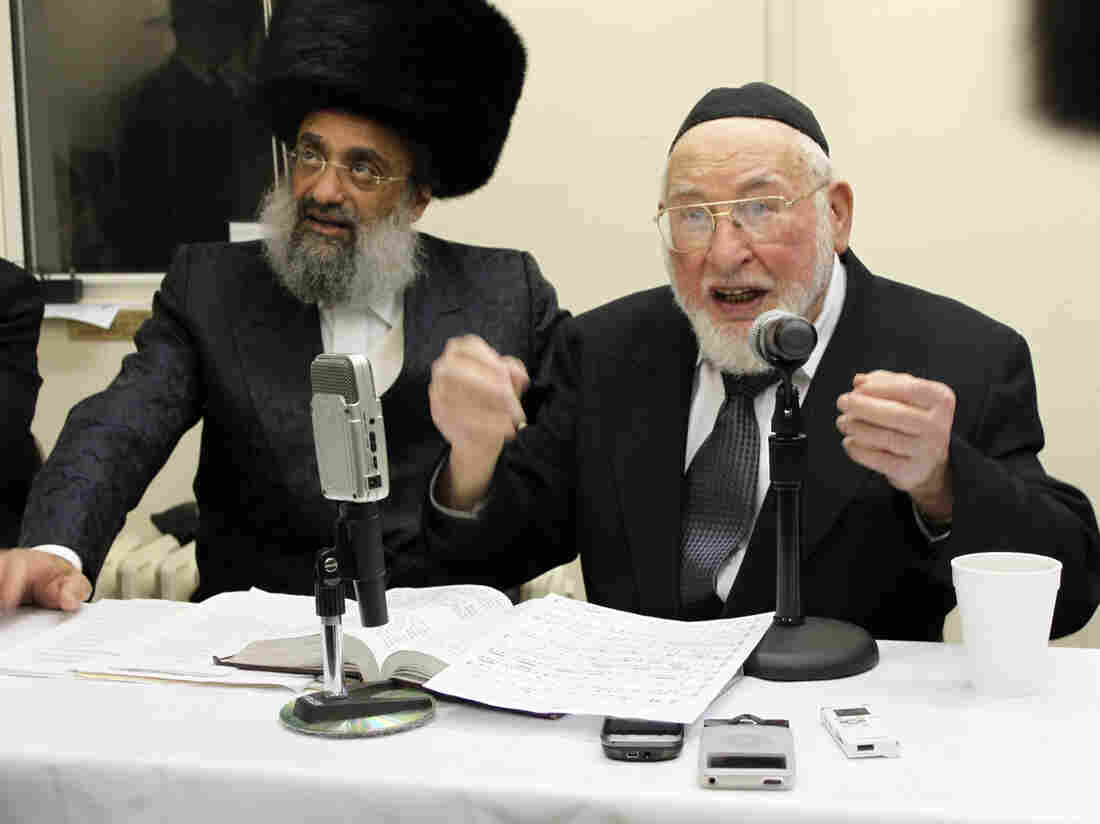 Ben Zion Shenker (right) is a world-renowned composer in the Modzitzer tradition of Chasidic Judiaism. Joel Lowy/Courtesy of the artist hide caption 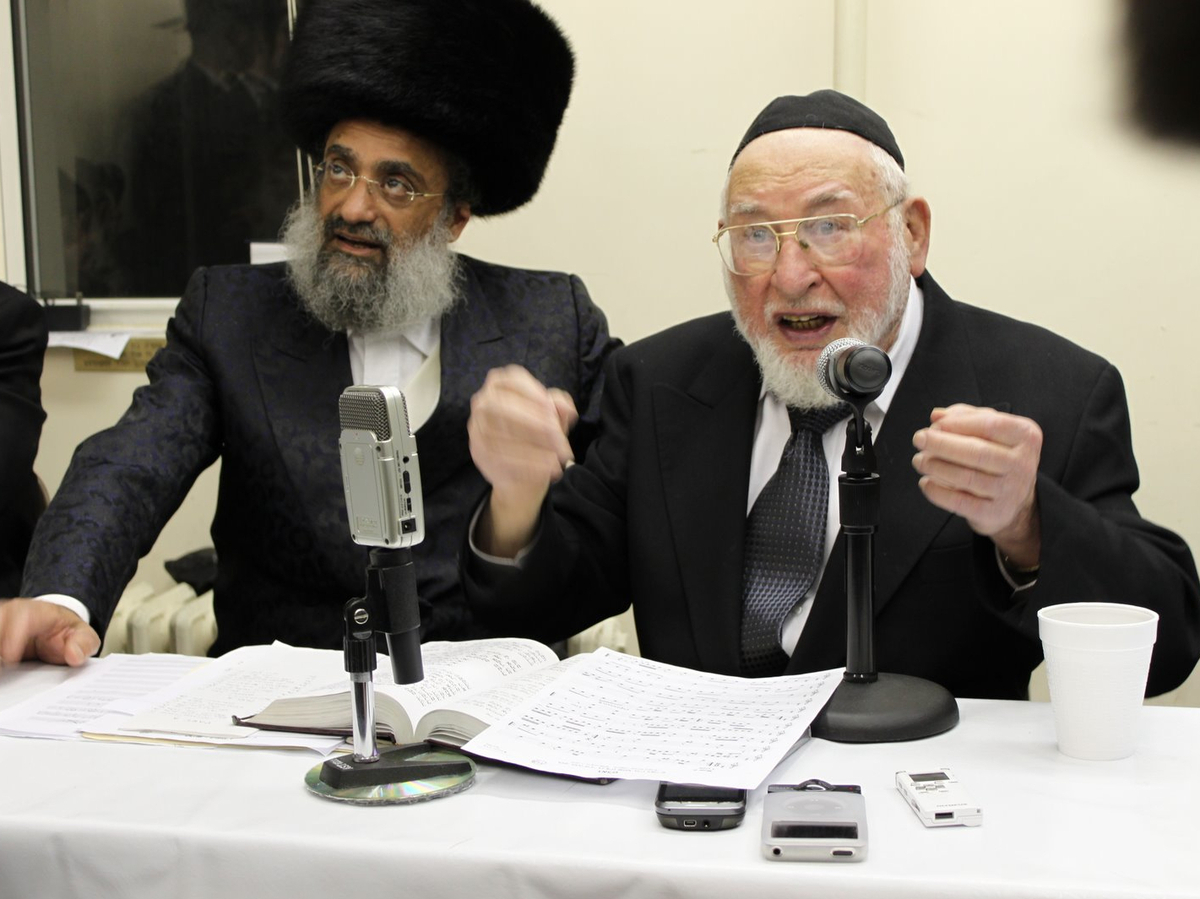 Ben Zion Shenker (right) is a world-renowned composer in the Modzitzer tradition of Chasidic Judiaism.

Joel Lowy/Courtesy of the artist

The role of music in Jewish life was elevated by a Polish rabbi known as the Baal Shem Tov, who is credited with founding the Chasidic movement in the 18th century. He taught that melody is one of the paths to divine service.

"One of the innovations of the Baal Shem Tov was to allow for greater musical expression during the prayers," says Rabbi Meir Fund, who leads his own congregation in Brooklyn. "And music became a very important ladder of ascent."

Over the past 200 years, a sect of Chasidic Jews known as the Modzitzers has become known for beautiful melodies — thousands of them. Modzitz is the name of the town in Poland where the sect eventually settled.

"There's a certain depth and aesthetic beauty in Modzitzer melodies that really defies words, but that sets Modzitz apart as the pinnacle of Jewish Chasidic music," Fund says.

By all accounts, the one living Modzitzer who has made the greatest contribution to music is 88-year-old Ben Zion Shenker. One of the most prolific and respected Modzitzer composers, Shenker lives in Brooklyn, N.Y.

Ben Zion Shenker tells the story of how his first choral teacher persuaded his parents to let him join a choir.

His connection to Modzitz began when he was a teenager. The Modzitzer rebbe, or chief rabbi, moved to Brooklyn as the Holocaust consumed much of Chasidic Jewry in Eastern Europe. On a Sabbath afternoon in 1941, the rebbe noticed Shenker humming Chasidic melodies written out in a book.

"The rebbe turned around and asked me, 'You know how to read notes?' " Shenker says. "I was all of 15 years old, and [he] couldn't believe that a kid of that age could read music. I said, 'A little.' After that, I became what you'd call his musical secretary, actually. Anything he composed, I used to notate. And he used to sing for me things that he had in mind."

Shenker had not only studied music theory; he also sang in a boys' choir and performed on his own radio show on a Yiddish station. A 13-year-old Shenker even made a record in 1938.

Shenker grew up to become an ordained rabbi. He made his living in the garment and jewelry industries while composing Modzitzer melodies — nigunim, as they're known in Hebrew — that are used throughout the Orthodox Jewish world.

Shenker composed a melody for the Psalm of David, also known as the 23rd Psalm. Orthodox Jews sing it during the third meal of the Sabbath on Saturday afternoon — the melody came to Shenker after he finished the third meal one day in 1946. His melody was later recorded by Cantor Yitzhok Meir Helfgott and violinist Itzhak Perlman. Shenker himself recorded the first album of Chasidic music in 1956. 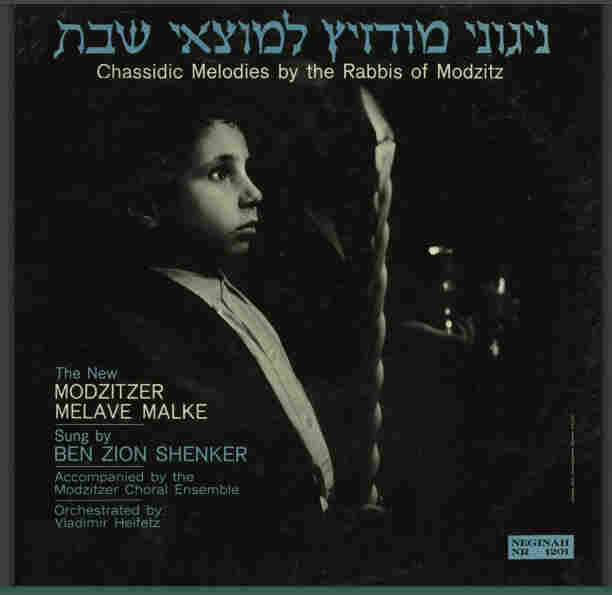 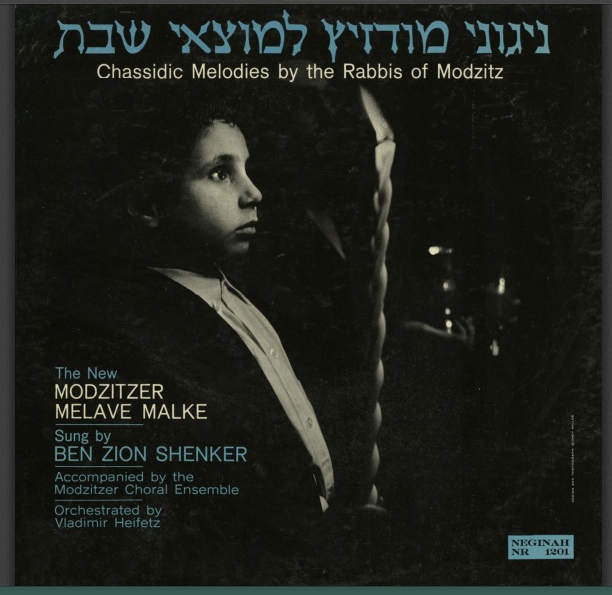 Hankus Netsky is chairman of the Improvisation Department at the New England Conservatory of Music. He says that Shenker realized the gravity of his work.

"He realized that these were like symphonies," Netsky says. "These were like some of the greatest compositions ever written, and that these were emblematic compositions for the Jewish people, and that's really where he wanted to put his efforts. ... He doesn't call attention to himself and yet, as soon as he opens his mouth, everybody turns around and says, 'What is that?' And it's his music that does it."

Though Shenker's music is largely unknown outside the Orthodox world, many Orthodox musicians take inspiration from it.

"In Modzitz, the melodies are so powerful that you can reach really deep meditative states, and it's also a way of purifying yourself," says klezmer and bluegrass virtuoso Andy Statman, who is a neighbor of Shenker's and worships with him in the Modzitzer synagogue. "This music is really set up for that."

Shenker served as the prayer leader in the Modzitzer synagogue in Brooklyn for more than five decades. He has stopped on the advice of his doctor, but he has in no way retired. During the recent holiday of Sukkot, he sang for two hours.

"I compose new material every year," Shenker says. "I made seven new songs this year for the text that we say on Rosh Hashanah and Yom Kippur. When those prayers come up, I'm the one that starts it, and the singing adds so much to the spirit of the prayers. I mean, when you sing it, you really understand it."

Shenker has composed some 500 nigunim, but he's particularly proud of a melody he composed 60 years ago for the proverb "Woman of Valor," which is sung in observant Jewish households as the Sabbath arrives on Friday night. Shenker says that when he walks home from the Modzitzer synagogue, he hears it sung in almost every Jewish home in his neighborhood.