WikiLeaks Gets A Hollywood Gloss In 'Fifth Estate'

WikiLeaks Gets A Hollywood Gloss In 'Fifth Estate' 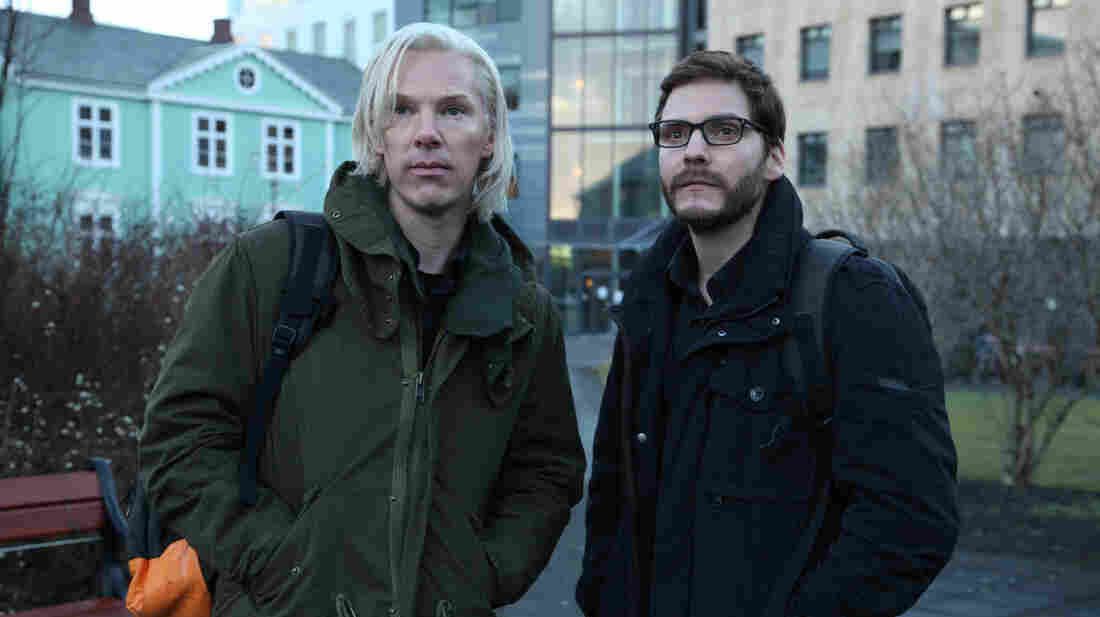 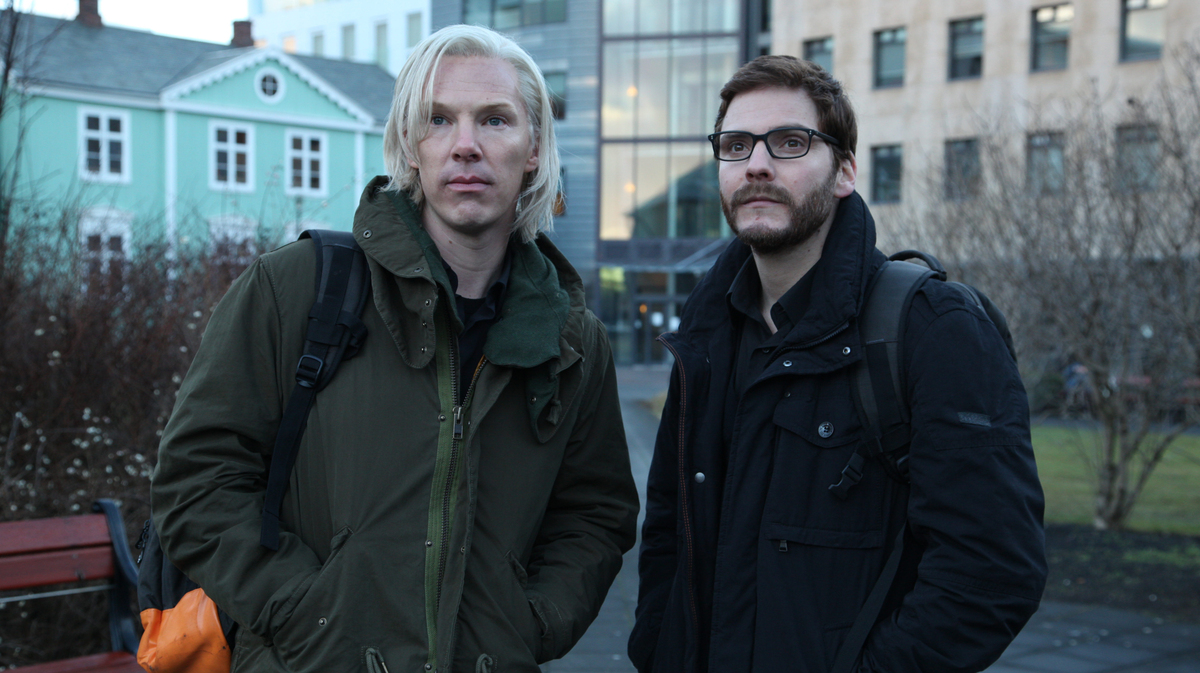 Benedict Cumberbatch (left), sporting the white-blond mop of the real Julian Assange, and Daniel Bruhl, who plays Daniel Domscheit-Berg, take on the story of WikiLeaks in The Fifth Estate.

Rated Rated R for language and some violence

The saga of Julian Assange and WikiLeaks is too large a data dump for a two-hour drama. Yet director Bill Condon seeks to complicate as well as simplify in The Fifth Estate, an entertaining if inevitably unreliable current events romp.

The opening credits present a pocket history of textual communication, from cuneiform to the Internet. Condon, who took a similarly breathless approach with Kinsey, is announcing that his subject is nothing less than how the Web transformed communication.

That is indeed one thread of Josh Singer's script, derived from two books on Assange and his organization. But the movie's spine is the relationship between the white-haired Australian (eerily embodied by Benedict Cumberbatch) and the author of one of those tomes, Daniel Domscheit-Berg (Daniel Bruhl).

The two meet at a 2007 hacker convention in Berlin, and Domscheit-Berg (under the alias Schmitt) quickly becomes WikiLeaks' chief lieutenant. Even he doesn't know that at first, because the self-dramatizing Assange claims to have many associates. But they, like much of the operation, are fiction.

Assange At The Movies

Documentary Introduces The Man Behind WikiLeaks

Documentary Introduces The Man Behind WikiLeaks

Intent on the title's conceit that the Web has supplanted traditional journalism's role as the "fourth estate" of civil society, Condon periodically presents WikiLeaks as a newsroom, sometimes busy and sometimes nearly deserted. When Berg realizes he's been electronically conversing with several pseudonyms for Assange, the place fills with multiples of a lank-haired, long-faced Cumberbatch. WikiLeaks, in style if not in substance, is The Matrix.

Angry at being deceived, Berg nonetheless remains with Assange and even recruits a friend and fellow computer savant (Moritz Bleibtreu). They and a few others expose political murders in Kenya, Scientology's esoteric doctrines, banking scandals in Iceland and Switzerland. In 2010 comes the classified U.S. information about military activities in Afghanistan, not to mention a quarter million State Department cables.

These massive releases bring WikiLeaks into a fraught alliance with three newspapers, personified on-screen principally by David Thewlis as a reporter for the U.K.-based Guardian. It also rattles the Obama administration, as embodied in composite characters played by Anthony Mackie, Stanley Tucci and Laura Linney. 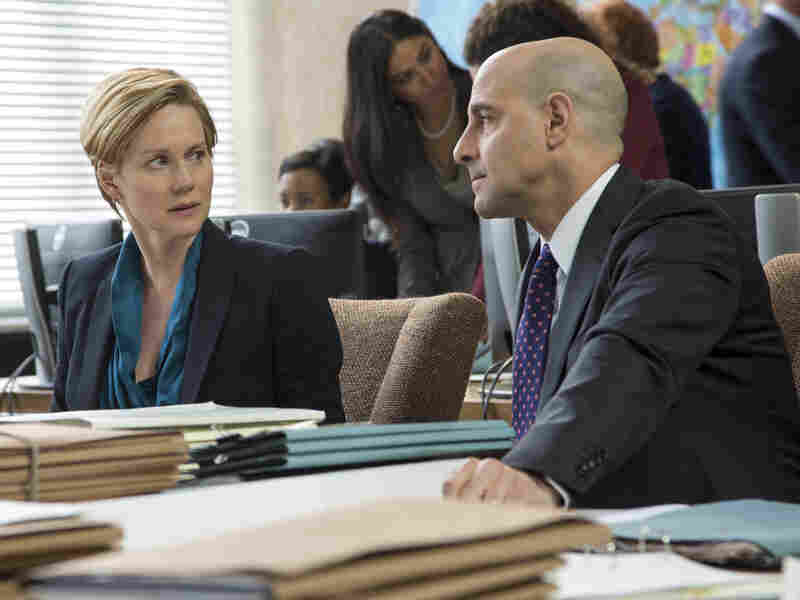 The film's core narrative is driven by the intense relationship between Assange and Domscheit-Berg, but it also ventures into a subplot involving U.S. officials (Laura Linney and Stanley Tucci) dealing with the consequences of WikiLeaks' disruptive data dumps. Frank Connor/DreamWorks II hide caption 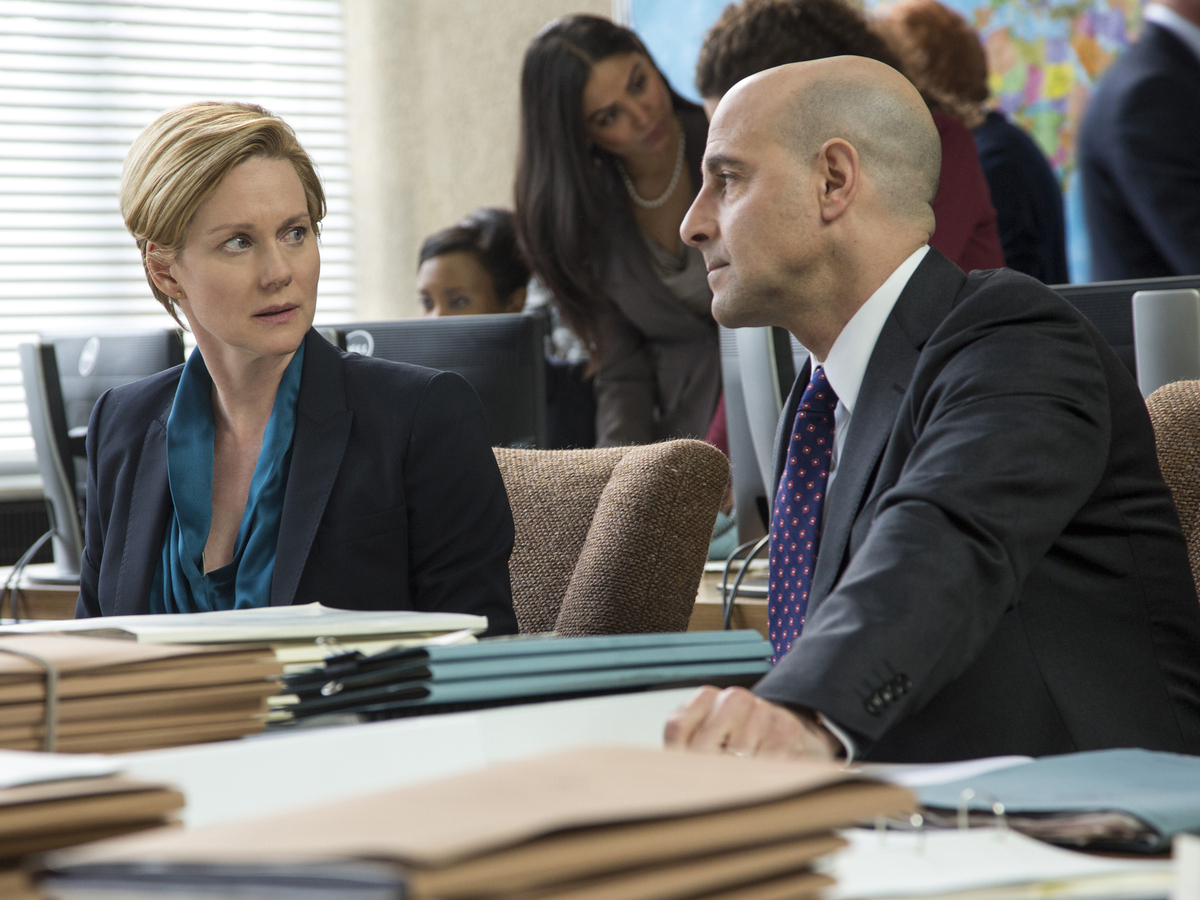 The film's core narrative is driven by the intense relationship between Assange and Domscheit-Berg, but it also ventures into a subplot involving U.S. officials (Laura Linney and Stanley Tucci) dealing with the consequences of WikiLeaks' disruptive data dumps.

In a subplot that attempts to illustrate the real-world effects of WikiLeaks' failure to redact documents, Linney's veteran diplomat hurries to extract from Libya a no-longer-confidential source (Alexander Siddig). But Cumberbatch's portrayal of a mercurial, megalomaniacal Assange conveys recklessness more pungently than this cinematic side trip to Libya.

Like most films that attempt to visualize the Internet's 0's and 1s, The Fifth Estate flashes letters and numbers on the screen, sometimes lashing them with simulated glitches. But the movie doesn't just strive to convey the speed of digital communication. It also sends its principal characters hopping from city to city, continent to continent, restlessly on the move. (One sign that this is a Hollywood product: Nobody gets stuck on the tarmac, or even has to wait for a taxi.)

The movie sketches its version of Assange's back story with rough strokes: several childhood years spent in an Australian cult, a teenage hacking adventure that took him into NASA computers and almost to jail. To comprehend this history lesson, it would help to read up in advance, or at least watch We Steal Secrets, Alex Gibney's Assange documentary.

Condon himself shifts to the documentary format at the end, offering quick notes on Assange's current situation — including the only mention of sexual assault allegations leveled against him — and short clips from an interview.

In one of these, the Wiki man denounces the movie he expects Condon to make. It might seem gracious of the director to let Assange end the film by damning it. But as The Fifth Estate excitedly illustrates, in the Internet age no one can ever really have the last word.